After the constitution, Kais Saied's next target: The unions

David Hearst
The stage is set for an almighty clash between Tunisia’s new Sultan and the unions, which after Ennahda is the only other organised mass movement Tunisian President Kais Saied leaves after voting in a referendum on his draft constitution at a polling station in the capital Tunis, on 25 July, 2022 (AFP)

There can be no serious dispute that Kais Saied’s seizure of power in Tunisia a year ago was a coup; that the document MEE published outlining what would happen two months before Saied's move was a genuine plan that he indeed carried out, and that Tunisia is now hurtling towards dictatorship.

Saied wants absolute power. Now. He regards himself as Sultan, a man who can see beyond the needs of the present, a ruler anointed by God himself

Not even the politicians who supported Saied a year ago, and have subsequently been burnt by him, would dispute that. Still less the unions who backed him, or indeed the impoverished Tunisians. His popularity has plummeted from over 80 percent to 22.3 percent.

Even the youth, who last year were so convinced that Saied would prove a new broom, are split.

Opposition to his attempts to gather all powers of the state in his hands without any checks or balances is widespread, and goes well beyond his main target, the moderate Islamist movement Ennahda, which remains the single largest political movement.

A year on, Saied is taking a significant step to setting his grip on power in concrete by forcing through a constitution which destroys all checks and balances on his rule by decree. Monday's referendum results, according to preliminary figures from the electoral commission, showed a low turnout of just 27.5 percent.

Saied appears to be the sole author of the constitution he has put to the vote. It had other authors, but Saied has bulldozed through his own text. Sadeq Belaid, the head of the advisory committee appointed by Saied to write the new constitution, rejected the final draft.

Belaid revealed that Saied made fundamental changes to the version submitted to him by the committee. Belaid was one of Saied’s closest associates.

The new constitution eradicates the 2014 constitution of Tunisia, which took two years and extensive consultation both locally and nationally to produce. It concentrates all powers in the hands of the presidency over the government, the judiciary, and the executive, thus destroying the principle of the separation of powers deemed essential to any other democracy.

To pass it, Saied has had to dismiss Tunisia’s election commission which did a good job in seven previous elections and put yes men in charge. Even to the last minute, Saied broke the rules which he himself set, rather like former British Prime Minister Boris Johnson. Saied was accused of violating election law by broadcasting a video on an official channel on voting day.

All but one party boycotted the referendum and there were no observers.

The results of such a sham are, therefore, going to be irrelevant. No doubt Saied himself will feign surprise at the result. But this will be a throwback to the worst years of post-colonial dictatorship in Africa and Latin America.

The Nation, the mouthpiece of the presidency in Kenya, feigned surprise when Jomo Kenyatta, a notorious authoritarian, was re-elected president . "Its Mzee!", the splash headline read as if the ruling party, Kenya African National Union (KANU), had not won every seat in every election from 1969 to 1988.

So it will be in Tunisia today.

The moment the official results come through, the constitution is confirmed. No minimum turnout is stipulated, such as the usual requirement that 55 percent of the population has to vote in favour.

Saied, a constitutional lawyer by training, does not care about details. He wants absolute power. Now. He regards himself as sultan, a man who can see beyond the needs of the present. A ruler anointed by God himself. There have been many of those in the past, and such messianic missions almost always end badly.

The frontline of the resistance to dictatorship is being manned by Tunisia’s brave judges. This is a surprise, but it represents progress of sorts. It was not so under Habib Bourguiba and Zine El Abidine Ben Ali, where the courts were an all too subservient arm of the presidency. But Saied’s former colleagues in the legal profession are having none of it. 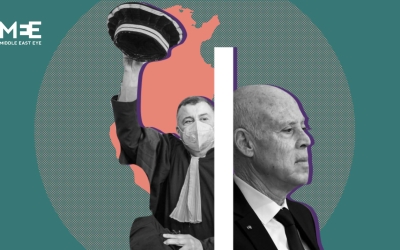 Not all of them. Some are prepared to accept what in Soviet times became known as "telephone justice", when judgments were phoned into the judges by the unseen hands of the party.

The judges' union staged a month-long strike in protest at the sacking of 57 of their number. Saied had accused them of corruption and protecting terrorists, but his criterion for anyone who protects terrorists is notoriously loose; it's any judge who disobeys his orders.

A new list of the disobedient - or independently minded - judges is being drawn up, on which will be included the judge who dismissed the trumped-up money laundering case against Rached Ghannouchi, the former speaker of parliament and head of the Ennahda party.

The claim that Ghannouchi accepted money from foreign governments and laundered them through another organisation acting as a front originates with a British journalist, whose fame was widespread in the Middle East but whose reporting could prove as flawed as it was brilliant.

The late Robert Fisk published the claim that Ghannouchi had been offered significant sums of money from the emir of Qatar on the eve of elections. His source was then Syrian foreign minister, Walid Muallem, who was next in line in the queue for the emir’s audience.

Ennahda sued and won. The Independent had to pay up and issue a fulsome apology. "We wish to make it clear that Mr Ghannouchi and his party have not accepted any donation from a foreign state in breach of Tunisian party funding laws. We apologise to Mr Ghannouchi."

Other Arab newspapers that repeated the claim were sued, lost and dodged the fines, one by reformulating its company in London.

Last week, the investigating judge would have none of it. The prosecution alleged that Ghannouchi had links with the Namaa Tunisia Association, which has been accused of money laundering.

The judges refused to accept the prosecution’s demand to arrest Ghannouchi while he was still under investigation, but the case itself continues. After a nine-hour hearing, the judge let Ghannouchi go free, although he continues to be investigated for other claims.

There were other disturbing features to the case. Why was it heard in an anti-terrorist court rather than one that deals with financial misdeeds? Even if the case were proved, it has nothing to do with terrorism.

If the prosecution had succeeded this time round, the story would have been easy to sell to Tunisians. It goes like this: "The shortage of basic foodstuffs has nothing to do with me. There is a conspiracy in the country to create these shortages and these dark forces are plotting against good people like you and me."

This is how Saied thinks and talks to the people who elected him. It's delusional, deeply mendacious, and criminally irresponsible given the depth of poverty and unemployment in the country.

Fewer and fewer Tunisians believe him.

Ennahda is growing stronger. Members are rejoining, and Ghannouchi himself is quite prepared to do what would be for him a third stint in prison. He was imprisoned under late presidents Bourguiba and Ben Ali.

Once again, Tunisia is showing by example how unfit their European neighbours are. They really do want to crush the Arab Spring

Ghannouchi’s imprisonment would be a message to all political parties that there is no room for political pluralism. Ghannouchi’s close aides say it would strengthen Ennahda, not crush it.

The sky would also not fall in on the National Salvation Front which the Islamists have formed with nine other parties and civil society groups. Its leader Ahmed Nejib Chebbi is no Islamist, but he can distinguish between political differences and democracy itself.

With the leader of Ennahda cleared out the way, Saied’s next target would be the unions.

With a gross national income of $45bn in 2021 and a 36bn dinar (almost $12bn) shortage in basic commodities, Tunisia’s public finances are going to hit the buffers very soon. Dribbles of cash are arriving from the Gulf and the EU, but Saied’s only hope is reaching a deal with the IMF, which will surely demand a high price for its bailout, as it did in Egypt.

The IMF will demand subsidy cuts and redundancies of public sector workers.

Noureddine Taboubi, the secretary general of the UGTT, has already had one clash in the courts over attempts to rule his third term in office illegal, and has had one attempt at a general strike. In the referendum, the UGTT was careful to walk a tightrope of condemning the constitution, but allowing members to vote with their conscience.

Already it will be impossible to tell how many Tunisians followed the calls for a boycott and how many simply stayed away from the polling booths. The stage is set for an almighty clash between Tunisia’s new sultan and the unions, which after Ennahda is the only other organised mass movement.

Tunisia’s hard-pressed democrats will not expect a word of help from the self-declared bastions of democratic behaviour - the US and the EU. They have mouthed deep concern over what Saied is doing, while straining every sinew to avoid calling it a coup.

They followed the same playbook in Egypt and would have done the same in Turkey had the coup attempt there succeeded. But once again, Tunisia is showing by example how unfit their European neighbours are.

They really do want to crush the Arab Spring and Tunisia’s democrats are its last withered shoots. 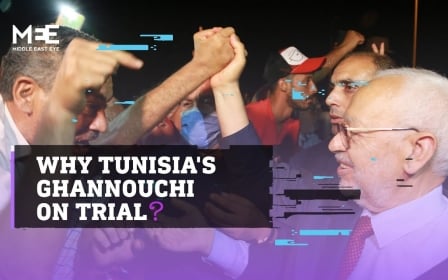 Tunisia Politics
Why is Tunisia's Ghannouchi on trial? 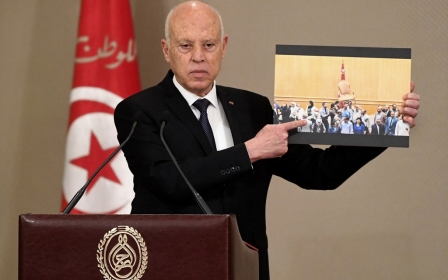