Turkish witch-hunt against the Gulen movement lacks one thing: Evidence

Ismail Sezgin
Fethullah Gulen and his movement are being purged not for terrorism, but for being unwilling to mindlessly follow the new elite 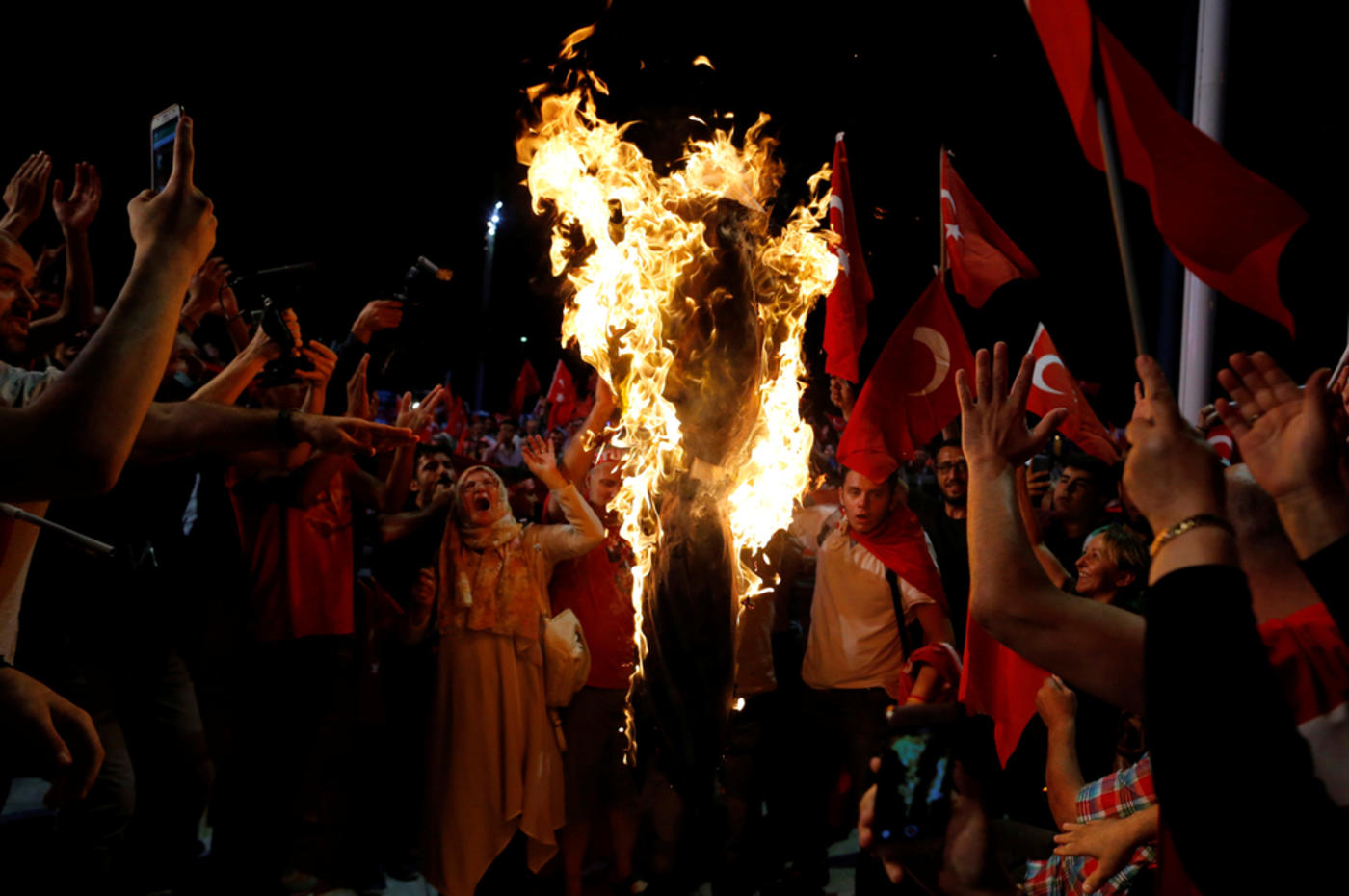 Turkish President Recep Tayyip Erdogan declares that the 15 July coup attempt was orchestrated by the Islamic cleric, Fethullah Gulen. Yet, there is little concrete evidence against Gulen.

Instead, the government has accelerated purges of public and private sector employees, arrests, and seizures of citizens' property without legal process. In no other country could the practice of guilt by association used in Turkey now be seen as “protecting democracy”.

The trajectory is not new. In December 2013, when corruption allegations claimed four government ministers and his own family members were directly involved in bribery and corruption, Erdogan called it a “coup to topple the government”.

He accused Gulen of coordinating the investigations, and the police force was purged. Since that event, Gulen has been the scapegoat for every setback, including the failed coup, about which little is known. Who organised it? Who gave the orders? What did they have in mind if they had succeeded?

The Gulen movement and its goals

Gulen’s stated aim is to raise a better educated generation which is able to negotiate and solve the problems of society through peace rather than conflict.

The term he uses is “the golden generation” - borrowed from Aristotle’s “golden mean” - and is used to indicate people able to make ethical, balanced (“golden mean”) decisions for the betterment of society, not for selfish aspirations.

The people in the movement assume that they are responsible for contributing to society by solving the problems of ignorance, poverty and discrimination through education, dialogue and charity activities and to fulfill their responsibility towards God in this way.

Readers may incorrectly assume that a faith-based movement is opening madrasas. But that is not the case. The movement prefers to open secular schools that are inclusive and open to students of all backgrounds and religions with an emphasis on academic excellence.

It began opening such schools in Turkey first and then expanded these schools into central Asia with the collapse of the Soviet Union.

This approach was very much welcomed by Turkish people generally. It also made the Hizmet movement “different” from other religious groups; it created an expectation and capacity to respond to needs in other parts of the world. The learning experience also helped broaden the participants’ horizons and the Turkish public’s interest.

The principle of service to others continues to direct the movement's global drive in education, dialogue, health services and poverty relief, but its global nature forces the movement to be more principle-based - as opposed to nation or culture - so it can operate everywhere easily.

Coming together - and falling out

Gulen has never declared himself an ally of any political party, but he has held some political positions: pro-EU, pro-democracy and for human rights. He believes secular democracy allows Muslims to practice their religion freely.

The Justice and Development Party (AKP) was founded on the idea of rejecting identity politics and embracing EU accession and reform, stronger economy, fewer ideological confrontations and more justice and transparency.

In that, the AKP came closer to Hizmet rather than vice versa. During AKP’s first two terms, it gained the support of many including social democrats, some notable liberals, religious minority groups in Turkey, conservatives and was endorsed by the EU and the US.

Similarly, the majority of Hizmet participants and its media also supported AKP’s democratising policies during this period.

Erdogan promised a civil constitution in his third term, but there was huge disappointment in society in general and in Hizmet when the AKP failed in the task.

Later, when news of the corruption investigations broke, Erdogan blamed the movement, and went for another election. In this election he promised to “eradicate" Hizmet because they tried to “topple the government”.

In the absence of effective political opposition, Erdogan won the elections with an increased share of the vote, and the movement remained a scapegoat.

Politics of fear and loathing

The movement is now trapped in a pincer movement by the so-called religious right and the would-be democratic secularists in Turkey. Both accuse movement participants of “infiltrating” state institutions.

Indeed, “infiltration” is a term originally employed by the authoritarian Kemalist elite systematically to exclude the elements of society viewed by as “marginal” or antipathetic to the Ataturkist vision of the republic from positions of power or responsibility in the state.

Thus their presence, particularly in the military, has always been referred to as “infiltration” - an indication of “enemy” agents secretly penetrating the Kemalist stronghold.

It seems that Erdogan, seeing himself now as the owner of the centre and rule maker for the republic, has adopted the term, so other elements can only “infiltrate” this system.

But in a democracy, all citizens have the right to participate in all state institutions equally. If they are in some way subverting those institutions, failing to abide by their contract of employment, certainly they should be held to account individually in a court of law. If they are conspiring to subvert them, that too is a legal matter.

Furthermore, subversion - which the Gulen and the movement have been accused of - is not terrorism, which is the use of violence for political ends. So the accusations for both must be proven.

So far, there has been no evidence, no investigation and no trial. There have been mass arrests, deaths in custody, torture, death threats, sackings, seizures of property, detention of family members, and, increasingly, the language of genocide used about people in the Hizmet movement.

Ironically, many of the people being dismissed and arrested now were actually appointed or employed by the AKP and their acolytes. They are being purged not for terrorism, but for being unwilling to mindlessly follow the new elite. They are being taught to fear.

And if you want to know how biddable or credulous one must be, take heed of Ahmet Davutoglu, who was deposed by Erdogan a year after winning 50 percent of votes at the general election.

Who was behind the coup?

The chain of command in the attempted coup is still not clear after almost four weeks. Who was the putschists' commander? Who organised the coup? Who gave the orders? If ever we have reliable evidence, we will be able to discuss it meaningfully.

Thousands of police officers, judges, prosecutors, and civil servants have been purged since 2013, and many Gulen-inspired institutions have been seized or closed down; it might be realistic to expect some individuals from among them to have taken part in the coup attempt.

Yet, there was no sign of mass involvement. This tends to support the view that Gulen movement participants are committed to non-violence even in the face of persecution.

The published “evidence” so far is flimsy. There is a confession from General Staff Chief Hulusi Akar's aide Levent Turkkan. It ends: “I have written this in my handwriting while waiting” but the picture clearly shows both his hands are severely injured, his ribs are broken and his face covered with bruises.

All other news has been “filtered” through the few pro-government media outlets left after a thorough media purge.

It is reported that Akar stated that one putschist wanted to put him on the phone with Gulen, but the officer in question denied this. General Akar, whose involvement in the coup remains unclear, is a strong secularist and has a motive to comply with Erdogan’s narrative.

The statements by the rest of the generals are so contradictory that it leads one to believe that at least four out of five are false, if not all.

There is evidence that three engineers who took part in the coup have worked in Gulen-inspired institutions. It is still not clear, however, whether they took part willingly or under duress.

There was also a police officer in military uniform who was dismissed in 2014 because of an alleged Gulen connection. He had been cleared in court, but despite the court order, was never reinstated. He is reported to have “killed himself” in custody.

Erdogan announced Gulen's guilt even before the coup had been thwarted. He was asked about Akar’s situation in the same press conference on the night of the 15th and he replied, “I don’t know”.

How could he be sure who was responsible before he knew who was involved? And what do we expect of a judicial investigation whose central purpose of determining the culprits has already been pre-judged?

It is, however, consistent in terms of Erdogan’s narrative. He has blamed Gulen and the Hizmet movement for everything in the past three to four years. This includes the original corruption allegations, rising inflation, interest rates and even the dispute over the downing of a Russian jet. However, he has also been consistent in failing to prove any of his accusations.

Gulen and Erdogan have their differences when it comes to politics and Erdogan abuses the situation to increase his political power. He has used the Hizmet movement as a scapegoat to evade corruption allegations.

Now he is using the same narrative to reform the army, judiciary, bureaucracy, civil society and media in Turkey. By the time the dust settles, Erdogan will have finished transforming society with the help of the controlled and homogenised media in Turkey.

- Ismail Sezgin is the director of the London-based Centre for Hizmet Studies. He has a doctorate on Gulen’s philosophy, follows the Hizmet movement and its work closely as part of his academic interests, and comments about it regularly.

Photo: Supporters of Turkish President Tayyip Erdogan shout slogans over a burning effigy of US-based cleric Fethullah Gulen during a pro-government demonstration at Taksim Square in Istanbul on 20 July 2016 (Reuters)