Ameer Makhoul
While continuing its campaign of repression and dispossession in Palestine, Israel is marketing itself to the UAE - and to the world - as a technological leader Israel is participating in Dubai’s Expo 2020, which opened on 1 October - almost a full year later than planned due to the Covid-19 pandemic. The massive world fair, which aims to showcase key technological innovations, comes a year after Israel normalised relations with the UAE and several other Arab states.

Millions of people are expected to visit Expo 2020, including high-profile figures in business, trade and information technology from around the globe. Israel expects 15 million people to visit its pavilion alone. Scores of Israeli companies have contracts and agreements in the UAE, with bilateral trade reaching $600m in the first half of this year.

Amid an ongoing push for annexation and settlement expansion ... Israel still has the audacity to speak about 'no walls and no borders'

Israel’s pavilion, which bears the slogan "Towards Tomorrow", harkens back to the words of former President Shimon Peres, who used imagery of "our mutual tomorrow" to steer public focus towards the future. Such language invites Palestinians to forget the past, rebuffing their right to the land that was taken from them. Israel wants Palestinians to forget the Nakba, Israel’s ethnic cleansing and looting of their homeland, and to enjoy “Israel’s future”. At the same, it wants the Arab world to forget Palestine.

A promotional video for Israel’s Expo 2020 exhibit stresses that the pavilion’s design was inspired by the concept of "no walls and no borders". And yet, Israel’s walls and borders continue to gobble up the land of Palestine, tearing it apart from the Galilee to Hebron, and from Gaza to the Jordan Valley.

This contrast could not be more evident than it is today, as Israel continues a horrific ethnic cleansing process facilitated by terrorist settlers, who are protected by the occupying state and its army. This settlement project has decimated Palestinian properties, homes and livestock across the occupied West Bank.

Israel’s separation wall and bypass roads not only disrupt the geographic contiguity of Palestine, but are also deeply rooted in Zionist ideology, adopting the “wall and tower” approach as an affirmation of the military, settler-colonial nature of Israeli colonies in Palestine. And yet, amid an ongoing push for annexation and settlement expansion that has effectively stymied any prospects for a future Palestinian state, Israel still has the audacity to speak about “no walls and no borders”.

Beyond simply participating in Expo 2020, Israel is also entrusted with securing the fair after the UAE contracted Airobotics, an Israeli drone company, to bolster security. A fleet of drones will carry out systematic and continuous monitoring throughout the event. 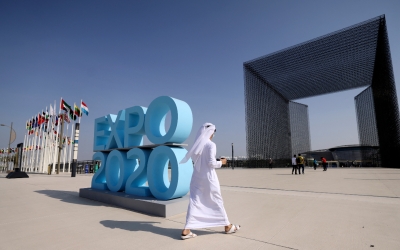 In promoting and marketing itself and its companies at Expo 2020, Israel is adopting the so-called soft power strategy. But there is another dimension to the Airobotics deal: Israeli drones represent one field of strategic cooperation between the UAE and Israel in the face of the so-called “Iranian threat”. Such cooperation preceded the Abraham Accords and was strengthened after their signature.

The use of fully autonomous weapons, known as “killer robots”, is an emerging global field, and the coming years are expected to witness major transformations in this area. Israel can leverage events such as Expo 2020 to promote itself as a superpower in this field. In the UAE, it finds a wealthy market - one with which it has already collaborated in a number of fields, including on a pipeline project that has been touted as paving the way for a potential alternative to the Suez Canal.

Behind the elegance of marketing and the strategy of soft power, Israel is continuing its relentless efforts to eliminate the question of Palestine and the rights of the Palestinian people. Behind its marking of aggression tools, Israel aims to impose its hegemony over the entire Arab region. 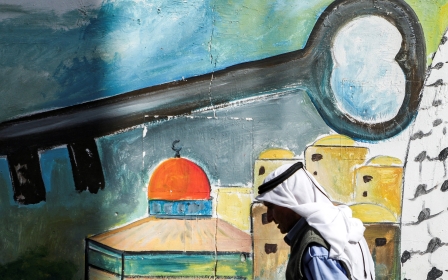