France doesn't need any help from Britain in policing Muslims The UK government, it seems, is once again exporting its Cold-War-inspired propaganda – this time to France, according to documents seen by Middle East Eye.

The Research, Information and Communications Unit (RICU), which is based at the Home Office in London, has sought to “effect behavioural and attitudinal change” among British Muslims through various platforms, including social media and film - all the while failing to disclose the British government’s involvement in such campaigns. And it’s all in the name of countering terrorism.

While the details of RICU’s operations in France are still unclear, other documents seen by MEE highlight that a key demographic target for its work is Muslims - mainly men, between the ages of 15 and 39. 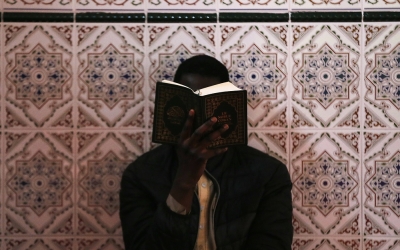 If the nature of the project is similar to what has been done in the homelands of many of the Muslims who live in France, it will involve covert methods of supporting governments to influence public opinion.

In the cases of Tunisia, Lebanon and Morocco, the British Council stated that it had “succeeded in creating a platform where government and civil society can communicate more effectively to strengthen resilience and reduce radicalisation and recruitment by violent extremists”.

One has to wonder how - given the French context - a project such as this can be launched. In France, the state’s hostility towards, and overt isolation of Muslims, migrants and people of colour are well known.

The republic has shown throughout history that it is not interested in integrating Muslims; they are parked in ghettos outside of France’s main cities, openly discriminated against at work, and pushed out of education and the public sphere by bans on hijabs and other religious symbols.

The “liberty, equality and fraternity” of the French state, and its aggressive, secular application of national values, are often depicted as being in direct opposition to Islam, and therefore to its Muslim population.

On the other hand, the UK’s counterterrorism practices attempt to shape religious identity among Muslims, pushing the notion of the “good” British Muslim who bows down to the state. Unless RICU’s work seeks to strip them of their Muslim-ness entirely, it is thus difficult to imagine the French government launching a campaign about “French Muslims” who espouse the republic’s values.

Vowing to resist political Islam, Macron noted: “We are talking about people who, in the name of a religion, pursue a political project.” He also called for greater control of international funds that some organisations receive and the maintenance of the 1905 law on secularism.

His statements said it all. French secularism today is an open war on Muslims, their political life, and their place in the republic. It’s hard to see how this can be softened through cultural and media intervention.

This war on Muslims is not only carried out rhetorically or through the law, but also via a large apparatus of physical repression, again justified under the cover of the war on terror. Since the 2015 Paris attacks, Islamophobia has continued to rise at an alarming rate, with a government that continues to legitimise the hatred.

The French state seeks to further marginalise an entire community and to use them as scapegoats when its own chickens come home to roost. Its counterterrorism methods are rooted in a desire to install a further divide between French society and Islam - the outcome of which will mean continued violence against Muslims.

RICU’s work will likely further institutionalise racism in France, just as the Prevent agenda has done in the UK

It is perhaps unsurprising that Macron’s speech on Muslim communities was also a response to the Yellow Vests and his plans to “deal with them”. Dissent, political expression and social justice movements are effectively being treated as acts of terror.

RICU’s work will likely further institutionalise racism in France, just as the Prevent agenda has done in the UK, while attacking the civil rights of all. The question remaining now is, how?

Will it do so - as we have seen in the UK and throughout the MENA region - by surreptitiously mobilising music, art and social media to normalise state repression and exclusion? Or will it do so in altogether new and different ways?

Either way, this is bad news for Muslims in France and everywhere.