Lara Nelson
Despite its principles, the UN has allowed the regime to starve and then evacuate civilians in truces considered by many to be 'ethnic cleansing' 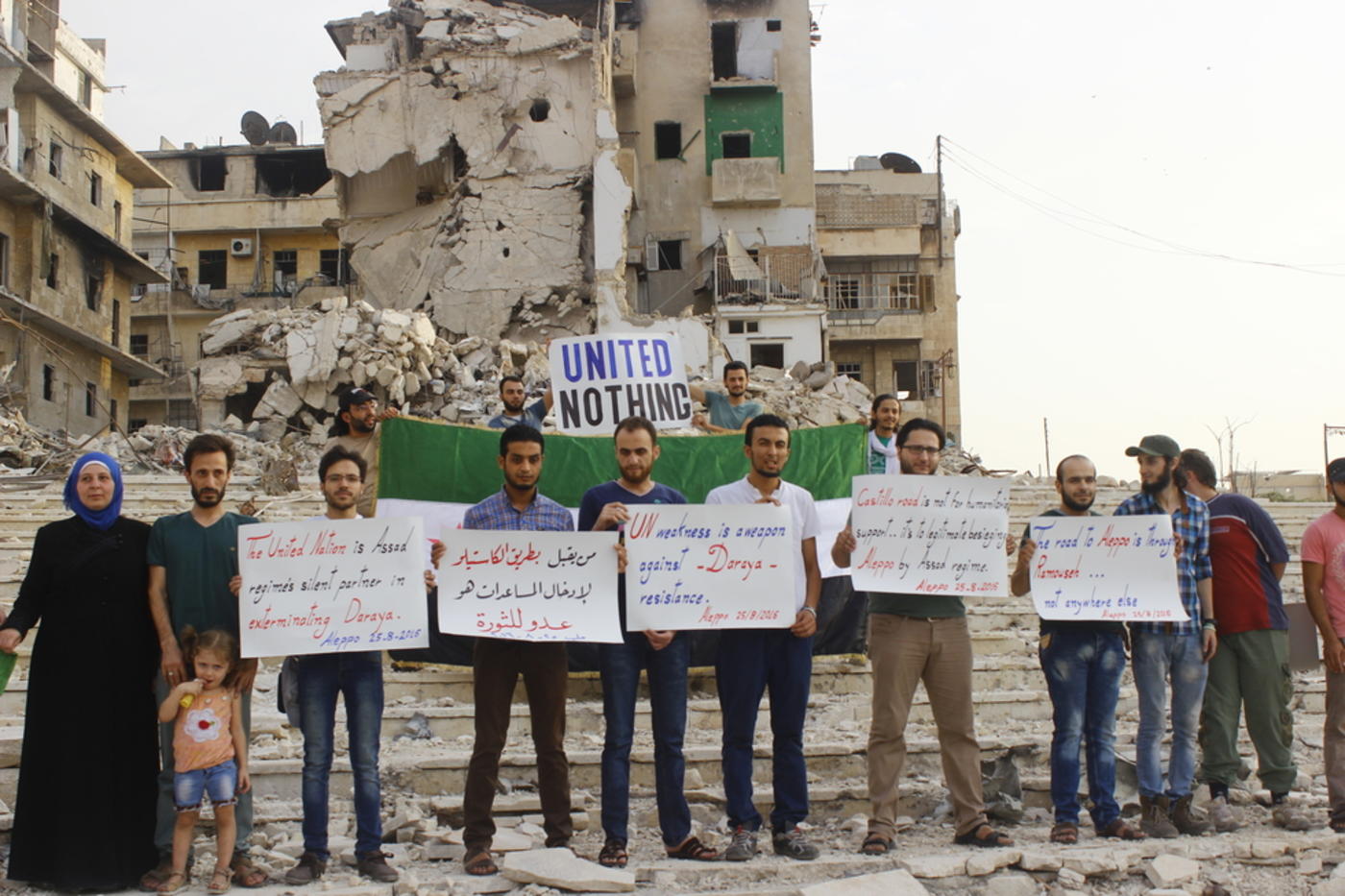 “The United Nations is the Assad regime’s silent partner in exterminating Daraya,” read a sign held up by residents in front of the bombed out remains of a house.

The Damascus suburb of Daraya was subject to a tight regime siege for nearly four years during which 9,017 barrel bombs containing explosives and shards of metal were dropped on the town from regime helicopters, for this reason the town was dubbed by the UN as “Syria’s capital of barrel bombs”.

Daraya had around 8,300 civilians, in addition to 1,200 fighters from the moderate Free Syrian Army (FSA), earlier this year.

The town was a model of what a future democratic Syria could be: despite starvation and incessant barrel bombs, Daraya’s local council acted as the government - running city services, working side-by-side with the FSA in the area.

Yet rather than working with the local council, the UN chose to work with the party that was dropping the barrel bombs. At every stage of the process, the UN consented to the regime’s wishes for Daraya, only allowing in minimal aid and finally guaranteeing the evacuation deal that saw the population moved out of the town.

The Assad regime is responsible for over 90 percent of the sieges in Syria, and despite UN Security resolutions authorising aid to be delivered “across conflict-lines,” the UN has capitulated to the regime’s strategy by only entering areas where it is permitted.

The UN’s role has not been to cross the lines and feed those in need, but to capitulate and facilitate the regime’s starvation and forced displacement strategy

Data shows that around 96 percent of aid goes to regime areas while only 4 percent goes to opposition areas. As a result, all deaths from starvation in Syria have happened in opposition-held areas. Government areas are strengthened while opposition areas wither and starve under the constant rain of barrel bombs.

This self-confessed “starvation-until-submission” strategy often culminates in local truces, readily mediated and supported by the UN. Scenes of starved civilians trudging out of towns reduced to piles of rubble, accompanied by shiny white UN vehicles, are familiar scenes.

The UN’s role here has not been to cross the lines and feed those in need, but to capitulate and facilitate the regime’s starvation and forced displacement strategy.

In Daraya, it was revealed that the UN was involved for two months of negotiations over the evacuation deal, despite denying its involvement. In his first interview after the evacuation, Abu Jamal, the FSA leader of Daraya confirmed that the UN’s presence as a mediator or guarantor was a condition for the deal going ahead, despite the UN’s insistence that it was “not consulted or involved in the negotiation of the agreement”.

Many consider these evacuation deals to be “ethnic cleansing”. Shia families moved into Homs after the 2015 deal and Zabadani is thought to be moving the same way.

The first picture I saw after the evacuation of Daraya was of an Iraqi Shia militia commander leading prayers amongst the rubble of the town.

Footage later emerged of markets of looted civilians belongings being sold in the streets. Assad himself was filmed walking through the town on the first day of Eid surrounded by a huddle of ministers.

A culture of capitulation and compliance was born at the beginning of the 2011 revolution, when the regime threatened to withdraw staff visas if the UN attempted to deliver aid to Daraa. The UN complied, and, from this date, a modus operandi was set and UN OCHA’s principles of neutrality, impartiality, operational independence, and humanity have been scrapped.  Like a beaten wife, who puts up with the abuse she gets for fear of losing everything, the UN has conceded all its principles to remain in Syria.

The list of scandals are telling: UN documents were revealed to tone down starvation in the country after being sent to the government; the wife of the Deputy Foreign Minister, Shukria Mekdad, was hired by WHO as a consultant on the mental health of the displaced, and most recently, it was revealed that the UN awarded tens of millions of dollars of contracts to regime organisations and individuals who are on sanctions lists, including $8.5m to a charity founded and chaired by Assad’s wife.

As a result, 70 aid groups suspended cooperation with the UN, saying Assad has gained “significant and substantial” influence over the relief effort in Syria. Meanwhile, airdrops proposed by the International Syrian Support Group with a deadline of 1 June, were deemed by the UN as “not possible” in opposition areas.

In 2009, two years before the beginning of the crisis in Syria, the UN admitted its mistakes in Sri Lanka, where its insistence on working through the government compromised its work entirely. Yet only two years later, the story of Sri Lanka was now being repeated again in Syria on an unimaginable scale.

These councils are supporting life in these areas and are effectively implementing the “transition” on the ground that was long promised by the international community, but has never been delivered

The UN has not always been like this. In Yugoslavia in 1994, it robustly stood by its humanitarian principles, confronting the Bosnian Serb leader Karadzic on his use of starvation as a weapon of war, and not waiting for permission, delivered aid across conflict lines.

Alternatives to working with the regime exist in Syria. All opposition areas across the country are run by local councils and organisations which support their local communities and Daraya was a shining example of this.

The two times that the UN did bring small amounts of aid into the city, it coordinated with this council. When the negotiation deal was brokered, it was the civil council, with military representatives that negotiated the terms of the deal, which saw the FSA safely move to Idlib while the civilians were resettled in rural Damascus.

With what they have, in the dire conditions within which they are functioning, the councils are supporting life in these areas and are effectively implementing the “transition” on the ground that was long promised by the international community, but has never been delivered. Of course the regime says no to the UN supporting and working with these local councils: they are the roots of a new democratic Syria.

In contrast, the dark contradiction remains that the organisation built on respect for human rights is bent to the wishes of a regime that is guilty of the most egregious war crimes - from chemical weapons, cluster bombs, barrel bombs, white phosphorus, and napalm, to torture on an “industrial scale,” the systematic “extermination” of detainees, and mass displacement.

Ten days before the evacuation of Daraya took place, incendiary bombs, described by locals as “napalm” were dropped from regime helicopters on the only hospital in Daraya, burning it to ground. This is the face of the “government” which the UN insists to continue working with.

The UN clings to its obligation to work with the sovereign government of Syria, yet is there not a point, when a country abandons its duties to protect its own people, when a government forfeits its sovereignty? Nearly 95 percent of the civilians killed in the Syrian civil war are killed by government forces, but of course the UN stopped tracking the death toll years ago.