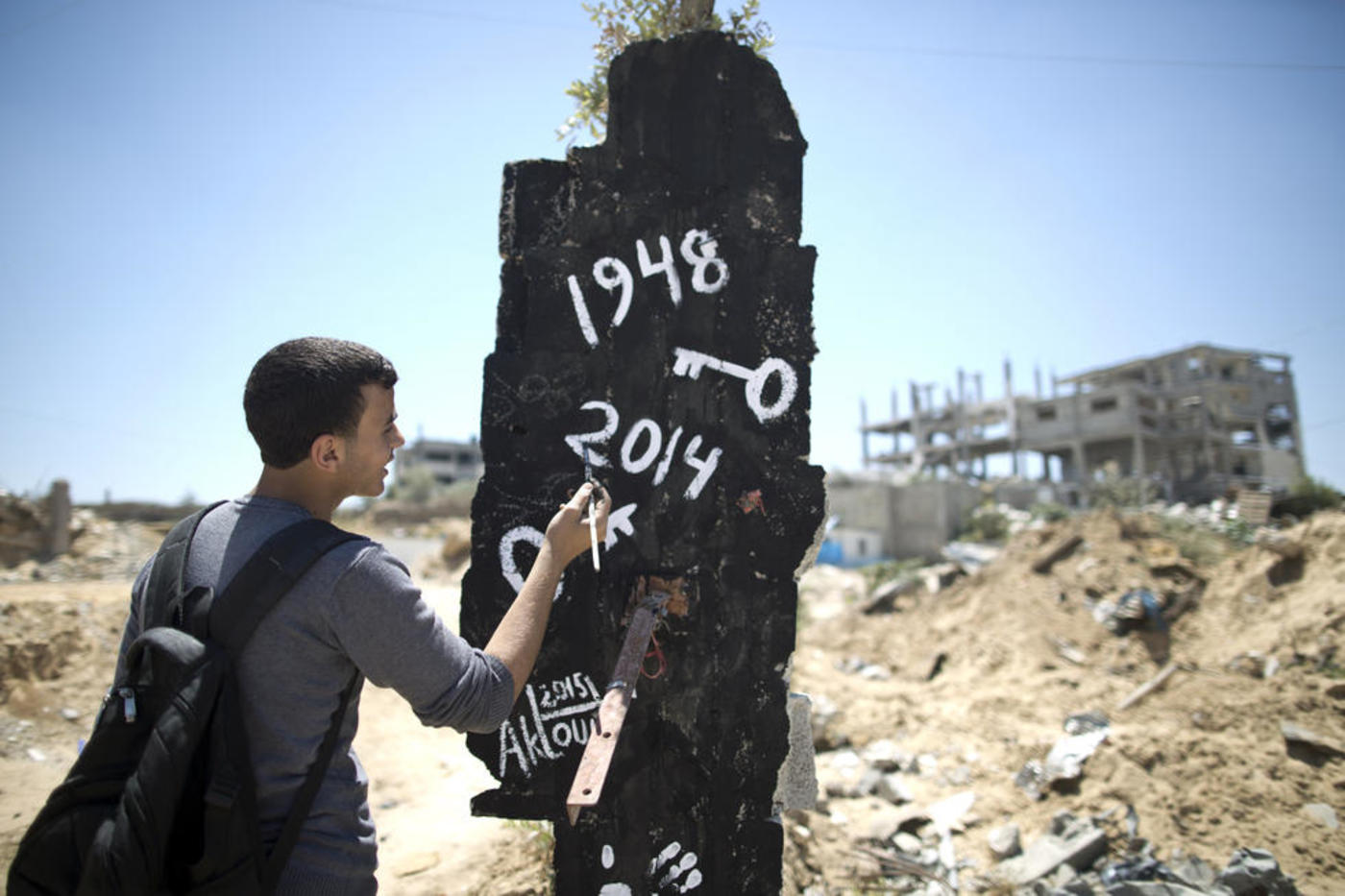 The recently announced decision of Robert Turner to resign as director of the United Nations Relief and Works Agency in Gaza, after three years in the post, is a blow to the people he worked so hard to help. Yet his parting message highlights the remarkable spirit of those same people, for whom he has pledged to continue fighting.

Turner, who intends to leave his job in mid-July, assumed the job in May 2012. Since then, he has witnessed two major Israeli assaults against the tiny besieged Palestinian Strip, a place that he described as “indomitable”.

As Turner put it, “Gaza is a place where the human spirit has shown its indomitability time and time again,” and where, one might add, its people, largely refugees of 1948 and their descendants, have proved their ingenuity and resilience time and time again.

Turner did not give reasons for his resignation. A UN source has said it resulted from frustration and a loss of hope that conditions in the Gaza Strip will improve. The same source said the UN agency was "disappointed" that the necessary radical solutions had yet to be found regarding the need to rebuild the Strip.

The UNRWA was established by resolution 302 (IV) of the UN General Assembly on 8 December, 1949. It was created as a temporary measure designed to respond to the plight of approximately three-quarters of a million Palestinian refugees, pending achievement of a political settlement.

Sixty-six years after its establishment, in the continuing absence of a solution to the Palestine refugee problem, the agency - sometimes described as the Cinderella of UN organisations - continues to exist and function.

Its mandate, repeatedly renewed by the UN General Assembly, was recently extended again until 30 June, 2017.  This extension and the agency’s very existence are due, as UN secretary general Ban Ki Moon said recently, to "political failure" and the inability of the international community to bring about a durable solution to the problem of the Palestinian refugees, whether Gazan or others, millions of whom are scattered all over the globe.

Perhaps no other place portrays this ongoing political failure as well as in Gaza. Yet, striking as the situation in Gaza is, it - as with the actual territory - has been deliberately disconnected from circumstances in rest of the Occupied Territories and across the regional and global landscape.

In order to truly understand the failure leading people such as Turner, Peter Hansen (the former UNRWA Commissioner General), Jon Gings (the former director of UNRWA in Gaza), Chris Guniss (UNRWA spokesman) and Nickolay Mladenov (the Special Coordinator for the Middle East Peace Process) to despair, one needs to look beyond the consequences of the drastic eight-year blockade crippling Gazans’ lives and the Strip’s economy.

Typically, the findings of most international organisations, including UN agencies, and expert opinions on Gaza point to the blockade as a main cause of Gaza’s dependency on aid, the high rate of unemployment, the growing poverty and the slow pace of reconstruction of infrastructure destroyed by Israel last summer.

In a letter to The Guardian published 9 September 9, 2012, Turner demanded an end to this disastrous blockade.

He wrote: We continue to demand a lifting of the blockade, which is costing the international community hundreds of millions of dollars each year. Allow the people of Gaza to enjoy the standards of development and economic prosperity for which they yearn. They are capable of self-sufficiency. They do not want the current levels of 80% aid dependency to continue and neither do the world's taxpayers who fund the international aid agencies.

There is little difference between Turner's assessment of two-and-a-half years ago and a report by Mladenov last month. Addressing the UN Security Council, Mladenov emphasised the urgent need to lift the blockade, stating that “the importance of free movement of goods and people as well as the eventual reopening of the crossings" are needed "for the alleviation of the suffering in Gaza".

This exact conclusion has been reached and presented by countless other UN and non-UN experts.

While the blockade itself is one of the major factors denying Palestinians in Gaza a normal dignified life, the core issue surfaces in the very last sentence of Turner’s letter. Turner carefully concluded his 2012 letter saying: “Let us address the root causes of this looming disaster rather than expecting the international community to foot the bill to mitigate their disastrous consequences.”

Turner, like all the other numerous, frustrated UN employees, is well aware that the root causes of the Palestinian problem have not only remained unaddressed, they have been swept and kept under the UN rug and by the  so-called "international community" for over 67 years.

Both the UN and the “international community” have utterly failed the Palestinians inside and outside the currently besieged Gaza Strip. The largest and most protracted of the world’s refugee problems, it remains stubbornly off the table and unresolved.

Consistent with this systematic obfuscation of the root cause of Gaza’s plight, this group of refugees and the agency created to serve them, UNRWA, are forced to wage a chronic struggle to foot the bill of that failure.

This political failure - a policy choice made and upheld by the leading world powers - has perpetuated and imposed continuous Palestinian suffering over four generations.  It is no coincidence that it has brought Gaza to the brink of a humanitarian disaster.

It is also no coincidence that this policy has hindered the operations of the UN and other organisations, creating extreme frustration among UNRWA staff, both local and foreign.

The policy manifests itself in different forms, only one of which is the inability of the international community and the UN to lift the siege on Gaza.

Israel continues to carry out systemic discrimination, military occupation and a lethal blockade with the unequivocal support from the very powers - both Western and regional - that fund the agencies working in vain to alleviate the consequences.

The policy repeatedly shields the occupying power from responsibility of any kind for its many illegal actions, its decades of violating Palestinians’ most basic rights, of its devious bureaucratic practices of ethnic cleansing and direct army-imposed oppression.

Turner's resignation may mean both good and bad news for the people of Gaza. The good news is that the Palestinians and their cause have been spoken for decisively, this at a time when the legitimacy of their struggle seems to be gaining momentum and global support.

Turner’s parting statement makes a commitment that he will continue advocating for the rights of Gaza and its large refugee population. A voice such as Turner's should be able to reach many ears and, possibly, to inspire political bravery, lending confidence to world decision-makers and statesmen; and to act, at long last, against the injustice done to Palestine.

The bad news is that, the people of Gaza, unlike Turner, can’t submit their resignation, swallow their frustration, and leave or move on after a short press conference. They are forced to go on dealing with the horrible daily details resulting from siege, occupation and apartheid.

At this point in time, when so many others have failed them profoundly and despair is the norm in Gaza, it is particularly painful for Palestinians to see Turner leaving. He is widely admired for his credibility, fairness and frankness. And yet, Palestinians in Gaza will surely remember Robert Turner as a man who, in face of world of deceit, found the courage to tell the truth.

Whether good news or bad, the great significance of Turner’s parting words not only lies in his moving description of Gaza’s spirit, ingenuity and persistence. It arises from his political framing of the Palestinian refusal to submit.

Until world policy is changed to repair the political failure cited by Ban Ki Moon, referred to by Turner and paid for in lives and deaths by Gazans and Palestinians at large, Gaza will remain “a place where the human spirit has shown its indomitability time and time again”.

Photo: A Palestinian artist draws a mural on the rubble of a building following a march to mark the 67th anniversary of the "Nakba," in the east of Gaza City on 16 May (AFP)