'Walking on nothing but trash': The MENA's growing mountain of electronic waste 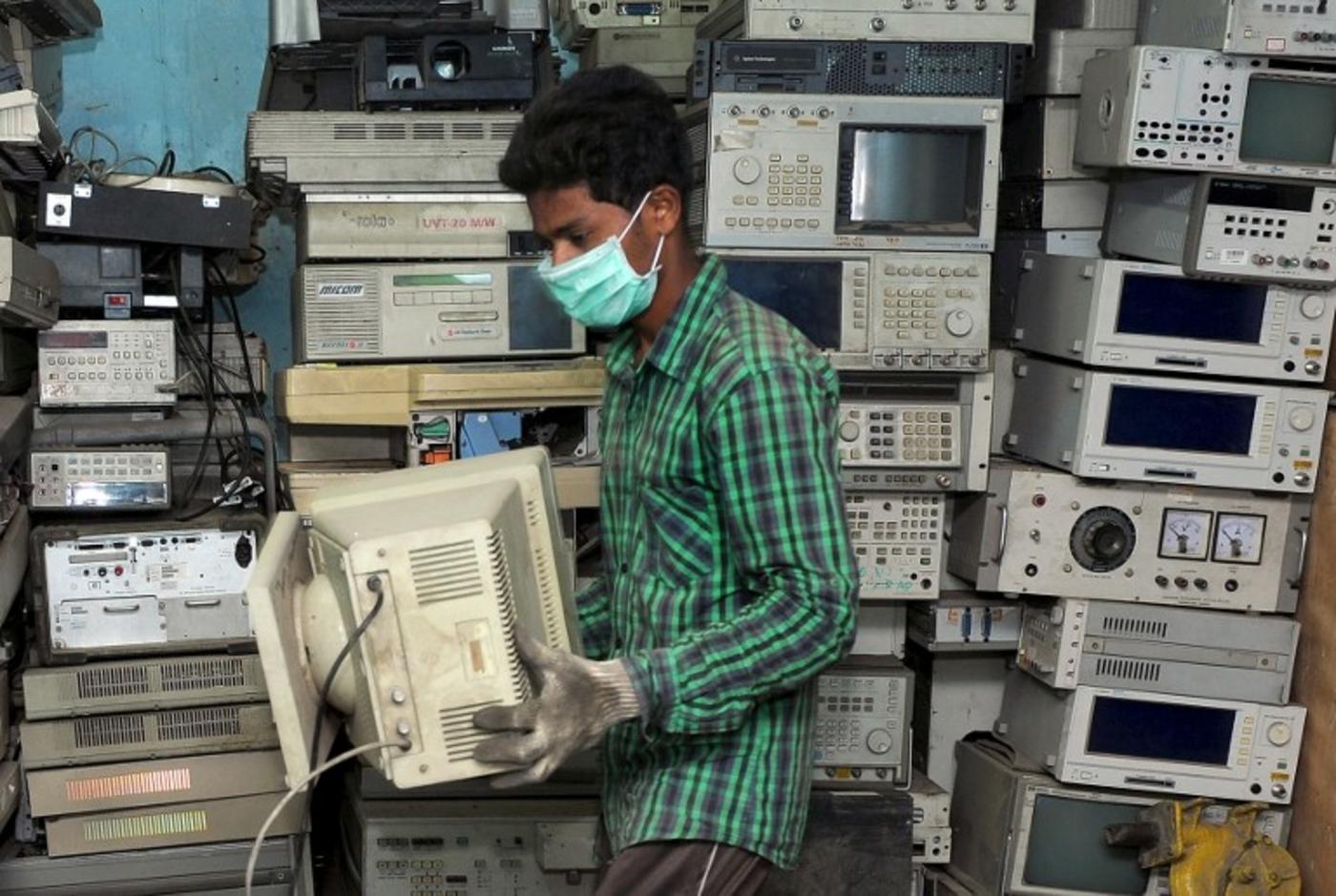 We use them, lose them or damage them - and then we dump them. Computers and mobile phones have revolutionised the way we run our lives but they are creating an enormous waste problem.

Worldwide, only between 15 and 20 percent of what’s known as e-waste or WEEE - Waste Electrical and Electronic Equipment – goes for recycling.

In the Middle East and North Africa region, it’s estimated the recycling rate is far lower, with only about five percent going for processing, most of it shipped out to centres in India, China or to southeast Asia.

The remainder of the waste – a lot of it containing toxic materials such as mercury, arsenic and lead – is dumped in landfills, stored in scrap yards and warehouses or incinerated.

The numbers associated with e-waste are dizzying; in the US alone more than 150 million mobile phones are thrown away each year together with hundreds of thousands of computers and other electronic products.

Dealing with this growing pile of phones, computers, iPads, games consoles and associated devices requires, in the first instance, good data and statistics - sorely lacking across the Middle East.

“E-waste management in the Arab region is in its starting phase,” says the Centre for Environment and Development for the Arab region and Europe (CEDARE), a Cairo-based non-government organisation.

Egypt, with its population of nearly 95 million, has the biggest stockpile of e-waste on the African continent

“There is a need for more basic data collection, inventories and associated studies in all areas of the Arab region.”

A 2014 report on e-waste by GIZ, the German government’s overseas aid agency, highlights not only the lack of e-waste recycling facilities across the region but also the general lack of awareness of the potential dangers of such rubbish, demonstrated by the almost total absence of regulations regarding its disposal.

Egypt, with its population of nearly 95 million, has the biggest stockpile of e-waste on the African continent.

“Currently, a formal e-waste management system does not exist in Egypt,” says the GIZ report.

“Electronic waste in Egypt is generally either burned or thrown into landfills in slums such as Manshiet Nasser, Mokattam or Dewei’a…over time harmful emissions start to affect the people who are living near these landfills.”

In the Cairo area, people have traditionally relied on an informal, but often efficient system of rubbish collection run by the Zabbaleen – mainly Coptic Christians living in communities in Manshiet Nasser and nearby neighbourhoods who earn their living from recycling.

Those who recycle e-waste by hand run the risk of serious health problems. The air is also polluted and water courses contaminated

The trouble is that safe e-waste recycling needs specialised - and expensive – equipment. It can be a profitable business; computers and phones contain quantities of precious metals such as gold, silver, copper and platinum.

But those who recycle e-waste by hand - with computer circuit boards cooked in vast vats, cables burned to extract copper and equipment submerged in toxic acids – run the risk of serious health problems. The air is also polluted and water courses contaminated.

Guiyu in China – once infamous as the world’s e-waste capital – and areas outside Accra in Ghana are testament to the environmental devastation and health problems caused by the informal recycling of e-waste.

In the Middle East, the area near Idhna, a town of about 20,000 southwest of Hebron on the West Bank, has long been known as an e-waste recycling blackspot or electronic graveyard.

Once a farming area, the Idhna recycling industry was established in the early 2000s as the price of copper and other precious metals rose steeply. According to a report in the journal Nature, about half of all the e-waste generated in Israel is trucked in to a number of facilities round Idhna, to be sorted and recycled.

While the recycling provides a living for locals, toxic compounds have polluted the land and water courses in the area.

“The landscape is saturated with these contaminants” says Dr Yaakov Garb, an Israeli environmental scientist who has studied the impact of e-waste on Idhna and surrounding villages.

Many young people carry out the often hazardous work in the numerous recycling workshops in the area. Locals – and those living in nearby Israeli settlements - say the burning of cables and other recycling activities has poisoned the air and caused large-scale respiratory illness.

There are some signs of a more enlightened approach to e-waste in the region. A project backed by SIDA, Sweden’s development agency, and supported by both the Palestinians and Israelis, aims to clear up much of the area around Idhna and provide facilities and equipment for the safe handling of e-waste.

Elsewhere entrepreneurs are setting up e-waste businesses, hoping to make money out of recycling.

In Egypt, a company called Dr WEEE collects and pays for e-waste from households and companies. Essam Hasham, its founder, says one of the main challenges is raising awareness about recycling.

“In addition to Dr WEEE’s logistical challenges, including the provision of e-waste collection vehicles, the main challenge is that society still sees recycling as a luxury,” he told Al-Monitor.

Mostafa Hemdan, an engineering student, set up his Recyclobekia e-waste company six years ago in the garage of his parents’ house north of Cairo.

"I was watching a documentary about electronic recycling, and I realised there was a lot of potential in extracting metals from mother boards - gold, silver, copper, and platinum," he told the BBC.

"It was a booming industry in Europe and the US, but no one in the Middle East was doing it."

Recyclobekia now employs more than 20 people and says it sells more than $2m of recycled e-waste each year.

'Walking on nothing but trash'

The mountain of e-waste both in the region and around the world is not going to be reduced any time soon. More electronic gadgets are being produced virtually every day. Life spans of phones, computers and other items are being reduced, often due more to fashion than to upgrades in performance levels.

The Gulf region is, on a per capita basis, one of world’s largest consumers of electronic products. Stuart Fleming is the chief executive of Enviroserve, an international e-waste recycling company based in the United Arab Emirates (UAE).

Enviroserve is building what it says is one of the world’s largest e-waste recycling centres in the UAE, aiming to collect computers and other devices not just from the Middle East but also from various locations in Africa.

“People in this region have been talking about the growing problems associated with e-waste for years but not actually doing anything,” Fleming told Middle East Eye.

“There’s an urgent need for action - there has to be a move towards sending zero amounts of waste to landfill or else future generations are going to be walking on nothing but trash.”