What the UAE fears most: Democracy

David Hearst
The Emiratis can intervene in the region's conflicts, install dictators, and arrange coups. They can apply maximum force. They will never, however, govern with consent 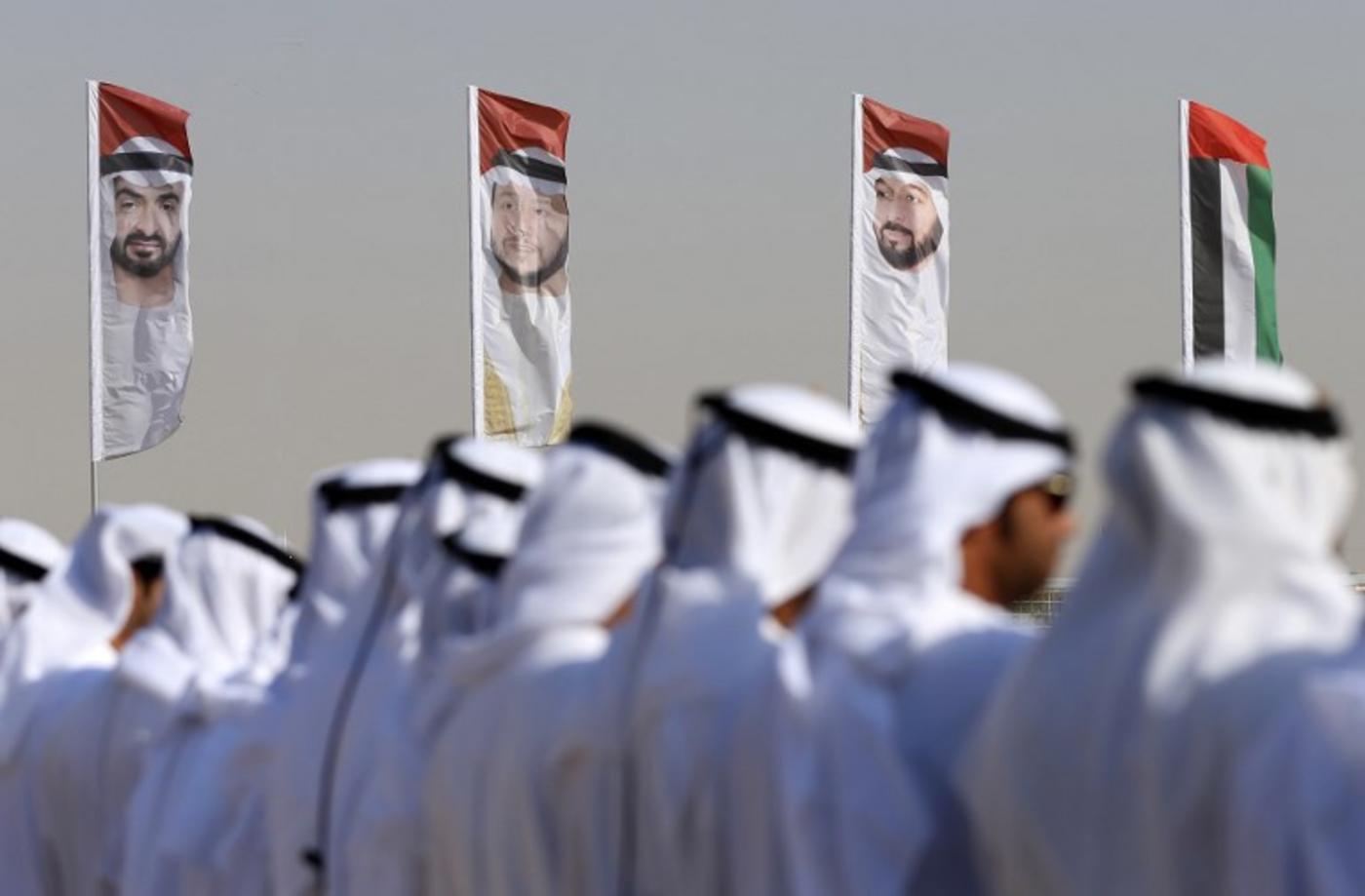 Future generations of historians will study the times we live in out of a particular, if morbid, curiosity.

They will puzzle over why it was that we left intact the banking system that created that the crash of 2008, an event that was to repeat itself on a bigger scale.

They will examine the meltdown of social democracy and liberalism. They will ask themselves why Muslims were targeted in Europe and why terrorism was recast as a monopoly of Islam; they will study the speeches of ministers who saw Trojan horses where none existed.

We know what has died - the theory of liberal interventionism, after the military fiascos of Afghanistan, Iraq and Libya, but what replaces it?

A future Edward Gibbon, writing about the “Decline and Fall of the Western Empire,” will scrutinise other symptoms of malaise - the volatility of public opinion; the outbreak of identity politics, the application of incoherent tests of citizenship, the obsessive compulsive reliance on past heroics (Battle of Britain, Dunkirk); the anxiety about the future.

They will ponder the US withdrawal from the Middle East and the shrinking of Britain.

Much of this can be seen without the benefit of hindsight. To take just one line of inquiry, is there such a thing as British foreign policy? Can you define it? Do we even have a foreign minister?

John Kerr, former head of the diplomatic service and former ambassador to the US and Brussels, does not seem to think we have. In an excoriating demolition of the current government this week, he shredded Boris Johnson for saying and doing nothing.

“Why are we silent while President Trump refuses to rule out military action against Venezuela? Or threatens trade measures against China? Or rages against the nuclear agreement with Iran which we helped to negotiate? Where do we stand on the Saudi/Qatari crisis? Are we still relaxed about the Saudis bombing cholera-struck Yemen?” Kerr wrote.

What indeed is the policy? We know what has died - the theory of liberal interventionism, after the military fiascos of Afghanistan, Iraq and Libya, but what replaces it? Does policy on Saudi Arabia merely consist of keeping tens of thousands of jobs going at BAE?

In practice, much of the traffic and influence runs the other way. No longer does Britain scour the world for raw materials, as China does today. It does the reverse. Britain sells its raw material - land prices in London - to emerging markets and former colonies. That is what the London Borough of Haringey has just done with the biggest urban redevelopment in Europe

For centuries, national politics were manipulated openly by colonial powers from their embassies in vast tracts of the world. British colonial policy in the Gulf consisted of replacing difficult sheikhs with docile ones. Now, however, this relationship is being reversed. Their ambassadors lecture us in the same way our ambassadors used to lecture them.

To Russian eyes, the claims of US security establishment that Moscow interfered in the US presidential elections carries a heavy irony

To Russian eyes, the claims of the US security establishment that Moscow interfered in the US presidential elections carries a heavy irony. What was post-Soviet Russian politics about if not for a doomed American attempt to mould Boris Yeltsin’s Russia in its image? That went on for a decade under the veil of democracy promotion and state building. When it failed, Washington even asked itself the question of how it had “lost” Russia.

Sensing the inner decay in Washington similar to the one which doomed the Soviet Union, the master tactician Vladimir Putin has reversed the trend. Like it or not, Putin’s former Russian ambassador to Washington, the gregarious Sergei Kislyak, became a political player in Washington.

Yousef Otaiba still is. Like Kislyak, Otaiba, as the UAE ambassador to the US, sees himself as a power player in his host nation. He can place uncritical encomiums to Mohammed bin Salman in the New York Times and the Washington Post. He can grab parts of Trump’s presidential schedule. He can arrange secret meetings with the president. He can poison the reputation of bin Salman’s rival cousin.

Otaiba sees the dimensions of his job as being very much bigger than merely representing a tiny Gulf state, the United Arab Emirates.

For one thing, he has spent most of his energy promoting a prince from another country, Mohammed bin Salman, the future Saudi king, whereas the Saudi embassy has been almost totally passive and out of the loop.

For another, Otaiba has huge ambition. It is to construct a plausible narrative in which his tiny state, through money and proxies, takes over the US role in the Middle East as America retreats to confront China in the Pacific.

Otaiba already thinks his master, Mohammed bin Zayed, has got control of Saudi Arabia with the rise of the young prince, the ideal ball of soft wax on which to imprint Emirati designs. That is being replicated in Yemen, where a split between the Houthis and the former dictator Ali Abdullah Saleh plays into Emirati hands.

They need this to happen in Libya, and they have already switched sides in Syria. The Arab world will soon be dominated by like-minded dictatorships.

The words that Otaiba uses in his emails to cloak a future Emirati seaborne empire - the ports that stretch from the Persian Gulf to the Red Sea and the Suez Canal - are pure sham. He talks of a Middle East dominated by secular governments. He said to PBS’s Charlie Rose: “What we would like to see is more secular, stable, prosperous, empowered, strong governments.”

In reality, the Gulf’s absolute monarchies use Islam and imams to endorse dictatorship even more than political Islamists do. Bin Salman picked a very important night in the Islamic calendar to receive allegiance as the new crown prince, and of course it happened in Mecca. It was the 27th night of Ramadan, Laylat al-Qadr, the night of power when prayers are magnified in importance a thousand times.

In reality, the Gulf’s absolute monarchies use Islam and imams to endorse dictatorship even more than political Islamists do

Rival preachers are cast as terrorists - but not because their interpretation of Islam is more extreme. It's their moderation the Saudi clerics fear.

One of the objects of Emirati (and Israeli) ire comes in the form of an eminent Muslim Brotherhood scholar, Yousef al-Qaradawi, who lives in Doha. Qaradawi is no social liberal. He is not about to embrace homosexuality or Western feminism. But it is not those qualities that have put him on the Saudi terror list.

In May 2008, Qaradawi issued a fatwa permitting the building of churches in Muslim countries. He said it is allowed in Islam and Muslims have to respect and protect them.

Qaradawi has been attacked ever since for betraying sharia texts. In May 2008, Sheikh Abdallah bin Mani’, a member of the Committee of Senior Scholars, wrote that the building of churches should be considered an act of collaboration in committing sin and aggression.

He wrote: “Our Messenger was explicit in saying that there shall not be two religions in the Arabian Peninsula." He is quoted in the same narration as saying: “Remove them from the Arabian Peninsula ... There is no doubt that the states of the Arabian Peninsula are strong, well-placed and independent when it comes to internal affairs. Therefore, I consider allowing the existence of any temple that is not Islamic does indeed constitute a violation and a contradiction of the directive made by the Messenger of Allah peace be upon him.”

In March 2012, Abd al-Aziz Abdallah al-Sheikh, the chairman of the committee of senior scholars, and Saudi mufti took up the same theme. He was asked to rule on calls by the Kuwait’s parliament to demolish churches.

He replied: “Kuwait is part of the Arabian Peninsula where all churches should be demolished since approving the existence of those churches would amount to approving a religion other than Islam."

This Saudi ruling continues to this day. From the website of Saudi Sheikh Salih bin Fawzan al-Fawzan: “As for the Arabian Peninsula, it is not permissible in it to keep any churches or other temples because it is the source of the mission, the source of Islam.”

For how long will Washington swallow the argument that the Emiratis and Saudis are fighting terrorism?

In 2004, George Tenet, former CIA director, told the 9/11 commission of the time when they had to call off a suspected air strike against Osama bin Laden, because in his words “you might have wiped out half the royal family in the UAE in the process".

In Yemen, the UAE is continuing to use al-Qaeda proxies to undermine the Islah party in the besieged rebel stronghold of Taiz. A confidential UN report on Yemen by a panel of experts reporting to the UN Security Council highlighted the emergence of the Salafi anti-Houthi commander in Taiz, Sheikh Abu al-Abbas.

The report read: "Abu al-Abbas receives direct financial and material support from the UAE. His strategy in Taiz is to engage the Houthis as his primary target, whilst constraining al-Islah’s political and military influence. His direct engagement of the Houthis means that he has allowed the spread of AQAP [al-Qaeda in the Arabian Peninsula] elements within the city as a force multiplier."

What makes Qaradawi a threat to the ruling elites has nothing to do with Islam. It is the fact he provides an alternative reading and that the Muslim Brotherhood continues to have democratic legitimacy.

Look at what has just happened in local elections in Jordan, an autocracy which has tried really hard to split the Ikhwan, by closing their offices and setting up official sanctioned splinter groups. When you have free-ish elections, the MB continues to emerge as the biggest single party. If the Brotherhood were to give up the ghost, and Arab nationalists re-emerged, the same would happen to them.

That is what Otaiba and his like fear. It is called democracy. And that is why their plans are doomed. They can intervene, install dictators, and arrange coups. They can apply maximum force. They can never, however, govern with consent.