Iraq 2020: What will happen to the protest movement?

Harith Hasan
The confrontation and bargaining between the street and the oligarchy will continue, and its outcome will depend on which of the two proves more resilient and adaptive 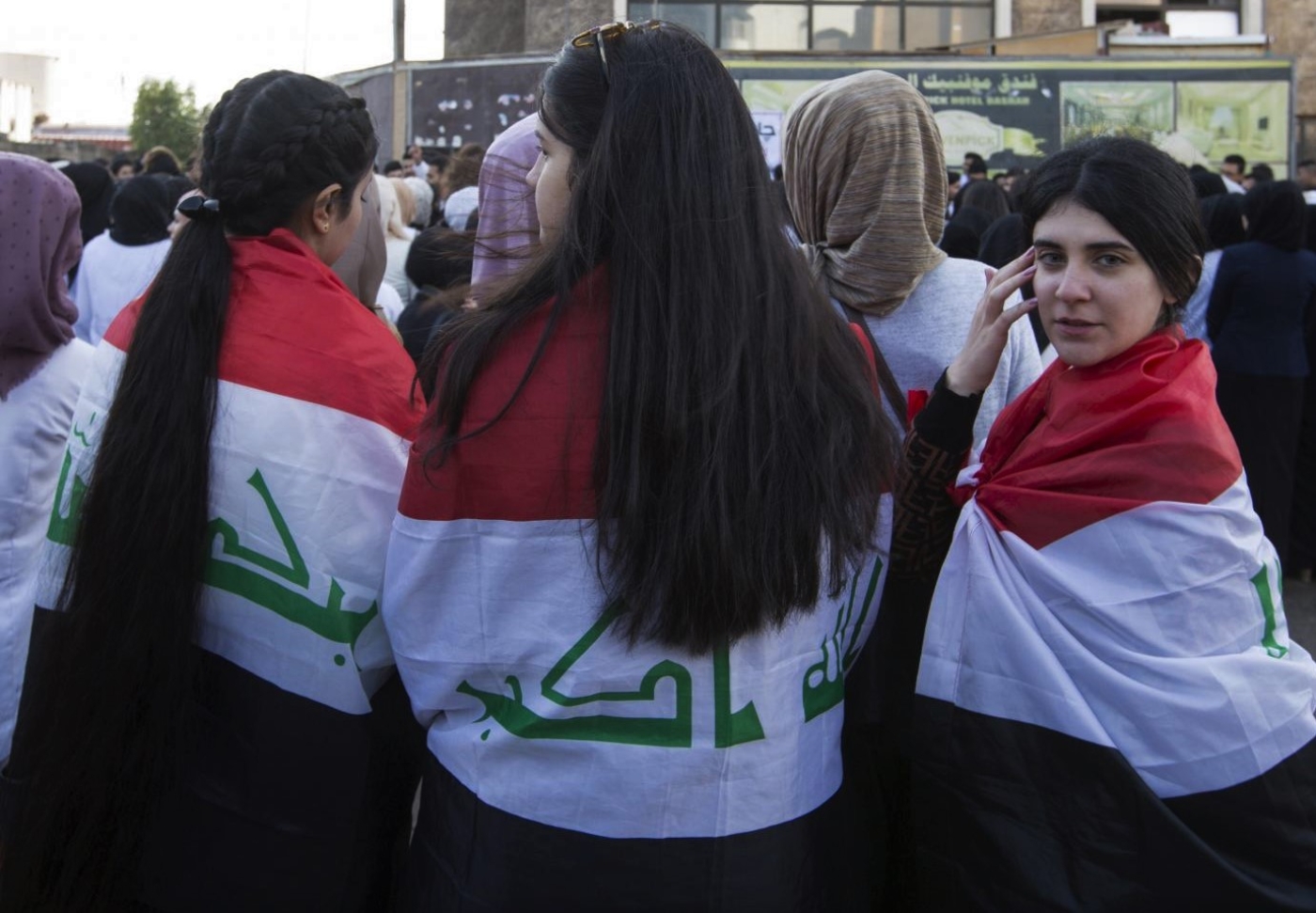 This year will be remembered for the largest and most enduring anti-government protests in Iraq’s modern history.

What started in October as a relatively small demonstration of young men, mostly unemployed or underemployed, quickly became a mass movement opposing the regime. The government and its allied paramilitaries responded with disproportional violence, killing more than 400 protesters so far and injuring thousands.

Partly as a reaction to the crackdown, some protesters attacked the offices of political parties and paramilitaries, as well as the Iranian consulates in Karbala and Najaf. The demonstrations ultimately forced Prime Minister Adil Abdul Mahdi to resign, but this could only have a minor impact on the confrontation and bargaining between the street and ruling factions.

The political groups that placed Abdul Mahdi in his position still hold the power to nominate a new prime minister and determine the country’s trajectory in 2020. They will work to maintain the status quo through cosmetic changes to the system, using the carrot-and-stick approach to weaken or dismantle the protest movement.

Yet the political elite is facing unprecedented scrutiny by the Iraqi public, and its expected failure to implement major reforms could further energise the protest movement. The options taken by the dominant factions, beginning with the selection of a new prime minister and passing a new electoral law, would determine the trajectory of events in 2020.

It is difficult to imagine a smooth process by which ruling factions would make the right decisions, bridging the trust gap with the public

It is difficult to imagine a smooth process by which these factions will make the right decisions, bridging the trust gap with the public.

They have parasitically channelled state resources to their patronage networks and militias, and their survival depends on perpetuating the system of power apportionment (known as muhassesa) that distributes these resources among them, while diffusing responsibility for the government’s failures and dysfunctionality.

They have guaranteed their continuous ability to stay in power and to extract resources by means of undermining the rule of law, electoral manipulation, and legal and extralegal use of violence.

Protesters are demanding an end to these parasitic practices by reenforcing the rule of law on these factions, introducing an electoral system that will not reproduce their dominance, and ending the apportionment of state positions and resources.

Such reforms, if genuinely implemented, would presumably weaken the dominant factions - which is why it would be naive to expect them to concede them voluntarily.

Indeed, some of these factions, primarily those backed by Iran, continue to disseminate a narrative about the protest movement as a “foreign plot”. In addition to the reported involvement of Iran-backed militias in the crackdown, abduction and intimidation of activists, they even organised counterdemonstrations framed as an attempt to remove “disorderly elements” from Baghdad's Tahrir Square.

To add further complexity, Kurdish and Sunni parties, who are not facing protests in their areas, don’t want to give up the benefits secured through the sectarian-based quota system, or to accept an electoral system that does not serve their interests. Hence, the Iraqi parliament continues to be numerically dominated by groups that have no incentive to substantially reform the system.

In order to restore “order” and impose their own candidate for the priemership, Iranian-backed groups may decide to escalate the use of oppressive means, further asserting their dominance over the security apparatuses and turning Iraq into a more authoritarian state.

Already, media outlets sympathetic to the protest movement have been closed, the internet has been intermittently shut down, and none of the top leaders who ordered the killing of protesters have been brought to justice while assassinations of political activists continues.

But authoritarianism means a further consolidation of power in the hands of a dominant, if not single, faction - which is hardly the case now, given the fragmented nature of power in Iraq. The cost of such a move could be very high, given that other political and societal forces would resist it to protect their own shares of power, autonomy or influence.

There is no clear vision to unite the ruling factions, and some are using the current crisis to improve their political weight and leverage, further complicating the picture.

The resignation of Abdul Mahdi put an end to the shady “partnership” between Muqtada al-Sadr’s Sairoon coalition and Fateh, an alliance of Iran-backed parties and paramilitaries that leads al-Bina' alliance. The two coalitions chose Abdul Mahdi as a compromise candidate in 2018.

Sadr said he would not be part of a new elite deal that nominates the next prime minister without securing the approval of the protesters.

Despite having regularly benefited from the power-apportionment system, Sadr largely derives his political power from the grassroots movement of predominantly underprivileged Shia who follow him. As a populist leader, he cannot sustain this power - which is already threatened by the independent, grassroots protest movement - while fully siding with the ruling elite. At the same time, he might see this an opportunity to change the political equation in his favour. The grand Shia authority, Ali al-Sistani, whose 29 November sermon was interpreted by Abdul Mahdi as an instruction to resign, has commanded his representatives not to endorse any candidate, because he thinks the political elites should save themselves by embracing real reforms.

This has left Fateh and allied groups, such as those led by Nouri al-Maliki and Falih al-Fayyadh, with a difficult choice. If they select a candidate without Sadr’s approval or Sistani’s endorsement, they will come into direct confrontation with the street, as the coalition responsible for running the elected government. Their ideal option would be to reach a new deal with Sadr, which could mean accepting a less favourable equation of power than the one secured by the selection of Abdul Mahdi.

Still, any potential deal will be largely influenced by the street’s response. The game-changer today is the ability of a large number of Iraqis to mobilise and coordinate protest actions without the effective involvement or manipulation of any organised political group. But the success of the protest movement relies on its ability to develop a cohesive agenda for the future, and to turn the street mobilisation into an organised political force.

In Iraq, as in several other countries, this type of leaderless, decentralised and non-partisan protest movement has proved capable of surprising the ruling elites - but it has often failed to elaborate a clear alternative, or to turn the street mobilisation into an electoral victory.

A return to the pre-October status quo is no longer possible; yet, a sweeping change that fully removes the ruling oligarchy remains unlikely

Additionally, protesters’ ability to sustain societal support is another challenge, especially as regime forces seek to highlight the “disorderly” side of the protests and the actions of the less-disciplined elements among them.

Without the support and sympathy of most segments of society, the protesters will find it difficult to sustain the level of mobilisation and resilience they have enjoyed so far, and could suffer “revolutionary fatigue”, making them vulnerable to the intimidating attempts of ruling factions.

A return to the pre-October status quo is no longer possible; yet, a sweeping change that fully removes the ruling oligarchy remains unlikely. Instead, the confrontation and bargaining between the street and the oligarchy will continue, and its outcome will depend on which of the two proves more resilient and adaptive. 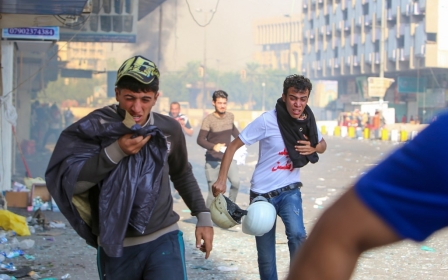