Alaa Tartir
If the US cuts aid to Palestine, then it may force the Palestinians to have the political courage to stand up for what's right 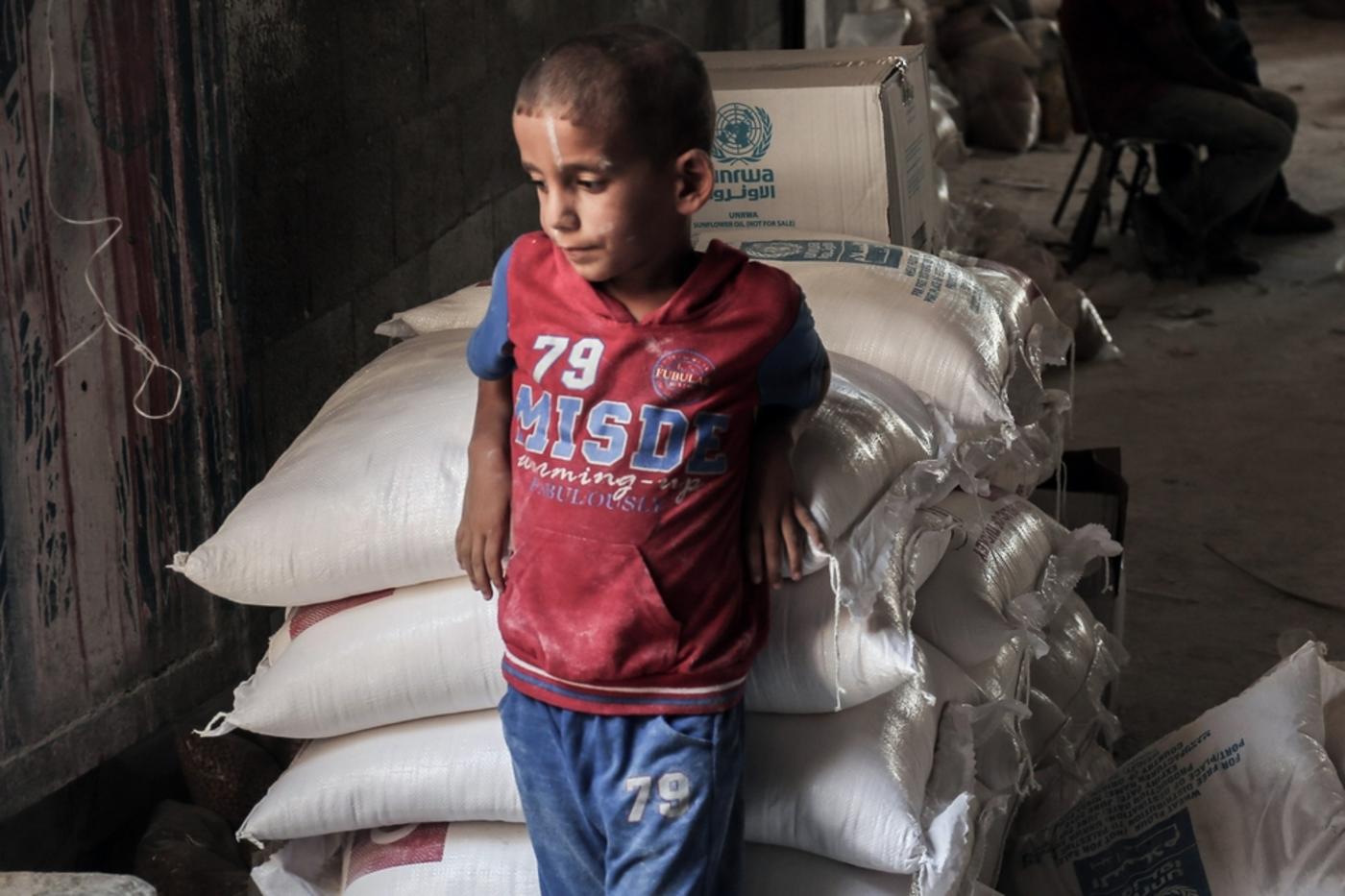 Many observers and analysts warn that cutting US aid to the Palestinian Authority (PA) is dangerous and may threaten stability. Some have even argued that US President Donald Trump's funding threat to Palestinians is more dangerous than his decision to move the US Embassy in Israel to Jerusalem.

"Do you think that the PA's days are now numbered?" is one of the most recurring question by journalists over the past few days after Trump's statement that "we pay the Palestinians hundred of millions of dollars a year and get no appreciation or respect. They don’t even want to negotiate a long overdue."

Trump continued by saying "with the Palestinians no longer willing to talk peace, why should we make any of these massive future payments to them?". However, Trump's threat to withdraw aid to the PA should not come as a surprise.

US aid has been always used as a political tool, and the conditionality attached to it has been harmful and damaging for the Palestinians.

But in case the threat of cutting aid to the PA materialises, is it really that bad? I argue no; it is not that bad. Arguably it may prove beneficial - possibly not in the short term, but certainly in the long term.

US aid to the PA largely aims to solidify the role of the PA as a subcontractor to Israel's occupation and has made the Israeli occupation cheaper and longer, which has benefited Israel's economy, entrenched Palestinian fragmentation, and denied the potential for Palestinian democracy. For all these reasons, cutting US aid to the PA is not that bad.

The first and foremost goal of the US to Palestine is to promote "the prevention or mitigation of terrorism against Israel". In other words, aid is provided to the Palestinians to secure Israel; but is that an assistance to the Palestinians or to Israel?

According to this Israel-first security paradigm, the US administration poured millions of dollars of security assistance to the PA as a way to "professionalise" its security forces for the stability and the security of Israel, its occupation, and settlers in the occupied West Bank.

This skewed logic meant that the PA became a subcontractor to the Israeli occupation, thanks to US aid and conditionality.

This did not only sustain Israel's occupation, but also it made it profitable for Israel, its economy and its companies. US assistance to the Palestinians is often used to pay PA creditors directly, many of which are Israeli companies charging predatory rates and taking advantage of a captive PA economy.

In addition, the majority of US aid for Palestine (up to 72 percent), especially the securitised aid, ends up in Israel's economy. Therefore, a large portion of the US "assistance" to the Palestinians effectively translates to additional support for Israel and its security apparatus.

US aid has also entrenched Palestinian fragmentation over the past decade and fuelled the divide between the West Bank and the Gaza Strip. Also, the aid does not only deny the potential for Palestinian democracy but sponsors the emergence of an authoritarian style of governance in the West Bank.

Driven by its securitised agenda, the US-sponsored securitised processes aims to criminalise resistance against Israel's occupation and supress the Palestinian people's needs and aspirations.

The operations and interventions of the United States Agency for International Development (USAID), and the office of the US Security Coordinator (USSC), were instrumental in causing all this harm. By doing so, these two institutions not only violate key international principles of aid delivery, but also they effectively act as a complementary arm of the Israeli colonial occupation.

Certainly, these damages and harmful consequences of the US aid intervention will not be automatically reversed if Trump's threat to cut aid becomes a reality.

It is far more complex than that, as it requires dismantling complex structures, dynamics, and institutions that have emerged and solidified over the past quarter of a century.

What is crucial at this stage is that Palestinians do not panic and curse their luck for "losing" $300mn to $400mn a year; rather, they should act - and they have plenty of choices. As a starter, they should hold USAID and the USSC accountable, and they should revoke the registry exemptions the late Palestinian leader Yasser Arafat gave to USAID to operate without any Palestinian oversight.

It is time to reverse the "vetting process"; instead of USAID vetting the Palestinians, it is time for the Palestinians to do the necessary vetting to USAID and the other US bodies in the aid industry in Palestine.

Doing so requires the political will and courage among Palestine's political leadership. However, the current PA leadership remains fixated on its failing approaches and formulas.

The inability of the PA leadership to perform small actions, such as revoking USAID registry exemptions, reflects a deeper legitimacy crisis and illustrates the tactical moves by the current PA leadership to buy time, remain in authority, or re-arrange "peace" talk cards. Those ideas must be urgently resisted and replaced by new strategic directions that are dictated by the Palestinian people.

It is misleading to assume that aid and its benefits trickle down to the ordinary Palestinian people. The aid industry is designed to benefit few and harm many

The remaining major challenge, however, is how to channel the Palestinian people's demands and aspirations into a legitimate polity and representative institutions.

It is misleading to assume that aid and its benefits trickle down to ordinary Palestinian people. The aid industry is designed to benefit few and harm many.

Sam Bahour, the chairman of Americans for a Vibrant Palestinian Economy, recently argued: "I would not lose any sleep if Congress totally stopped funding the Palestinian Authority. It would not make daily life easier under occupation, but maybe it would wake up enough American leaders to see the absurdity of their being dragged around like a flock of sheep by their Israeli herder."

I would not lose any sleep, either. While a US aid cut will have some negative consequences on Palestinian lives, long-term prospects may prove more more positive as this action would push the PA to abandon the framework of the Oslo Accords aid model. It's time to lay the failed Oslo aid model to rest.

But a phasing out process requires serious actions, concrete and clear steps, and a national action/rescue plan for a transition toward a post two-state formula and a post-Oslo Accords framework.

Finally, while humanitarian assistance is important, what matters more for the ordinary Palestinians is not a coupon to get wheat or sardines, but rather the political roots to fight against the denial of their rights.

Until those political roots are addressed and no matter of how big the aid flows get, ordinary Palestinians will not feel the positive outcome of aid, be it American, European, or Arab aid.

Trump's threat to cut aid offers the ordinary Palestinians a new opportunity to place the principles of self-determination and dignity in the core of the aid framework and industry.

Dr Alaa Tartir is the programme director of Al-Shabaka: The Palestinian Policy Network, and a research associate at the Centre on Conflict, Development and Peacebuilding (CCDP), The Graduate Institute of International and Development Studies (IHEID) in Geneva, Switzerland. Follow Alaa Tartir on Twitter @alaatartir and read his publications at www.alaatartir.com

Photo: A Palestinian boy stands leaning on to sacks of food aid provided by the United Nations Relief and Works Agency for Palestine refugees (UNRWA) in the town of Rafah, in the Southern Gaza Strip on August 22, 2017 (AFP)