Zaineb Abdulla
Within days of Trump’s election, we developed a self-defence technique to turn the fear of growing hate crimes into action 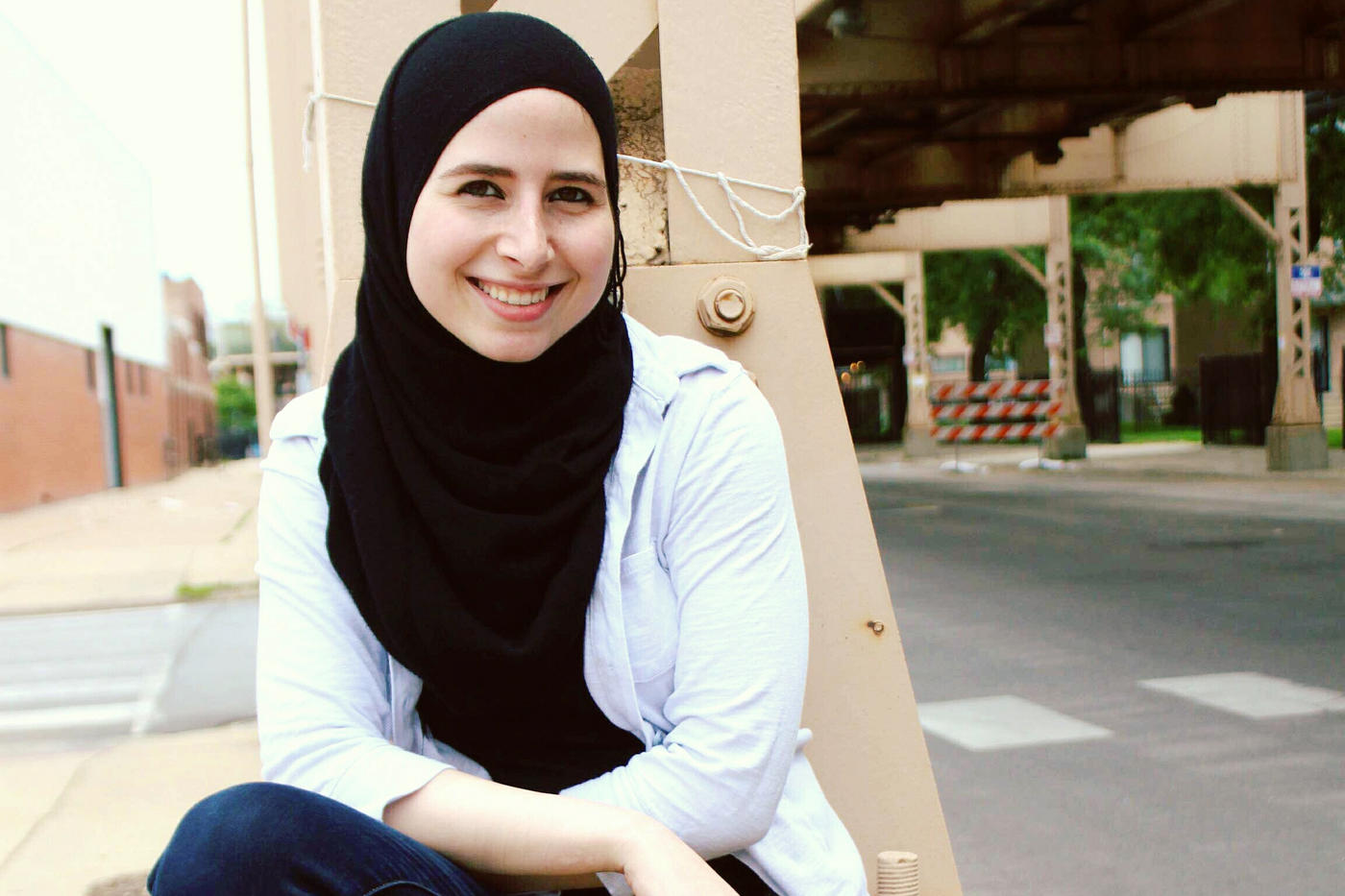 Editor's note: There is a step-by-step guide on how to prevent your hijab being grabbed at the end of this column

On a Tuesday night, Donald Trump was elected the next president of the United States.

By Wednesday morning, I received calls from friends and family, asking if my organisation Deaf Planet Soul (DPS) - a non-profit in Chicago that serves and empowers the deaf and hard of hearing -  had any tips on surviving hate crimes.

In this new era of yelling insults and ripping off hijabs, my community’s first instinct was fear. Our second instinct was action

By Saturday, I was in the gym with fighters Misho Ceko and Patrick Gatbunton, developing the now-viral "Hijab Grab Escapes". And by Sunday, DPS hosted its first Hate Crime Survival Seminar.

In the time since Trump’s election, the rate of anti-Muslim hate crimes has surpassed those immediately following 9/11.

In this new era of yelling insults and ripping off hijabs, my community’s first instinct was fear. Our second instinct was action.

Muslim Americans are accustomed to being at the short end of hateful rhetoric. It happened after 9/11. It happened when Obama was elected president and was accused of being - gasp - a Muslim.

It has happened every time a politician blamed Muslims for the world’s problems. And now, it has been happening as a vocal Islamophobe was elected into office.

Our fears are well-founded. In recent years, hateful rhetoric has manifested in disaster - mosques were firebombed, Muslims were murdered execution-style in their own homes, and simply because they looked like Muslims, half a dozen Sikhs were shot and killed in a rampage at a Sikh temple in Wisconsin.

Being Muslim, or looking like one, means being a very visible target.

From fear to action

Fear is a legitimate reaction, but it’s not the only one. In the wake of Trump’s victory and the presumed legitimisation of bigotry as a new norm, the Muslim community is changing the narrative.

Alongside our neighbours and allies, we are making it known that we are not victims. We will not sit idly by while others berate us. We will not be paralysed by fear.

Already, coalitions are building across Trump’s marginalised populations and a collective voice is being raised.

This was the country’s first ever weekly self-defence class taught in sign language and accessible to the deaf as well as to those with various cognitive and physical disabilities.

Thousands have protested his election in multi-night demonstrations across the country and people are making it clear that an attack on one of us is an attack on all of us.  We are taking our fear and transforming it into powerful and peaceful strength.

My organisation's Hate Survival Seminars are a direct response to this fear and call to action, but it didn’t come from a vacuum.

Before election day, we held weekly classes and self-defense seminars taught through the simultaneous use of American Sign Language (ASL) and spoken English, designed to give all women access to potentially life-saving resources.

As far as we are able to determine, this was the country’s first ever weekly self-defence class taught in ASL and accessible to the deaf as well as to those with various cognitive and physical disabilities. This came from the financial support of the Chicago Women’s Foundation and with the guidance of Misho Ceko and Adam Penny from Chicago Mixed Martial Art’s gym.

Because deaf women are at an increased risk of both domestic and interpersonal violence, we are working to ensure that all techniques we teach are accessible.

There is a special fear amongst deaf women who also happen to be visible minorities: a fear that these attacks, while increasing in rate, are still impossible to detect and deter. It’s a scary thought to know that you can’t hear someone approaching you from behind.

We work with these women in our dual communities - deaf and Muslim - to develop the visual skills they need to detect an attack and respond accordingly. It is our mission to ensure that deaf women, especially visible minorities like Muslims, are as prepared as possible to handle, whatever may come in this post-election world.

No longer willing to be victimised

With Trump’s election, the religiously, racially, and ethnically diverse DPS board saw the immediate need to create a special self-defense response – what became the hijab grab escape - for those wearing the hijab and incorporate hate crime awareness into the seminars.

In these seminars, DPS staff and MMA partners work with students to develop responses to verbal assault, learn to identify and report hate crimes and appropriately respond as bystanders and witnesses of such offenses.

The moves demonstrated in the hijab grab escape videos may not work for all women, in all scenarios, but they’re a start.

The videos are necessary not only for the practical application, but for the symbolism they encapsulate: they went viral almost immediately after posting mainly because Muslim women are no longer willing to be victimised by bigots whether, verbally, physically or emotionally. We are standing up and standing together.

DPS is working hard to ensure that all women in our community, both Muslim and otherwise, have access to potentially life-saving self-defense techniques.

In doing so, we hope to show the power of collaborative cooperation between different people and make it clear that we will not sit idly by in the face of oppression and ignorance. 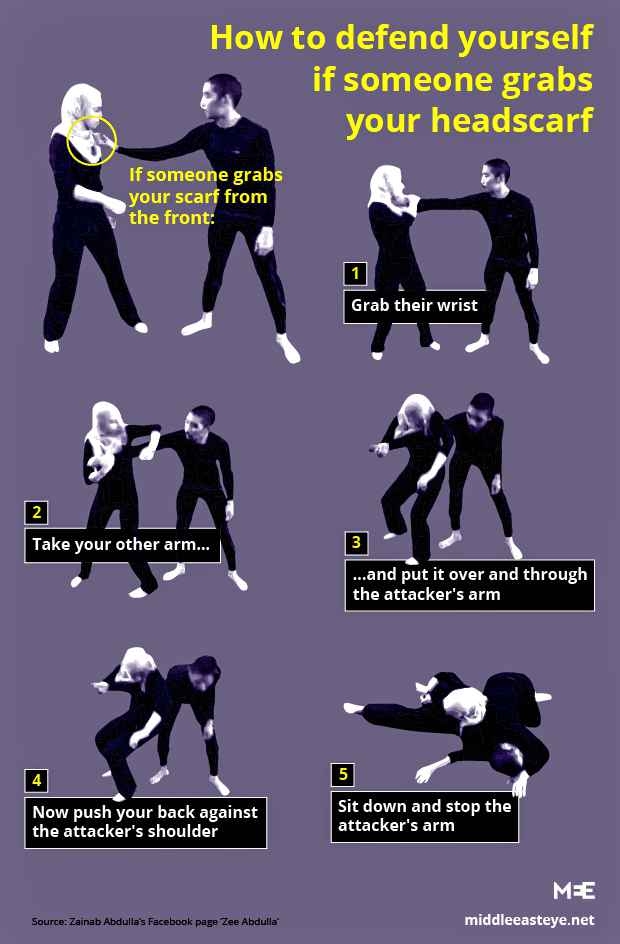 - Zaineb Abdulla is an Iraqi-American Muslim living in Chicago. She is the vice president of Deaf Planet Soul and is currently pursuing her masters in Deaf Education and Nonprofit Management. She trained in Brazilian Jui Jitsu, teaches self defense and hosts hate crime survival seminars.

Image: Zeinab Abdulla runs self defence classes in Chicago: "We work with women in our dual communities - deaf and Muslim - to develop the visual skills they need to detect an attack and respond accordingly"