Will Trump finish off the special relationship?

John Rees
Differences over Jerusalem show again that Theresa May’s rush across the Atlantic to hold hands with the new president was ill-judged. A Trump visit to the UK is a disaster waiting to happen 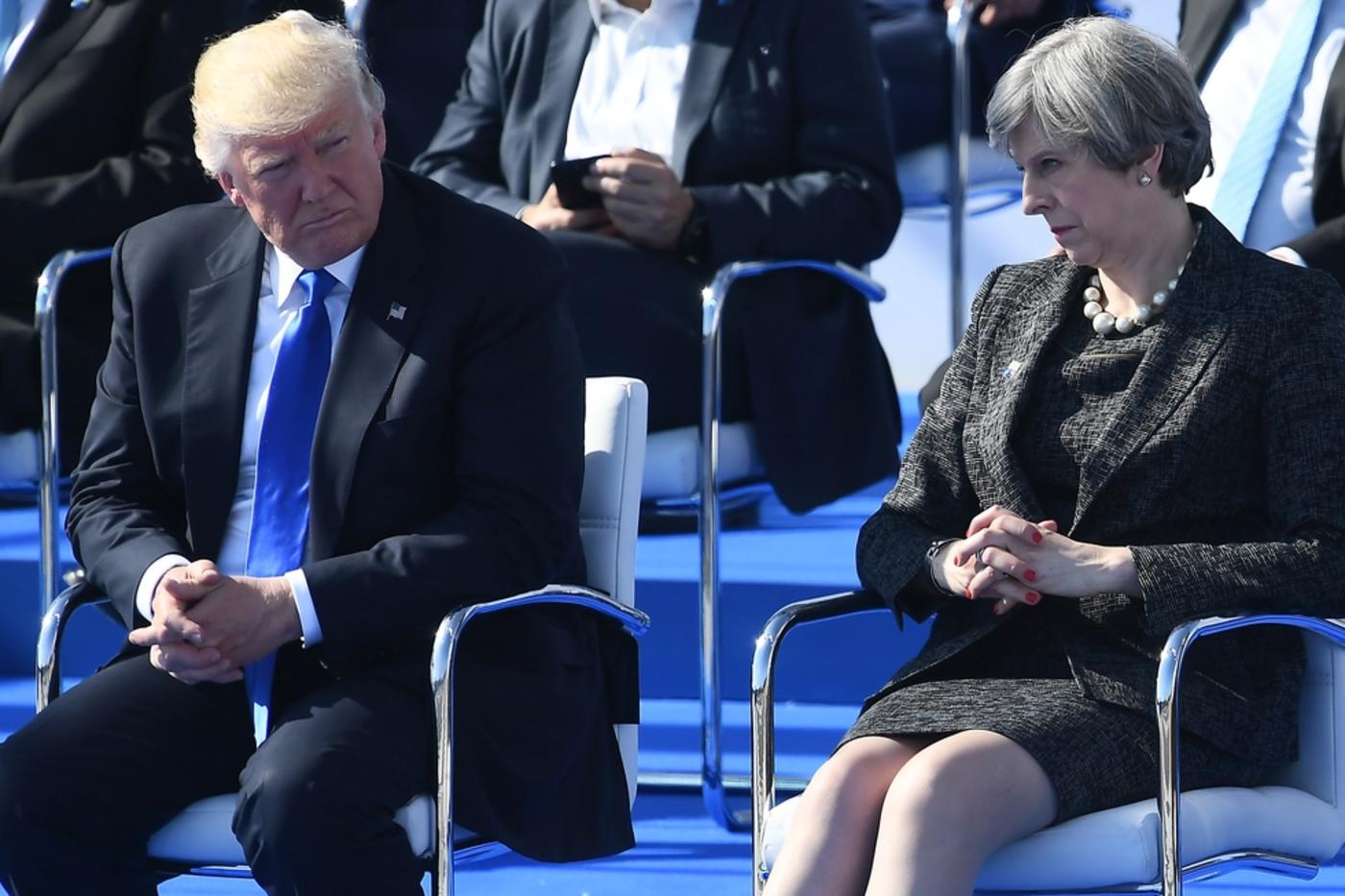 It's a long time since a British prime minister publicly distanced himself/herself from a major foreign policy announcement by a US president. But that's what British Prime Minister Theresa May found herself doing last week when Donald Trump announced his support for Israeli claims on Jerusalem as its capital.

May said she disagreed with Trump's move and reiterated Britain's position that the city should be the shared capital of Israel and Palestine in a negotiated two-state solution.

The myth of the special relations

Barely a week before that May had to take to the rostrum, twice, to criticise Trump for retweeting remarks made by one of the leaders of the UK fascist sect, Britain First. This, in turn, led Trump to tweet: "@Theresa_May, don't focus on me, focus on the destructive Radical Islamic Terrorism that is taking place within the United Kingdom."

And all this before we know for sure whether Trump's on-off plan to visit the UK seems to be on again. But whether or not the president steps off Air Force One onto British soil in 2018, the question is already being asked, will he give the kiss of death to the much talked of - but little understood - special relationship?

The special relationship between the United States and the United Kingdom has always been as much myth as reality. But it is a myth that has served both sides well.

As British imperial power waned and American imperial power waxed during and after the Second World War, it became convenient for political establishments on both sides of the Atlantic to claim a unique affinity. This was especially true during the Cold War.

For the US, the British provided a platform from which to influence Europe politically, militarily through NATO, and as a base for investment

The alliance against Hitler and what Oscar Wilde called "the barrier of a common language" added lustre to the story, but important elements of the real history were always distorted.

Consider a few of moments in our "common history": Unlike any other major ally the Americans fought an anti-colonial war against Britain in order to become an independent state in the first place, and the British government backed the South in the Civil War that defined the US as a nation.

Despite a Hollywood myth, the US had been a reluctant - and late-arriving - ally in the two world wars of the 20th century. Indeed, Nazi Germany declared war on the US, not the other way around, only after the Japanese attack on Pearl Harbour.

Even at the height of the Cold War, the US unceremoniously pulled the plug on the UK's Suez adventure, making it absolutely clear who was top neo-colonial dog in the Middle East.

The Greeks to the Romans

But, despite all this, in the British Foreign Office to this day the view prevails that the British are to the Americans what the Greeks were to the Romans: The wise former great power advising the new and more brutal empire on the ways of global governance.

This massively self-flattering description disguises the fact that the real reason why the British establishment needed a special relationship with the US was that its own imperial past had bequeathed it an economy far more international than most of its European post-war competitors.

It needed a global military umbrella capable of protecting this internationalised (and increasingly financialised) economic profile. The US was the only state able to provide it.

For the US, the British provided a platform from which to influence Europe politically, militarily through NATO, and as a base for investment.

As far as the new emerging challenge from China was concerned the UK had virtually nothing to offer the US, although that has not prevented the current UK government from opening a base - in Bahrain - for east of Suez operations for the first time in two generations.

By the time of the Iraq War in 2003 the British were so incidental to the US military operation that, as we now know, both President George W Bush and his secretary of state, Colin Powell, told the Blair government that they could bail out of the invasion if domestic pressures were too great for them.

It was Blair's hubris that kept Britain in the operation, although the political cover was no doubt welcome in Washington.

In the wake of the failures in Afghanistan and Iraq, the special relationship has suffered further deterioration. The Libya intervention, urged on a reluctant Obama by then prime minister David Cameron and other European leaders, turned to dust.

Obama made clear his regret at ever having signed it off. Cameron was then defeated by the Ed Miliband-led Labour Party in his first attempt to get parliamentary approval for bombing in Syria, thus giving a risk-averse Obama the occasion to delay US involvement.

How will a Trump visit be treated by a Labour opposition whose leader and Mayor of London have been personally insulted by him?

Trump's campaign statements were critical of NATO, the lynchpin of the special relationship, even though the US foreign policy establishment has hauled him back to a more traditional stance once he gained office.

More generally May's ill-judged rush across the Atlantic to be the first European leader to hold hands with the new president has only served to underline how broken the special relationship has become.

May's visit was hugely unpopular in the UK, even though a hundred and one other May disaster moments have now overshadowed it. Trump's recent retweet of posts by the fascists of Britain First and the decision to recognise Jerusalem as capital of Israel have only deepened public opposition to Trump in the UK.

And then there is the sorry story of the state visit itself, offered to Trump by May on that first meeting in the White House. That met with a chorus of disapproval in the UK so great that the visit was soon downgraded from a full coach-and-horses, room-at-Buckingham Palace, state occasion to a mere working visit.

Trump let it be known that he wouldn't come anyway if he was to be greeted by protests.

Now it seems that provision has been dropped and a working visit to open the new US embassy in Vauxhall is maybe planned for late February.

It is very difficult to see how the weakened-to-breaking-point May government can emerge well from this. The visit is, and will increasingly be, unpopular. There will be protests, quite possibly very big protests.

One thing is certain: the already threadbare special relationship will be in an even worse state by the time Donald Trump mounts the steps to Air Force One and leaves the UK

How will a discredited May government police those protests? When George W Bush visited the UK in the wake of the invasion of Iraq, the CIA initially attempted to insist that every tube station in central London be closed, that snipers be positioned on roof tops and protesters kept away from Downing Street.

Neither protesters, nor ultimately the British authorities, were willing to allow that to happen. But how will May police protests when Trump comes? Lightly, and risk renewed outbursts from President Trump while he is on UK soil? Heavily, and risk a backlash that could be the straw that disables the Tory government camel?

How will a Trump visit be treated by a Labour opposition, many of whose leading members are not only deeply opposed to him but whose leader and mayor of London have been personally insulted by him?

This and a thousand other problems loom as the most unpopular US president ever heads toward these islands. One thing is certain: the already threadbare special relationship will be in an even worse state by the time Donald Trump mounts the steps to Air Force One and leaves the UK.

- John Rees is a Visiting Research Fellow at Goldsmiths, University of London, and a national officer of the Stop the War Coalition

Photo: Prime Minister Theresa May (R) look on during the NATO (North Atlantic Treaty Organization) summit ceremony at the NATO headquarters, in Brussels, on May 25, 2017 (Justin Tallis/AFP) 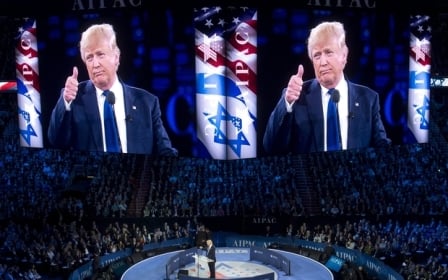