Gossip, matchmaking and self-care: The last hammams of Cairo

Traditional bathhouses were once an integral part of Egyptian society, where residents met to gossip, socialise and treat ailments 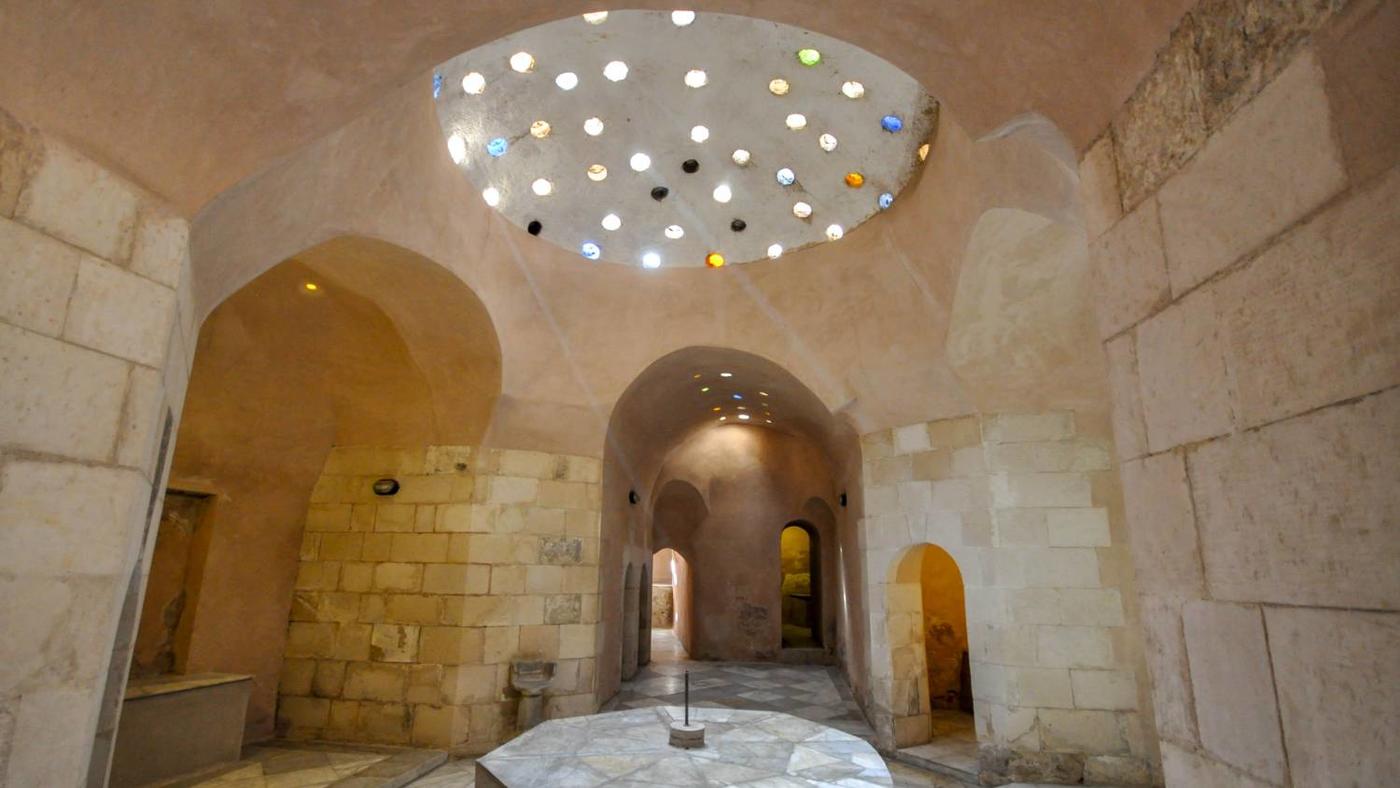 Tucked away on number 40 of a bustling street in Cairo’s El-Gamaliya district sits a well-worn building that retains some signs of past grandeur.

Its narrow, modest door, framed by majestic decorations and reliefs, leads to an interior hall which, with its spaciousness, high ceilings and calm atmosphere, contrasts the front of the building .

Here is the Hammam Margoush, a neighbourhood institution once said to have been known as the Hammam Suwaid after its founder, a prince by the name of Izz El Din.

With its long history, dating back several centuries, the hammam stands today, despite its obvious decay, like a relic of the area and the city.

The present building of the Hammam Margoush dates from 1780, in Ottoman Egyptian times, according to a detailed catalogue of the monuments of historical Cairo compiled in 2004. But it could well be that the hammam was operating even earlier.

Hajj Shaikhun, its owner, explained that his family bought the hammam back in 1887, shortly after his grandfather and his three brothers moved to Cairo from Istanbul. In total, the family came to run five hammams in the city, which were then passed on to the next generation.

“I've been working in this hammam since I was seven, and now I am 80. I used to come with my grandfather and then my brother. And when he died, I became (solely) responsible,” he said.

The place was so well known that in 1973, the Egyptian film director Salah Abu Seif set the film Hammam Al-Malatily there. In the movie, a young Egyptian settles in the capital in search of new opportunities and lives in the hammam, getting entangled with the prostitutes and gay people who visit the place.

It is a reminder that Cairo, like many other cities in the region, from Morocco to Turkey, was once home to dozens of such establishments. Hammams formed an integral part of its urban and social fabric, before disappearing almost completely.

“If Al Azhar is a thousand and something years old, then hammams started to spread in the area soon after, perhaps around 800 years ago,” Shaikhun told Middle East Eye.

Shaikhun, however, claimed that the place was already famous well before the film.

“Hammams were very popular, and so it was the Hammam Margoush, from the beginning of the street to the end of it,” he stated.

In the past, clients included local intellectals, such as one Amin Beh al-Mahdi, who would attend the hammam every Thursday with friends playing the oud.

But in recent decades, Shaikhun said, the number of customers has declined sharply, making it difficult for him to maintain the facilities.

“Now the future is in the hands of God. One, two, ten, a hundred more years. God knows.”

Some date the origin of bathhouses in Egypt to the beginning of the Ptolemaic period, at around 300 BCE, when the Greeks brought to this part of the Mediterranean the tradition of public baths.

The first archaeological evidence of this late Ancient Egyptian legacy began to emerge from under the ground in the early 20th century, when Evaristo Breccia, then director of the Greco-Roman Museum in Alexandria, discovered the first recorded public baths in Taposiris Magna, a city established by Pharaoh Ptolemy II.

When the Romans arrived in Egypt, taking over from the Greeks, the bathhouses retained their importance - albeit with a somewhat different layout - not only as a place associated with health, cleanliness and self-care, but also as a centre of social life.

“[These public baths were] of great importance to the development of more widely-used hammams of later eras,” Mona Raafat and Randa Alaa El-Din, two professors at Helwan University who have studied Cairo’s historic hammams, told MEE via email.

Against this background, it is not surprising that with the advent of the Islamic period in Egypt, hammams became an integral part of the urban and social fabric of its cities.

It is rumoured that the first public bath to be built was in the city of Fustat, later absorbed by Cairo. It was called Hammam al-far - or the hammam of the mouse - as it was a much smaller place than the Roman baths which had been built in the city previously.

Raafat and Alaa El-Din said that the heyday of the hammams came during Egypt’s Islamic era, especially between the 13th and 16th centuries, coinciding with Mamluk rule.

And both noted that hammams continued to be very popular until at least the 19th century.

At one point in the middle ages, hammams in Cairo were so well-known that Abdel-Latif al-Baghdadi, an Iraqi physicist who visited the city in 1231, wrote in his travel account that the capital’s bathhouses were the most “beautiful, spacious and well-planned of the Orient”.

An outstanding example of this is the Hammam Inal in medieval Cairo, built in the mid-15th century and restored and turned into a museum around 2002.

By this time, hammams had already established themselves as one of the most important places for Egyptians to socialise: a place where gatherings and celebrations took place, gossip flowed, matchmaking proposals were discussed and political chatter was held.

They became an inseparable component of a neighbourhood, just like water dispensaries or mosques.

“During these times hammams were considered a social hub for the Egyptian community, especially women,” Raafat and Alaa El-Din said.

“[There were] many exciting things to do, like looking for spouses for sons, gossiping to catch up, and having some relaxed time away from the home chores while also benefiting from a good scrub,” they added.

The layout of a bathhouse

The structure of a hammam in Ottoman times typically consisted of three main spaces, which began with discreet entrance framed by a facade with refined decoration like that of Hammam Margoush.

The first room often had a high wooden ceiling and was the place where clients would usually get ready, dress and undress, and where they would socialise the most.

Then there was a small, warmer transition chamber where people would prepare and wrap themselves with towels during the coldest season of the year.

And next was the main bathing space, the hot chamber, often organised around a hot water fountain.

The heart of the bathhouse was its furnace, responsible for heating the entire space and the water.

The boiler was also environmentally ideal for the neighbourhood: it was used to dispose of solid waste, cook food such as ful, and the resulting ashes were used in the construction sector.

There were also two types of hammams; twin hammams, which were often located in busy areas such as those near a market and had a compartment for women and another for men that operated simultaneously.

Single hammams, which used to be smaller, wee hidden in residential areas and operated in turns: women in the morning and men at night. The Hammam Margoush, for example, still maintains this system to this day.

Exactly how many hammams there were in Cairo in its heyday is difficult to ascertain because of the popularity they came to acquire - and the myths built around them - but there have been several attempts to document them over the past few centuries.

In the early 15th century, the Egyptian historian Taqi al-Din al-Maqrizi identified 52, and a traveller from the 18th century counted as many as 80 in his memoirs.

Then, in the early 19th century, the French expedition that occupied Egypt documented 72 hammams. And the British orientalist Edward W Lane - who wrote an account on the manners and customs of modern Egyptians in 1830 - counted between 60 and 70.

More recently, in 1933, French designer Edmond Pauty stated that there were some 47, and three decades later the historian Andre Raymond recorded 33 functioning hammams.

During the second half of the 20th century, it seems that no popular hammams were built in Cairo, so it is not surprising that, when architect Nicholas Warner documented and mapped the area of historic Cairo in detail, he located only 19, most no longer used.

Another one was identified by the architecture group Mimar shortly after, and  another four by the Egyptian Najwa Abdul-Moneim in 2007. Of these, only six were still in use.

Now, Shaikhun from the Hammam Margoush said there are only five historic hammams still operating in Cairo, leading many to believe that they are on the verge of extinction.

The reasons for this dramatic decline have been many and varied.

Some argue that the spread of better sanitation and more efficient water systems throughout the city contributed to the decline of hammams in the face of private facilities, as might have Egypt’s greater exposure to other cultures.

“The main reasons for the decline could be related to people seeking more hygiene or privacy in their own homes,” Raafat and Alaa El-Din noted.

It is also considered that the decline of hammams is partly due to the fact that the people who began arriving in Cairo from rural backgrounds were not familiar with the tradition.

And that at the same time, the upper and middle classes have been abandoning the historic districts of the capital where hammams are located.

Furthermore, the high maintenance costs associated with these facilities, coupled with new public regulations, have become an additional burden for their owners.

A 2010 study on the reasons people chose or declined to go to hammams found that those who went highlighted their health, beauty and social benefits, while those who did not said they were reluctant due to their bad reputation, poor hygiene and lack of privacy.

Some fear that, with the disappearance of hammams in Cairo, an important part of the city’s popular heritage that once contributed greatly to its social and cultural life is now at risk.

“The importance of their heritage and tradition is quite obvious [given] their amazing aesthetics, beauty, memory, building technology,” architect Dalila El-Kerdany, who has studied the historic hammams of Cairo, told MEE.

“And hammams have proven health benefits: they (are useful) in many health issues, such as rheumatic pains, skin dryness, respiratory problems, common colds,” she added.

Raafat and Alaa El-Din, however, are still optimistic: “We don’t believe that the communal baths in Egypt are going to [completely] disappear.”

“They continue to be an integral part of the intangible cultural heritage practices for a wide segment of Egyptians who visit these baths on special occasions such as weddings, engagement parties, birthdays, or as a part of their cleanliness routine,” they noted.

Experts like Kerdany argue that hammams could still play an important role today if given the chance. “The traditional hammams are commonly located in old, underprivileged quarters, so they could play a role in developing their communities.”

And Shaikhun noted that they are also trying to adapt to the new times by making changes and expanding their services by adopting healing practices to improve blood circulation and formally serving as matchmakers.

Some argue that Cairo only needs one success story to halt the decline of historic hammams which may still have an important role to play in society. 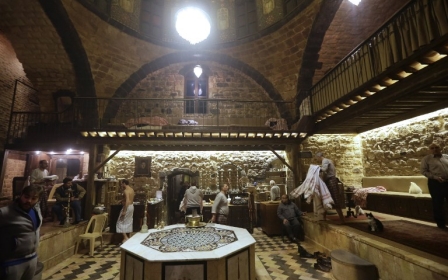 Syria War
In Damascus, an old solution to water shortages: The hammam 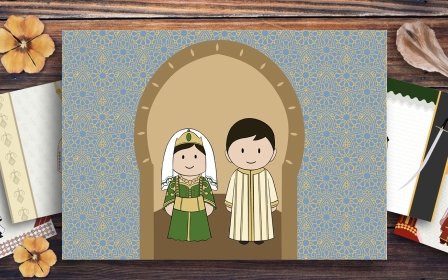 Culture
Kaftans and hammams: An inside look at Moroccan weddings 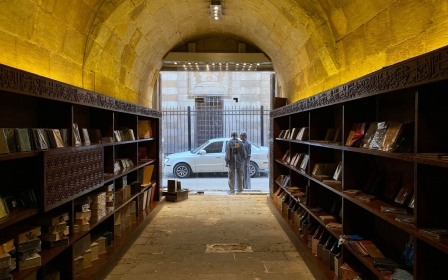 Books
The booksellers of Cairo: An urban trail of eight of the city's antiquarian bookstores