Inside the medieval castle that survived a 21st century war 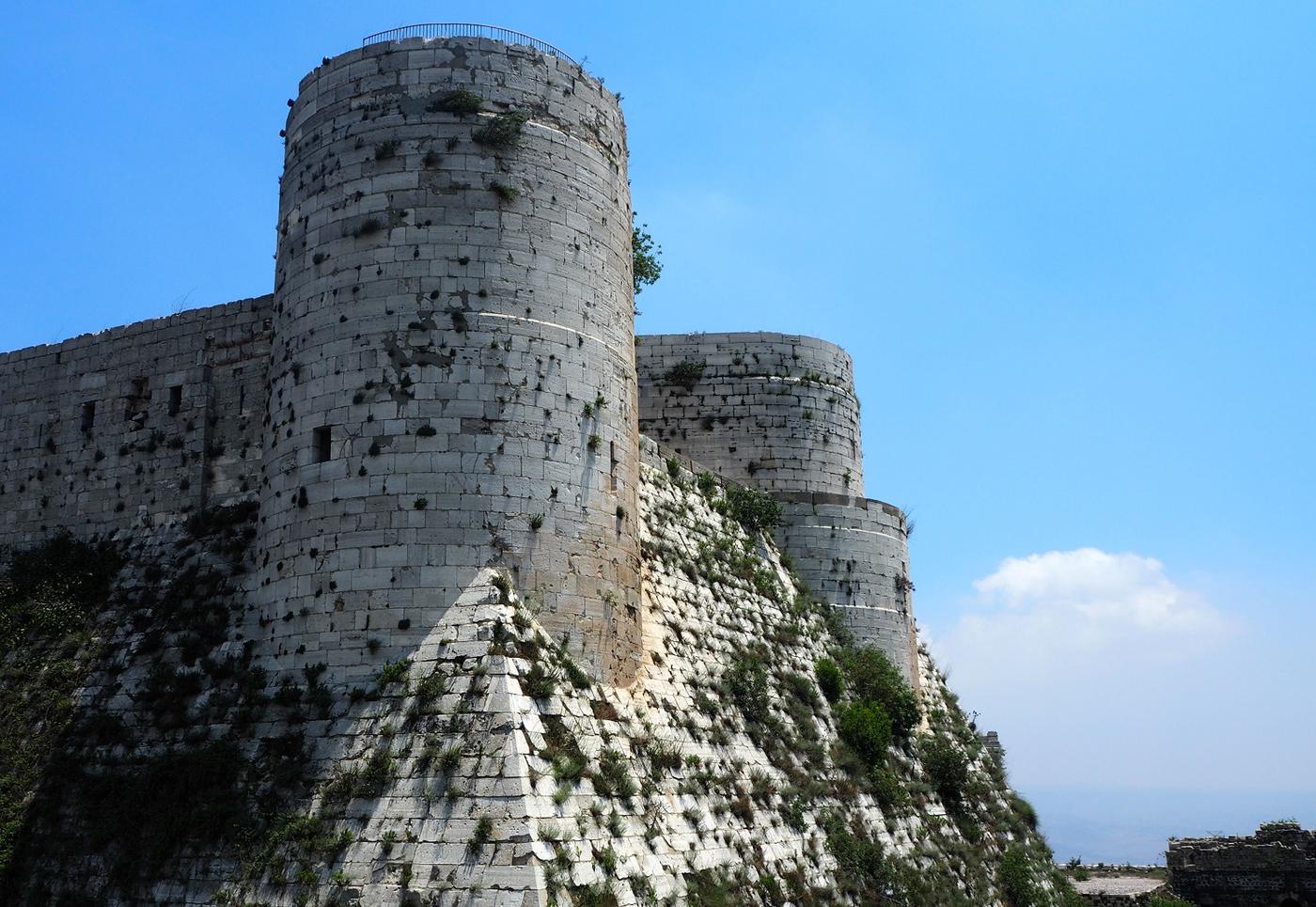 Even under Syria's intense sun, the windswept summit of Krak des Chevaliers is cooled by breezes that whip through arrow slits cut into the heavily-fortified structure.

It stands as it has for more than 900 years. Traces of its recent civil war history - including the Russian graffiti of Chechen rebel fighters, bullet holes and the scarred outlines where a now-vanished medieval stairway once stood - merge with the past.

Water snakes swim along the surface of green water in the moat, one of the few not overgrown. A praying mantis sways far beneath a pair of broken lion reliefs. Tree frogs leap alongside the overgrown walls and over medieval catapult balls, so heavy that they can barely be lifted by one man.

And day and night, that wind whips through the empty windows on the highest points of this impregnable fortress, still fit for its original purpose.

Although fairytale to the modern eye, Krak des Chevaliers is no romantic castle of kings and maidens. Instead it is a fortification originally constructed to house 3,000 medieval Crusader knights protecting well-trodden pilgrim and trade routes snaking through Roman Christendom.

Built originally for the Emir of Aleppo in 1031, it was taken over and extended by the military order of the Hospitalier Order of Saint John of Jerusalem in 1144 who added a new outer defensive wall. It stood on the frontline between the European Crusader forces and the Muslim armies of the region, eventually falling to the Mamluks in 1271.

Situated just over 30km west of Homs, it is now a Unesco World Heritage Site and remains a feat of extraordinary military engineering.

Krak des Chevaliers, which TE Lawrence - better known as Lawrence of Arabia - described as "perhaps the best-preserved and most wholly admirable castle in the world,” used to attract five million visitors every year, according to the castle's manager, Naima Mohartem. The record was 9,693 in one day in April 2009.

"People would come to Syria just to visit this castle, and wouldn't even visit Syria's other historic sites such as Aleppo Citadel or Palmyra," she told MEE.

The castle attracted independent travellers, large groups from cruise ships and international art and architecture students - as many as 300 at a time - who would spend entire days sketching the castle.

The cruise ships and international students are no more: with the outbreak of Syria's civil war in 2011, the country's former role as a Middle Eastern spot favoured by tourists and Arabic-language students ended.

'To see this breaks my heart'

But now the castle has reopened, and visitors are gradually returning, mainly from within Syria itself. Groups of up to 50 Syrians make the hours-long journey from the country's south on day trips, piling out of buses and fanning out among the ruins to pose for selfies with stunning views falling away behind them.

"I'm so happy to be here again, after seven years," said Manal, a school-teacher from Saidnaya, near Damascus. "We used to come every single summer, often three or four times."

She paused at the top of a steep passageway. Gesturing towards a spray of bullet holes in the limestone walls, her eyes welled with tears.

"To see this breaks my heart, and I'm very sad that our history has been damaged but, actually, I'm relieved to see that not very much has changed."

Entrance fees for Krak des Chevaliers used to be 200 Syrian pounds (around $4 in early 2011) for foreign tourists, 50 SYP for locals and 20 SYP for teachers. Since reopening, it has been free. A pair of Syrian soldiers guard the entrance, welcoming visitors with smiles and fading leaflets.

Few international visitors have come during the last eight years. Naima said the first was Alexandre Goodarzy, head of the French NGO SOS Chrétiens d’Orient, who came "to see if the castle was still standing," as many reports had claimed it was badly damaged or even destroyed in the fighting.

The full visit used to last seven hours but, with undergrowth concealing poisonous snakes, it is not currently available

The NGO has since organised regular volunteer groups, mainly young people from France, to clear the excessive undergrowth. With limited funds available, keeping the sprawling site's grounds in order is almost impossible for the handful of staff who are now back running the government-owned castle.

Despite the travel advice of the French foreign ministry, this year a French travel agency started offering 10-day tours to Syria, taking in Krak des Chevaliers among other sites, at a cost of €3,000 (around $3,380).

Visitors can wander among the ancient walls, although castle staff - expert archaeologists who have worked at the site for years or even decades - will give generous tours for those interested in the castle's rich history.

The full visit - not for the faint-hearted - used to last seven hours but, with undergrowth occasionally concealing poisonous snakes, is not currently available. International sanctions still placed on Syria mean that the nearest anti-venom available is in neighbouring Lebanon, which involves negotiating a complicated and time-consuming land border.

The mystery of the vessels

On most days the castle is relatively quiet, but it is coming back to life. A team of Hungarian archaeologists has started working at the site, already making new discoveries.

"Using geo-radar, they found under-floor canals, so we decided to excavate," said Hazem Hunno, a civil engineer and head of architecture at the castle.

He shows the remains of large pottery vessels sunk into the floor in the centre of the structure. The medieval water-systems, which collected every drop of rainwater and then channelled it into reservoirs for the dry summer months, have long intrigued archeologists. These finds were an exciting new development.

"We don't know what these were used for," said Hummo, "but our history books say injured soldiers were brought here for treatment, so we think maybe they used these pots for making alcohol for medical, disinfection purposes."

An annual cultural performance, held at Krak des Chevaliers for a decade before the war broke out, has also returned.

In 2018 the castle was illuminated with hundreds of lights for a single night. To a receptive audience of around 2,000 people, actors, dancers and school children depicted some of the castle's most important historic events. It culminated in Syrian army soldiers scaling the tall walls with ropes, depicting the recapture of the castle by government forces in March 2014.

Krak des Chevaliers was taken by opposition forces in spring 2012. For two years, castle staff say, it was used as a rebel command and control centre, a weapons storage facility, and as a transit base for foreign fighters entering the country from Lebanon, around five miles away - its location still as strategic as it had been for the Crusaders.

According to residents from the war-battered town of al-Husan, which tumbles down the hill beneath the castle, ordinary Syrian rebels were not allowed within its walls.

The rebels also knew that Krak des Chevaliers historic importance would prevent it from being bombed, making it a resilient military base, although it was hit by air strikes in 2013.

In 2014, as government forces closed in, most of the 133 rebels inside struck a deal to flee to Lebanon, leaving just 17 foreign fighters holding the castle.

Although Krak des Chevaliers' feat of impressive military engineering was originally its appeal to rebels, it also proved to be its eventual downfall.

The castle's 800-year old defences were, somewhat incredibly, still effective against modern warfare, but require a minimum of 100 fighters to adequately man them, according to Hunno. Even equipped with modern weaponry, the 17 rebels did not stand a chance.

As government forces closed in, the remaining rebel fighters could only impede the inevitable Syrian army advances by blowing up medieval doorways and staircases, leaving them full of rubble and explosives.

"Krak is very strong, built for military defence, and no army has been able to militarily defeat it in its whole history," said Hunno. During the medieval period, victories were only achieved by siege and surrender once Crusader rule in the Middle East started to collapse.

"Even in modern history, between 2012 and 2014, it was very difficult to liberate the castle from outside because it is a very strong and complex building," said Hunno.

What the rebels destroyed

Krak des Chevaliers' original defences included two moats, an outer castle and inner castle, much of which still stands. Each had three entrances reinforced with two different types of doors. A labyrinthine network of steep, narrow passageways inside the walls left any attackers vulnerable to defending forces.

The sensitivity with which Syrian government forces approached retaking the castle was praised by Krak des Chevaliers' staff. Living in nearby villages, the workers never left the area and started work on cleaning the castle two weeks after it was seized, a task which took them four months.

Castle staff said that opposition forces had looted, ransacked and set ablaze offices and left mounds of broken masonry filling arched doorways. The rebels also set fire to large quantities of diesel in the ancient heart of the castle, badly burning the building.

"The Knights Hall was blackened with smoke from the fire," said Hunno, "but luckily, we were able to start work within weeks, so the fire had only caused surface damage and hadn’t absorbed into the stone."

A medieval staircase, blown up as part of the rebel defences, is now gone forever. Several sections of the castle left unsafe by fighting and explosions have been stabilised with wooden scaffolding, pending available funds to support more extensive rebuilding efforts.

A Catholic Hungarian university has contributed towards the 50 million SYP ($232,000) it will  cost to rebuild the ceiling and corner of the chapel, which was damaged in an explosion. The castle is kept running with an annual 1 million SYP ($4,650) stipend from the government, a sum that Mohartem anticipates will increase once the war is finally over.

The art of the Crusaders

In its World Heritage listing, Unesco states: "Krak des Chevaliers is taken as the best preserved example of the castles of the Crusader period, and it is also seen as an archetype of a medieval castle particularly in the context of the military orders." Despite the recent conflict, the castle retains this accolade.

"We've actually lost very little of the structure, and Krak remains the best-preserved castle from the Middle Ages anywhere in the world, retaining 90 percent of its original shape," Hunno said.

The castle is also one of the very few sites where Crusader-era art is still visible. Its chapel was once richly painted, and a handful of medieval frescoes, dating from the late 12th and early 13th centuries, survive.

Fragments can be seen inside the chapel, discovered in the 20th century when existing plasterwork and paint decayed, although their preservation from damp and decay remains an ongoing challenge.

"My heart lies in this place and this place has my heart," said Mohartem, gazing out from the battlements across the views the castle affords.

Amid the rolling hills and valleys, residents have begun to return to Al-Husan and modest attempts to rebuild have started. A handful of gardens already overflow with well-tended flowers, while small herds of sheep graze between the ruins.

"Our message is that we are here, we stayed here throughout the war, and here we will remain," said Hunno. "Yes, we had war, and yes the castle suffered some damage, but we are still here and we are starting to recover." 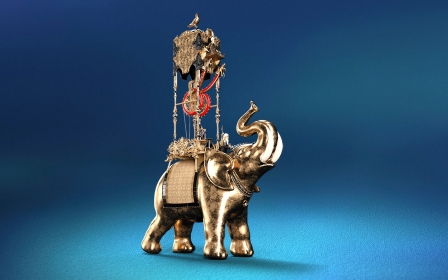 Heritage
Medieval robots: How al-Jazari's mechanical marvels have been resurrected in Istanbul