Athletes from 11 states across the region brought home dozens of medals and provided audiences with some of the most memorable moments from the games. 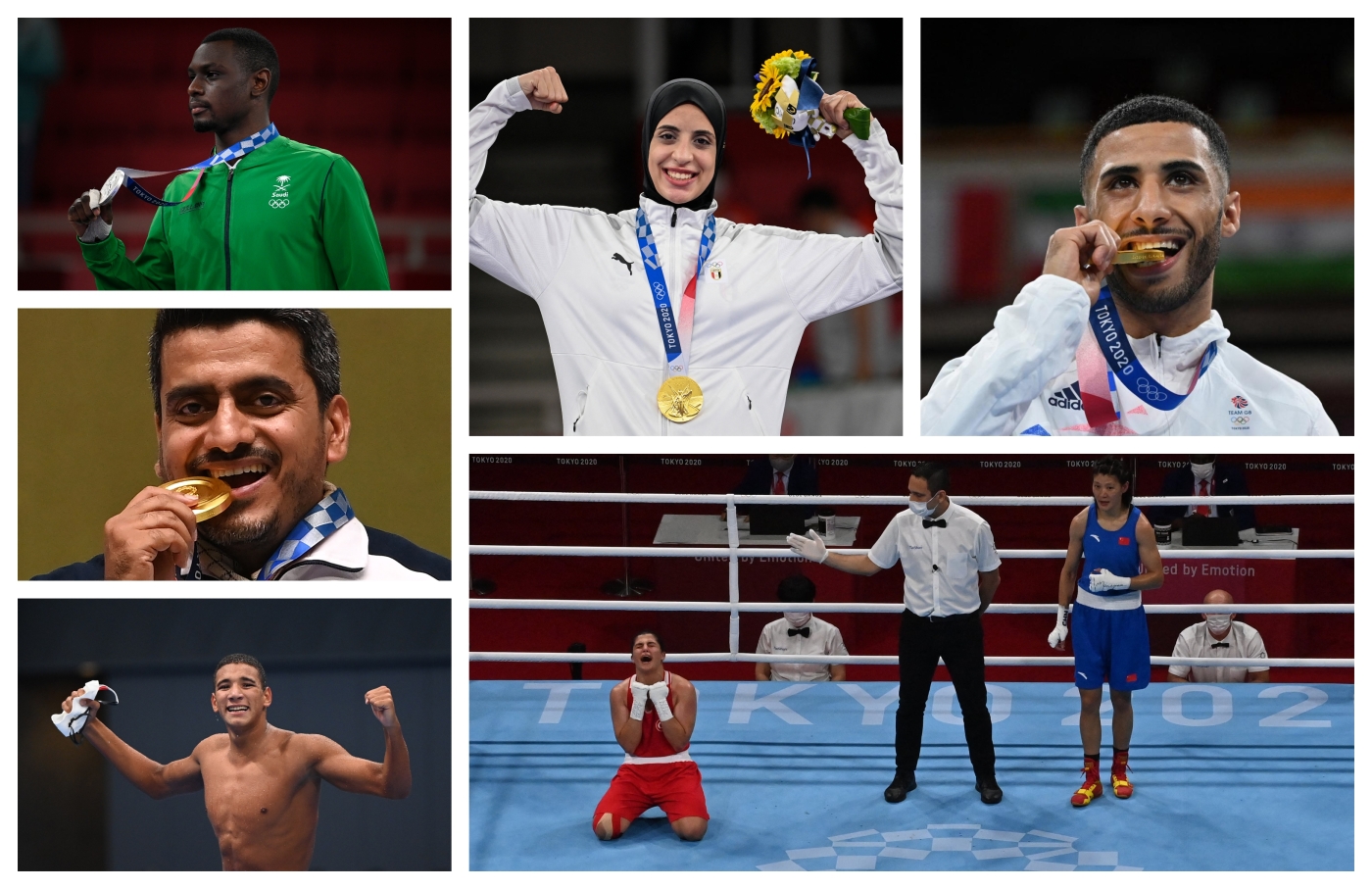 The Tokyo 2020 Olympics closing ceremony took place on Sunday, bringing to an end a feastly fortnight of sporting action that many feared may never have ended up taking place.

The games were delayed by a year and were mostly contested without spectators because of the ongoing Covid-19 pandemic. But that didn’t stop millions of people from around the world from tuning in and celebrating. 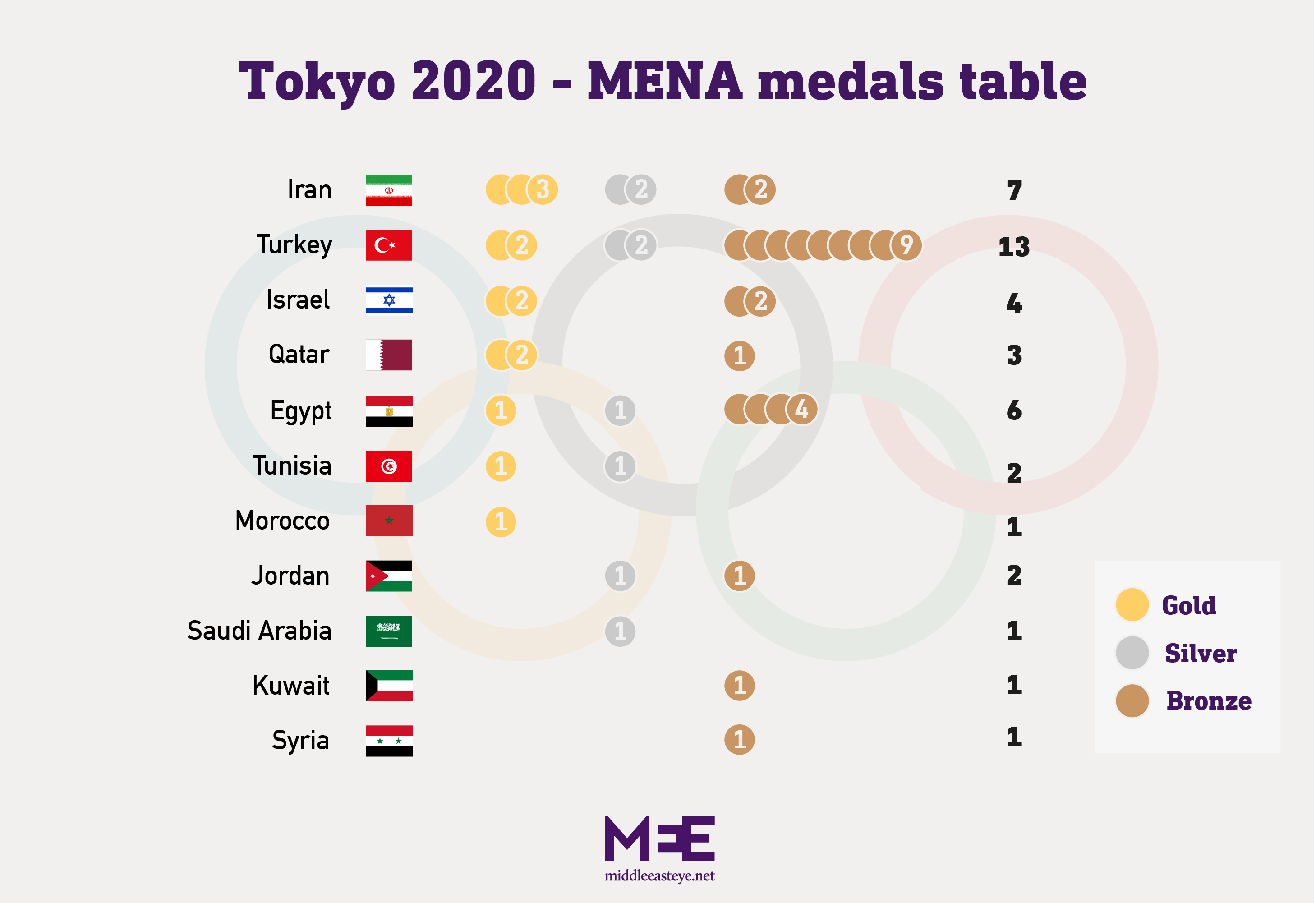 Athletes from 11 countries across the Middle East and North Africa won medals with the region's contenders providing no shortage of surprise, elation, and controversy.

'Can we have two golds?'

In what will go down as one of the most heartwarming moments of this year’s games, Qatar’s Mutaz Essa Barshim and Italy’s Gianmarco Tamberi decided to share a gold medal in the men’s high jump.

Both men had cleared all heights up to 2.37m with no failures, putting them in joint first place. The bar was then set at an Olympic record height of 2.39m, which they each failed to clear in three attempts.

This left nothing to separate Barshim and Tamberi, with a jump-off likely to ensue to determine the gold.

At this point, Barshim asked an official: “Can we have two golds?”. When the official replies that it was possible, both athletes instantly embraced and jubilant scenes followed.

The Italian and Qatari have been close friends for over a decade, making the moment even more special. The victory completed Barshim’s set of Olympic medals, having won bronze in London 2012 and silver in Rio 2016.

“He told me that what I did was a great thing, sharing the gold with my Italian friend,” Barshim said. “He said that this will go down in history.”

On the final weekend of Tokyo 2020, Feryal Abdelaziz wrote her name into Egyptian sporting folklore by becoming the first woman from the country to win Olympic gold.

A video widely shared on social media showed Abdelaziz’s family nervously watching her semi-final bout, before erupting with joy when she secured the win.

It rounded off Egypt’s most successful games, having also picked up bronze medals in wrestling, karate, and two in taekwondo.

Abdelaziz was among three Egyptians, including Hedaya Malak and Giana Farouk, who garnered widespread praise on social media for being among a handful of hijabi women to have won Olympic medals.

Elsewhere, Ahmed Elgendy won a silver medal in the modern pentathlon, after coming agonisingly close to winning the gold. The Egyptian was overtaken in the final moments of the laser run (the final event of the pentathlon, which combines running and shooting) by Britain’s Joe Choong.

The sight of two siblings competing at the same Olympics is not uncommon, with the likes of the Williams’ sisters in tennis and the Brownlee brothers in triathlon starring in previous games.

But images of two Syrian brothers embracing at the opening ceremony two weeks ago were particularly significant, as one was representing the refugee team and the other competed on behalf of the official Syrian team.

The most beautiful image from the #OpeningCeremony are the two #Syrian brothers, who were reunited @Olympics: Alaa Maso, member of the #RefugeeOlympicTeam hugs his brother, Mo Maso. Iraq, Syria, Lebanon, Palestine, the story of families torn apart is the same. #RefugeesWelcome pic.twitter.com/Ll9i05Vm18

Alaa Maso from the Refugee Olympic Team, featured in the swimming 50m freestyle, while his brother Mohamad Maso took part in the men’s triathlon.

Both siblings are originally from the city of Aleppo, but left for Germany in 2015 after the Syrian civil war threatened their safety and damaged training facilities. Mohamad finished 47th in the triathlon, while sibling Alaa came fourth in his swimming heat.

Syria won one medal at Tokyo 2020, as weightlifter Man Asaad picked up a bronze.

The refugee team did not win any medals, with dissident Iranian taekwondo athlete Kimia Alizadeh narrowly missing out on a bronze, after having defeated two-time Olympic champion Jade Jones.

Mohammed Hamada made history by becoming the first-ever Palestinian to compete in weightlifting at the Olympics.

Hamada, who is from Gaza, left the besieged enclave several weeks before the tournament, to ensure that he did not face travel issues at the hands of Israeli authorities.

The 19-year-old competed in the 96kg weight category, lifting a total of 310kg, which placed him fifth out of five in Group B.

Elsewhere in the Palestinian team, Hanna Barakat competed in the women’s 100m on the athletics track, while Wesam Abu Rmilah took part in the men’s judo.

There were two entrants in the swimming competition, with Dania Nour in the women’s 50m freestyle and Yazan Al-Bawwab in the men’s 100m freestyle.

Palestine has competed in the Olympics since 1996, but has yet to win its first medal.

The participation of Israeli athletes, and the decision of whether or not to compete against them, was a major talking point in Tokyo.

Algerian judoka Fethi Nourine withdrew from the games to avoid a potential clash with Israel’s Tohar Butbul in the men’s under 73kg competition.

"We have worked hard to qualify for the Games, but the Palestinian cause is bigger than all that,” Nourine said. 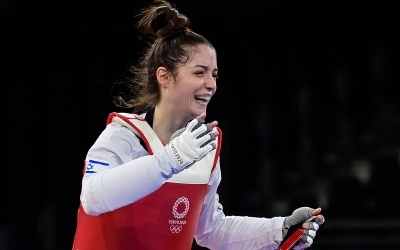 “My position is consistent on the Palestinian issue, and I reject normalisation, and if it costs me that absence from the Olympic Games, God will compensate.”

The athlete and his coach have since been suspended by the International Judo Federation and will face disciplinary action.

A second judoka, Sudan’s Mohamed Abdalrasool, dropped out of the competition too before facing an Israeli opponent.

She was widely celebrated by the Israeli Defence Forces (IDF) social media accounts and showed off her medal at the army headquarters in Alon, an illegal Israeli settlement in the occupied West Bank.

Israel finished the games with a total of two gold and two bronze medals.

The games got off to a bang when Tunisian swimmer Ahmed Hafnaoui won a stunning gold medal in the 400m freestyle.

The 18-year-old was the slowest qualifier for the final, making it through by just 14 hundredths of a second. That meant he started the final from lane eight, where few would have expected him to earn a podium finish.

Hafnaoui smashed his personal best time to win the race - beating several more experienced athletes - in what will surely go down as one of the most surprising victories of games.

“I was in tears... when I see the flag of my country and I hear the anthem in the background. It was great,” he said. “I’m so proud of it. I dedicate it to all (of) the Tunisian people.”

Hafnaoui received a hero’s welcome at Tunis airport last week after his victory provided a moment of joy and respite for a country that has been dealing with a third wave of the Covid-19 pandemic and an ongoing political crisis.

'How can a terrorist win gold?'

Not all medallists were graciously applauded by their peers. After Iran’s Javad Foroughi won gold in the 10-metre air pistol shooting event, South Korean marksman Jin Jong-oh said “how can a terrorist win first place? That’s the most absurd and ridiculous thing.”

Jong-oh, a six-time Olympic medallist, said it was “pure nonsense” that Foroughi was allowed to compete by the International Olympic Committee (IOC), given that he was a member of Iran’s Islamic Revolutionary Guard Corps (IRGC). The branch of the Iranian military has been labelled a terrorist organisation by the US since 2019.

Foroughi said he served in Syria as a nurse between 2013 and 2015, and first tried pistol shooting near the hospital he was working in.

The campaign group United for Navid, which was set up after the execution of Iranian wrestler Navid Afkari, condemned the victory.

“We consider the awarding of an Olympic gold medal to Iran marksman Javad Foroughi not only a catastrophe for Iranian sports but also for the international community, and especially the reputation of the IOC,” it said in a statement.

“The IRGC has a history of violence and killing not only of Iranian people and protesters there, but also innocent people in Syria, Iraq, and Lebanon.”

Iran was the highest placed nation in the overall medals table for the Middle East and North Africa, picking up three gold medals, two silvers, and two bronze.

Great Britain was one of the most successful nations at Tokyo 2020, picking up a total of 65 medals and finishing fourth in the overall standings.

Among those medallists were two Britons of Arab origin: Galal Yafai and Mohamed Sbihi. 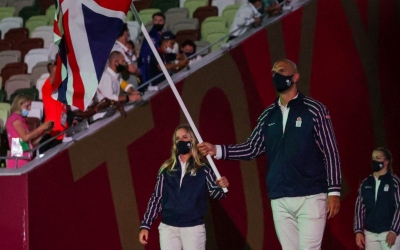 Yafai, who was born to Yemeni parents in Birmingham, England, won the men’s flyweight boxing competition with a split-decision victory over Carlo Paam of the Phillipines.

Two of his brothers, Kal and Gamal, are also decorated boxers, with the former holding the WBA super flyweight title from 2016 to 2020.

The 33-year-old made history by becoming the first Muslim to carry the British flag at the opening ceremony of the Olympics.

“To know I’m the first person of Muslim faith to have this role and duty is a very proud moment,” he said. “We need more representation and hopefully this starts that process of getting young Muslim kids involved in all types of sport.”

After going by his nickname "Moe" for years, Sbihi registered for Tokyo 2020 under his full name Mohamed, and requested that all media use it, as a way to inspire future generations of Muslims.

In terms of the total number of medals won, Turkey comfortably won the most in the MENA region with 13 podium finishes (almost twice as many as Iran, who were the next best with 7 medals).

This was broken down into two golds, two silvers, and nine bronze medals.

The two golds were important firsts for Turkey: Busenaz Surmeneli’s victory in the women’s welterweight division was her country’s first-ever gold in Olympic boxing, while Mete Gazoz’s triumph in the men’s individual archery event was its first gold in that sport, too.

The 13 medals were Turkey’s highest overall tally ever, beating their total of 12 medals at the 1948 Olympics in London.

Saudi Arabia won just one medal at this year’s games, a silver medal in the men’s karate kumite +75kg event.

But the final ended in controversy when Iran’s Sajad Ganjzadeh was handed the victory after Saudi athlete Tareg Hamedi was disqualified for an unchecked attack.

Hamedi had been leading Ganjzadeh 4-1, before he unleashed a high-kick to the neck which left the Iranian motionless barely a minute into the match, bringing the bout to an abrupt end.

The 23-year-old Saudi was officially disqualified for an unchecked attack, which is not allowed under karate's Olympic rules.

Hamedi, at first under the impression that he had won the match, celebrated for several minutes before being informed - after discussion among the officials on the sidelines - that it had been called for Ganjzadeh.

Hamedi later stated that he disagreed with the decision, but that he accepted it and was satisfied with his performance.

He received a hero’s welcome upon his return to Jeddah, with many Saudis on social media considering him to have been the gold medallist.

Hamedi’s medal was Saudi Arabia’s second-ever silver medal and its fourth medal in total. The Gulf nation is yet to win its first Olympic gold medal. 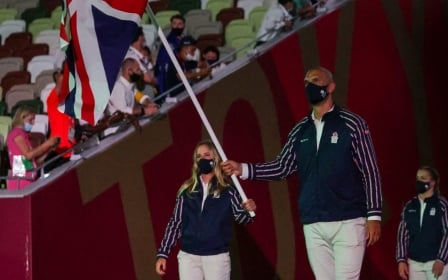 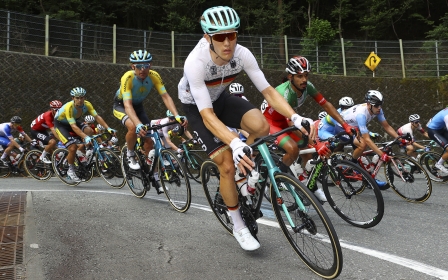 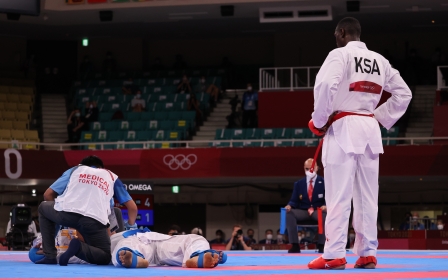