Puppets and puppet masters: Investigating the assassination of Malcolm X On 21 February 1965, Malcolm X was shot dead during an event in Harlem, New York City.

The radical Black Muslim leader was struck down as he was about to begin a speech in the Audubon Ballroom in Harlem.

Though three men were sentenced for his murder and the Nation of Islam (NOI) were largely blamed for the assassination, there has always remained a haze over the details, including allegations that two of the men, Muhammad Abdul Aziz (also known as Norman 3X Butler) and Khalil Islam (also known as Thomas 15X Johnson), were not involved in the crime at all. The third man, Talmadge Hayer, confessed.

The question of who killed Malcolm X has been a mostly scholarly debate for years. It is now the subject of a gripping Netflix documentary, Who Killed Malcolm X?, in which a small team of filmmakers follow journalist, historian and tour guide Abdur-Rahman Muhammad in his pursuit of the real perpetrators.

As the documentary makers and Muhammad begin digging through rare archival footage of Malcolm's life, FBI files, never-before-seen photographs of the iconic leader after the shooting and subsequent autopsy, it seems to become clear that the case hasn't been handled with the care it deserved.

When they conduct interviews with former FBI operatives who surveilled Malcolm as well as former lieutenants from the Nation of Islam (NOI), the reluctance to expose the truth becomes bewildering.

Rachel Dretzin and Phil Bertelsen, directors of the series, which took almost three years to make, describe the state's disinterest in exploring the readily available information about the identities of the real assassins as "startling".

"They hadn't even brought them in for questioning," Dretzin told Middle East Eye.

For those intimate with the story of Malcolm X, the questions, ambiguities and contradictions around his assassination are neither new, nor particularly novel. His meteoric rise and subsequent split with the NOI in 1964 left him with a number of enemies inside and outside the movement.

The FBI were not merely monitoring Malcolm, they were afraid of his powers of persuasion and his growing reputation and potential to unify African Americans.

Whereas it was always clear that the Nation of Islam had been infiltrated with federal and state agents, the series sheds further light on the way in which the FBI interfered and created a wedge within the movement and crucially, between Malcolm and Elijah Muhammad, the head of NOI.

But on the streets of Newark, New Jersey, it was common knowledge that the two men incarcerated for his murder were innocent.

It was also an open secret as to the identities of the true assailants. It turns out these names have long been known by the authorities, too.

In 1978, Hayer revealed the names of those he claimed were his accomplices, including William Bradley (who later changed his name to Al-Mustafa Shabazz), who he said fired the "kill shot" with a sawed-off shotgun. But Hayer's claims were dismissed and Bradley later rejected them.

The filmmakers say it is precisely that the information was out in the open that stirred their interest. The idea that an assassin was possibly walking the streets and held unaccountable was too startling to ignore.

"Very little information is in the public for the first time," Dretzin says. "For some reason, it has just been sitting there, gathering dust."

Bertelsen adds that the fact that the African American Muslim community in Newark were willing to accept the presumed reputation of this man speaks volumes in some ways about the community's perspective on the entire matter.

"There seems to be a full understanding of the role of government and law enforcement as being - if not responsible, then complicit in all of this. I know as an African-American, our distrust of law enforcement, particularly police, has a long and valid history," Bertelsen said told MEE.

"I think many within the Newark community accepted that this man - while partly responsible was not wholly responsible. That he was in fact - if he was involved at all - a pawn in all of this. And there were puppet masters at work."

Fear of a 'Black Messiah'

Though the Manhattan district attorney's office announced a review of the case based on the findings of the documentary, it is still unclear if there is actually any hunger to solve it.

The historical disinterest in pursuing it, the lack of transparency over the extent of the police surveillance of Malcolm X and the NOI and the continued refusal to confront the mountains of available evidence still piques the interest of ardent conspiracy theorists.

The murder of Malcolm X was no ordinary hit, after all.

It was a strike at the heart of a resurgent, militant, brave and outspoken Blackness in America. It was also a strike on the spread of Islam in America, too. They were scared of a "Black Messiah," as J Edgar Hoover, the head of FBI, put it.

African Americans make up the largest demographic within the Muslim community in the US, and Malcolm is seen as being largely responsible for that.

Though the show follows the groundswell in interest in Malcolm's place in the civil rights movement in America and as a vanguard of Black pride, the series is not skittish to platform the scepticism also associated with his rise following his removal from the Nation.

Former Nation members insinuate that Malcolm was a conniving force, seeking power and influence. His decision to speak out on his former mentor Elijah Mohamed's infidelity, seen by his devotees as an example of Malcolm's latent feminism, is also presented as an act of political expediency that had nothing to do with moral principle. In this way, the series dazzles with its wide-ranging perspectives, even when the voices make one squirm.

The show has received pockets of criticism, too, particularly the fact that most historians or characters interviewed for the series are overwhelmingly male. Responding to the criticism, Dretzin says that while they regretted that they hadn't secured more female voices, he sought to clarify that there was "a dearth of women who had played a central role in the story we were telling".

"We did struggle to find female voices. Some of the people we would have wanted to talk to had either passed away or were unwilling to talk to us," Dretzin told MEE.

The relentless focus on Bradley is an exercise of dogged investigative journalism by Abdur-Rahman Muhammad, whose everyday demeanour resonates as the ordinary man's pursuit of truth and justice for Malcolm. He is presented as a one-man force for truth.

But should the series have focused more on the part played by law enforcement, rather than the role of one shooter?

"I feel we give ample attention to the puppet masters; however, the degree to which that is a heavily redacted story, we could only tell so much," Bertelson says.

"So much of the FBI's role is not known and sits among thousands of unreleased files to date. I'm confident we told more of that story than any previous documentary." Film
Who was Ashraf Marwan? A Netflix film fails to tell us 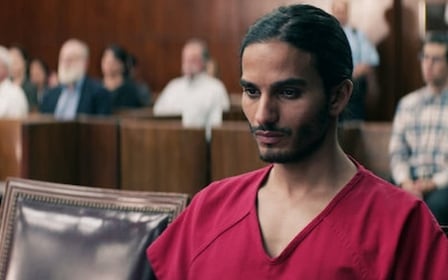