Who reached America first – Columbus or the Phoenicians?

A replica Phoenician vessel made in Syria is sailing the Atlantic to prove the ancient civilisation did it 2,000 years before Columbus 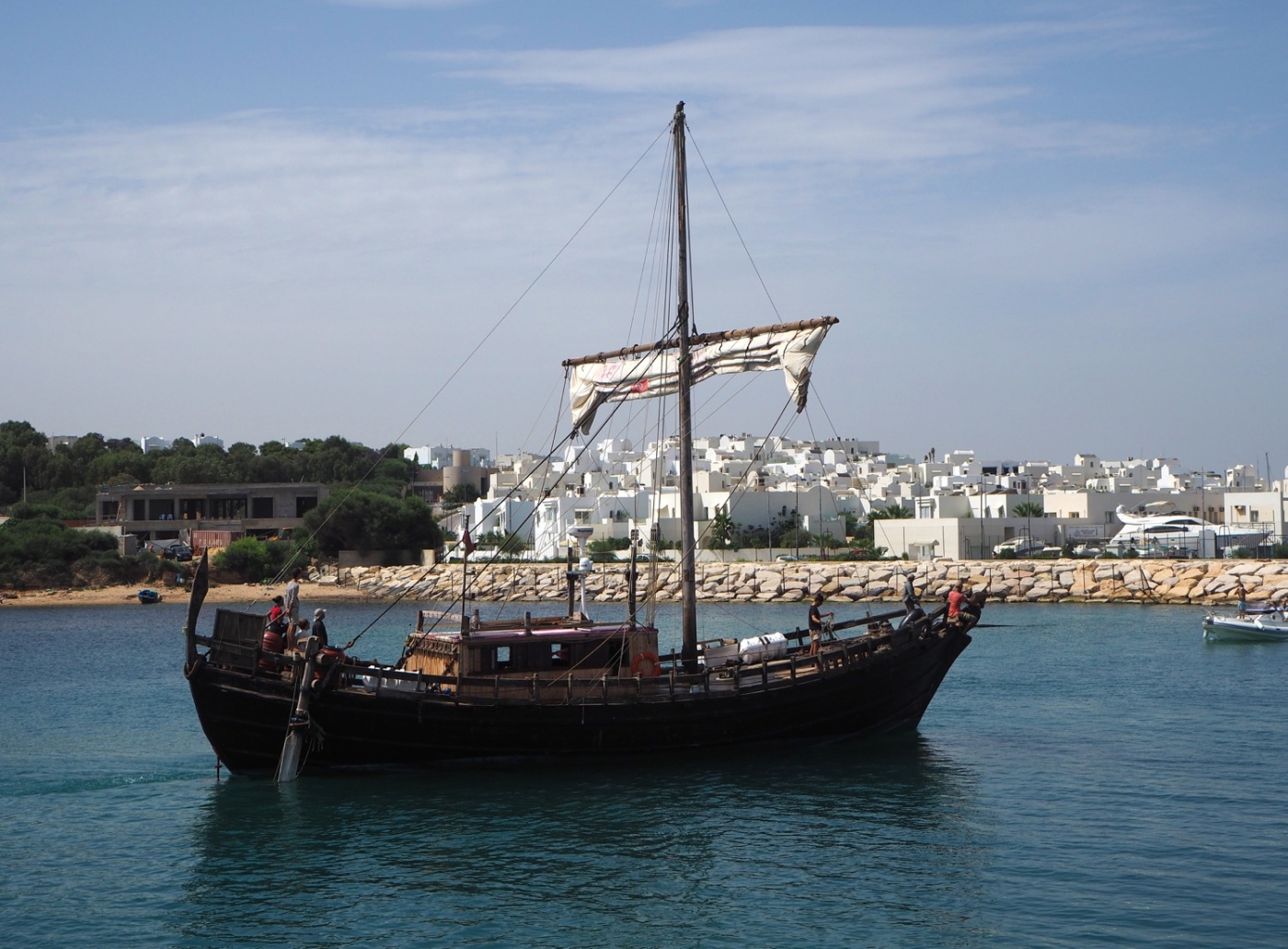 The Phoenicia enters Gammarth Marnia near Tunis, ahead of its voyage across the Atlantic (MEE/Tom Westcott)
By
Tom Westcott
in
Tunis, Tunisia

Amid late afternoon sun over the Tunisian coast, The Phoenicia, an elegant wooden replica of a ship made more than 2,000 years ago, unfurled its purple and white striped sail and headed for Gibraltar.

Saturday's launch, which took place just 10km from the ancient Phoenician port of Carthage, marks the start of the Phoenicians Before Columbus Expedition, years in the planning and now headed for the Americas.

The expedition hopes to arrive in December, depending on the weather, with stops - after Gibraltar - in Cadiz, Essaouira and Tenerife.

Philip Beale, the project’s leader, explained: “This expedition hopes to show that the Phoenicians could have been the first ancient seafarers to cross the Atlantic, well before Christopher Columbus.

“It’s not whether Christopher Columbus was the first to cross the Atlantic but actually that he was probably one of the last.”

As for their likely destination, Beale said that the idea is to not aim for anywhere in particular. Instead they will go where the winds and currents naturally take them, to best recreate the likely route of the Phoenicians.

The rulers of ancient waves

The Phoenician civilisation was one of the most influential in the Mediterranean, founding trading posts across the region and beyond.

Originating in the Levant, it spread through the Mediterranean between 1500BC and 300BC and stretched, at its high point, from northern Israel and southern Syria to ancient Carthage (Tunisia) and Cadiz, Spain.

Of its independently-functioning and primarily coastal city-states, Tyre, Byblos and Sidon (in modern Lebanon) were among the greatest. Feared and hated by the Romans, the Phoenicians were less an empire of land, more a ruler of the waters, whose seafaring skills and capacity for sea-travel led them to instigate global trade.

“The Phoenicians made very strong ships,” said Beale, who left the British navy to work as a banker in the City of London before becoming an adventurer and writer, “and were the first to use iron nails in shipbuilding, which enabled them to dominate sea-trade. And they were successful through trading and good relations, not through colonisation or militarisation.”

Describing Columbus - who landed in the Americas in 1492 - as a “war criminal”, Beale said historical sources point to the Vikings (under Leif Erikson) having arrived in North America around 1000AD, followed, a few centuries later, by mediaeval Basque fishermen. Legends say Irish monk St Brendan also made the voyage in a leather boat; and that 14th-century emperor of Mali Abubakari II abdicated to set sail across the Atlantic in 1311.

But the Phoenicians, Beale believes, were the first.

“The Phoenicians assembled one of the biggest fleets and almost certainly sailed to America. There doesn’t appear to be any record of ships returning but there are stories of African cultures being found in the jungles of Brazil so maybe they landed on the shores but couldn’t get back,” he said.

The Phoenicia was built on Syria’s island of Arwad by six shipbuilders who, working almost exclusively in wood, still use traditional boat-building methods.

Arwad was settled by Phoenicians in the early second millennium BC. Huge stones - the remains of the original Phoenician sea-wall - still line its shores. Throughout the island’s history, locals say, its inhabitants have never stopped building boats.

Asma al-Assad, wife of the president, visited the ship twice, both while it was under construction and at its inaugural sailing in 2008, where three Syrians were among its first crew.

The 20-metre, 50-ton vessel built by Arwad’s shipwrights, led by Khalid Mohamad Hamoud, took more than nine months to construct. It is based on Beale’s designs, in turn inspired by the remains of Jules Verne 7, a 2,000 year-old Phoenician vessel found by archaeologists in Marseilles. Its construction used 40 cubic metres of five different types of regionally-sourced timber.

“The [16-metre] mast was made from Syria’s biggest tree, at least that’s what they said. It was certainly the biggest they could find,” said Beale.

The end result, he said, is the closest you can get to a reasonably accurate replica of a Phoenician vessel. Beale captained its maiden voyage - a two-year circumnavigation of Africa between 2008 and 2010 - proving a reference in Ancient Greek historian Herodotus’s Histories that Phoenicians claimed to have made this journey in 600 BC.

He was accompanied on that voyage by Yuri Sanada, a Brazilian sailor, diver, writer and The Phoenicia’s on-board documentary film-maker.

“It was fascinating to prove that that voyage was possible in a replica Phoenician ship and change our understanding of history,” Sanada said. “People think history is already written but this is not true, and to help rewrite history is very humbling.

"We think we are smarter than older civilisations so it’s hard for people to accept that the Phoenicians could have crossed the Atlantic Ocean.”

The crossing of the Atlantic is close to Sanada's heart. In 2000, he published his book Solomon’s Gold - a bestseller in Brazil – which posits that Biblical mentions of the land of Ophir, from where gold was brought, was actually modern-day Brazil and that the traders were Phoenicians.

Sanada himself had been planning to make a replica Phoenician ship to sail from Lebanon to Brazil, a project which was to be funded by the Israeli and Lebanese governments. But then 9/11 happened, and each government refused to be involved unless the other pulled out. The venture collapsed.

'When you’re at sea, you never know what will happen'

“I knew someone else would do this project and later I found Philip,” said Sanada. “I thought it was far too dangerous to sail an experimental ship around Africa but I went anyway. And it was very dangerous, but it was an adventure.”

Sanada anticipates the voyage to the American continent will be a little less dangerous but admits: “When you’re at sea, you never know what will happen.”

Beale said the expedition will be facing "big and powerful” 10-15 metre-high waves, which are a normal for the Atlantic swell.

“In storms, these are very dangerous but the ship should hopefully be able to handle it, although she’s 11 years old now, and not as strong as she once was.”

Wanted: crew for an ancient vessel

The Phoenicia’s diverse crew, which usually numbers around 12, has almost always included at least one sailor of Middle Eastern heritage. One of Beale’s aims is to offer young people from the region the opportunity to participate.

“One of the exciting things about this expedition is the international diversity of the crew, who are from many different countries, cultures and religious backgrounds,” he said. “We’re a bit like the UN.”

Lebanese crew member Sheimaa Oubari has been working on the Phoenicians Before Columbus expedition during the last four years, first while working for the Lebanese NGO Save Tyre Foundation and later as an independent volunteer, before she helped sail Phoenicia from Europe to Tunisia.

“I went to a French school so I didn’t know about Phoenician history and it has been amazing to find out about the discoveries and achievements that Phoenicians made before Christ,” she told MEE.

“Since I started working on this project, I only had one wish - to be part of the crew - and finally I succeeded. I had never sailed before and it was the most difficult and most amazing thing I’ve ever done. This ship changes everyone who steps onto it.”

A handful of the current crew will be sailing all the way to America but many join for one leg of the voyage, for a few weeks or a month, braving sparse living conditions - including an outside toilet overhanging the side of the ship, which Oubari described as “the worst toilet with the best view” - and often inclement weather at sea.

Past crew have included the three Syrians who pleaded to leave the vessel at the next port after suffering severe seasickness.

Then there were the five Omani naval sailors seconded to the vessel in 2009, who mistakenly believed that they would be spending two weeks on a cruise ship and an additional fortnight on a paid holiday in Zanzibar (formerly under control of Oman).

But the unexpected hardships at sea on a wooden sailing vessel, as well as the impossibility of landing in Zanzibar due to Somali pirate activity and related food and water shortages, almost led to a mutiny.

For the small marina of Gammarth, lying 20km outside Tunis and populated mainly with luxury yachts and speedboats, the arrival of such an eminent vessel was an exciting moment.

As the crew took up Phoenicia’s billowing 90 square-metre sail, harbour master Anis Zarmouk sped out to greet the vessel and guide it safely into port. “We are delighted to receive the Phoenicia here, and it’s great that they chose to start the expedition from Tunisia, which was ancient Carthage,” he told MEE. “It’s great for Tunisia, and great for the marina.”

The vessel’s presence in Tunisia during the last week has attracted a stream of curious locals, especially after appearances on Tunisian TV and radio, but the expedition has also sparked interest from historians, scholars, sailors and enthusiasts across the globe.

Writer and film-maker Lindsay McCauley travelled to Tunisia from Australia. While researching a book about Mayan architecture, he has drawn parallels between measurement systems used by the Mayans, the ancient Israelites and ancient Egyptians. “I can think of no other way for that measurement system to reach Mexico other than via a Phoenician ship, so this expedition is a crucial part of my research.”

Didon of Carthage, a Tunisian NGO, which promotes Phoenician culture, and Tunisia’s Merchant Navy Association arranged cultural tours for the crew to some of the country’s important Phoenician sites. It also donated provisions, including a large quantity of tinned harissa, and arranged for high-level Tunisian officials to come on board.

Hichem Bin Ahmed, Tunisia’s transport minister, told MEE that the expedition choosing Tunisia for its launch was an important boost for the country’s tourism sector, which is still floundering after major terror attacks against foreign tourists left dozens dead in 2015.

“What happened four years ago could have happened in any country and we are already receiving twice as many tourists as two years ago,” he said from Phoenicia’s deck. "We are also encouraging cruise ships and small boats to visit Tunisia and explore our historical monuments.”

And tourism minister Rene Trabelsi described the Phoenicia and her crew as an “undeniable asset to Tunisian tourism”.

Depending on the dangerous Atlantic winds, the expedition hopes to reach the other side of the ocean in December.

The success of the expedition depends largely on how well the vessel can weather those wild winds – but the crew are ready.

Oubari gazed out to sea.

“I truly believe in this project, as the Phoenicians were the greatest seafarers in history,” she said.

“They were always pushing boundaries and sailing all over, so how could they have not crossed the Atlantic. And I hope this expedition will clarify this question.” Culture
'We are people of the sea': Syria's last wooden-boat builders 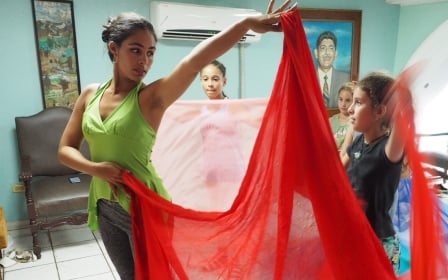