Despite hardships, Iraqi Christians hold on to Christmas traditions

“Christmas is…about helping people, it’s about sharing our thoughts – our prayers – with others. This is the real Christmas" 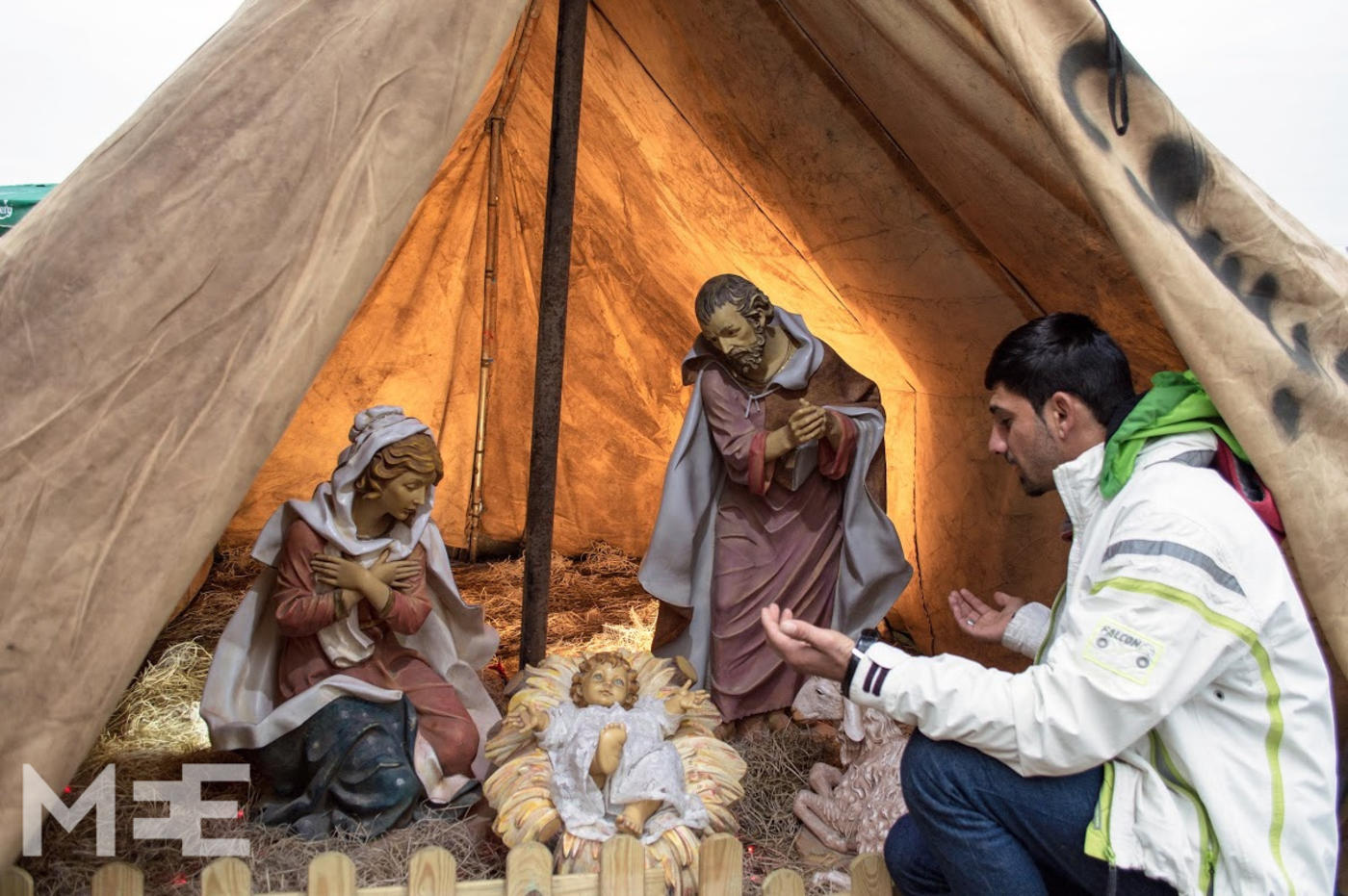 Ainkawa, IRAQ – Nwar Jardes Ena, kneels down on the muddied ground in front of the replicated nativity scene, reciting a prayer for the good health of his family and friends over the Christmas period – a yearly tradition for the young Iraqi Christian. This year, however, is different. Rather than carry out his ritual in the warm and sheltered confines of his local church, Ena is braving the wind and rain in an internally displaced persons (IDP) camp in Ainkawa. The nativity scene he crouches beside has been put together delicately, sheltered in a ragged and dirt-smeared IDP tent.

Ena fled his hometown of Qaraqosh early last August, after Islamic State militants advanced on his town and a handful of other Christian cities and villages in the area. After the advance, the Christian Iraqi city of Ainkawa in the Kurdish Autonomous Region was inundated with internally displaced Christians, desperately seeking refuge in Ainkawa’s many churches and community centres.

Ena and his family are among those who have been living outside Mar Elia Church in tarp tents ever since. This year he and his family will celebrate their first Christmas away from the comforts of home.

“When I remember I’m Christian I smile,” he told Middle East Eye. “But this Christmas will be the worst and most difficult in all of my life,” he said, with a sudden tone of sadness in his voice that almost seems misplaced on the young man who despite his circumstances appears to carry a smile and a laugh with every sentence.

Ena describes Christmas last year in Qaraqosh with a sweeping nostalgia – as though talking about an event that happened decades ago passed down in memory from every generation to the next.

“To be honest, the day I return to Qaraqosh will be my Christmas,” Edna said sombrely.

As a religious minority in Iraq, Christians have often faced persecution for their religious beliefs. The Islamic State’s latest campaign against anyone – Muslim or Christian – who does not agree with their draconian and extreme interpretation of Islam, is the most recent threat facing Iraq’s estimated 400,000 remaining Christians.

More than two-thirds of the Christian population in Iraq fled the country after the American invasion in 2003. From the start of 2014 many of those who stayed have had to flee their homes only to become refugees and IDPs as Islamic State advances gained momentum in Christian regions.

However, Father Daniel al-Khoury, of Mar Elia church – the church that is currently hosting Ena’s family as well as many other of the displaced – told MEE that although 2014 has been a destructive and devastating year for Iraq’s Christian population, the problems faced while celebrating Christmas traditions in Iraq is not limited solely to the advances and sieges made by the Islamic State in the country.

“To be Christian is like a curse, which is following the Christians here,” Father al-Khoury said, when describing the situation for Christians in Iraq. “Make no mistake, we can express our thoughts and our faith, we are allowed to according to the laws of Iraq. But really it depends on the community. The community of Baghdad is so mixed – some people are offended if we celebrate Christmas among them.”

Father al-Khoury speaks with experience. He fled Baghdad to Ainkawa in 2006 after receiving serious death threats by a local al-Qaeda cell in the city. He says that within the Kurdish Autonomous Region of Iraq, there is a level of freedom to practice Christmas traditions that is not available elsewhere – but outside of the region it is hard to know how people will react.

Al-Khoury says Iraq used to be more open and welcoming to Christians and their holidays, particularly Christmas, but the start of the United States invasion in 2003, changed all that.

“Where I grew up, my Muslim neighbours used to put up Christmas trees with us, and the nativity scene, it was something very normal for all the families who lived around us. Before 2003, being stopped from celebrating Christmas traditions, or having problems, was very rare. After America invaded Iraq everything changed though, even for Muslims, suddenly people were being separated”, as sectarianism began to take hold.

For the Christian families in Ainkawa’s IDP camps, that separation seems to feel intense. Yet, although forced from their homes and in refuge, a defiant spirit remains. People are determined that over the days running up to Christmas, they will celebrate their traditions.

Beside the nativity scene at the camp, a small Christmas tree sits, decorated in baubles and under the constant watchful eyes of young children whom, despite the upheaval, still light up at the Christmas decorations in place.

The Christmas spirit will not die out Ena told MEE as he got up from the nativity scene – and displaced Christians in Iraq will still celebrate Christmas.

“We will all try and be happy, meet friends, eat together, and celebrate Christmas here,” Ena said. “We will make a party here for the children as well, a small party that will make a little happiness – because this celebration is their celebration the most.”

Less than a mile away, in the buildings of the Chaldean National Congress (CNC) – a small complex set up by the Chaldean Iraqi Christian political party – plans have been put in place to sort out Christmas gifts of clothing for children 14 years and younger who have been displaced, including at Ena’s IDP camp.

Sameer Azzo Dawood the general secretary of the CNC, exudes enthusiasm at the mention of Christmas. It's a day he waits for all year he says. Dawood is proud to be Iraqi and Christian, but he laments how celebrating his religious traditions are hard in the country – even before the advance of the Islamic State.

“In Iraq, all the Christians are waiting for [Christmas],” Dawood said, his hand movements rapid and lively. “The people have fun together, sitting making a party in their homes. Everyone goes out to meet each other, but now what has happened in Mosul [under Islamic State control] and the sectarianism in Baghdad has changed everything. We can’t go out and celebrate in the street anymore. People just have to stay indoors, if they don’t do this it could be dangerous for them. It is in our culture to have Father Noel, give each other gifts, visit each other.”

While the Christians in Ainkawa are fortunate to be able to celebrate openly and freely in their city, both Dawood and al-Khoury stress that many Christians in Iraq no longer have that option.

A self-proclaimed optimist, al-Khoury said he believes his people have a great lesson to learn from the hardships facing their community. This year has been a disastrous one for Christians in Iraq, he says, but it hasn’t broken the minority’s spirit – if anything, it has just made Iraqi Christians more resolute in the practice and celebration of their faith.

“Christmas has started to lose its meaning – but this crisis has allowed us to rediscover the real meaning of Christmas,” al-Khoury told MEE. “Christmas is not about wearing new clothes, or putting the Christmas tree up, or even having good food, it is about helping people, it’s about sharing our thoughts – our prayers – with others. This is the real Christmas, helping the people that need help. This is Christmas.” 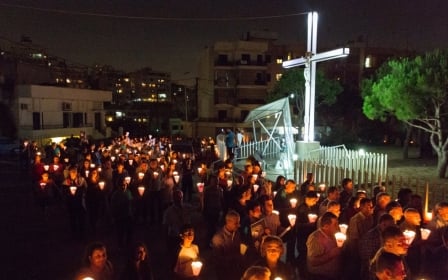