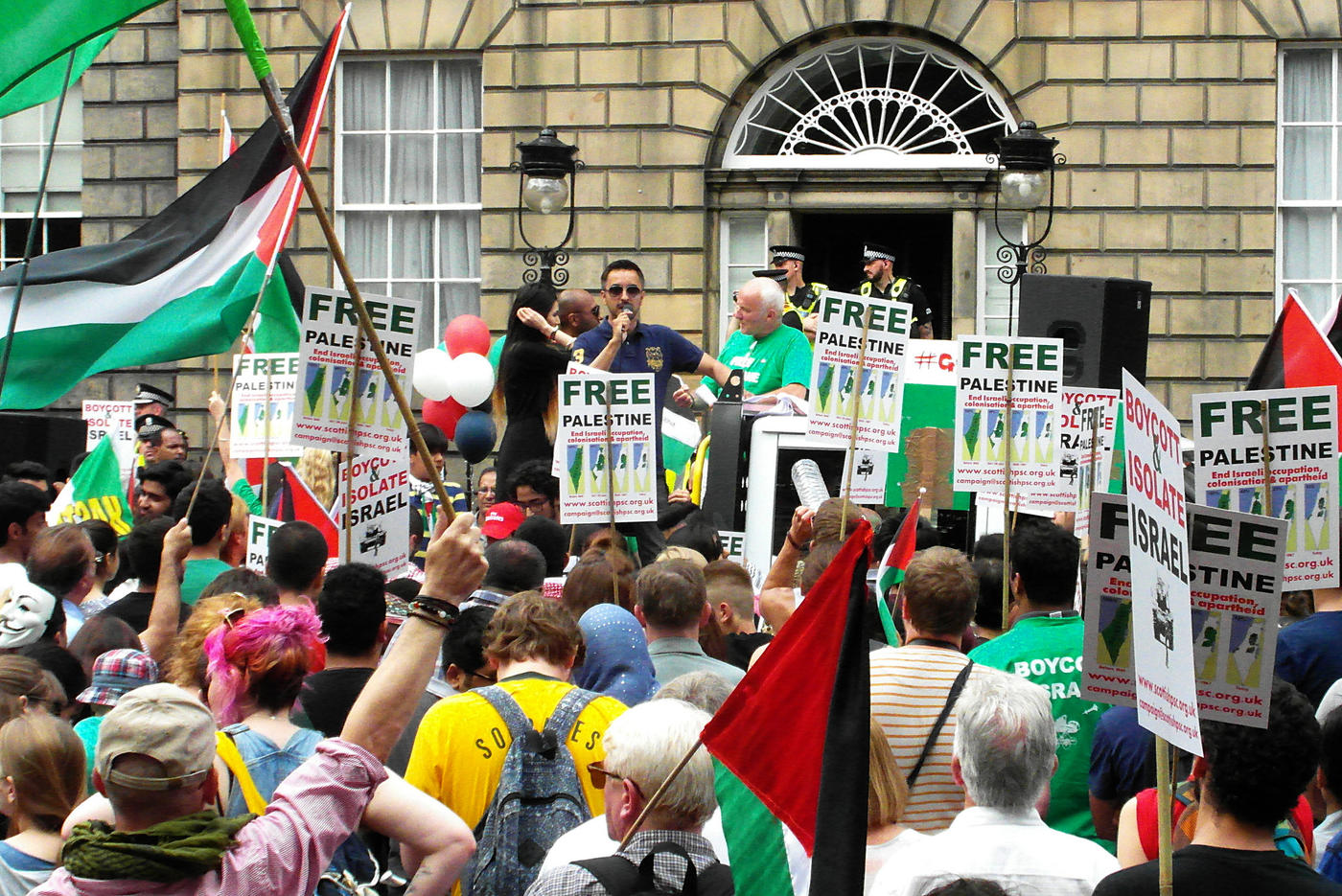 EDINBURGH, Scotland - In August 2014, Operation Protective Edge was underway in Gaza, a conflict in which 2,205 Palestinians and 71 Israelis were killed, according to UN estimates. At the same time, the world’s largest arts festival was taking place in Edinburgh, and a campaign was underway to see a cultural boycott of all performances with ties to the Israeli government.

Scotland’s capital city is home to the Edinburgh International Festival and the Edinburgh Festival Fringe, which take place annually throughout the month of August.

In the run up to the 2014 festival, 50 Scottish artists, academics and campaign groups including Scotland's Makar  (national poet) Liz Lochead and writer Alasdair Gray, signed an open letter calling for the cancellation of The City, a show by the Incubator Theatre which, the letter claimed, received funding from the State of Israel’s Ministry of Culture.

“We support the call from Palestinian civil society for a targeted campaign of boycott, divestment and sanctions (BDS), including of Israeli state-funded academic and cultural institutions. We strongly believe that there can be no 'normality' in international relations with Israel while it continues to oppress the Palestinian people,” the letter read.

“Some brave and principled Israeli artists oppose the Israeli state's cynical attempts to use them for propaganda purposes. In taking Israeli state funding, Incubator Theatre is not among them,” the letter continued.

The venue hosting The City later cancelled the show. Pola, a dance troupe from Ben-Gurion University of the Negev, a state-funded institution, also cancelled their performances at the festival.

But the issue did not end there. The campaign for a cultural boycott of the Israeli state will continue at the festival in 2016, though it is yet unclear if any Israeli state-funded artists will appear at the festival this year. The Palestinian Campaign for the Academic & Cultural Boycott of Israel (PACBI) published an open letter on 8 March urging the festivals “to reject funding from, and cooperation with, the Israeli government and its complicit institutions” during this year's festival.

The cultural boycott of Israel

The BDS campaign began in 2005 and is organised by the Palestinian BDS National Committee (BNC). According to the BDS’s website, the campaign is a global movement which “allows people of conscience to play an effective role in the Palestinian struggle for justice”.

PACBI, one division of the BNC, has called for a cultural boycott of the Israeli state at the Edinburgh festival in 2016 on the grounds that Israel is simultaneously suppressing Palestinian culture while using its own culture to mask a “regime of occupation, settler-colonialism and apartheid”.

In Gaza, “children born in 2005 and 2006 who are now 10 years old have experienced four wars,” Dr Issam Hijjawi, the chair of the Association of Palestinian Communities in Scotland tells Middle East Eye.

The boycott in 2014 was not in direct response to what was happening in Gaza, Hijjawi says, yet the conflict did highlight the fact that Israel is using its own culture to “bury under the carpet the ugly face of the occupation”.

As the BDS campaign has gathered steam in Scotland, a group of well-known artists and writers, including Scotland-based Harry Potter author JK Rowling, opposed the boycott movement in a letter to the Guardian, stating: "Cultural boycotts singling out Israel are divisive and discriminatory, and will not further peace."

Ben Harrison, co-artistic director of Edinburgh-based theatre company Grid Iron takes a different stance on the issue. Harrison signed the open letter calling for the cancellation of The City in 2014, and in a statement sent to MEE, Harrison said his “position remains unchanged since 2014, as the position of the Israeli government has remained unchanged.

“Until such time as the political status quo in Palestine radically shifts, I believe the stance of European artists towards the Israeli state should be the same as that adopted towards the South African apartheid regime in the 1970s and 1980s.”

According to Harrison, “Artists and cultural institutions are more visible and more powerful than is sometimes thought. Silence and non-action is a tacit approval of the status quo. We cannot allow the arts and free cultural exchange to be the means by which a regime acting in violation of international law seeks to legitimise itself.”

For Dr Issam Hijjawi, BDS is a “just and civilised action” and an effective way to “put pressure on Israel to comply with international law,” specifically to end the occupation, to ensure equality for Palestinian citizens of Israel, and to grant the right of return to Palestinian refugees.

As a BDS advocate, Hijjawi did not expect the movement to be so successful. “Israel has started to feel the heat of the movement,” he says.

Cultural boycotts and freedom of expression

Many have been critical of the campaign for a cultural boycott of Israel at the Edinburgh Festival and of wider cultural boycotts against Israel in Scotland. In a statement sent to MEE, the Edinburgh Festival Fringe Society stated: “Our commitment to freedom of expression means that we support the right of all participants of the Fringe and members of the public to hold and express differing political views and that the curtailment of this freedom of expression is contrary to the fundamental ethos of the festival."

Director of Jerusalem-based Incubator Theatre Arik Eshet, whose show The City was cancelled in 2014, tells MEE the show is not political: “It’s not propaganda art.” According to Eshet, in its early days Incubator Theatre was a satirist company, and some of their performances have been critical of government policies. Eshet labels boycott campaigns “unliberal and undemocratic” and says they target civilians and “make the arena more aggressive and less talkative”. According to Eshet, “it blocks ways for a dialogue,” and in the “very complex" environment in Israel and Palestine, “only dialogue will settle this situation”.

The issue of the cultural boycott of Israel has also been brought to the Scottish Parliament. On 25 February, MSP and Deputy Leader of the Scottish Conservatives, Jackson Carlaw, discussed the issue of how “Israel needs cultural bridges, not boycotts”.

In his address to parliament, Carlaw expressed concern that the Scottish Parliament “has tabled some 371 motions on foreign countries, 62 of which concern Israel and 36 of which have been strongly condemnatory”.

Carlaw went on to quote Matan Ben Cnaan, an Israeli artist who won the BP Portrait Award in 2015 and later had his work displayed in the Scottish National Portrait Gallery in Edinburgh: “As I see it, the majority affected by the boycott are individuals, artists, scholars, scientists, most of them are private people who don’t represent any official authority, but do represent a variety of thoughts and political views.”

In a statement sent to MEE, originally issued on 31 July, 2014, a Scottish government spokesperson was quoted as saying: “The Scottish Government does not tell individual venues or galleries what they can or cannot programme and do not themselves advocate or support cultural boycotts."

According to Hijjawi, one example is Mahmoud Darwish, whom he describes as “the equivalent for us as Palestinians to [Robert] Burns in Scotland”. Hijjawi says that Darwish was a poet and not an advocate of armed struggle, yet he was imprisoned four times in Israel before being forced to flee in the 1970s.

Claiming that BDS activists are limiting freedom of speech is just a way “to silence us from speaking about what is happening in Palestine,” Hijjawi says.

“In general I’m a supporter of BDS,” Sheppard tells MEE, adding that there is a lot of support for Palestine within the SNP, Scotland’s largest political party.

In terms of cultural boycotts of the State of Israel, Sheppard is supportive of this route of BDS, though he emphasises that there is a difference between Israeli artists coming to Scotland independently, and those receiving direct funding from the Israeli government. “It’s not because of the passport somebody carries that they’re not welcome,” Sheppard tells MEE.

'We are not targeting individuals'

Hijjawi expresses similar sentiments, explaining, “in the cultural and academic boycott we are very clear that we are not targeting individuals,” adding that in 2014 four Israeli shows came to the Edinburgh festival: two came independently and performed unchallenged, but two received partial funding from the Israeli state and were targeted by campaign groups.

Sheppard has visited Palestine twice, and says his visits have “reinforced” his stance on the issue. Sheppard wrote about his most recent visit to Palestine in a blog post on 22 February, in which he gave a detailed account of the current situation in Palestine along with his own observations.

Hijjawi believes there is a lot of support for Palestine in both Scotland and Ireland, which he traces to the two countries sharing “the plight the British empire inflicted in our history”. The division of Ireland and the Highland clearances in Scotland resonate with Palestinians, Hijjawi explains.

“We [Palestinians] feel at home here in Scotland… we are very grateful for the level of support we are receiving from the Scottish public,” Hijjawi says.

For Hijjawi, BDS is an important means to make Israel aware that the international community is not going to keep silent while Israel violates international law. While the UK's Conservative government, along with many others, is trying to shut down the BDS movement, Hijawi and the APCS are not deterred: “We do believe that despite all these efforts, you can’t tell individuals not to adopt a BDS policy,” Hijjawi says, “you can’t control the public.”