Israeli President Reuven Rivlin and Mayor of London, MP Boris Johnson, play football with youths as they launch the new football season of the 'Equalizer' organisation in Jerusalem (AFP)
By
Alex MacDonald

Mayor of London Boris Johnson has been disinvited from an event in the West Bank following derogatory comments made about the Boycott, Divestment and Sanctions movement (BDS).

The mayor had been planning to speak at an event hosted by the Sharek Youth Forum, an organisation launched by the UN Development Programme, during his trade visit to Israel.

However, on Wednesday the group rescinded his invitation, just hours before his arrival.

"As Palestinians and supporters of BDS, we cannot in good conscience host Johnson, a person who denounces the international BDS movement and prioritises the feelings of wearers of ‘corduroy jackets’ over an entire nation under occupation,” a spokesperson for the group told the Independent.

"In Johnson’s own words, the 'only democracy in the region… a pluralist, open society' is one that oppresses citizens, confiscates land, demolishes homes, detains children, and violates international humanitarian and human rights law on a daily basis. We, at Sharek Youth Forum, refuse to give a platform to someone who fails to acknowledge our very existence as Palestinians."

Johnson was set to visit the organisation as part of a three-day trip around Israel and the Palestinian territories.

The controversial comments about BDS were made on Monday during a press conference in Tel Aviv as part of an official visit to the country by the mayor.

“I cannot think of anything more foolish than to say that you want to have any kind of divestments or sanctions or boycott against a country that, when all is said and done, is the only democracy in the region, is the only place that has, in my view, pluralist, open society – why boycott Israel?” he said in response to a question about BDS.

“I think there’s some misunderstanding over here about it. The supporters of this so-called boycott are really just a bunch of corduroy-jacketed…lefty academics who have no real standing in the matter and I think are highly unlikely to be influential in Britain.”

Johnson's three-day trip to Israel-Palestine was intended to strengthen economic ties between London and the region, meeting with senior Israeli and Palestinian business leaders.

Some speculated that he intended to improve his image on the international stage, amid rumours of plans to pursue an ambition to succeed David Cameron as prime minister in the UK.

During his trip he was set to visit the first female Palestinian governor, Leila Ghannam - however, she then cancelled the meeting citing "personal reasons".

Johnson has become known for eccentricity and foppish behaviour since rising to fame as a host of British satirical game show Have I Got News for You.

Johnson went on to praise Churchill’s role in the creation of the modern Middle East, even suggesting he had coined the term itself.

“He drew the boundaries of Syria, he put the three vilayets of Baghdad and Mosul and Basra together to create modern Iraq,” he said.

“He put the Hashemites on the throne of Jordan, where they still are, and he was absolutely indispensable to the foundation of modern Israel.”

A video of Johnson experiencing an Israeli virtual reality simulator on Monday went viral after it appeared to show the mayor barking like a dog: 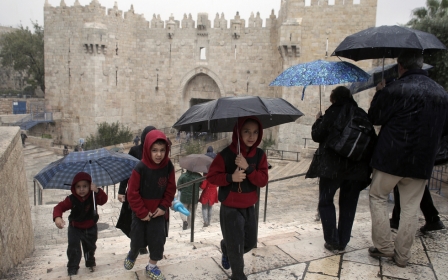