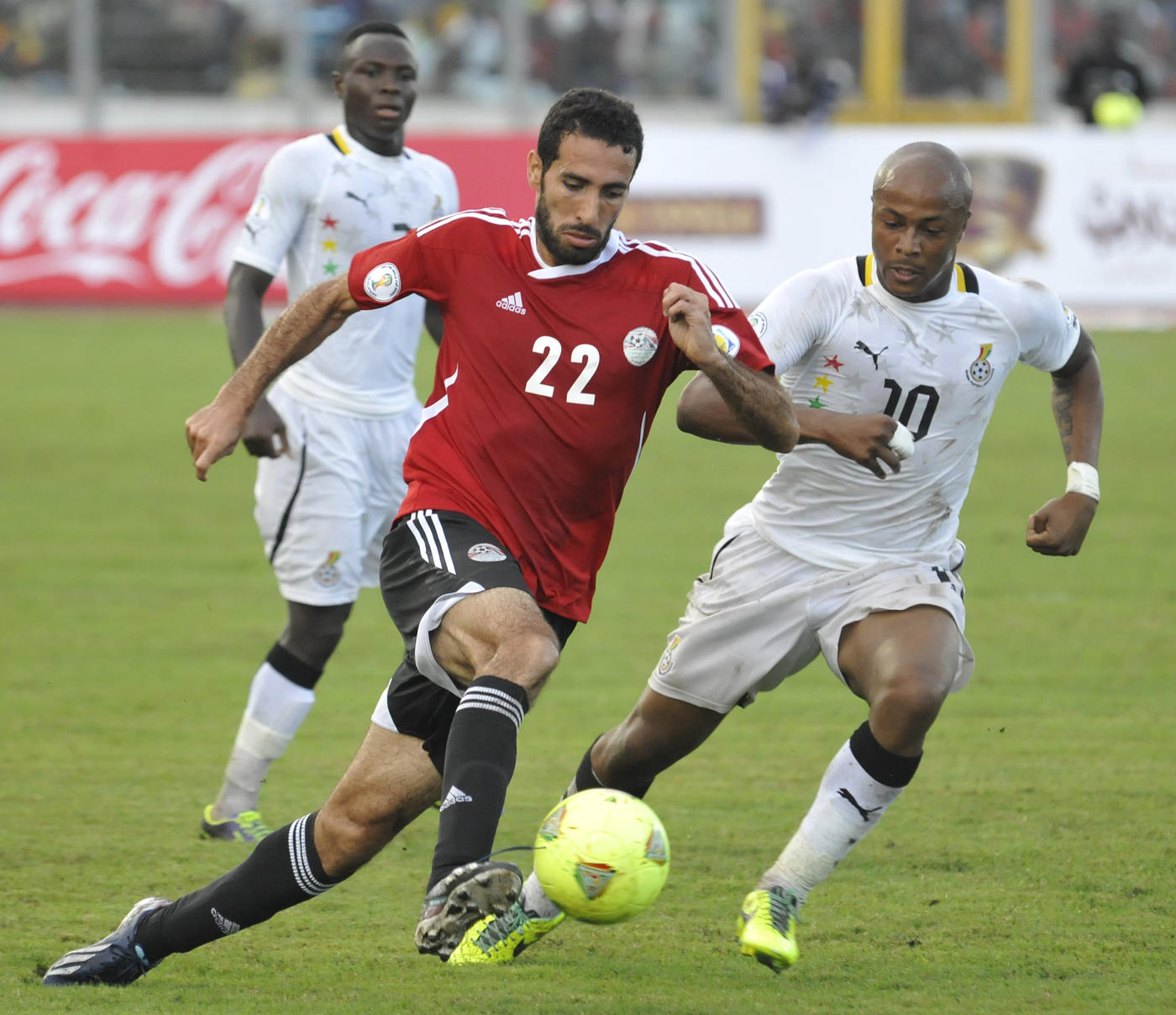 When Mohamed Aboutrika walked off the pitch after his final game for Cairo club Al Ahly in their victorious 2013 African Champions League final, he was mobbed by players, fans, and even police officers. Everyone wanted to touch the midfield genius, who had a penchant for scoring crucial late goals.

As Al Ahly’s talismanic playmaker, Aboutrika won seven league titles and five African Champions League cups. He was named African player of the year four times and won over 100 caps for the Egyptian national team, twice driving them to victory in the African Cup of Nations.

It’s difficult to overstate how popular Aboutrika is in football-crazed Egypt; the hugely successful former playmaker is a national hero. “His popularity is much bigger than the president’s,” says Hatem Maher, a senior editor at Ahram Online. “He’s not only the most popular sporting figure - he’s the most popular figure.”

Yet Aboutrika is also widely regarded as an Islamist, and the Egyptian authorities are in the midst of an ongoing crackdown on dissent. Earlier this month the state seized Aboutrika’s assets in a travel company that he part-owns, which the government alleges is being used to fund violence by the Muslim Brotherhood.

Investigations are underway and Aboutrika may face prosecution. Aboutrika is not the first footballer to fall foul of the authorities, but his targeting may hold more significance in Egypt’s evolving political climate and the case may test the limits of the crackdown, with some people saying that targeting Aboutrika is a “red line” that the government would be wise not to cross.

‘He made the whole nation happy’

Aboutrika, now 36, is an almost unique figure in Egyptian society - one who transcends stark political and sporting divides. “He has the ability to rise about the fault line,” says Yasser Thabet, the author of several books on Egyptian football.

Aboutrika is so popular that he often transcends the bitter divide between Al Ahly and their Cairene arch-rivals Zamalek. “I know a lot of Zamalek fans who love him,” says Mostafa - a former member of the hardcore Zamalek fan group Ultras White Knights. “[He is] one of the most popular guys in Egypt in decades.”

“He was the backbone of the national team” says Mostafa, a begrudging admirer of Aboutrika. “He made the whole nation happy, so we will never forget him.”

Aboutrika also gained respect among many Egyptians for his perceived humility, piety and outspoken support for humanitarian causes, including Gaza. After scoring against Sudan in the 2008 African Nations Cup final, he lifted up his shirt to reveal a T-shirt with the message “Sympathise with Gaza”, earning a reprimand from the tournament’s organisers.

He is adored by Al Ahly’s hardcore fan group Ultras Ahlawy, who played a key role in the demonstrations that toppled the autocratic president Hosni Mubarak.

Aboutrika has publicly supported the Ultras, particularly in the wake of the 2012 Port Said disaster - a politically freighted mass brawl in which at least 72 Al Ahly fans were killed. Aboutrika held one of the dying supporters in his arms that night.

However, Aboutrika’s political stances have also stirred controversy. Unlike many players Aboutrika did not publicly back Mubarak during the 2011 uprising, and he publicly refused to shake the hand of Egypt’s subsequent military leader Mohamed Hussein Tantawi in the wake of Port Said disaster. Aboutrika endorsed the Islamist, Muslim Brotherhood-affiliated Mohamed Morsi in the 2012 presidential elections.

Thousands have been jailed and hundreds killed in protests during a crackdown on the Muslim Brotherhood following the military’s ousting of Morsi in July 2013. Aboutrika spoke out against the coup - although he has since scaled back his outspokenness after he was criticised for mixing sport and politics. On Saturday an Egyptian court sentenced Morsi and more than 100 others to death for their role in a 2011 jailbreak.

Aboutrika is a rare breed in Egypt: a famous Islamist who most anti-Islamists don’t hate, a symbol of unity. But his political stances have made him enemies in the country’s partisan, pro-military media. It may be uncomfortable for many that Egypt’s most popular man is also allegedly a supporter of the Muslim Brotherhood.

Earlier this month a government committee tasked with confiscating assets of organisations that fund the Muslim Brotherhood - blacklisted as a terrorist group in December 2013 - seized Aboutrika’s shares in Asshab Tours, a travel company that he helped form in 2012. The company is accused of funding violence by the Brotherhood and its director was arrested on charges of participating in hostile acts towards the state. Asshab Tours declined to comment to Middle East Eye, instead referring to statements on the company’s Facebook page which deny the allegations.

In response to the moves, Aboutrika posted a defiant message online, saying: “Confiscate the money or confiscate the money’s owner, I will not leave the country, and I will continue to work for its prosperity.” He also protested his innocence in a rare interview with the state-run newspaper Al Ahram. An appeal by Aboutrika against the confiscation of his assets was rejected on 11 May.

Investigations are ongoing and Aboutrika has not yet been arrested or charged. It is not clear whether the move is aimed primarily at the company or whether the authorities have also seized an opportunity to target Aboutrika. “It might have something personal in it,” said Ahram Online’s Maher. “They might try to tarnish his image by [portraying] him as a backer of what the Brotherhood is doing.”

Thabet says that many thought Aboutrika would be able to remain outside of the crackdown on Islamists due to his profile.

He has faced criticism from a minority on social media who reacted to the seizure of his assets by arguing that Aboutrika should be subject to the law, and describing him as a Brotherhood “sheep” (although he has never directly expressed support for them).

Some believe that indicting Aboutrika is a risky move for the government due to his immense popularity. “Many of those who are pro-government are [still] hesitant to attack Aboutrika,” says Thabet.

His case has prompted an outcry. Several players, many of whom are cautious about getting involved in politics, have backed Aboutrika.

Others are sceptical of the “red line” argument. “The fact that you criticise a government for a specific act does not necessarily mean that you’ve stopped supporting that government,” points out James M. Dorsey, author of a blog and a forthcoming book about football in the Middle East. “Whether or not this is a red line that’s going to persuade people to switch their support away from [president] Al-Sisi’s government is doubtful.”

Yet Dorsey argues that Aboutrika’s case is important in the context of growing criticism of President Al-Sisi in the Egyptian media, amid limited economic progress and the recent leaking of embarrassing tape recordings which suggest that segments of the military may not be entirely happy with his presidency.

“I think [the case] is significant in that it has rallied a lot of people behind Aboutrika. That amounts to widespread criticism of an act by the government, which is significant in an environment in which [a major] segment of the power elite are becoming more critical of al-Sisi and the fact that al-Sisi has yet to deliver,” says Dorsey.

The targeting of Aboutrika suggests that the crackdown on dissent may in fact be deepening, and that the authorities are far from attempting any kind of rapprochement with the Brotherhood who, although reviled by many and severely weakened, remain one of the most significant political movements in the country.

The move also highlights the politicisation of football in Egypt, which is currently in a dire state. Football supporters have been banned from stadiums for much of the past four years, and have been widely targeted as part of the state’s crackdown. At least 19 Zamalek fans were killed in clashes with the police outside a Cairo stadium in February. Following the deaths, Aboutrika said that "Egyptian football died after the Air Defence Stadium massacre”.

On the same day that Morsi was sentenced to death another Cairo court banned the activities of all Ultras in the country, following a private lawsuit brought by Zamalek’s club president Mortada Mansour.

Other footballers have got into sticky situations for their political stance.

The Al Ahly striker Ahmed Abdel Zaher was sanctioned by his club after he celebrated a goal by displaying the four finger gesture representing support for the hundreds killed during the security forces’ violent dispersal of a pro-Morsi sit-in at Rabaa in August 2013. Zaher was shipped out on loan to a Libyan team, although – duly chastened - he was later brought back into the Al Ahly side.

Ultimately few expect the authorities to take the case against Aboutrika any further, but it remains to be seen whether his popularity can shield him.

“If it was a lesser known or a less popular player I think Aboutrika would have been through harsher times,” said Thabet. “His popularity has given him some immunity.”