Due to the Israeli siege, many families in Gaza have to send their children to work to support their families 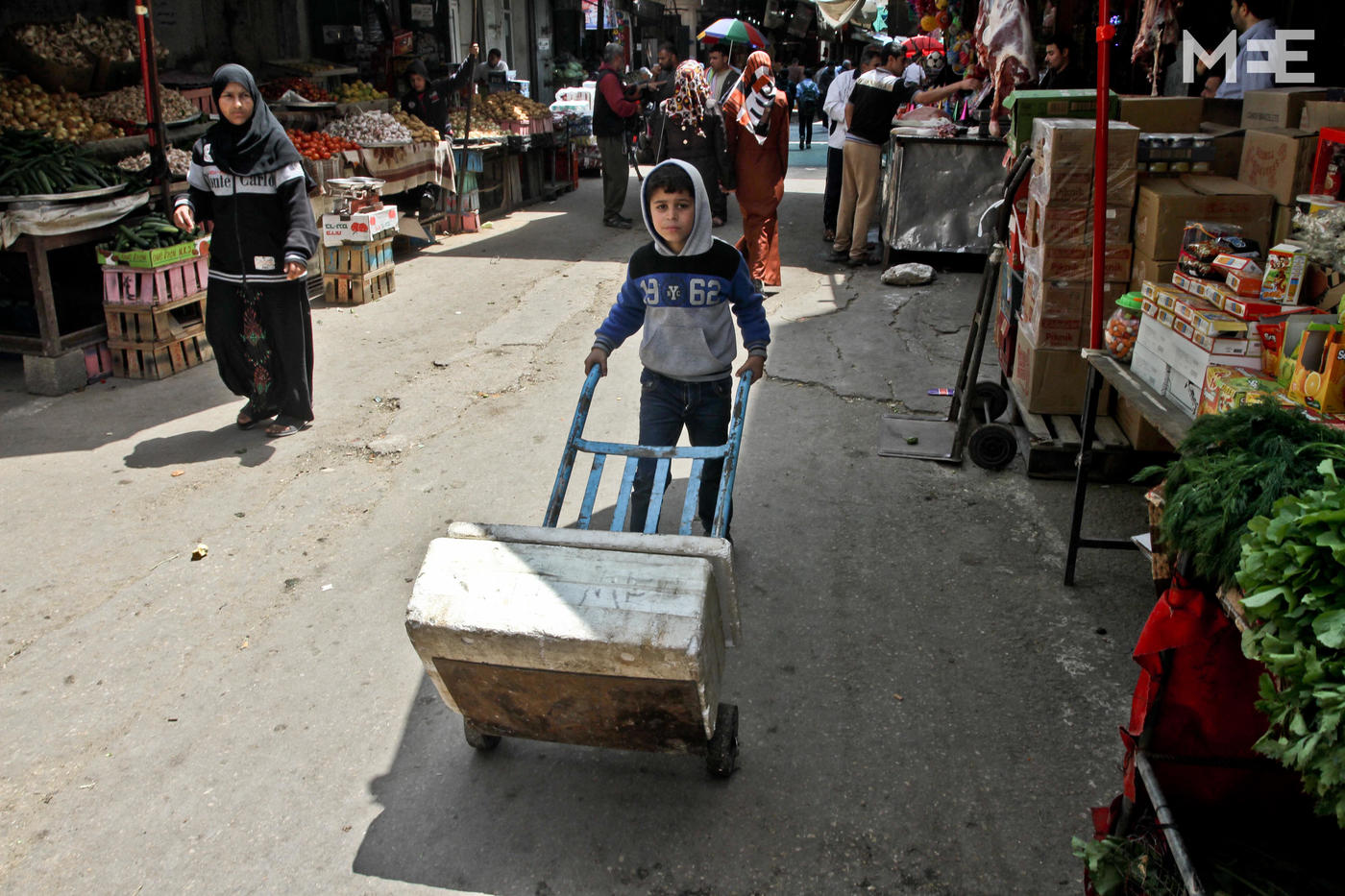 Midnight approaches, and the small feet of Imad Awadallah feel heavy but manage to carry him and his bag across the street to a dark alley. Whoever he meets, he has only two options: sell his boxes of tissues or try to collect a few gifted coins, so he can go home to eat and sleep.

“I have to work to earn extra money - my father is ill, and my mum has no food for us,” says the 7-year-old boy.

A few blocks away, a car stops in front of Imad’s older brother who tries to earn money cleaning cars and wiping tires on the street of Gaza between a baker’s shop and a shop fixing tires.

“I often come from school straight to work in this street,” says his brother Ibrahim Awadallah.

Nearing midnight, the night is not over yet for both children. It’s been a long day, with boxes of tissues still to sell and cars to clean, despite both children being hungry, exhausted and almost asleep on their feet.

“I want to sleep” cries Imad, but he knows that what he earned today is not enough for his family.

The dire conditions in the Gaza Strip have forced thousands of children into work. Child labour has increased despite families’ insistence that their children attend school for a good education.

Gazan economist, Dr. Maher al-Tabaa says “Child labour in Palestine has become an increasingly dangerous phenomenon, forcing children to leave their schooling for the sake of feeding their families.”

The number of children forced, by blockade and poverty, into child-labour is increasing and includes not only those who lost one of their parents during the war, but those who have both parents but they may be unemployed, sick or disabled, and who are unable to provide for their children.

“The most painful part for any child is the feeling that their parents can no longer bring him, or her, the basic necessities of childhood growth,” adds Maher al-Tabaa.

Zuhair Marouf, a mechanic in the east of Gaza City, says that labour laws prevent children from working in extremely hazardous jobs. But every week he gets scores of children offering themselves for work.

“People have no other means of survival, Gaza is closed off, parents have no jobs and business people, like me, can no longer hire people,” he says.

Over 65,000 children between the ages of 7-14 work in the Occupied Palestinian Territories, in addition to 102,000 under the age of 18 who are also working, according to the Palestinian Statistics Bureau. Child labour starts at the sides of busy roads, walking the streets and ending up in factories, often involving hazardous jobs, and handling extremely dangerous machinery.

The social, every day trauma experienced by Gaza’s children within Israel’s siege and military blockade results in them being forced, by necessity, to seek out basic income and new methods of survival. Gaza doctors, say the majority of children in Gaza experience varying symptoms of post-traumatic stress disorder - some continuous, as the trauma has not ended, following last summer’s war.

Israel's assault on Gaza - lasting 50 days - claimed the lives of 547 Palestinian children, 535 of them directly as a result of Israeli attacks, according to a new report by Defence for Children International Palestine. Almost 68 percent of the children killed by Israeli forces, were 12 years old or younger.

Mohammed Abed in Gaza, says that it has become the "norm" for people to send their children out for “civilised begging” on the streets.

“People have dignity, and do not like to beg, but life conditions have made them send their children out to sell simple things, in order to get a basic income.”

The other side of the coin can be seen any day of the week; during early morning, when neatly dressed, school-uniformed Palestinian children proudly attend their UN-run and governmental schools. For years, the United Nations Relief and Works Agency for Palestine Refugees (UNRWA) has played a big part in trying to help protect access to education for children in refugee families in Gaza — the quality of education provided by UNRWA has been highly praised by education experts in Gaza.

Marouf says that he refuses to employ under-age children, but other people do continue to hire children to work.

“I know some people who offer 30 New Israeli Shekels (NIS) per week, and make them work from 7 am till 8 pm,” he says.

Marouf knows this is against labour laws - but sometimes business owners tend to make children stay on shift for too many hours without getting questions from local authorities.

“Employing children and offering them meagre wages are both illegal actions under Palestinian law,” says Marouf, “but when the government can’t support families, people have no other option.”

Marouf says that when there is insurance, all adults are covered, but children who work are not safe-guarded, should something go wrong.

One of those working children with no insurance, is Mahmoud Al-Seqqali, 12 years old. Sometimes he earns 10 NIS per day. “I work because I must eat and have clothes.”

Part of his job is to work on engines and remove the gears of the cars. He's been doing this since he was 8 years old, and he feels this is the only way to get an income, but unlike many other children, he has failed to balance his needs for education and money, so his only option has been to work in the mechanics garage.

“If I had the chance to stay home, I would not do this. But, I had to start work as a child,” he says as his tiny face pokes out from underneath a dysfunctional car.

Meanwhile, al-Tabaa says, says there are very few options to counter child labour in Palestine, where the consensus government should be empowered on the ground to be able to fully function and impose new labour laws that prohibit child labour.

However, he says, “The children and their families must have a chance to earn an income. For this to happen, the blockade on Gaza should be lifted completely-and people given more freedom of movement.”

On average, a child of 12 years old like al-Seqqali has witnessed 3 major wars in Gaza.

Many homeless children, displaced by wars, are housed in public shelters, and don’t see this as a safe, long term home - forcing them to go out and work, while their parents continue to sleep in classrooms.

According to UNICEF, over 96,000 Palestinian refugee homes were badly damaged or totally destroyed during last summer’s conflict, and children continue to feel the impact of displacement.

Al-Tabaa says that for this to end, children need to feel secure in a family home, but with a dire lack of construction materials the new generation of Gaza’s children, may have to join the workforce to achieve any humane level of security.