The American Israel Education Foundation, a wing of AIPAC, has funded trips by 984 members of Congress at a total cost of $10,087,286

Dozens of US groups opposed to their city councils touring Israel have been protesting (Twitter.com/OccupyWallStNYC)
By
Joe Catron

If New York City Public Advocate Letitia James expected anything out of the ordinary, she showed no sign of it on the afternoon of 22 January, as she read a list of resolutions for voice votes by city council members gathered in City Hall.

When the first disruption, the unfurling of a black banner reading “New York City Council: Don’t Tour Apartheid Israel” from the spectators’ balcony overlooking the council chambers, came around 2:30pm, she paused only briefly, glancing up to ask that the council’s sergeant-at-arms “remove the individuals, as well as the paraphernalia”.

Only 12 minutes later, after dozens of protesters had stood in the balcony, individually yelling at the council members below before security guards quickly ushered them from the chambers, did she appear flustered as Council Speaker Melissa Mark-Viverito ordered the sergeant-at-arms to clear the hall of its remaining spectators.

“Thank you for your comments,” Mark-Viverito said sarcastically as three final minutes of chants brought the proceedings to a halt. “We appreciate them."

The protest followed days of campaigning by dozens of local groups opposed to a tour of Israel planned by council members from 15–23 February.

The Jewish Community Relations Council of New York and United Jewish Appeal – Federation of New York will pay for the tour.

After security guards had finally cleared the balcony, Greenfield denounced the protest from the chamber floor. “What you saw here today was naked, blind anti-Semitism,” he said, insisting that the disruption happened “while we were discussing” a resolution commemorating the 1945 liberation of the Auschwitz-Birkenau concentration camps, a claim echoed by pro-Israel media.

Protesters dismissed the charge, saying their action had nothing to do with the resolution. “I see their claims as a tired strategy, to equate critics of Israel with anti-Semites, in order to distract the public from the reality, that Israel is an apartheid state, and is responsible for the genocide of the Palestinian people,” Mette Loulou von Kohl, a member of the Direct Action Front for Palestine, told Middle East Eye.

A video posted online by the city council shows the disruption began during a series of voice votes, long after the discussion of multiple resolutions had ended.

Many opponents of the trip cite Israel’s actions against Palestinians, as well as a call by Palestinian civil society organisations for boycott, divestment and sanctions (BDS) of Israel.
“By agreeing to tour the apartheid state of Israel, city council members are legitimising genocide and ethnic cleansing,” Amin Husain of the Direct Action Front for Palestine told MEE.

“Our elected officials will have the luxury of touring a criminal state that colonises, imprisons, bombs and murders Palestinians with indifference and impunity, thereby whitewashing these despicable crimes instead of holding Israel accountable and standing on the side of freedom and justice.”

Others question the ethics of elected officials accepting expensive tours as gifts from interest groups.

“It is extremely problematic for federal, state and local elected officials to participate in all-expenses-paid junkets to Israel on the dime of pro-Israel organisations,” Josh Ruebner, policy director of the US Campaign to End the Israeli Occupation, told MEE.

The legality of the funded trips hinges on a murky patchwork of state and local laws and agencies.

The legality of a gift also depends on its source, Horner said. “Generally speaking, elected officials can accept gifts from bona fide charities and cannot accept gifts from lobbying groups, although there are exceptions, and often whether a gift is allowed is case-specific.”

Although the UJA–Federation of NY is registered with the city government as a lobby, whose targets include council members, the JCRC–NY is not, according to a database maintained by the Office of the City Clerk.

However, the JCRC–NY "maintains a dialogue between the Jewish community and governmental officials at the city, state and federal levels," "hosts discussions between Jewish communal leadership and key elected and appointed officials," and "advocates on local to national issues and legislation which affect the Jewish community," according to the organisation’s website.

The city’s lobbying law defines lobbying as including “any attempt to influence … any determination made by the city council or any member thereof with respect to the introduction, passage, defeat or substance of any local legislation or resolution.”

Over a period of two weeks, each of the 15 council members failed to respond to repeated requests from Middle East Eye to comment on the trip. The JCRC–NY and the UJA–Federation of NY also did not respond to requests for comment.

While it has drawn unusual public opposition and media attention, the trip reflects broader, ongoing efforts by pro-Israel groups to cultivate ties with US local governments, often through paid trips.

"I'm sure the answer is a ton," Ruebner said of the number of officials who have accepted them, although he added there is no comprehensive list. But he said many had participated through Project Interchange, an agency of the American Jewish Committee which has sent 6,000 delegates to Israel. Its website lists tours by local government officials both from specific cities and across the US.

For federal officials, the picture is clearer due to reporting requirements. The political database, LegiStorm, shows that the American Israel Education Foundation, a wing of the American Israel Public Affairs Committee (AIPAC), has funded trips by 984 members of Congress at a total cost of $10,087,286. Local organisations also market their tours on Capitol Hill. The JCRC–NY has sponsored trips to Israel by 51 New York City-area members of Congress, costing the group $194,319.

These tours, at least, seem legal, if ethically questionable. “Despite the Honest Leadership and Open Government Act, foreign governments and non-profits may still take lawmakers on overseas trips, and lobbyists can accompany them,” Viveca Novak, editorial and communications director at the Centre for Responsive Politics, told MEE. "Is it ethical? Opportunities still exist for the kind of you-scratch-my-back-I'll-scratch-yours cosiness that was a hallmark of the Abramoff schedule."

But with free trips accepted by local officials across the country regulated by numerous agencies and often poorly enforced laws – or none at all – at the town, country and city level, and officials often refusing to answer questions, no reliable figures exist, and conclusions about legality are often hard to reach.

A scheme to normalise

As New York City Council members near the 15 February date of their departure for Israel, the campaign against the trip continues. More protests will come, opponents of the tour say. Ruebner adds that city residents have used an online form to flood council members with over 12,000 emails opposing the tour.

“I see this trip as a scheme to normalise the atrocities of Israel in the eyes of American politicians and public,” von Kohl said. “As a Palestinian New Yorker, I am appalled, and demand that these council members put their ego and political agendas to the side and remember who they represent.” 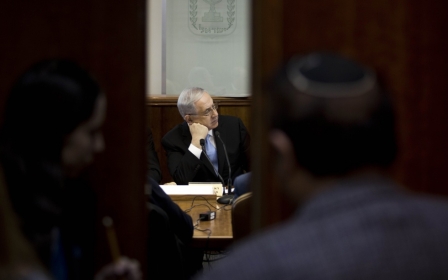