The other side of Kasserine

Portrayed as a militant hide-out, Kasserine's residents say they are more concerned about unemployment than attacks associated with their city 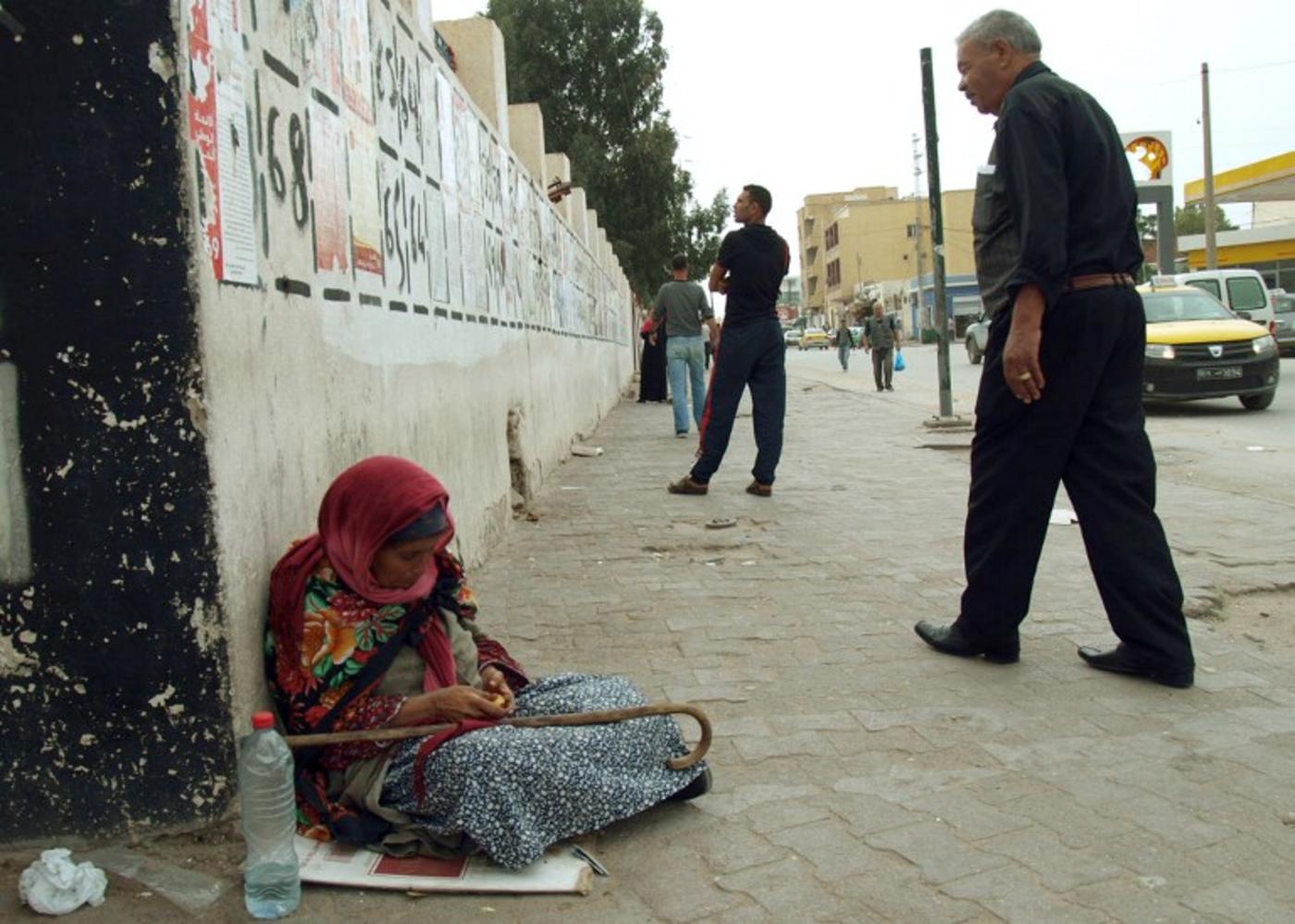 KASSERINE, Tunisia - “You hear that buzz?” asked Sourour Abdallah’s father as the family prepared dinner at their house in the city’s Ezzouhour neighbourhood.

“What you can hear is one of those unmanned planes,” he said. “A drone?” “Yes, a drone,” he replied and added casually, “at least they make less noise than the helicopters”.

Just a block away from Martyr Square, a monument erected in remembrance of locals killed during the country’s 2011 uprising, life at the Abdallah house – and in Kasserine in general – is nothing like it used to be before the revolution.

Sourour, a 21-year old English student, described how helicopters can be heard on an almost daily basis and how Chaambi Mountain is often bombed when the night falls. Sourour’s family explained that they can hear the bombs every other night. The air strikes target alleged terrorist camps and are part of the government’s anti-terrorism operation. Since the revolution, the mountain shadowing the city, only 15 kilometres away, has become a hideout of alleged terrorists in the increasingly volatile border region to Algeria.

“Kasserine has changed so much,” said Sourour who grew up here. “When I was young we used to enjoy the mountain region during school trips and week-ends and I’ve been to the top of the mountain [Tunisia’s highest peak] four times,” she said proudly.

It is evident that the nature and close mountain region has been an important part of people’s lives here. Sourour’s mother happily shows a large variety of herbs, all, she explained proudly, from the Kasserine region. “Even tourists came to visit the National Park,” said Souror. “It wasn’t like a tourist spot, but there were for example Germans who came for the nature, to hunt and camp.”

But these days, hiking that was once frequent is now impossible in the area that has now became a closed military zone, patrolled by Tunisia’s National Guard. And Sourour said she worries that the bombings will scare off animals and destroy the mountain’s natural beauty.

Since the revolution which ousted former President Zine El Abidine Ben Ali, the country has seen an increase in violent attacks in levels unseen during the regime of Ben Ali. A security void in post-revolutionary Tunisia, said Isabelle Werenfels, head of Middle East and Africa research division at the German Institute for International and Security Affairs, has paved the way for the rise of militants.

“There has always been smuggling in this part of the country, but not this kind of jihadi activity,” Werenfels said.  Tunisia’s weak and poorly equipped military, the free flow of foreign funds after the revolution and decreased border control to both Algeria and Libya, are factors, she said, that have made it possible for groups such as Ansar al-Sharia to recruit more openly.

Consequently, the mountain’s closest city Kasserine is often portrayed in media as a terrorist hide-out, and the border region as a whole has become known through a security prism.

It was also in Kasserine that Tunisian security forces used live bullets on protesters during the country’s uprising for the first time. After Mohamed Bouazizi’s self-immolation on 17 December 2010, protests spread around the marginalised region and five days of clashes erupted between security forces and protesters in the city. Between 8 – 10 January, 15 people were killed by police gunfire, many of them young, according to a Human Rights Watch report.

Since the revolution, the mountain region has experienced a number of clashes between various militant groups and the security forces. In 2013, during Ramadan, the country was shaken by the news that eight young patrolling soldiers had been killed by militants in Chaambi Mountain area, with gruesome coverage showing stripped and slain soldiers that shocked the Tunisian population. No group claimed responsibility for the attack.

On 27 May of this year, a group of militants attacked Interior Minister Lotfi Ben Jeddou’s family residence in Kasserine, killing four policemen. Al-Qaeda and Uqba Ibn Nadaa factions, hiding in the mountains, claimed responsibility for the assault. A few days after the attack, demonstrators in Kasserine took to the streets to denounce terrorism. Jeddou’s residence is now heavily protected around the clock.

Then on 16 July, 15 soldiers were attacked and killed by 50 heavily armed men, according to news reports. Ansar al-Sharia endorsed the attack and indirectly claimed responsibility, said Werenfels. “This was the first time the group fully endorsed domestic violence,” she said.

Despite the threat of al-Qaeda in the Islamic Maghreb (AQIM) and Ansar al-Sharia and their attacks this year, the biggest challenge facing the Chaambi region right now is Uqba Ibn Nadaa, said Werenfels.

“The most important group that is hiding at the moment is Uqba Ibn Nadaa, which is made up of members of Ansar al-Shariaa’s violent wing and entertains links to other jihadi groups such as al-Qaeda,” said North Africa analyst Anne Wolf.

From the mountain, Uqba Ibn Nadaa is plotting attacks on Tunisian security forces and has killed many Tunisian soldiers, Wolf said. “Members of Uqba Ibn Nadaa say that they will continue these attacks because the state is cracking down on them.”

Uqba Ibn Nadaa, which started to operate in Chaambi region in 2012, is composed by mostly Algerians but also Tunisians, explained Werenfels, “You can not survive and resist the military this long if you do not have local support and know the region very well,” she said. It is difficult to know why the group began to operate in Chaambi, but one hypothesis is that strands within Algerian AQIM considered the revolution an opportunity to create a new safe haven in the mountain. Exactly what they want is unclear, but judging from their actions, she said, they are following the pattern of al-Qaeda in northern Algeria, which only attacks state officials and security personnel. “Clearly, they want to weaken the security forces and the state,” concluded Werenfels.

Many of Kasserine’s 100,000 inhabitants take the terrorist threat with a grain of salt, Sourour said. “People here believe it is exaggerated,” she said, arguing that people blame the politicians for the deteriorating security situation. Some even argue that politicians keep the focus on security issues, rather than more pressing local concerns like unemployment, it as part of a ploy to win votes. “This problem [the terrorist threat] is completely new and, to be honest, most people have never even seen anything here in Kasserine,” she said.

Like many Tunisian cities, Kasserine’s streets are occupied by middle-age men who spend their days sipping coffee, while teenage guys kill time hanging around on street corners, smoking or playing football. For a visitor unaware of the threat from the border region, the city seems like most other Tunisian small-towns, quiet and calm, with a majestic mountain in the background.

Besides the looming security situation, people in Kasserine, like most Tunisians, worry about the strained economy, especially high unemployment. Kasserine has one of the country’s highest unemployment rates and many of the city’s youth have few activities with which to fill their days, leaving them susceptible not only to the influences of violent religious groups but also drug use, said 35-year-old calligraphy artist Karim Jabari who is from Kasserine.

Jabari painted a now famous graffiti mural in his hometown. He said he hoped it would “start something positive”. The 250-metre click of colour is a verse of Tunisian poet Abu Alqassem Chebbi, which encourages people to work hard and fulfil their dreams. It took Jabari a month to finish, with the help of many locals. “For once,” he said, “something positive happened in the city.”

Jabari was also involved in a three-day workshop in the end of 2013, in memory of the revolution. Street artists from all over the world came to the town to put colour on its grey surfaces and offer workshops on hip-hop, street dance, photography and graffiti, something they would give the city’s youth hope. “The youth I have met in Kasserine are full of energy, which is why I want to continue these kinds of initiatives,” Jabari said.

Ahead of Tunisia’s October parliamentary elections, Interim President Mehdi Jomaa announced that intelligence drawn from detainees in the country’s prisons revealed that militant groups including Ansar al-Sharia and AQIM in the Chaambi mountains were planning to attack during the elections.

Despite the warnings, the elections passed without a hitch or attack with Nidaa Tounes securing the majority of votes in the Kasserine governorate, beating out Ennahda.

But as the presidential vote on 14 December approaches, analysts warn that the parliamentary outcome could draw further attacks from Mount Chaambi.

“The victory of a secular party, Nidaa Tounes, in last month’s parliamentary elections, could heighten the risk of religious violence,” Wolf said. “Many radical Islamists already considered Ennahdha as ‘un-Islamic’ but secular parties are certainly even bigger adversaries to them.”

In the long term, said Wolf, combating militants in the mountains will require the state to take a comprehensive approach in the area, including focusing on educational programmes and, perhaps mostly importantly, responding to “the socioeconomic marginalization of wide sectors of the population”.

Despite helicopter hovering and distant night bombings, constantly reminding the city’s residents of the troubles in the mountain, life in Kasserine must go on.

“People in Kasserine are not afraid, they are brave,” explained Rabiaa Najlaoui, a Nidaa Tounes politician born in Kasserine.

“When I am in Tunis and see all media coverage, I believe that it is a huge problem,” Najlaoui said, “but then I go back home and I see the hope in the eyes of the people even though they are socially and economically in a very bad situation.”