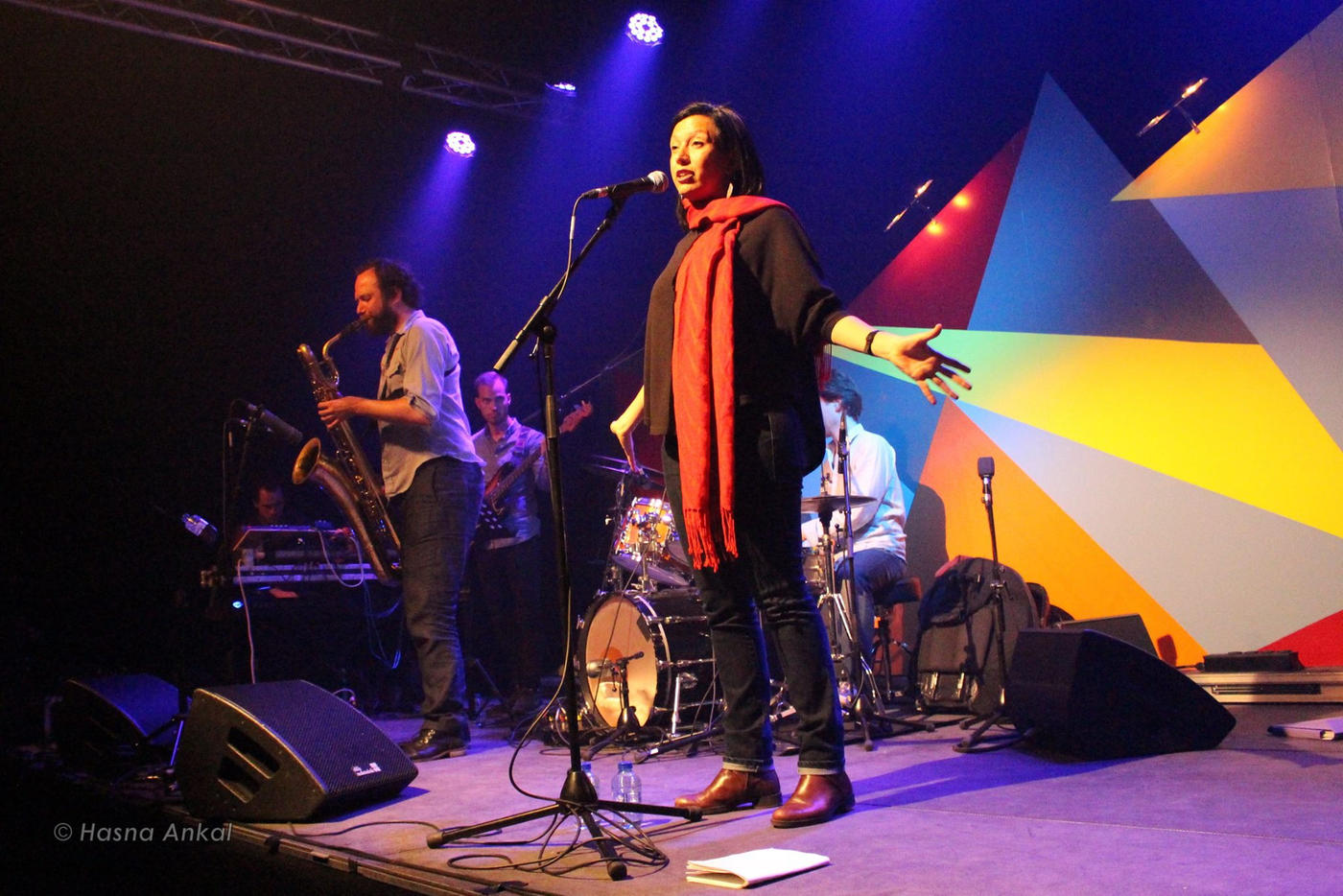 The first time I saw Rafeef Ziadah perform poetry was in Cape Town, South Africa in November 2011. I was there as coordinator for the Russell Tribunal on Palestine and Rafeef was one of the speakers that we had invited.

South Africans know about apartheid, segregation, persecution and racism like no one else. Despite the fact that apartheid legally fell in the 90s, with Nelson Mandela adopting a neo-liberal economic trajectory while in power, an economic and social type of apartheid still exists that is felt by the under-privileged on a daily basis. When I was there with the tribunal, I realised that we in the West had so much to learn from South Africans: their history of struggle, but also their current resistance.

On the Saturday of the event, Boycott Divestment and Sanctions (BDS) activists in Cape Town organised an evening with iconic figures from the Palestine liberation movement Leila Khaled and Jamal Juma'a. Rafeef was there too as she had flown in from London a few hours before.

Following the speeches, Rafeef performed one of her poems to a 400-strong electric audience. When she finished, she could barely stand. The audience, on the other hand, was on its feet and gave her a few-minutes-long standing ovation.

South Africans know when they hear something special and powerful. After all, they sing through joy and anger to celebrate life and death. Watching Rafeef perform, they knew she was one of them and that she belonged to a global social movement which was fighting to stop all forms of apartheid - wherever it took place.

I caught up with Rafeef before her recent album launch in London on 26 February, an event that was part of the activities during Israeli Apartheid Week 2016. The album is called We Teach Life after the poem that made her famous when a recording of it went viral on YouTube.

Rafeef’s family are Palestinian refugees in Lebanon, which is where she was born. However, she explains to me, “a lot of people assume that Palestinian families are divided according to the demarcation lines of Israel’s occupation, but it’s never that simple. Half my family are Palestinian citizens of Israel and the other half refugees in Lebanon. My experiences have been marked by this statelessness and lack of documentation."

Rafeef has lived in many places including Greece, the United States, Canada and now England. These various places have all left traces on her performance style and words.

Poetry as a means of survival

"Palestinian resistance poetry has been a significant inspiration. The poetry of Mahmoud Darwish, Samih al-Qasim and Tawif Zayyad among others were not mere words – they sustained us through wars and exile.”

English is not Rafeef’s first language, although one could hardly tell from watching her perform. Learning English allowed her to discover other forms of poetry including spoken word and dub poetry. She had been performing for three years before she thought about putting her first album together.

To produce her first album Hadeel, based on her live performances, Rafeef worked with Toronto-based artist Rose from the group LAL. “Rose was very supportive and understood the difficulties of producing independent music. We eventually worked out how to capture the energy from live performances on the album. Initially I was too nervous about studio recording.”

Rafeef was an activist long before her first album came out. She was co-founder of Israeli Apartheid Week, the Toronto Palestine Film Festival and the Coalition Against Israeli Apartheid. When the album was released, people were a little surprised but very supportive, and it was received very well.

“I am often asked how my activism and poetry relate, I think one feeds the other. I do get frustrated at times that in activist spaces, art is often seen as something detached from the day to day campaigning. Somewhere along the line we lost the knowledge that art is central to sustaining social movements.”

After listening to her work, British film director and activist Ken Loach said: “Rafeef 's poetry demands to be heard. She is powerful, emotional and political. Please read her work and see her perform. You cannot then be indifferent to the Palestinian cause.”

It has taken Rafeef some time to produce her much-awaited second album. In the interim she has completed her PhD, worked at the British charity War on Want and started a postdoctoral fellowship, along with being active in a number of successful BDS campaigns.

The now famous video “We Teach Life” almost came about by accident. It was filmed by activist and film-maker Kes Sternchen, who was actually at the event to record another poet. The video found its way onto YouTube, and changed everything. It became a phenomenon, an anthem for a movement. Roger Waters, Pink Floyd co-founder, one day told me that he loved it so much he shared it with many of his friends. Later that year while in Australia for a BDS conference, she performed with Australian song writer and composer Phil Monsour.

“Phil was surprised I hadn’t recorded the new poems and we decided to start work on a second one.” We Teach Life was born.

"It was a great experience to collaborate with musician-activist Phil Monsour on this album," says Rafeef. "We worked to make sure the music supported the words, although we work in completely different genres, we were invested in highlighting the narratives. The poems on this album, much like my first one, are based on true stories from Palestinians in historic Palestine and in exile."

"I am happy to say this album is a collective effort, many amazing people supported the crowd-funding campaign to make sure we got through all stages of production.

"The title of the album is based on the poem ‘We Teach Life, Sir’ that dealt with mainstream media bias against Palestinians, but the different poems capture a broader experience including the overt racism of North American and European border policies.

Rafeef sees art as a crucial tool in any social movement; even more so when it is faced with a massive crackdown, such as the one the pro-justice movement is tackling at the moment. “New guidelines and motions aimed at stifling BDS campaigning were to be expected, after all Israel is able to act with impunity because it is shielded from criticism by supportive allies. The new orchestrated crackdown is a direct response to a growing international solidarity movement in support of Palestinian rights.

"However, one of the strengths of BDS campaigning is that instead of Palestinians scrambling to get our narrative across, the Israeli state has to now respond to us, on our ground, and speak about BDS or Israeli Apartheid Week. So already we have shifted the debate and the attempts at silencing by various states are so obviously desperate.”

Rafeef emphasises that the repressive measures against BDS campaigning must be understood in a broader context: “In England, this is part and parcel of the Tory government’s unrelenting attack on civil liberties and local democracy, it follows the Trade Union Bill, the Lobbying Act, the Prevent Framework, etc.”

BDS as a way forward

Rafeef is part of the Palestinian BDS National Committee (BNC), the coalition of Palestinian organisations that issued the call for BDS in 2005.

“We are a very young movement, we are ten years old. When BDS just started people thought that it would never work.”

In the first 10 years since the movement's inception, the shift in conversations regarding Palestine and the fact that people are doing BDS activism to the degree that they are, is an impressive success.

“This is thanks to a lot of hard working people. We often forget to celebrate the hard work of people especially because we know the situation in Palestine is very dire. But we should remember that often activists finish two jobs and go home at the end of the day, and give their time to support BDS campaigns.”

Rafeef explains that being involved in Palestine solidarity is often a very tiring and sometimes disheartening experience. The movement seems to be growing, public opinion has definitely shifted over the last decade, as many polls show, but the situation on the ground has never been worse.

The lack of political vision from the Palestinian Authority accounts for a lot, and the choices of the past still have an impact on the present.

“I think we have to be honest about the fact that there is a crisis in internal Palestinian politics. The so-called Oslo peace process took us in the wrong direction and the most destructive one at that. Agreed at secret negotiating tables, it amounted to a reconfiguration of Palestinian demands for justice into demands for dysfunctional state apparatuses. It is hard to come out of that, but we have to try.

"Considering this, for solidarity activists BDS is an important way to be intervening right now because it tackles their relationship with their own governments and their own modes of complicity – these have to be challenged at all times.”

One thing for is certain: Rafeef Ziadah will be part of this conversation for a very long time. As Angela Davis recently wrote: “Every social struggle needs its anthem and Rafeef Ziadah provides just that for the growing pro-Palestine movement. The words that she says with such beauty and grace hit you right in the heart. They are more powerful than any weapon."

Rafeef will be touring the UK and Ireland in May. For more information, visit her website and her Facebook page. 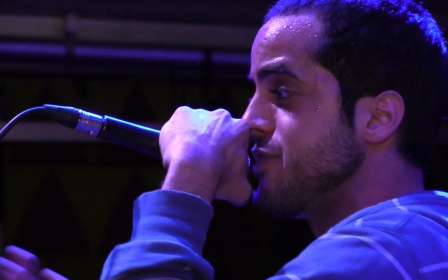 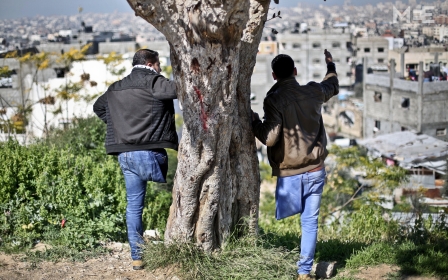 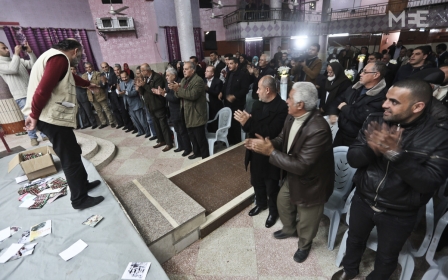