Sudan's military council and opposition have so far failed to agree to a power-sharing agreement (Reuters)
By
Mohammed Amin
in
Khartoum, Sudan

Several areas across the Sudanese capital have been left at a standstill, as workers at airports, banks, and other businesses walked off the job amid simmering anger over a failure to reach an agreement on Sudan's political transition.

Sudanese protesters began a nationwide strike on Tuesday as part of their effort to push the Transitional Military Council (TMC) to hand over power to civilian leadership, more than a month after longtime President Omar Al-Bashir was ousted. After sunset, Sudan's protesters take to the streets
Read More »

Workers at airports, banks, electricity and telecommunication companies joined the strike, leaving hundreds of passengers stranded at airports and bus terminals across Khartoum.

Employees observing the strike at Khartoum's main bus terminal carried banners reading, "Today, tomorrow no buses as we are on strike".

The strike comes as talks between the TMC and Sudan's coalition of opposition groups came to a standstill after weeks of negotiations over whether the military or civilians should take control of the country.

So far, the military and civilian leadership have failed to reach an agreement over the composition and the chairmanship of a joint council tasked to lead Sudan following the ouster of Bashir in April.

A senior staff member at Tarco airline told MEE that the strike has led to the suspension of all internal flights out of Khartoum, while staff at the Association of Sudanese Pilots also confirmed the disruption to internal flights.

However, a spokesperson for Khartoum Airport told MEE that it was operating normally, adding that two international flights landed at the airport on Tuesday.

"The civil aviation authority is operating normally despite the strike of the employers of some companies," said Mohamed Mahdi Abdoun, without providing further details.

Despite this, there was a heavy military presence in and around the airport today, with more than 20 army vehicles deployed.

Addressing bankers at a sit-in in front of the army headquarters, Hamid Mohamed Hamid, a senior staff member at the bank, confirmed that all operations had been suspended for two days.

Commercial banks, including the Bank of Khartoum, have also reportedly joined the strike, stopping any transactions while the ATMs services were also shut-off.

Talks between the TMC and the Declaration of Freedom and Change Forces (DFCF) alliance are at a standstill after weeks of negotiations over the role of Sudan's military in future governments.

Wagdy Saleh, a representative of a coalition within the DFCF, said in a news conference that the TMC had demanded a two-thirds majority - eight seats out of 11 - on the sovereign council that will lead the country. Rhythm of the revolution: The iron heartbeat of Sudan's sit-in
Read More »

If an agreement is not reached with the TMC, the DFCF will escalate the protest by calling for an open strike and an indefinite period of civil disobedience until the power is handed to civilians, Saleh said.

The Sudanese military ousted and detained Bashir on April 11, ending his 30-year rule after 16 weeks of street protests against him.

Those protests, which began over soaring bread prices, were spearheaded by the Sudanese Professionals' Association, part of the DFCF.

Meanwhile, the deputy head of the TMC, General Mohammed Hamdan Dagalo, criticised opposition leaders on Monday, saying they did not want to share power and instead aimed to relegate the military to a ceremonial role.

"These people's goal is for us to hand over to them and return to our barracks," he said. 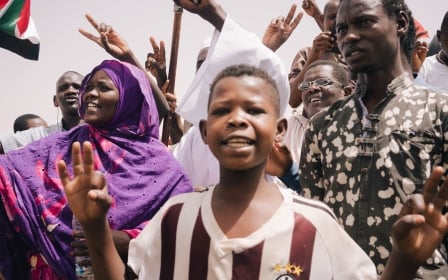