Sudan's Omar al-Bashir: How coup leader and longtime president was ousted from power 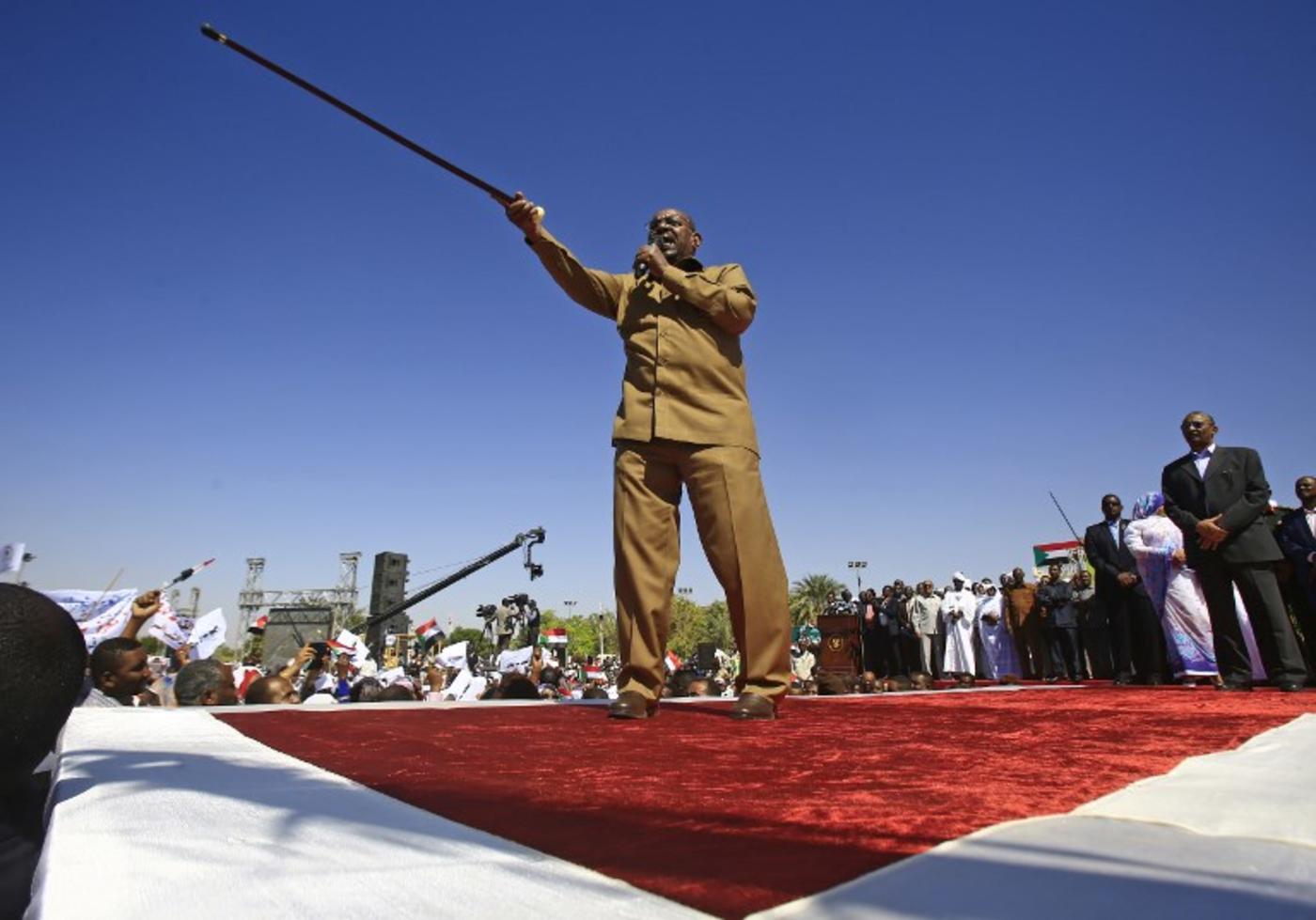 Bashir came to power after a successful 1989 coup, appointing himself president a few years later (AFP/File photo)
By
MEE staff

Sudan's longstanding president Omar al-Bashir had been removed from power and detained by the army, months after protesters first took to the streets across the country demanding his resignation.

For decades, Bashir presided over one of the most murderous regimes of recent times, with hundreds of thousands killed in the Darfur genocide alone. His capacity for self-preservation was extrordinary, though, and he managed to cut deals with more or less every major international government and organisation, from the US to China to the European Union.

A military leader who had served as Sudan’s minister of defence, Bashir led a successful 1989 coup, later naming himself chairman of the Revolutionary Command Council.

He then dissolved the country's elected government, banned political parties and trade unions, and ushered in a series of restrictive measures to cement his grip on power, including a ban on demonstrations and the imposition of a state of emergency. In the early 1990s, the country's ruling National Congress Party (NCP), of which Bashir sat at the helm, "steadily purged the bureaucracies and the judiciary of ‘secularists’ and people loyal to other political parties", Human Rights Watch said.

In October 1993, Bashir formally appointed himself as Sudan’s president, winning a series of subsequent elections that he all but controlled.

The elder statesman has routinely used military law and other restrictive measures to retain his grip on power since then, in the face of growing economic problems, international isolation, and political pressure both inside and outside Sudan.

In August 2018, the NCP once again backed Bashir's bid for re-election.

At the time, the president vowed to "meet all the demands of our people to pass the many crises we are facing in this critical time in the history of our nation" if re-elected in polls set for 2020, and he promised to further cement Islamic law in the country.

This promise was always a key part of Bashir's offer to the Sudanese people, his advocation of an Islamic state coming alongside a persistent criticism of Western secularism.

But last year, Sudan's longtime leader faced mounting criticism from within his own party, with key NCP members rejecting his nomination for the presidency, and some saying he wanted to stay in power only to avoid facing the International Criminal Court.

The ICC issued arrest warrants for Bashir in 2009 and 2010 for his role in the genocide in Darfur less than a decade earlier, which left hundreds of thousands of people dead and millions displaced.

The court accused Bashir of crimes against humanity, war crimes and genocide, in relation to the murder, torture, rape and other systemic attacks against civilians in the west Sudan region. He spearheaded atrocities against his own people not only in Darfur, but in the Nuba mountains, South Kordofan and Blue Nile.

Bashir resisted the arrest warrants against him, and over three decades as president, he routinely denounced Western forces for allegedly trying to interfere in Sudan, while at the same time doing deals witht the West. He passed intelligence on militant Islamist groups to the Americans, he managed migration for the EU and he was a client to the Russians and the Chinese. Recently, Sudanese soldiers could be found fighting for the Saudi-led coalition in Yemen, in exchange for Saudi riches.

Still, Bashir blamed these unnamed, outside actors of seeking his overthrow - and rejected any outside interference in the country's affairs. It was a spectre he raised again and again.

"We will never go backwards because of the ongoing conspiracies against us," he said in August.

But it was domestic challenges that truly precipitated the end of Bashir's rule, as his popularity at home dramatically declined in the face of an ongoing economic crisis, and as efforts to breathe life into the Sudanese economy failed.

This time he couldn't get away with simply blaming malign foreign actors for problems at home.

'His popularity has sharply decreased and the country is subjected to different kinds of crises, in addition to international isolation'

"His popularity has sharply decreased and the country is subjected to different kinds of crises, in addition to international isolation," political analyst Elimam Ahmed told MEE in August.

In fact, the mass protests across Sudan, which first erupted on 19 December and have proven to be an insurmountable challenge to Bashir, began as a result of public anger over a rise in the cost of bread. International support for this resistance was nowhere to be seen.

"It has taken a million Sudanese, mostly women, to get rid of this regime," Patrick Smith, editor of Africa Confidential, told Middle East Eye. "They want to know where the rest of the world has been all this time. It is a cultural revolution as much as a political one and young women are playing a key part."

The protests that began last year later morphed into a wider call for the president to step down and allow an inclusive political transition to take shape.

Last month, Bashir handed the NCP leadership to a new deputy, a move that was widely seen as his attempt to stem the demonstrations.

The president also instituted military rule, outlawed protests, and rounded up hundreds of pro-democracy activists as the rallies continued countrywide.

Those steps came after months during which Bashir insisted that political change could only come at the ballot box, continuing to blame the unrest on outside forces seeking to destroy Sudan.

Bashir has faced censure from human rights groups and others for almost the entire duration of his presidency.

Most recently, the Sudanese authorities have been accused of arbitrarily arresting, detaining and torturing opposition activists, journalists and other perceived critics; bringing apostasy charges against non-Muslims; unlawfully deporting asylum seekers; and authorising a violent crackdown on civilians in several conflict-ridden states, among other things.

But while Bashir was sought by the ICC and was regularly condemned by rights organisations and activists inside Sudan, he retained support from several world governments.

In fact, many countries backed him in recent months, especially in the Middle East and Africa, where leaders feared that popular protest could spread from Sudan to their respective countries.

In December, only a few days before the protests first broke out in Sudan, Bashir went to Damascus to meet Syrian president Bashar al-Assad.

The two leaders also stressed the need to build "new principles for inter-Arab relations based on the respect of the sovereignty of countries and non-interference in internal affairs", Syria's state-run SANA news agency reported at the time.

Egyptian President Abdel Fattah el-Sisi, accused of carrying out his own crackdown on dissent, backed Bashir, saying the Sudanese leader's continued hold on power was necessary for Egypt's national security.

In the early days of the Sudanese protest movement, Qatar, Saudi Arabia, China and the United States also said they had an interest in keeping Bashir in power in Sudan.

But even tacit support for his presidency ultimately eroded this week, after thousands of protesters broke through a security cordon to hold a sit-in at the Sudanese armed forces building in central Khartoum.

Participants in the days-long rally in the Sudanese capital called on the country's military to intervene in support of their movement. Middle East Eye understands that young army officers have been behind the movement to unseat Bashir, and that it is only older officers above the rank of colonel who maintained an interest in keeping the regime in place. This week, the US, Britain and Norway also finally backed the protesters' demand for a political transition to help Sudan get out of the current impasse.

"The time has come for the Sudanese authorities to respond to these popular demands in a serious and credible way. The Sudanese people are demanding a transition to a political system that is inclusive and has greater legitimacy," the countries said in a statement on Wednesday.

On the one hand, the US played a role in isolating Sudan internationally, keeping the country on its blacklist of state-sponsors of terrorism.

But under former US President Barack Obama, Washington sought to ease sanctions on Sudan in exchange for the country's help with counter-terrorism operations, among other things. Bashir, ever a dealmaker, had found a way of making himself useful to the Americans.

Negotiations had been underway to get Sudan removed from the state sponsors of terrorism list - a step that Bashir saw as critical to reviving the country's struggling economy - however talks have stalled since the mass protests broke out last year.

In the end, it was the Sudanese people themselves who came for their leader, in a movement that has risen from the ground up and shows no signs of abating.