Live: Protests continue in Sudan after Bashir toppled in 'coup' 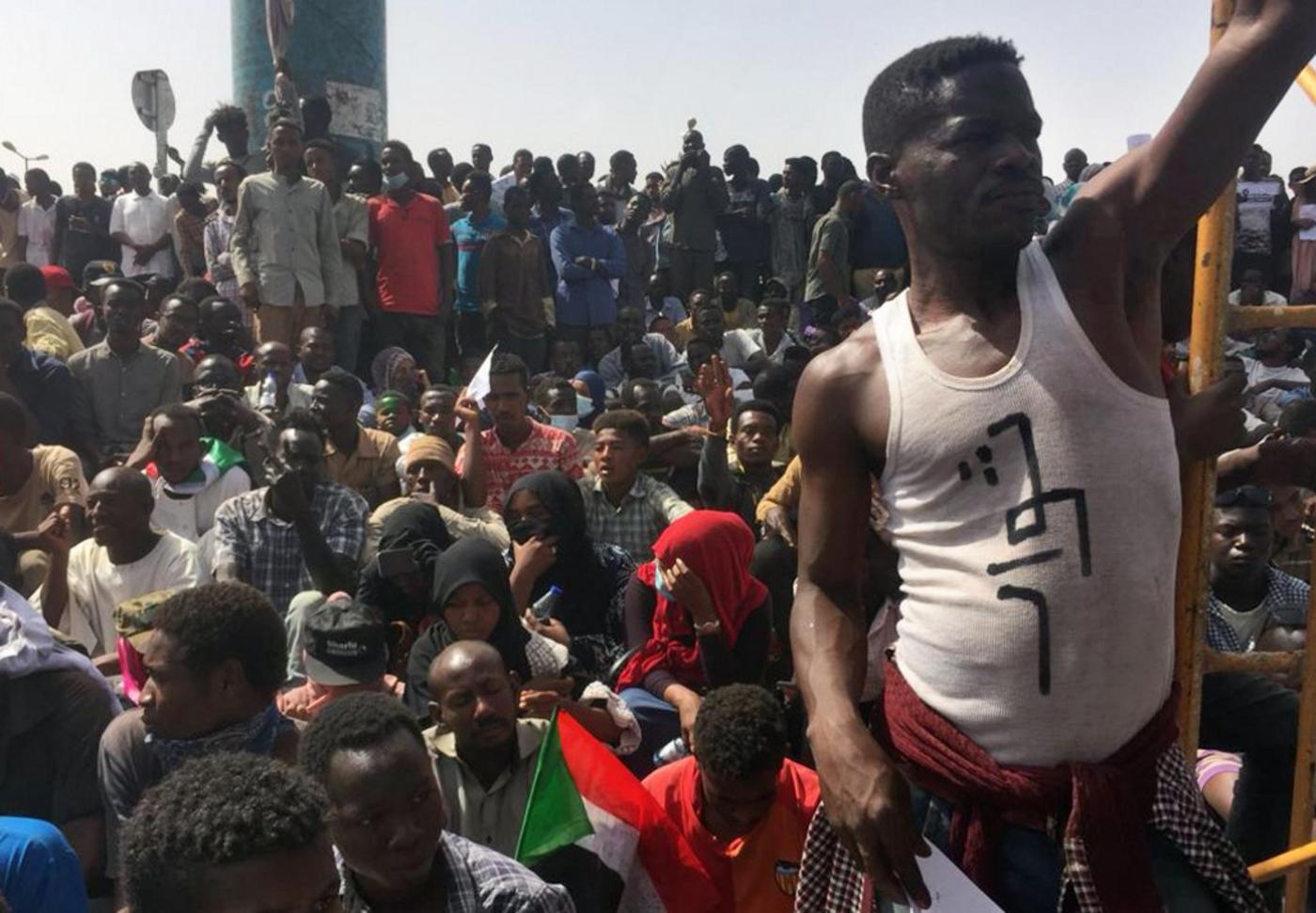 After the Sudanese military ended Omar al-Bashir's 30-year rule on Thursday, protesters across the country rejected the new authorities' plan for a two-year "transitional period".

Throughout Thursday and Friday, demonstrators defied the country's new rulers, demanding a civilian government, as the joy over toppling Bashir quickly turned into anger against his successors.

Late on Thursday, Defence Minister Awad Ahmed ibn Auf was sworn in as the head of the "Military Transitional Council".

Ibn Auf is said to be close to Egypt's Abdel Fattah el-Sisi, and last year, he called Sudan's participation in the Saudi-led war in Yemen a "moral duty".

In Khartoum, activists remained in the streets despite a military-imposed curfew after 10 pm local time. Today, hundreds of thousands rallied across the country after Friday prayers.

The curfew also appears to be facing its challenge for a second night running as protests around the country show no signs of dissipating.

The transitional council is also facing an internal crisis, as the country's influential paramilitary force abandoned the council and its plans on Friday.

Thank you for following MEE's live coverage of Sudan.

Protesters around Sudan prepare to defy curfew
2 years ago

The curfew the military has imposed on Sudan appears to be facing its challenge for a second night running as protesters flood into the streets around the country.

Hundreds of thousands have gathered outside the defence ministry in Khartoum, Reuters reported, and others have come out in Darfur, North Kordofan in central Sudan, Atbara and al-Gadaref in the north and elsewhere.

The military council in charge of the country has striked to strike a conciliatory tone, rejected by protesters, but also warned that it would not tolerate disturbances.

“The revolution was stolen, Ibnouf does not represent you, he represents Keizan (NCP), we’re staying”

Memes and more traditional political cartoons have been flooding Sudanese social media circles as posters vent their frustration about a protest movement they feel has been hijacked by the military.

A lot of that creative anger has been focused on Awad ibn Auf, the defence minister who was sworn in as the head of the military council who has taken control.

Omar al-Bashir being substitued in for ibn Auf

Intelligence chief Salah Gosh held up by Alaa Salah, the 22-year-old student protesters whose image has become an icon of the protest movement.

Sudan's Rapid Support Forces have withdrawn from the military council that took control of the country on Thursday.

In a statement published on Friday it said it "apologised for participating in the military council" and promised to work for "the protection of the Sudanese people".

Hemedti was a former leader of the Janjaweed militia accused of widespread killing of civilians in Darfur.

Friday prayers at the protest
2 years ago

Translation: Picture from Friday prayer at the site of the army headquarters sit-in

Friday's weekly prayers have been held at protest sites in Khartoum and other cities as organisers insist protesters keep the pressure on the government.

Translation:  Video recording of the crowds at the sit in in front of the Second Infantry Division and the call for Friday prayer 12 April 2019, responding to the strong call freedom and change and rejecting the coup of the military council in Khartoum.

LIVE: Sudan security sent message yesterday to editors in chief of newspapers informing them that media censorship is now lifted "to work with full freedom". Newspapers this morning reflect the decision writing headlines which were unthinkable 48 hrs ago.

Sudanese intelligence have been censoring newspapers since the beginning of the protests in December but appear to have now allowed them more freedom, leading to a big change in coverage.

"Fallen" read the top of al-Intibaha newspaper, a reference to the popular protest chant for Bashir's government to "Just Fall."

Until Bashir's exit, the intelligence service had been confiscating newspapers and arrested a dozen journalists last weekend, according to Reporters Without Borders.

The Sudanese Journalists Network called  for a meeting of journalists on Friday to discuss future coverage of the protest movement and transition.

Bashir will not be extradited
2 years ago

Sudan's ousted President Omar al-Bashir will not be extradited to face the International Criminal Court.

"It would be a dark spot on our history if we extradite him," the newly-formed military council's political committee head Omar Zeinalabdin said.

Bashir is accused of war crimes for his government's attacks on civilians in Darfur, where up to 400,000 are estimated to have been killed. The ICC issued a warrant for his arrest in 2009.

Zeinalabdin said Bashir may be put on trial in Sudan.

Members of the military council, including its head Awad Ahmad ibn Auf, are also accused of war crimes in Darfur. As protesters gather on Friday to demand the army step aside, the military council appealed to the population by insisting they were on the side of the protesters and "not greedy for power".

Omar Zeinalabdin, head of the council's political committee, tried to reassure protesters that the two-year "transitional period" proposed by the army could be as short as one month if it goes "without chaos".

He also argued against suggestions the military council was close to Bashir, saying they supported the people and were not part of Omar al-Bashir's National Congress Party.

Zeinalabdin said the council would begin talks with protesters on Friday.

Protesters remain on the streets in Khartoum
2 years ago

Protesters have remained on the streets of Khartoum in defiance of a curfew imposed after Sudan's long-term leader Omar al-Bashir was overthrown in a military coup on Thursday. The AFP news agency has some photos of Friday's protests.

Sudan's President Omar al-Bashir is ousted in a military coup
2 years ago
Who is ibn Auf?
2 years ago

During his long military career, he served as the director of military intelligence and deputy commander of the armed forces. After his retirement from the army in 2010, he became a diplomat, serving as consul general in Cairo before becoming Sudan's ambassador to Oman.

In 2015, then president Omar al-Bashir appointed him as defence minister.

Six weeks ago, Bashir appointed Ibn Auf, who would subsequently topple him, as his deputy.

Ibn Auf  "remains close to his classmates at the Cairo military academy", including Sisi, research professor at Tufts University Alex de Waal wrote in the New York Times on Thursday.

Sisi came to power in a military coup in 2013 after toppling democratically elected President Mohamed Morsi.

In February, ibn Auf struck a conciliatory tone towards the anti-government protests, saying that young people protesting against the government had "reasonable ambition".

Still, that wasn't always the case, in January he rebuked the protest campaign, vowing that the armed forces would not compromise over the country's security and leaders.

The United States in 2009 sanctioned ibn Auf for his role in orchestrating war crimes in Darfur.

Last year, ibn Auf defended the deployment of Sudanese forces with the Saudi-led coalition in Yemen despite growing domestic and international criticism of the war that has caused an enormous humanitarian crisis.

"Our participation [in the conflict] is a moral duty, and there is no plan to withdraw our forces as rumoured," he said at the time, as reported by Sudanese news agency Suna.

Sudanese State TV released footage of the swearing in of Defence Minister Awad Ahmad Ibn Auf as head of the Military Transitional Council and his deputy Kamal Abdul-Marouf Al-Mah.

Both were dressed in a military outfit. A third unidentified person in non-military garb was also present.

Ibn Auf will lead Sudan for a two-year transitional period.

Curfew goes into effect yet crowds remain
2 years ago

#Sudan 🇸🇩: the nationwide curfew has gone into effect, yet in #Khartoum nobody seems to be going home tonight. pic.twitter.com/zRfXZR2UA9

US calls for 'civilian-led transition' in Sudan
2 years ago

Washington has called on the military authorities in Sudan to "allow space for civilian participation" in the government.

On Thursday, Sudanese military leaders toppled President Omar al-Bashir, after months of popular protests against his 30-year rule. The new authorities said they would set a two-year "transitional period" led by a military council.

"The Sudanese people should determine who leads them in their future," US State Department Spokesman Robert Palladino told reporters at a news briefing.

"The Sudanese people have been clear that they have been demanding a civilian-led transition. They should be allowed to do so sooner than two years from now."

Palladino called the toppling of Bashir a "historic moment for the people of Sudan", but acknowledged that Washington does not have a "final assessment" of the situation.

Asked if the US will deal with Defence Minister Awad Ahmad Ibn Auf, who is now in charge of the government in Khartoum, as the head of the executive branch in Sudan, Palladino said: "I don't have anything on specific individuals to share at this time."