Ahead of Israeli elections, threats loom over Khan al-Ahmar 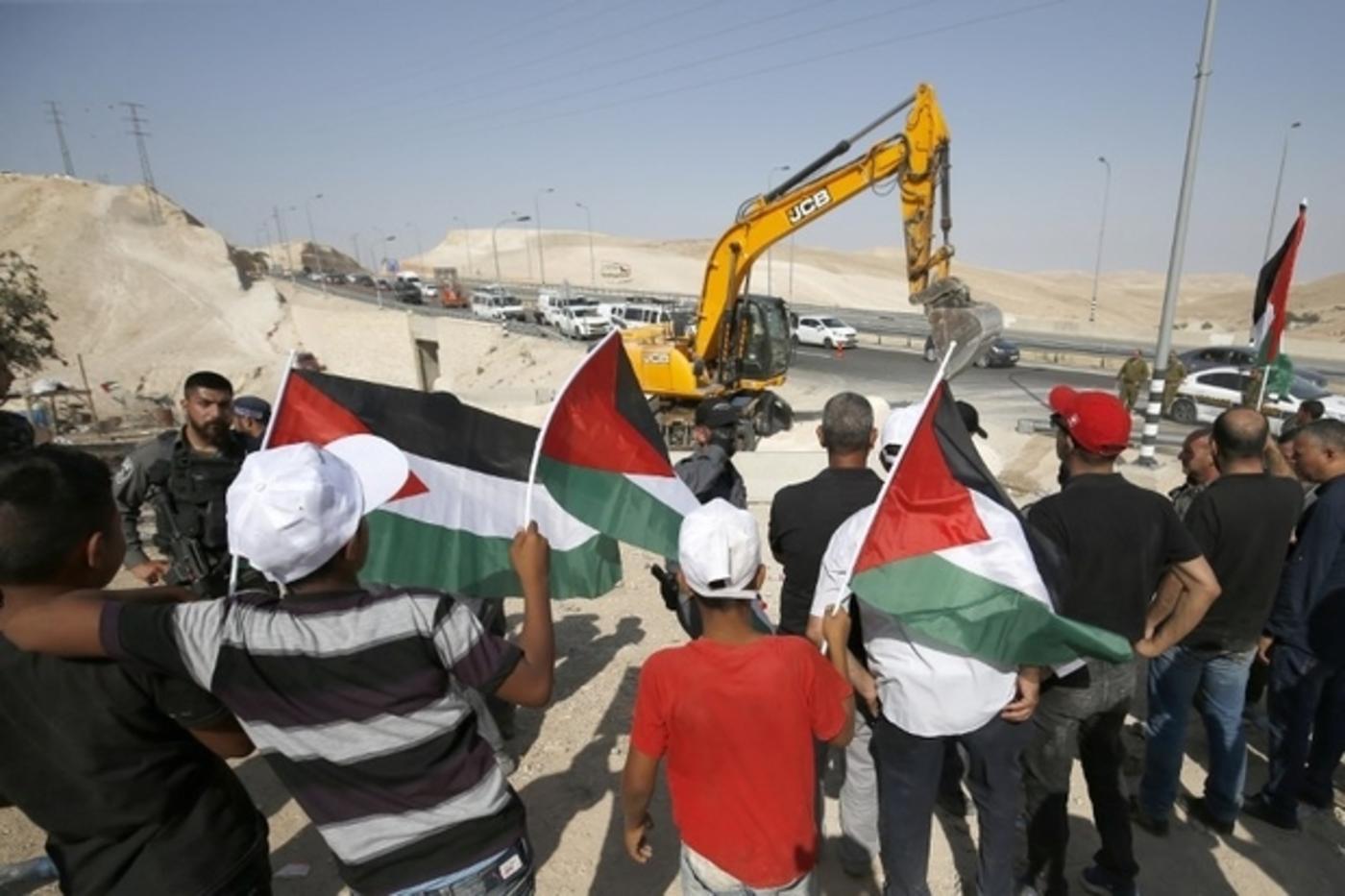 The Palestinian Bedouin village has been under threat of demolition by Israel for years (AFP)
By
Akram al-Waara
in
Bethlehem, occupied West Bank

Israeli education minister and co-founder of the “New Right” party, Naftali Bennett, has renewed calls to demolish the Palestinian Bedouin village of Khan al-Ahmar, which has been slated for demolition for years by Israeli authorities.

Israeli media reported that Bennett has called on Prime Minister Benjamin Netanyahu to see through the demolition before elections on 9 April.

He also implored Netanyahu’s administration to take a more hardline approache to demolishing the homes of alleged Palestinian attackers - a widely condemned policy that Netanyahu has already fast-tracked in recent months.

The residents of Khan al-Ahmar are from the Jahalin tribe, a Bedouin family expelled from the Naqab desert - also referred to as the Negev - during the 1948 Arab-Israeli war.

The Jahalin then settled on the eastern slopes of Jerusalem in what is now Khan al-Ahmar. The small village of 180 residents is located in the central occupied West Bank near Route 1, which connects occupied East Jerusalem to the Jordan Valley. 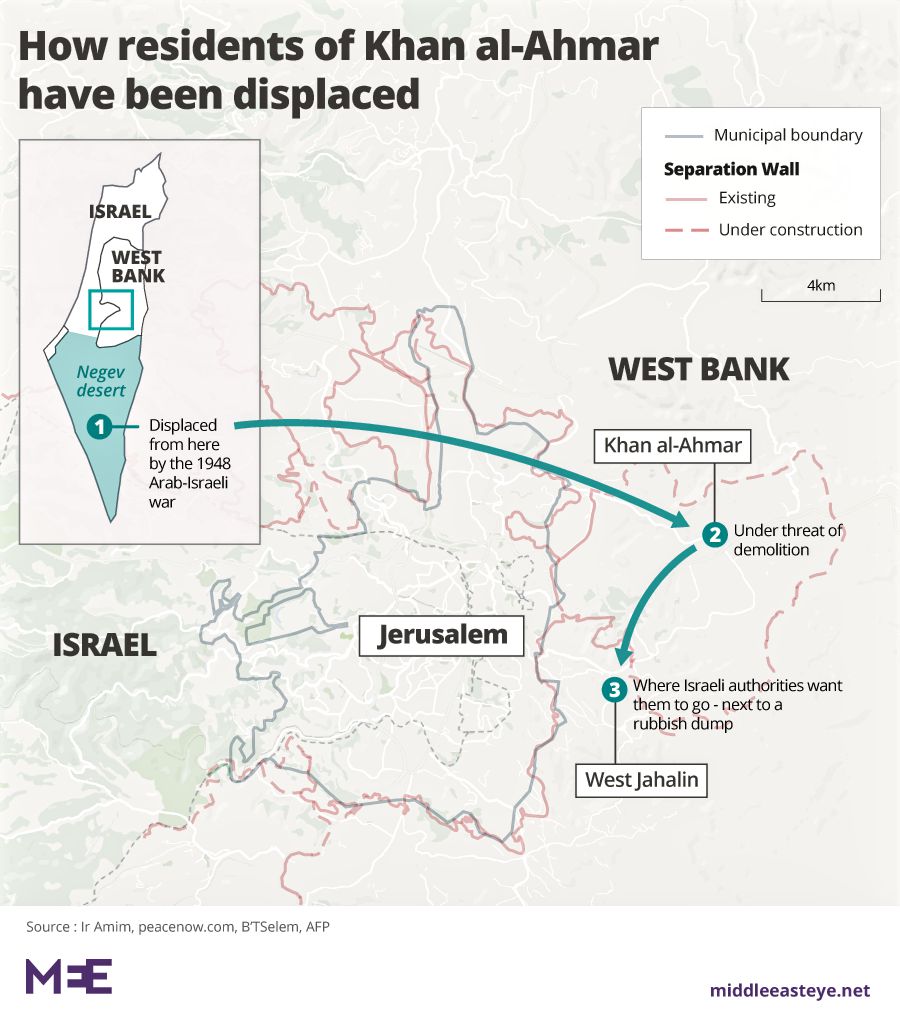 Israel intends to demolish the village as part of the so-called E1 plan, which involves building hundreds of settlement units to link the nearby settlements of Kfar Adumim and Maale Adumim with East Jerusalem in the Israeli-controlled Area C of the West Bank.

Bennett’s recent statements came as no surprise to those active in the fight to save Khan al-Ahmar from demolition, with many criticising them as nothing more than a play for political points as the Israeli election cycle heats up.

“This is not the first time Bennett has called for the immediate demolition of the village,” Abdullah Abu Rahma, 48, of the Palestinian National Committee Against the Wall and Settlements told Middle East Eye.

“Even Netanyahu has acknowledged that it would be great for his reelection if he did so,” Abu Rahma said, pointing to a statement Netanyahu made last month to journalists that the demolition of Khan al-Ahmar “will surely help” his electoral chances.

Despite just one month left until elections, and no apparent steps on the ground to renew demolition efforts, Abu Rahma told MEE that activists and residents of the village are taking the threats seriously.

- Abdullah Abu Rahma, member of the Palestinian National Committee Against the Wall and Settlements

“These threats are not just empty words, we believe it could translate into real action - especially as we draw closer to the elections and Netanyahu faces more pressure,” he said.

“Israeli politicians use their violations of Palestinian rights as advertisement for their campaigns,” he continued.

“Who can kill the most, take the most land, build the most settlements, demolish the most homes? This is what they want to know. Whoever can hurt Palestinians more has a higher chance of winning in Israeli society and getting more seats in the Knesset.

“The opinion of settlers is extremely important for the right-wing base of these politicians,” Abu Rahma continued. “So destroying Khan al-Ahmar will please them [settlers] and motivate them to vote in your favour in the election.”

Tawfiq Jabareen, the lawyer representing the residents of Khan al-Ahmar, echoed Abu Rahma’s sentiments to MEE, saying there is a real possibility that such threats could turn into reality due to increasing pressure on Netanyahu’s campaign.

Last week, Israel’s attorney general decided to indict Netanyahu over three separate corruption cases in a move that could severely hamper his chances of re-election.

“He has the most to gain from such a move, which could distract from the scandals he’s facing and please his base at the same time,” Jabareen told MEE.

Jabareen told MEE that he is not aware of any concrete developments taking place towards demolishing Khan al-Ahmar, before adding that there isn’t much he and the legal team could do if Netanyahu does move forward with the plans.

“As lawyers, we can’t do anything right now. These issues are bigger than the court and legal system, it’s a national political decision,” he said.

“The most we can do right now is put pressure on politicians and leaders to not make these decisions.”

As for the residents of Khan al-Ahmar, they say they are prepared to resist another campaign to destroy their homes, as they have done countless times before.

“Bennett, Netanyahu, all of these politicians can say what they want, but we aren’t going anywhere,” Mohammed Abu Dahouq, 50, a resident of the village told MEE.

“They have threatened a thousand times to destroy our village, but we have resisted every time. Leaving here is not an option,” he said.

“His threats of course make us worried because they are the ones with the power,” Abu Dahouq said. “But we will use the support of the international community as we have done before, and we will fight against their attempts to erase us and replace us with settlers.”