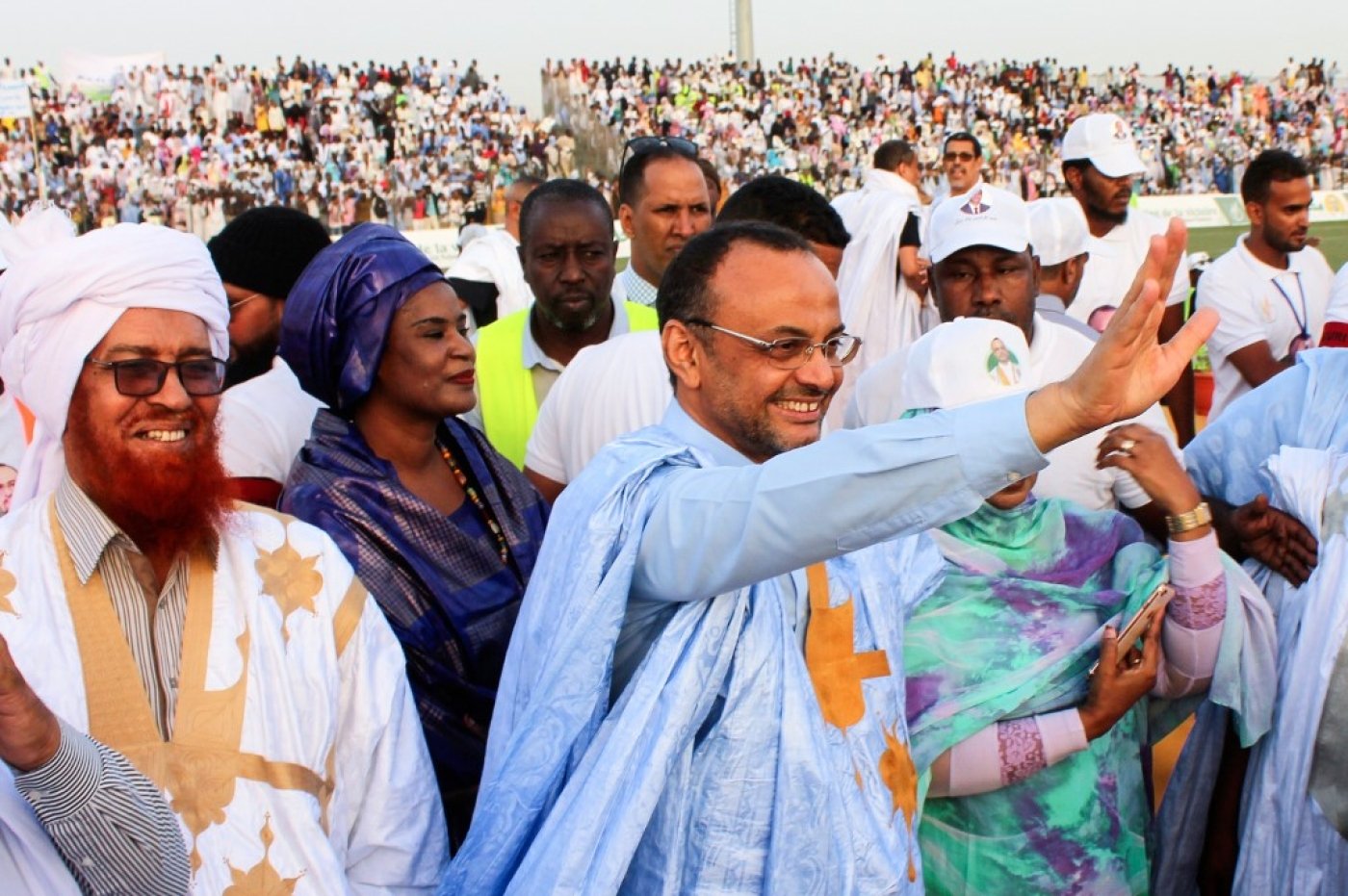 White pick-up trucks arrive to a fanfare of cars blaring their horns outside the Nouakchott headquarters of presidential hopeful Sidi Mohamed Ould Boubacar in Mauritania.

Cavorting supporters wear T-shirts bearing his image and use loudspeakers to amplify chants in his name.

Others are seated on chairs spread out across the wide pavement, watching a giant projection of Boubacar giving a speech.

Much of Mauritania’s capital is dominated by images of establishment candidate Mohammad Ghazouani. Some of his pictures hang from the tops of tall buildings and others are plastered at the entrance of mock Bedouin tents that line Avenue Moktar Ould Daddah, a major thoroughfare.

Boubacar’s supporters fear that Ghazouani will follow in the footsteps of his close political ally President Mohamed Ould Abdul Aziz, who is stepping down after two terms in office.

Abdul Aziz’s crackdown on the Muslim Brotherhood and affiliated organisations in the country have left their supporters both hopeful that the tide will turn in their favour - and fearful of what may come next if the outgoing president’s allies stay in power.

“We want things to change. There’s no education and nothing to eat or drink,” one woman who wished to remain anonymous tells Middle East Eye.

“We need new people,” says another supporter, Mohammad Lamine, 32, as he gently unwinds the white turban covering much of his face. “There’s too much racism and corruption. Abdul Aziz and Ghazouani are the same.”

As with others here, Lamine is a member of Tawassul, the largest opposition party in Mauritania and an offshoot of the Muslim Brotherhood. Tawassul backs Boubacar.

Past Mauritanian governments, including that of Abdul Aziz, have targeted organisations with Tawassul links.

Subsequent to the forced closures of charities, some fear a Ghazouani win would see this trend continue.

After Abdul Aziz sided with Saudi Arabia and the UAE in their spat against Brotherhood-backer Qatar, fears mounted in September that he might ban Tawassul outright after he won a powerful mandate in parliamentary elections.

They try to convey an image as democrats and they have the Islamist message and say that Mauritania needs to be a more Islamic society.

Suggesting they had the potential to commit violent acts in a country that has faced an al-Qaeda insurgency, Abdul Aziz said last year: “Islamists who practise politics and wear ties can take up arms if they cannot achieve their goals via politics.”

The political Islam movement in Mauritania has already faced major crackdowns in the country in 1994 and 2003, before Tawassul was able to gain legal recognition as a party in 2007.

But the party soon won widespread support, mobilising the masses during Israel’s 2008 war on Gaza against a decision taken a decade earlier by the Mauritanian government to recognise Israel.

“He’s strongly moved to try and take the wind out of their sails.”

Peaking at the 2013 parliamentary elections, when they won 16 out to the 146 seats, Tawassul dropped down to 14 seats in September’s vote, compared with 97 for the Abdul Aziz-aligned Union for the Republic.

Yet, despite the underwhelming result, Tawassul still remains the largest opposition party in the country.

“They try to convey an image as democrats and they have the Islamist message and say that Mauritania needs to be a more Islamic society,” said Thurston, who spoke to Middle East Eye from neighbouring Mali.

One way Tawassul has worked on their public image, Thurston said, is by reaching out to Mauritania’s various communities.

“Their strategy is to have a multiracial appeal. They’ve done a lot to be inclusive.”

While Berbers have dominated the country since it won independence from France in 1960, they make up just 30 percent of the country’s population.

Another 25 percent belong to various Black African tribes also found in neighbouring Senegal. But the largest group are the Harratin, who are a legacy of the enslavement of Black Africans by the dominant Arab-Berbers. They amount to about 40 percent. Tawassul has thrown its weight behind Boubacar, a veteran politician who served two terms as prime minister from 1992 to 1996 and again between 2005 and 2007 and is a former ambassador to France and Egypt.

He has promised to reopen Tawassul-linked organisations shut under Abdul Aziz.

In a room on the top floor of the hotel that serves as his headquarters, Boubacar spokesman Ismail Cheikh Sidiya sits at the head of a long table, wearing a thick white boubou (long, loose-fitting garment) and a black scarf around his neck.

“Mauritanian voters will vote for Boubacar because he is the unifying candidate. He is a product of the middle class, the son of a civil servant and a state employee,” he said.

“If we alleviate poverty and the cost of basic needs such as electricity, water and housing, we will be able to create a tranquil society. When a citizen is hungry or unemployed, he does not think about his neighbour before he thinks of himself.”

Many families from the Black African communities or from the Haratins can only afford to send their children to public schools, which are understaffed and overcrowded.

On the far end of the long meeting table at which Sidiya sits, a diverse array of supporters, including women wearing brightly coloured Melehfa, a long shawl that is wrapped around the body from head to toe, quietly listen.

“We’re taking a special interest in girls' education and the creation of facilities that take into consideration the privacy of the Mauritanian girl,” he added.

Sidiya acknowledged the importance of Boubacar’s relationship with Tawassul in boosting his popularity in the election.

“If it were not for Tawassul, we would not have been able to have this campaign, because it is the largest opposition party.”

“Anything that harms the dignity of Tawassul is a stab in the back for all Mauritanians,” he adds.