Though weakened by regular military losses, Algeria's armed Islamist groups are waiting to take advantage of any future political instability 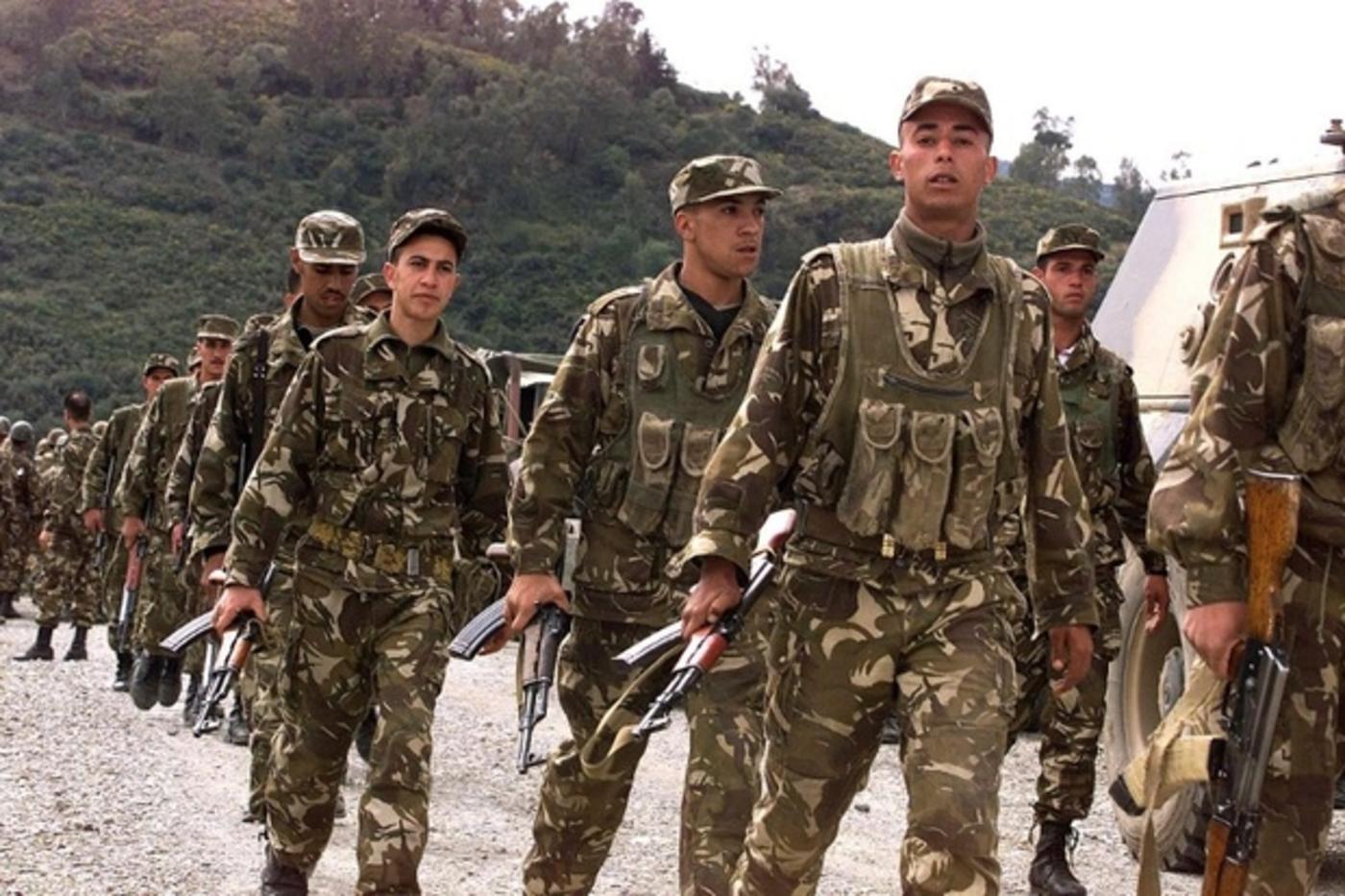 ALGIERS – In a new blow for the Islamic State (IS) group in Algeria, the Ministry of Defence last Sunday announced that it had killed "two dangerous terrorists," one of whom led a local affiliate in the country.

Noureddine Laouira, aka Naoura aka Abu al-Hammam – not to be confused with Yahia Abou al-Hammam, the emir of al-Qaeda in the Islamic Maghreb (AQIM) in the Sahel – was the leader of the el-Ghoraba (Constantine and its surroundings) militia, which affiliated itself to IS after splitting from AQIM in July 2015.

Originally centred in Faubourg Lamy, a working-class neighbourhood in Constantine, IS has benefited from the eradication of the area's shanty town and the exodus of its population towards the new town of Ali Mendjeli, about 15 km out of Constantine, an inland city in northeast Algeria, where the group has now also began to extend its influence.

According to information collected by Middle East Eye, both men killed at the weekend were previously identified and followed because of intelligence received by the Algerian security forces.

These forces preferred to wait until the militants were isolated in the Djebel El Ouahch district, which overlooks the town of Constantine, so as to minimise any collateral damage or risk of escape.

The authorities claim to have found on Abu al-Hammam the exact weapon, a Beretta 92, which was used to shoot Amar Boukaabour, a policeman killed by three gunshots in October in Constantine, a shooting later claimed by IS.

"The murder was attributed to Abu al-Hammam, who is suspected of also having plotted the aborted attack against the Constantine police station on 26 February, claimed by IS. Even if the suicide bomber came from Jijel [which is outside the IS base in Constantine], it is known that the el-Ghoraba militia organised the plot,” an Algerian security source told MEE.

Despite its notorious beginnings – with the kidnapping and killing of French hiker Herve Gourdel in September 2014 and the defection of a number of leading figures from AQIM – IS has not managed to develop its Wilaya al-Djazair (or Algeria province) - the name given by IS to all of its dormant urban cells and active armed divisions in the Algerian hills.

According to security sources, its current manpower is estimated to be just 80 men, spread across three groups.

"In the east, there is the el-Ghoraba militia [in the Constantine area], and the al-Itissam militia [in the Skikda area], also known under its new name of Ansar al-Khilafa. Alone, these two count around 50 or so men." There are also "former soldiers from the GIA [an armed organisation from the 1990s], whose role is mostly linked to coordination and logistics," a military source said.

The Ansar al-Khilafa group emerged from the Katiba of Shuhada (martyrs) of AQIM. The Katiba of Shuhada had settled in the difficult-to-reach and wooded region around Skikda, on the Gulf of Stora, northeast of Constantine, at the beginning of the 2000s. It followed the decision by many Skikda, Jijel and Berber groups to abandon militancy for the Peace and National Reconciliation Charter, which provided amnesty for all armed Islamist fighters who chose to give up fighting.

This group, which is still active, is reportedly led by Amar Lemloum, aka Zakaria al-Djidjeli. Since the summer of 2015, the army has put pressure on the region by deploying over 4,000 men, in operations which have seen many killed.

"At the centre, in the triangle of Bouira-Boumerdes-Bejaia [Kabylie], was the group named Jund al-Khilafa [Caliphate Soldiers]. Since its presumed leader, Othmane al-Acimi, was killed in May 2015, the identity of its emir is unknown," the military source said.

"We do not know who the emir is who leads all of the groups. The name of Abu al-Hammam has been put forward, but we know this is not the case."

Losses which are not compensated for by recruitment

It is considered unlikely Abu al-Hammam had been the overall IS leader in Algeria, firstly because he only became a militant in 2008 and had previously been only a junior member of AQIM.

"He is therefore considered as 'new' and cannot, in this capacity, claim such a responsibility," said the military source.

"A further clue lies in the fact that he was killed when travelling with his deputy. However, if he was emir, there would be at least four or five militants around him," the source said.

The emir of the Wilaya al-Djazair also does not, according to him, personally take part in any direct action in the city, such as that of the assassination of the policeman in Constantine.

"Finally, the most influential group affiliated to IS is that of Jund al-Khilafa, as shown by the most significant operations led by the Algerian army since 2014 in the Bibans mountain range. In an operation in February, to the northeast of Boura, 14 terrorists and nine soldiers were killed. It is therefore impossible that, whilst the largest force of IS is in this area, the emir would be located in Constantine" - around 300km to the east.

'It should not be forgotten that for a terrorist, the greatest victory is that of staying alive'

With an average of 200 men across all groups killed each year by the army, armed groups in Algeria are today facing major difficulties, suffering losses for which new recruitment cannot compensate.

This is to such an extent that, according to an Algerian security source contacted by MEE, local IS leaders had asked for men from cells in Tunisia and Libya to join.

"If we look closely at the profile of terrorists eliminated in recent years, we can note that they joined the militancy before 2010," a leading figure in the fight against militancy told MEE.

"This shows that they are struggling to recruit. Algerians are either eliminated during military operations, or they want to benefit from the Charter for Peace and National Reconciliation. This is why newcomers are primarily foreigners from Mali, Morocco, Niger, Tunisia and Libya."

However, this optimism is not shared in the intelligence services.

"It is true that they have been weakened and, for some, extremely isolated. However, it should not be forgotten that for a terrorist, the greatest victory is to remain alive," one anti-terror expert said.

"They know that they have everything to gain in staying hidden whilst awaiting a more favourable situation, such as for instance political instability. In this instance, overnight, they can once more recruit and become operational. Complete eradication is impossible and this is where the risk lies."

AQIM have the advantage over IS

Meanwhile, the emir of AQIM seems to have had a lot more success than his IS counterparts.

Abdelmalek Droukdel, who is almost 50 years old, had become very isolated over the years. From the mountains of Kabylie in the north of the country, where he is presumed to be hiding, he has seen his organisation develop over the years, and steadily gained influence in the Sahel region, although his original central ground has weakened.

He remained a spectator of the most recent significant last movement when the merger was announced in a video by the group led by Mokhtar Belmokhtar (al-Mourabitoune) with the group led by the Malian Touareg Iyad Ag-Ghali (Ansar Dine) and that of Djamel Okacha, aka Yahia Abou al-Hammam (Emirate of Sahara, a branch of AQIM).

The new movement, called "Islam and Muslim Support Group," has sworn allegiance to Ayman al-Zawahiri, the present leader of al-Qaeda. "Emails have been intercepted by the Western security services in November and December 2016 between Ayman al-Zawahiri, Iyad ag-Ghali and Djamel Okacha," said an Algerian security source.

"The Emir of al-Qaeda asked the jihadist chiefs in northern Mali to unite under the same commander in order to present the activities in northern Mali as a legitimate resistance against the French occupation," he said.

In a statement on Saturday, the group claimed responsibility for an attack on 29 March that killed three members of Mali's security forces near the border with Burkina Faso.

The attack was the second operation claimed by the group after it said it had been responsible for killing 11 soldiers in the same area on 5 March.

While AQIM has also lost a lot of men, according to the intelligence services, the organisation still has around 500 members. Above all, it has shown, over time, a remarkable ability to adapt.

"It has faced the desertion of a large portion of its directors to IS" but "it has rectified its fighting and communication tactics so as to minimise its losses," a military source said.

"AQIM's advantage over IS, beyond the number of people, is that it has vast knowledge of the field and expertise related to its number of years in terrorism. And, above all, it has the best casemates [shelters] to hide."

Confronted with this, Islamic State is seeking to survive while awaiting a possible return of IS fighters from Syria or Libya.

"The expression 'residual terrorism' used by the authorities is realistic. However, in the case of IS as in that of AQIM, it is important not to underestimate the threat," the expert said. "Overnight, in a favourable context, they could regenerate."