ANALYSIS: In Tunisia, progress and uncertainty five years on

Five years after Ben Ali’s overthrow, Tunisia is a regional success story, but significant challenges remain to its fragile achievements When Zine El Abidine Ben Ali was forced by a popular uprising to flee Tunisia and go into exile in Saudi Arabia five years ago, many of the biggest names in Tunisian politics today were in relative obscurity – some were in jail.

In contrast to Egypt, Yemen, Libya and Syria, there's no denying that Tunisia has made progress since its 2011 uprising. The country now has meaningful elections, a semi-functioning party system and a constitution born of debate and compromise between the elite political blocks.

Tunisians may be the only Arab spring participants who can credibly claim to have carried out a revolution, but serious problems remain that threaten all of the tentative successes.

Five years on, a state of emergency has been re-declared, faces from the Ben Ali era have re-emerged in positions of authority, militants have staged mass casualty attacks in the capital and border regions alike, the security services remain unreformed and repressive, and the country's ruling political block is at risk of implosion.

In 2014, Tunisia held parliamentary elections that were won comfortably by Nidaa Tounes, a broad-church political party of the wealthy, urban, centre-left, and secular. In the presidential elections later that year, the head of Nidaa Tounes, Beji Caid Essebsi, was elected fourth president of the republic. Nidaa's main rival, the Islamist Ennahda movement, chose not to field a candidate.

But some critics say Essebsi has refused to respect the constitutional rules that restrict the presidency's power, and that his recent interventions in the internal politics of Nidaa Tounes, as well as a perceived promotion of his son Hafedh Essebsi's interests, is of grave concern.

“According to the constitution that we fought for and passed, President Essebsi is not allowed to interfere in party politics – he is supposed to be non-partisan,” said Amira Yahyaoui, the founder of the independent Tunisian NGO Al-Bawsala.

Essebsi is widely believed to have used his influence to forego a democratic vote on the position of executive director of Nidaa Tounes, and to have successfully supported his son's accession to the role.

“I can understand a father of 89 years who wants to give something to his son, but to infringe on the constitution in this way is very serious,” Yahyaoui told MEE. “We know what this means, we've seen it before. Just five years ago, we had the same thing with Ben Ali using the presidency in the interests of his family and party.”

Many Tunisians, said Yahyaoui, are still in a state of denial about the president's actions, which she argues constitute violations of the constitution in the interests of nepotism.

“I never had any illusions about the president, but even I am shocked by this. At this point we have to say that the first threat to democracy in Tunisia is the president.”

Some within Nidaa Tounes share this view, and cracks have emerged within the movement which was always a polychromatic group to begin with.

On one side is Hafedh Essebsi, the son of the president, and on the other the former secretary general of the party, Mohsen Marzouk, who says the Essebsi family has dynastic designs for Tunisia and that Nidaa has been too tolerant of Ennahda's influence. By last November, the two factions had literally come to blows.

It's difficult for Essebsi – who was a major fixture of the old government both under Ben Ali and his predecessor Habib Bourguiba – to portray himself as a revolutionary. He served as the country’s interior minister in the 1960s and, during his election campaign, employed advisers with ties to Ben Ali’s government.

On 8 November, a group of 32 Nidaa Tounes MPs, led by Marzouk, announced their intention to resign from the party, threatening its majority in parliament. On 8 January, 16 Nidaa Tounes MPs resigned and Marzouk declared that he would found an alternative political party of his own. Nidaa Tounes looked to be finished.

“The usual constituency were upset because of the rapprochement with Ennahda and a perceived lack of adherence to election promises,” said Yousef Cherif, a political analyst based in Tunis.

The following day, the party held a special congress in the city of Sousse, the site of a mass shooting at a tourist resort by militants in June 2015 that claimed the lives of 38 people. Beji Caid Essebsi opened the conference, and his son Hafedh was appointed legal representative and secretary general of the party’s central committee.

Mohsen Marzouk did not attend, instead holding his own conference the following day. At the conference, many of those who were planning to jump ship appear to have been persuaded against doing so and Nidaa looked to have consolidated.

But on Wednesday, Minister of Health Said Aidi and Social Affairs Minister Mahmoud Ben Romdhane, both of whom were founders of Nidaa Tounes, resigned from the party. The two joined 11 other lawmakers who left the party earlier this week, some of whom reportedly said they were spooked by Hafedh Essebsi’s appointments at the Nidaa congress.

“At present, it looks as though the party will continue, complete with its old skeleton, which means Marzouk is not as strong as we once thought,” Cherif told Middle East Eye.

Marzouk has always been seen by his opponents within Nidaa as an ambitious man, and some say his quarrel with the Essebsi family had as much to do with a desire to take the leadership than any ideological or principled position.

“Hafedh Essebsi is becoming more and more prominent and this does raise questions,” said the analyst, “but we should remember that he is not likely to be a Gamal Mubarak – he is already an old man.”

Enter - or not - Ennahda

The surprise speaker at Nidaa's special congress was Rached Ghannouchi, no less a person than the head of Nidaa's main rival party, Ennahda. Although Ghannouchi was greeted with somewhat lacklustre applause, by the end of his speech, he had won over enough of the room to have brought a clear majority of hands together.

On the surface, Nidaa's troubles ought to have been a blessing for Ennahda. Their only serious rival for political power was in disarray, presenting them with an opportunity to move forward and capitalise politically. But Ennahda refrained from attacking Nidaa Tounes, drawing attention to the disunity, or otherwise seizing the moment.

Ennahda's experience in government in 2012 and 2013 may have made the party's leadership wary of taking on too prominent a role.

When the security situation deteriorated during its time as the largest and most influential party in the post-uprising troika government, Ennahda found itself being accused of harbouring and abetting militant elements that were responsible for the assassination of two popular left-wing politicians.

These concerns, in the context of perhaps an even more uncertain security environment, doubtless played a part in the party's decision not to run for the presidency, and to refrain from punishing Nidaa Tounes when the party was at its weakest.

The party says its main interest is in a balanced, fair and stable political environment.

“The Ennahda Party believes Tunisia needs a stable political situation and a stable government in order to make the necessary political and economic reforms that were at the heart of the revolution,” said Yusra Ghannouchi, a senior spokesperson for Ennahda.

“This requires stable and strong political actors and that's what we wish for all parties, both in government and in opposition, and more so for the principal political parties in the country,” she told MEE.

Ennahda has refused to charge back to the front row, preferring to concentrate on remaining a strong political actor, but in opposition.

If Nidaa Tounes is able to consolidate, and particularly if the more exclusionary elements of the party are sidelined, Ennahda will count itself in a better position – able to exercise great influence but without the risks of taking the reins.

While the political class is focused on appointments and party politics, the state – and state security forces – have been preoccupied by the fight against a militant insurgency based around the Jebel Chaambi mountains on the border with Algeria and attacks in urban centres by Islamic State (IS) sympathisers.

Following two high-profile attacks on tourist resorts, on 25 November IS claimed responsibility for the bombing a day before of a bus carrying a troop of presidential guards on the central Avenue Mohamed V in Tunis that left 12 dead.

The attack shocked the public and the state has the backing of a significant section of society for taking on the militants with force. However, the state of emergency, and the powers it entails for the security services, have been applied to more than just militants.

A severe crackdown by police, interior ministry personnel and the domestic intelligence agencies has seen other constituencies targeted. The LGBT community has come under increased pressure, there have been random arrests and the harassment of political and labour activists, the press, artists and dissidents.

Even before the state of emergency, there were troubling developments in the security services' treatment of civilians. In August, five men who were recently released from prison filed complaints with the state alleging that they were tortured by counter-terrorism police. When they formally submitted the charges, they were re-arrested on the spot.

“These past months were the worst for the past five years, especially for minorities,” Yahyaoui said. “We have a state that is arresting artists, arresting young activists, anyone who is not in line with the old conservative ways.”

“Too little has been done to reform the security forces and hold those responsible for such acts to account,” said Said Boumedouha, Amnesty International’s deputy director for the Middle East and North Africa.

“While it is understandable that security is a priority for the government in light of the bloody attacks that have shaken Tunisia in the past 12 months, it cannot be used as a pretext for a U-turn on the modest human rights progress achieved since the uprising.”

On 22 December, Essebsi issued a decree extending the state of emergency for a further two months.

Outside of Tunisia there has been much triumphalism, driven by the comparatively disastrous events in the country's neighbours since 2011, but Tunisia's Arab Spring success story image looks rather different under serious scrutiny. 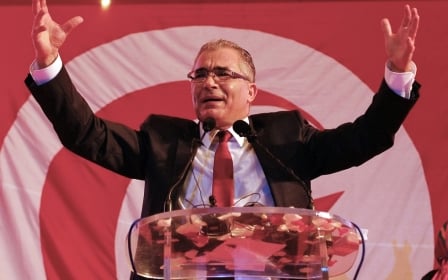 Tunisia
Why are so many Tunisians joining IS? 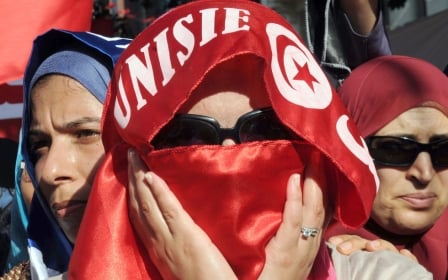