'Another Madaya': Women in Syria's Daraya warn of mass starvation

In open letter, 47 women from besieged town say they have had no UN aid and fear children and relatives will soon starve to death With a population of 8,000 and situated within a few miles of aid warehouses, Daraya still hasn't received UN food aid (LCC Daraya/Facebook)
By
Dania Akkad

Women in Daraya, a Syrian town besieged for more than three years by government forces, warn in an open letter that they are “on the verge of witnessing” their children and relatives starve to death if aid does not reach them soon.

“We are writing to you with an urgent call to save our town,” said the open letter, signed by 47 women, including several whom had not eaten in at least two days. “We’re appealing to all who see this, near and far: We need immediate assistance.”

With a population of 8,000 and within a few miles of aid warehouses, Daraya has never received UN food aid, “not one crumb”, US Ambassador to the UN Samantha Power said this week.

They are among at least 486,700 Syrians who the UN said in its latest report are currently under siege. Siege Watch, an independent monitoring network, said that figure is more than a million, while the NGO Doctors Without Borders (MSF) puts it at almost 2 million.

Although opposition groups, including the Islamic State, hold some blockaded areas, the majority of the sieges are enforced by forces loyal to the Syrian government.

Since November 2012, residents of Daraya – known from the start of the uprisings for their peaceful resistance to the Syrian government – have survived off food smuggled from the nearby town of Moadamiyet al-Sham, also besieged since 2012, and whatever crops they could grow.

When the government cut off the town's water two years ago, locals siphoned what they could from shallow wells, said Lubna Al-Kanawati, a programme manager for Syrian NGO Women Now For Development which runs six centres inside Syria, including one in Daraya.

But in January, the road between Daraya and Moadamiyet al-Sham was cut off and frequent government bombing has left the town’s drinking water and farmland contaminated with toxic chemicals, according to locals.

Unlike some besieged areas in Syria that have received aid during a cessation of hostilities in the country's five-year war, Daraya is one of six areas to which the Syrian government has continued to block UN access, affecting more than 250,000 civilians, according to the latest UN report last month.

“The only thing sustaining the city was its agricultural land,” Sawsan Al-Abaar, one of the signatories of the letter, told Middle East Eye by Skype from Daraya on Wednesday. “All this means we are lacking the most basic needs for life.”

Unlike some of the signatories to the letter, Abaar said she ate on Wednesday – she had a soup made from grass, a regular meal in the town where the women’s letter said there is no longer baby formula or breast milk as a result of malnutrition. Table salt, they said, is in short supply.

“Even something as simple but as necessary as dishwashing liquid is unavailable,” the letter said. “There are no cleaning supplies in order for us to ensure hygiene and keep diseases away.”

Abaar, who runs Women Now for Development's centre in Daraya, said a range of chronic conditions including constipation, scabies and kidney stones have become widespread among residents, as one remaining field hospital without electricity serves the population.

“Because of malnutrition and lack of healthcare, I lost my daughter while she was still in the womb, in the sixth month,” she said. “I suffered a great deal, and had to have the stillborn baby taken out in an operation.”

The open letter comes three months after the Syrian town of Madaya made global headlines after at least 28 residents starved to death as Syrian government forces and Hezbollah fighters besieged the town for six months.

With Madaya in the spotlight and media attention on the hundreds of thousands of Syrians under siege, there was a sense that there was enough international attention to bring resolution to the problem.

On 12 February in Munich, when world powers agreed to a “cessation of hostilities” in Syria, US Secretary of State John Kerry said the parties had agreed to “accelerate and expand the delivery of humanitarian aid beginning immediately”.

But after an increase of aid convoys to besieged Syrian areas in February, the UN Security Council heard during a closed-door meeting on Tuesday that UN aid had reached fewer starving Syrians – 21 percent of the total - in March.

“I will not hide that we are afraid now to lose some of the momentum that we got after the Munich meeting,” Jan Egeland, special adviser to the UN Special Envoy to Syria, told reporters last week.

In Madaya, residents have continued to suffer from severe malnutrition despite aid deliveries. On Monday, 18-year-old Mohamad Shaban was the latest resident to die of starvation.

Last week, three children in the town bled to death after playing with a bomb that exploded, Egeland said.

“They were gravely wounded but they didn’t die,” he said. “They died because medical evacuation was not allowed and [im]possible to organise.”

Less than an hour’s drive away, said Kanawati, the NGO aid worker who spent time in Daraya, there is “another Madaya”, and frustration is growing that the world has forgotten besieged Syrians.

“They feel like they are forgotten and they don’t know why,” she said of the residents in Daraya. “There is no reaction, no feedback from the whole world, just silence and we don’t know why.”

As peace talks between the Syrian opposition and government are set to resume later this week, Kanawati – who lived under siege for more than two years but now works outside of Syria - said the sense that she and others are hearing from Geneva, where the talks are to be held, is that a solution for places like Daraya will not come swiftly enough.

“That makes us want to push forward to do something because people are really suffering,” she said. “We want to make a move before we see video of these people dying from hunger.”

Abaar said she and other women – many of whom, she said, have lost the breadwinners in their families - are protesting because they “no longer have the patience to be silent”.

“We are seeing our children starting to look like skeletons, our one-year-old babies like three-month olds,” she said. “We are counting on the conscience of the world to help.” 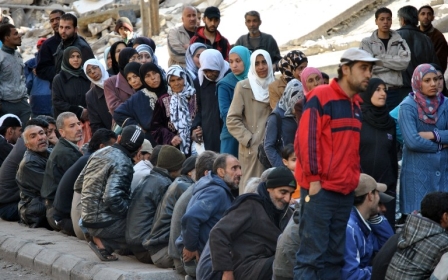