Father Hovhannes said he intended to remain at Dadivank. Azerbaijan has said religious sites will be protected (Reuters)
By
Peter Oborne
, Jan-Peter Westad

“Whatever happens I am going to stay,” said Father Hovhannes, the priest at the ancient monastery of Dadivank.

His monastery, built from the ninth century, stands above the road between the Armenian capital Yerevan and Stepanakert, the main city - known as Khankendi by Azerbaijanis - in the disputed region of Nagorno-Karabakh.

The area surrounding the monastery, Kalbajar, had been due to pass into Azerbaijan's control on Sunday, following last week’s ceasefire. The agreement brought to an end to a bloody and one-sided 44-day conflict in which Azerbaijan had recaptured much of the territory it lost to Armenian forces in an earlier war in the early 1990s.

However, an extension - granted on the day of the deadline and mediated by Russian President Vladimir Putin - has given Armenians considered by Azerbaijan to be living in Kalbajar illegally until 25 November to vacate the area.

Nagorno-Karabkah, which Armenians call Artsakh, is internationally recognised as part of Azerbaijan but most of its population, particularly in towns and cities, are ethnic Armenians. Azerbaijianis however once made up a majority in provincial areas such as Kalbajar before being expelled by Armenian authorities in the 1990s.

The Armenian government in Yerevan also backed settlement policies which encouraged ethnic Armenians to relocate to the region.

Over the past few days, thousands of Armenians have made long and often difficult journeys to this symbol of Armenian Christianity and culture before the ceasefire agreement takes formal effect and the area returns to Azerbaijan’s control.

When we arrived there was confusion over the future of this monastery. A passionate argument was in progress over whether or not to take away the cross stones and other sacred artefacts central to Armenian Christianity and national identity.

One man, Razmik Karapetyan, said the monastery was at “panic stations”. He added: “We are here to stay until the end. This is our God. It’s our church. Our cross bears a heavy weight. We are here to carry that weight.”

Karapetyan had been a volunteer soldier during the war and told us that he and his fellow fighters had frustrated three attacks from Azerbaijani forces.

Like Father Hovhannes, Karapetyan said he planned to stay at the monastery even when the area is under Azerbaijani control.

The office of Azerbaijani President Ilham Aliyev said on Saturday following a phone call with Putin that Christian sites in areas returning to Baku's control would be “properly protected by the state”.

“President Ilham Aliyev noted that Azerbaijan is a multinational and multi-confessional country, where the rights and freedoms of all peoples and representatives of all religions are fully guaranteed,” the statement said.

“Christians living in Azerbaijan will be able to make use of these temples.”

By Sunday, Russian peacekeepers had been deployed to the monastery, in accordance with the terms of the ceasefire deal.

Still, the prevailing mood at Dadivank was one of grief and loss. Men and women were weeping and hugging each other. Worshippers were taking photographs of the monasteries buildings, while two artists were making clay prints of ancient inscriptions.

One of the artists, Anush Ghukasyan, said: “At the start we were too emotional to begin our work. Today there is all this noise. Next week there will be silence.”

The road below the monastery meanwhile was busy with cars and trucks full of belongings heading towards Yerevan.

Flocks of sheep and herds of cattle, also heading out of Nagorno-Karabakh, held up traffic. We passed two burning houses, which we were told were being destroyed by Armenian owners determined not to leave the properties to Azerbaijan.

All day and well into the night, men were cutting down trees for firewood. Before the war, tree-felling was regulated by the authorities. But with the prospect of a cold winter ahead, locals were taking advantage of the political vacuum to stockpile wood which could be sold.

In Stepanakert, the region's administrative capital, we spoke briefly with Arayik Harutyunyan, the president of the Republic of Artsakh, the separatist government recognised only by Armenia.

Wearing a military jumper, he was a man with the weight of the world on his shoulders and gave short answers to our questions.

MEE asked him whether had been consulted in advance of the ceasefire. He replied: “I was not just consulted, but I recommended it.” He explained that in the face of Azerbaijan’s superior military capabilities, they could not defend their villages, nor Stepanakert.

MEE then asked whether Armenians could feel secure following the peace deal. He said: “We are trying to solve the uncertainty but things are not clear yet. The deployment of Russian peacekeepers is crucial.”

Armenia on Saturday said that more than 2,300 fighters had been killed in the six-week conflict, while Putin on Friday said that 4,000 people had died and tens of thousands had fled their homes. Azerbaijan has not confirmed its own casualties. 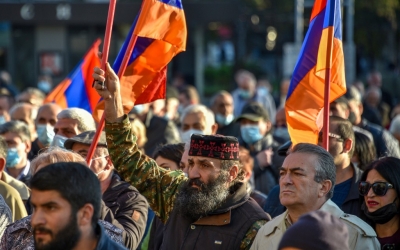 Caught between Russia and Turkey, Armenians say West has abandoned them
Read More »

There is no question that the Armenian army suffered a heavy rate of attrition. One soldier told us that in his unit of 22 men, four were killed, two were still missing and 12 had been wounded, including his own son. He said that in some units three generations would fight together.

During a tour of the city with Artak Beglaryan, the human rights ombudsman for the Artsakh administration, we saw a maternity hospital which had been treating wounded soldiers which had suffered significant damage as a result, according to Beglaryan, of Azerbaijani shelling.

We were also taken to the office of a power station which had been destroyed, and a music school with its windows blown out.

Beglaryan, who was blinded in fighting during the 1990s, said that at least 50 civilians had been killed.

He said he feared for the safety of about 30 civilians who had remained in Shusha, known to Armenians as Shushi, the second-largest city in Nagorno-Karabakh, which had been captured by Azerbajian shortly before the ceasefire was declared.

Both sides in the conflict have accused the other of targeting civilians in the recent fighting. Baku accuses Armenian forces of carrying out a missile strike that killed 13 people and injured dozens more in the western Azerbajiani city of Ganja last month. Both sides deny deliberately targeting civilians.

Beglaryan told MEE that a humanitarian disaster was looming, with about 100,000 Armenians having lost their homes already and the number likely to grow.

“This will increase when the Azeris formally take over villages. These displaced people need food, housing, heat, electricity and gas,” he said.

The city of Stepanakert was eerily empty. Every shop we passed was closed, with the single exception of a small grocery store. Sandbags were piled up against basement windows, marking where Stepanakert inhabitants had been huddled together to hide from bombing.

One woman we spoke to was carrying bin bags full of winter clothes. It was the first time she had been back to her home since fleeing the fighting. She complained about the state of her house, which had been inhabited by her husband, who had lived there throughout the war with volunteer soldiers.

In a poignant touch, she said she could not prevent herself from cleaning up the unwashed dishes before leaving her home again and heading back to Yerevan.

By the time we left Stepanakert in the early evening, the road back towards Armenia was still packed with trucks and cars. Traffic ground to a halt for hours on end as Russian peacekeepers in large armoured vehicles headed towards Stepanakert took precedence on the narrow road.

Eventually the traffic improved and we reached Yerevan at 3am.

The fighting is over for now. As the ceasefire agreement starts to come into effect, and Russian peacekeepers secure the region, the reality of what this means for Armenians is just beginning to be felt. 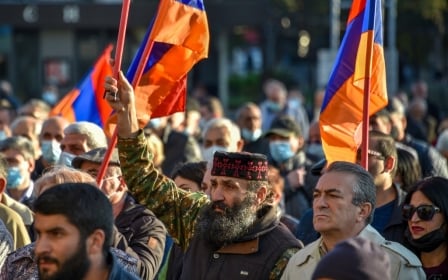