The battle of ideas in Iraq's most dangerous city 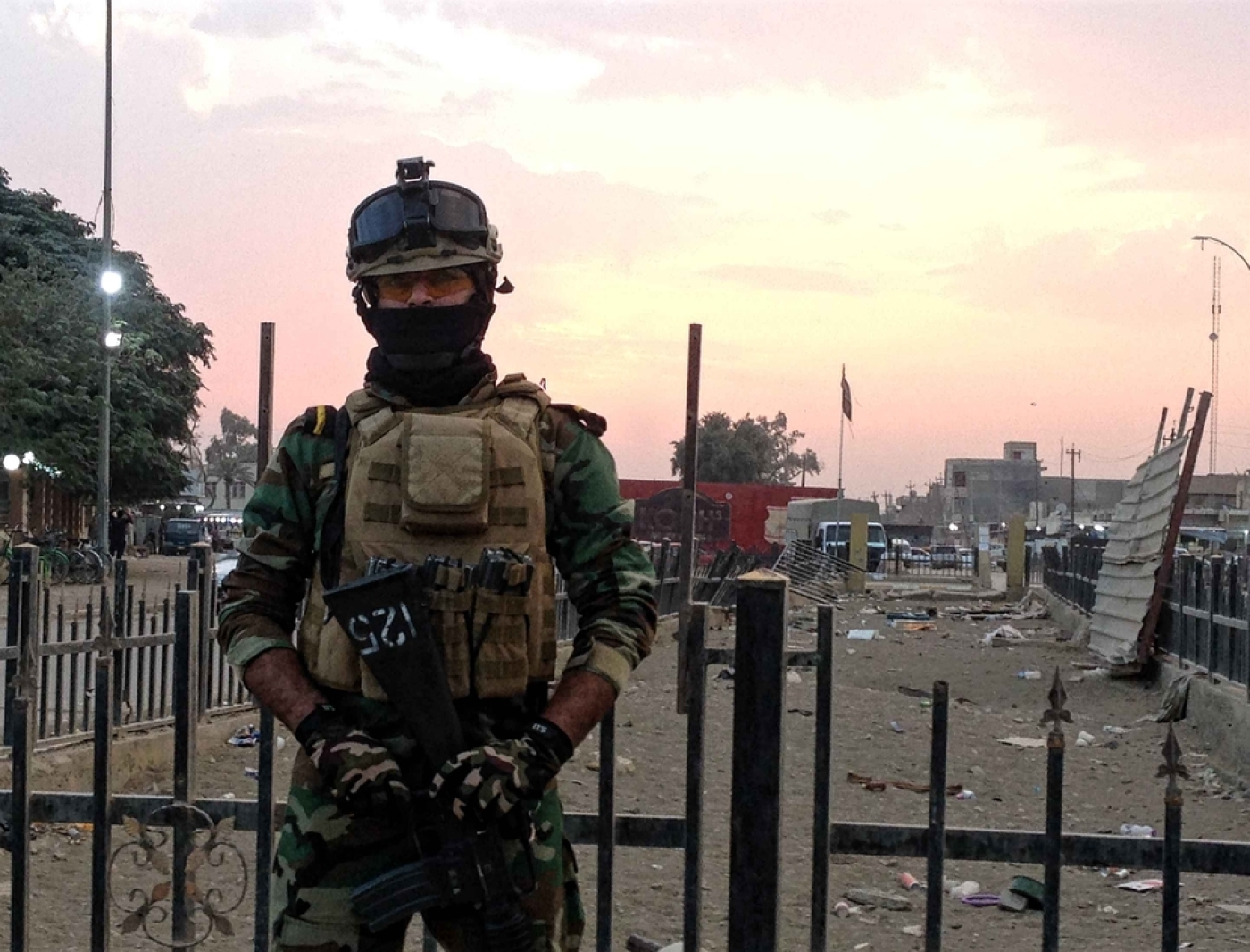 Fallujah, Iraq - Teacher Khasem Abdali stands in front of a group of Iraqis, leading a self-improvement class in downtown Fallujah.

“Why did Daesh kill barbers, musicians and singers?” he asks, refering to Islamic State. “Because Daesh’s version of Islam means killing, hatred and scorn for others, but our true Islam calls for peace, love and equality for all.”

The students, sat in a room without electricity, listen attentively, nod and jot down notes. They are attending one of the five-day courses offered free by Rabbat al-Mohammadi Council (the Council of Mohammadi Sheikhs), a Fallujah-based organisation which has been battling extremist ideologies in Iraq’s restive Anbar province for a decade.

The training is just one part of a de-radicalisation programme run by the organisation, aimed at transforming the religious psychology of post-Islamic State Fallujah, Iraq’s city of 200 mosques.

Famed for its resistance against the US-led 2003 invasion and subsequent occupation of Iraq, Fallujah has long had a reputation for violence and unrest both within the country and beyond. Anbar province was reportedly where more Coalition military fatalities occurred than in any other part of Iraq.

'Even before Daesh took control of the city, all the media showed Fallujah as a city of terrorism'

After the American soldiers left, it rapidly became a hotbed of al-Qaeda terrorist activity before falling to Islamic State (as Daesh is also known) in 2014.

Sheikh Kamel al-Fedawi, one of the council’s 12 religious scholars, explains how an ultra-conservative version of Islam took hold in the city. “Wahhabism started to spread here from the mosques from 2003, when extremists started assassinating our Sufi Sunni imams and destroying the graves of Sufi imams.

“Even before Daesh took control of the city, all the media showed Fallujah as a city of terrorism. Sometimes we have felt as though this was a punishment because this city rejected the occupation by American soldiers.”

Concerned about the local spread of Wahhabi ideas, which the sheikhs say are primarily based around the hadith (the reported sayings, actions and habits of the Prophet Mohammed), the council started to combat extremist thought at its root.

It undertook the huge task of checking each hadith against the Quran, in a project known as Al-Islam Al-Mohammadi (which means "the Prophet Mohammed’s Islam"), and, distancing itself from the sectarian labels of Sunni and Shia, promotes the idea of one Islam.

“Wahhabism is based on ugly and false hadiths,” explains Kamel. “Daesh took some sentences of the hadith and put them into practice, but these sentences did not represent the real thinking of the Prophet Mohammed or Islam. These hadiths are actually historical sentences, not religious ones.”

When the people of Fallujah fled

The project was well under way when IS seized control of Fallujah in 2014. The council’s sheikhs, who had already received death threats for their work, fled, along with an estimated 90 percent of Fallujah’s population (the city numbered around 275,000 residents in 2011).

From the town of Haditha, 200 km north-west of Fallujah, the council ramped up its de-radicalisation efforts. Although it was completely surrounded and under IS siege for 18 months, Haditha was the first town where the sheikhs managed to wrest back control of all mosques from radical Wahhabi preachers.

After Iraq’s armed forces liberated Fallujah in June 2016, the council returned to its ruined and ransacked former premises and raised its "white flag" of Islam above its mosque, which IS fighters had left gutted.

The banner’s blue lettering, against a white background, is inspired by descriptions in the hadiths of the Prophet Mohammed’s own flag and deliberately in contrast to the black flag favoured by IS and Al-Qaeda.

'Now we only have terrorist sleeper-cells, and they are afraid'

In the 16 months since Fallujah was liberated from IS, the council says it has taken back control of all the city’s 200 mosques from radical Wahhabi imams.

Residents say the city is safer now than at any time since the fall of Saddam Hussein.

Haider al-Abbas, 29, a bodyguard, says: “We have more security and freedom now than before Daesh because before that we had Al-Qaeda. Now we only have terrorist sleeper-cells, and they are afraid."

Sheikh Mohammed al-Nouri is the deputy head of the council of sheikhs. Speaking at an anti-terrorism conference organised by Iraq’s Hashd al-Shaabi forces in late October, he said: “After we gained control of all the mosques of the city, Fallujah became an Iraqi city believing in coexistence."

He said that de-radicalisation successes in Haditha and Fallujah could set an example for other countries, including those in Europe. “Iraq is now becoming a nucleus of combatting terrorism in the whole world.”

The council’s work has been so successful locally that the Iraqi government has asked the sheikhs to spread their reach nationally. They have already broadcast 67 programmes on Iraqi TV and say that their ideas are starting to stretch beyond the country’s borders.

“We have produced a one-minute message which we have been disseminating via Facebook,” says Fedawi. “With the right words, one minute is all it takes to start to change people's minds.

“But of course changing people’s minds about religious matters is most effective when done from minarets and inside mosques.”

The council is nearing the end of its cross-checks on all the thousands of hadiths. But while it has scored several notable successes, it sees its work as far from finished.

As part of its long-term goals, the council is boosting de-radicalisation efforts by trying to improve education opportunities from its offices in the heart of Fallujah old town, offering self-improvement courses for adults, to boost communication and leadership skills.

The classes are particularly aimed at Fallujah’s poorer communities, who suffered from more than two years of IS cruelty and brainwashing, as well as the city’s many unemployed residents.

Many families became radicalised through their children, after IS took control of all Fallujah’s schools and brainwashed boys as young as 10, according to Abbas, whose family could not afford to pay IS’s fee of $4,000 per person to escape the city.

“They taught our children a new evil education and used books that taught children about jihad and showed them how to kill and make bombs,” he says.

“It was the children who often convinced their families to believe in Daesh ideologies. Even girls here were brainwashed into becoming suicide-bombers.”

'Daesh persuaded our children to think like them and obey their orders, but we are doing our best to change these ways of thinking'

At the council premises, where separate classes and courses are offered for women and children, Abdali says: “Daesh persuaded our children to think like them and obey their orders, but we are doing our best to change these ways of thinking.”

As well as volunteering with the council, Abdali is also a member of the Rasheed Foundation for Culture, another post-IS organisation working on promoting cultural activities in the city.

“We have many projects in Fallujah after Daesh, especially for children and women,” he says, "and I am happy to have the time, energy and training to help try to change the thoughts of the youth here.”

Rebuilding after reign of terror

While Fallujah begins to repair itself from the psychological pain of 15 years of violence and extremism, modest reconstruction efforts can also be seen across the city.

These are mostly funded by wealthier locals and the UN, while the Iraqi government still pours its resources into the battle against IS.

Much of the city bears the scars of war, including homes demolished by airstrikes, minarets half-felled by gunfire and buildings riddled with bullet-holes.

A handful of premises, owned by local families who supported IS from its inception, are marked on their walls and doors with an encircled cross.

Residents shrug with disinterest. Some of the men from these houses, they say, were killed fighting against the Iraqi army and the rest, along with their families, fled to camps.

IS reigned with terror in Fallujah, stoning women to death for refusing to wear the niqab, branding the tongues of poets and singers, and arresting hundreds who remain unaccounted for to this day. The city’s IS supporters are not welcome to return.

The heavy security and towering concrete bollards at the city’s checkpoints hint at the potential threats still posed by militants in Anbar and beyond.

To the west lies the last pocket of Islamic State-held territory in Iraq, a swathe of Anbar desert abutting the Syria border, where Iraqi Prime Minister Haidar al-Abadi last week announced the liberation of Al-Qaim, a key desert town.

'In Fallujah, Sunni, Shia, Christians and Mandaeans used to live peacefully together, but then Al-Qaeda and Daesh came as tools to divide the country along sectarian lines'

But despite the widespread military presence, and checkpoints and bollards protecting market stalls from potential suicide bombers, Fallujah’s central streets are bustling and lively, as residents put the past behind them and approach the future with cautious optimism.

Before 2003, there was little differentiation in the city between local Sunnis and Shia: interfaith marriages were so common that even one of the council’s Sunni sheikh’s wives is Shia.

“Real Iraqi culture doesn’t separate between regions and parties,” says Kamel. “In Fallujah, Sunni, Shia, Christians and Mandaeans used to live peacefully together, but then Al-Qaeda and Daesh came as tools to divide the country along sectarian lines.”

It will probably be many years before Fallujah’s minority Christians, who fled in fear after the rise of terrorism 2003, contemplate a return.

But, for now, the Shia flags sporadically flying across the city give testament to al-Nouri’s claims that Fallujah is finally starting to return to its pre-2003 state of co-existence. 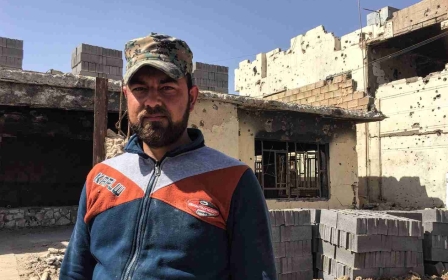 Iraq at War
Fallujah and Ramadi: Where liberation from IS comes at a price 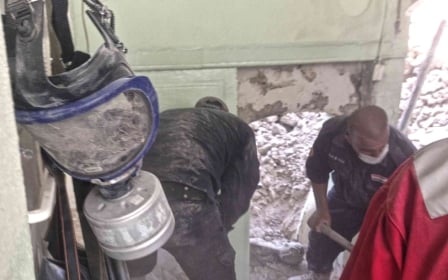