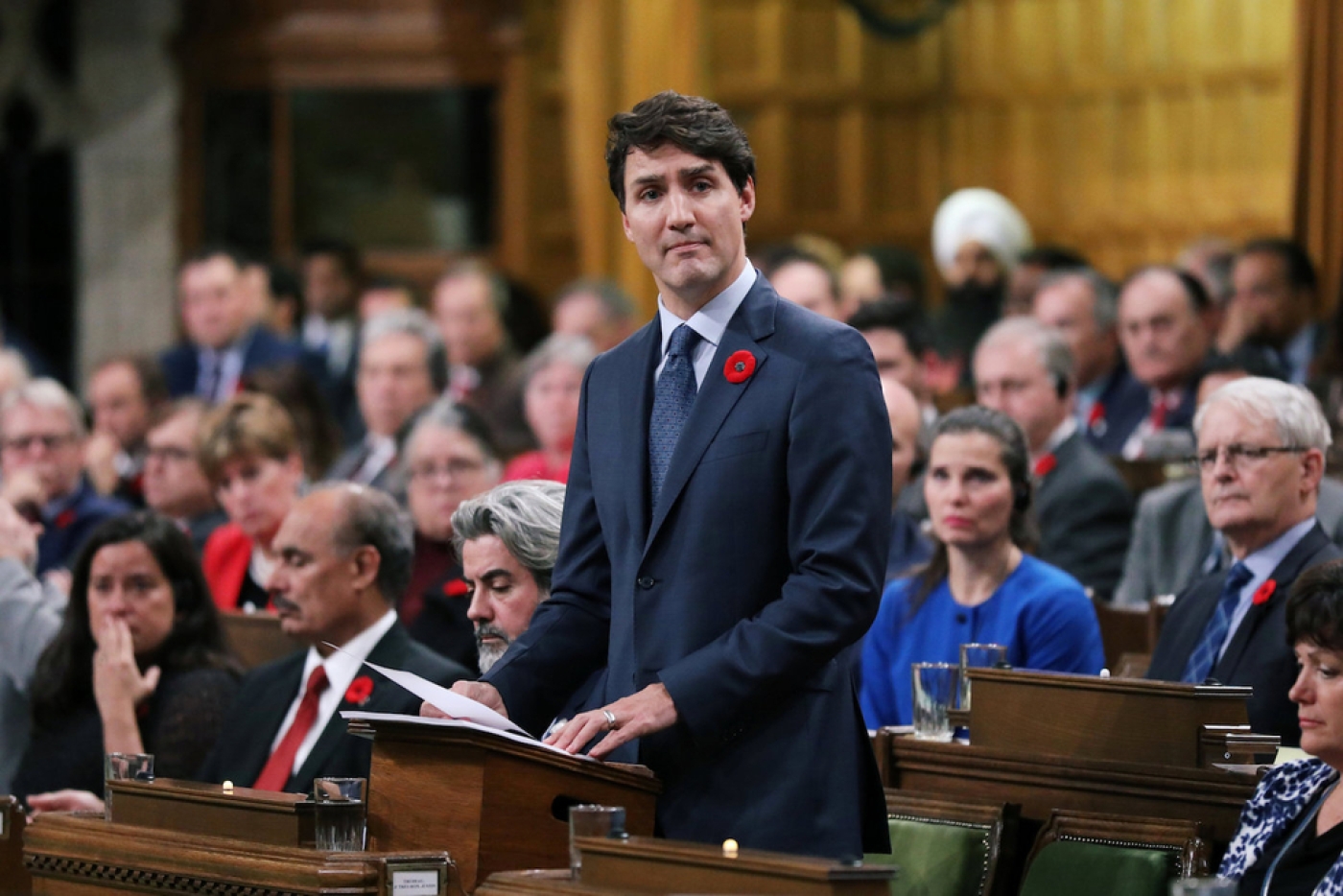 Before he was elected in 2015, Trudeau said BDS 'has no place on Canadian campuses' (Reuters)
By
MEE staff

The Canadian prime minister apologised in the House of Commons on Wednesday for Canada’s decision to turn away a ship carrying more than 900 Jewish refugees in 1939.

More than 250 of the passengers were later killed in Nazi death camps after the MS St Louis was forced to return to Europe, historians have estimated. Canada and other countries in the Western Hemisphere declined to let the refugees in.

"We apologise to the 907 German Jews aboard the St Louis, as well as their families," Trudeau said. "We are sorry for the callousness of Canada's response. We are sorry for not apologising sooner."

The prime minister then pivoted away from the historical episode to condemn anti-Semitism in the world today — and that’s when he linked anti-Jewish racism with the Palestinian-led BDS movement.

Launched by 170 Palestinian civil society groups in 2005, BDS seeks to pressure Israel to end its occupation of the Palestinian territories, ensure equal rights for Palestinian citizens of the state and allow the return of Palestinian refugees.

“Anti-Semitism is far too present. Jewish students still feel unwelcomed and uncomfortable on some of our colleges and university campuses because of BDS-related intimidation,” Trudeau said.

“And out of our entire community of nations, it is Israel whose right to exist is most widely and wrongly questioned.”

BDS organisers reject charges of anti-Semitism and argue that Israel's supporters aim to stifle the debate about Palestinian human rights by conflating legitimate criticism of Israeli policies with anti-Jewish hatred.

Aside from a few measures, such as pledging funds for the UN agency for Palestinian refugees, Trudeau’s Liberals have largely stayed in line with their Conservative predecessors.

On 31 October, Canada's minister of foreign affairs, Chrystia Freeland, was in Israel, where she met with President Reuven Rivlin and Prime Minister Benjamin Netanyahu.

"This is a great friendship between Israel and Canada. It's one that is based on similar values and our commitment to democracy and freedom and liberty and the rule of law and all the good things that I think characterise our two countries," Netanyahu said during Freeland's visit.

The BDS movement, like Israeli Apartheid Week, has no place on Canadian campuses. As a @McGillU alum, I’m disappointed. #EnoughIsEnough

In 2016, the Liberals backed a symbolic parliamentary resolution condemning BDS, "given [that] Canada and Israel share a long history of friendship as well as economic and diplomatic relations".

That motion called on Canada to condemn "any and all attempts by Canadian organisations, groups or individuals to promote the BDS movement".

A year earlier, before he was elected prime minister, Trudeau said he was "disappointed" that a BDS motion was passed at his alma mater, Montreal's McGill University.

"The BDS movement, like Israeli Apartheid Week, has no place on Canadian campuses," he tweeted.