Cannabis in Lebanon: Production may be legal by the end of the year 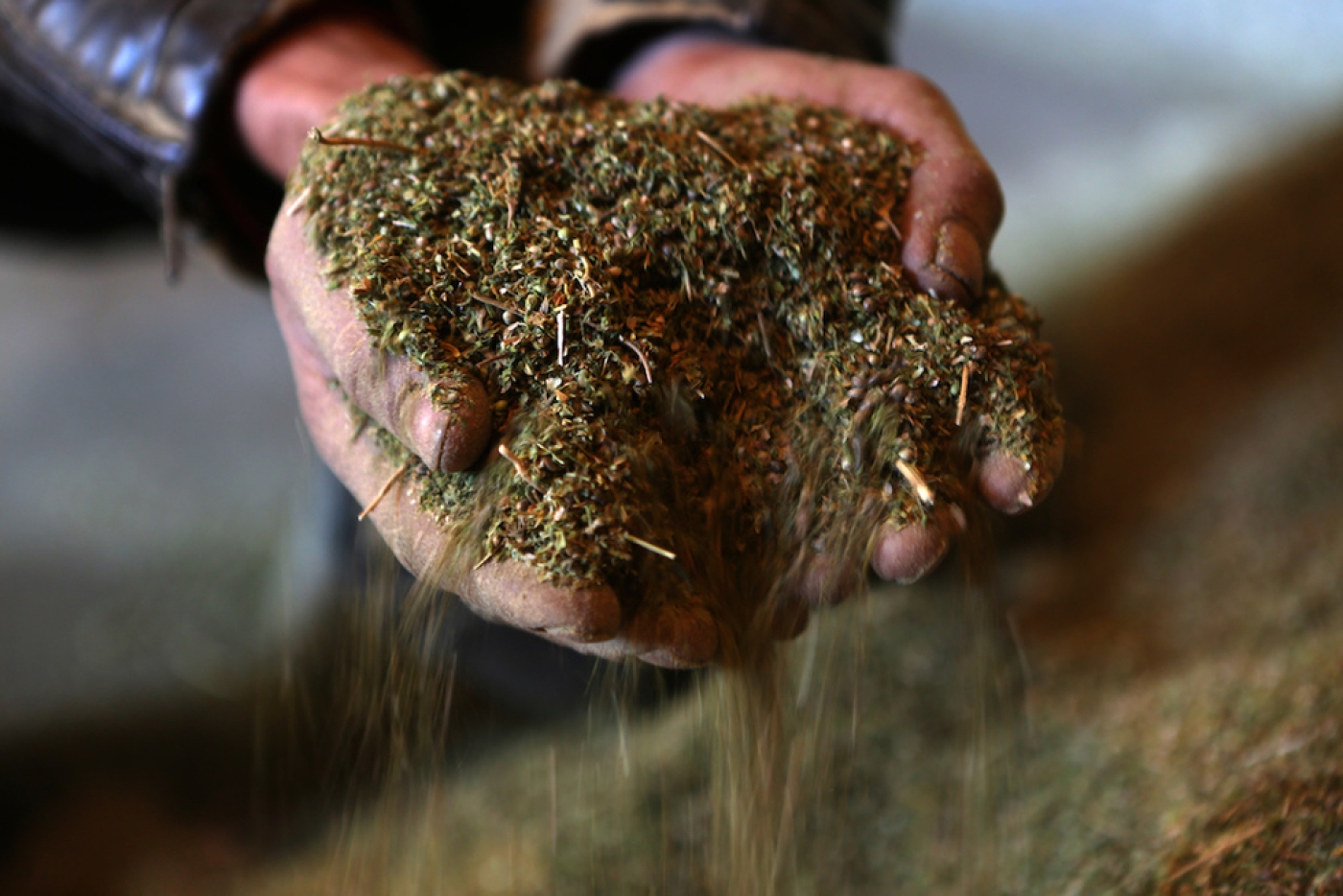 A Syrian refugee displays dry cannabis in the village of Yammouneh, located in the Bekaa Valley (AFP)
By
Sunniva Rose

BEKAA VALLEY, Lebanon – Cannabis production has moved one step closer to legalisation in Lebanon after the presentation of a draft law, proposing it be grown for medicinal purposes.

Antoine Habchi, a newly elected Lebanese Forces MP from the Bekaa, submitted the legislation on Wednesday as an amendment to an existing 1998 law.

Earlier this year, consultancy firm McKinsey & Co recommended the idea after the Lebanese government asked for ideas on how to kickstart the ailing economy.

Lebanon is desperate to boost its economy, which is burdened with a debt-to-GDP ratio of around 150 percent, the third largest in the world.

The Arabic language equivalent of the hashtag #legalise_hashish has gone viral in response to the plan, as the Lebanese got creative about how cannabis could be used. Many tweeted a picture of their national flag with a cannabis leaf instead of the emblematic cedar tree.

Valley of the leaf

Most of Lebanon’s cannabis is grown in the Bekaa, where Habchi is based. He told Middle East Eye that he had been working on his draft plan for months ahead of the publication of the McKinsey report.

“We need to find a way to make sure that farmers make money off cannabis production in a legal way,” he said. “Currently, only the traders, who benefit from political protections, reap the benefits.”

We need to find a way to make sure that farmers make money off cannabis production in a legal way Currently, only the traders, who benefit from political protections, reap the benefits

According to his draft law, approved farmers would buy seedlings from private companies who have “at least 20 years of experience”.

The trade would be supervised by the Department of Narcotics at the Ministry of Health, which would distribute the licences to private companies and inspect farmers’ fields every year before the beginning of each season. The licences would also have to be approved by the government.

Raed Khoury, Lebanon’s acting finance minister, told Bloomberg that legalising cannabis could be a quick fix for a struggling economy and even become a “one-billion dollar industry”.

According to the United Nations Office on Drugs and Crime (UNODC), Lebanon is one of the top five world producers of cannabis resin, behind Morocco and Afghanistan.

Khoury told Lebanese media that cannabis production should be managed by the state, in a similar fashion to how tobacco farming is organised today in Lebanon.

The Lebanese authorities have been fully aware of the illegal trade in cannabis for decades but have either looked the other way or implemented punitive measures such as flattening and burning the crops, leading to violent clashes with farmers.

But these measures have softened since the army focused on securing its borders amid the conflict in neighbouring Syria.

The Christian village of Deir el Ahmar, where Habchi is based, is surrounded by cannabis fields. The crop is found throughout the region, even sprouting at the feet of soldiers manning a military checkpoint a few hundred metres outside the village entrance.

Villagers and farmers said that they backed the legalisation of cannabis for medicinal purposes, as it would provide them with a legal and much-needed income.

Tony, a cannabis farmer who did not want to give his real name for fear of reprisals, said: “Politicians know they can’t piss off the farmers as they could turn against them. They’re in a difficult position.

“At the same time, the government has promised us alternative crops since 1992. Nothing’s happened, and we have to feed our children."

A farmer said he makes $200 off a kilo of hashish, compared to only 33 cents per kilo for wheat or potatoes

He also said that the town of Yammouneh, which sits higher up in the valley, was draining Deir el Ahmar of natural resources. “We don’t receive enough water here to grow anything else but cannabis.”

His argument is also financial: he said he makes $200 off a kilo of hashish, compared to only 33 cents per kilo for wheat or potatoes.

Habchi agreed that the state is incapable of enforcing the law in the area.

“When a village does not have access to its water resources because they are being stolen, and security forces tell you they cannot intervene for 'security reasons', then the state needs to start taking its responsibilities,” he said.

“We have to convince people to abide to the law. It’s a long-term procedure."

Who takes credit for idea?

Cannabis farmers in Deir el Ahmar said they sold their cannabis production to traders who then exported them. “We are just a dot compared to the production in the Shia regions of the Bekaa,” said the owner of a small shop in the town centre, who added that he sold his production to “Shia”.

None of the villagers would discuss whether Hezbollah, Lebanon’s powerful Shia party which dominates the Bekaa as well as being a major player in national politics, was involved.

But cannabis fields are visible in areas close to Deir El Ahmar where Hezbollah’s flags can be seen flying.

They’ve finally realised that a plant which has been grown for centuries can be useful for the country. People in the Bekaa are getting fed up of being ignored and politicians are starting to sense it

Hezbollah has been accused by the US of being involved in drug trafficking, a claim it has denied. It’s media office would also not comment to MEE on the legalisation of cannabis for medical purposes.

The group’s silence is unusual: most Lebanese politicians have been quick to seize on the legalisation idea, many of them giving little credit to the McKinsey report and saying that they thought of it first.

Druze leader Walid Joumblatt, the most vocal proponent of cannabis legislation in recent years, told MEE: “They’ve finally realised that a plant which has been grown for centuries can be useful for the country."

But for him, the reason the idea may finally happen has nothing to do with McKinsey. “People in the Bekaa are getting fed up of being ignored and politicians are starting to sense it,” he said.

During the last parliamentary elections in May, locals publicly criticised politicians according to local media, including a Hezbollah minister, for not caring about their socio-economic concerns.

Nabih Berri, the parliamentary speaker, was the first to announce that Lebanon was considering the idea on 18 July.

Yassine Jabber, an MP for Amal, Berri’s party, said: “Berri got the idea when he visited a pharmacy in Italy recently and saw cannabis derived products.”

Ali Hamdan, a close advisor to the speaker of parliament, said that the only reason McKinsey included it in their report was because it incorporated ideas from various Lebanese ministries.

Last week Berri set up a committee to study the legislation. Hamdan believes it is too early for it to meet but hopes that it could be adopted soon. “Parliament convenes twice a year: in October and in March,” he said. “Hopefully, the law could be voted at the end of 2018."

Why has it taken so long to find an answer to the illegal cannabis trade?

Hamdan shrugs. “Everything takes a long time in Lebanon. The idea is not to attack previous administrations, but to suggest a new option for the economy and put an end to the dispute in the Bekaa between the people and the government that pre-dates Lebanon’s independence.”

Back in Deir El Ahmar, some are more cynical. “Politicians have been talking about legalising cannabis for decades,” grumbled an old man sitting on his porch. “Why would I believe that anything will change this time?”