US lawmakers Betty McCollum and Rashida Tlaib have denounced the fatal shooting of Ali Abu Aalya, 15, by Israeli forces US Congresswoman Betty McCollum denounced the fatal shooting of a Palestinian child by Israeli forces in the West Bank as a "grotesque state-sponsored killing," calling on the incoming administration of President-elect Joe Biden to investigate the incident.

Israeli soldiers shot Palestinian teenager Ali Abu Aalya in the stomach during a protest near his village of al-Mughayir in the occupied West Bank on Friday. He later succumbed to his wounds.

"Yesterday's death of a 15-year-old Palestinian boy in the West Bank by an Israeli soldier who shot the child in the abdomen is a grotesque state-sponsored killing," McCollum told MEE in a statement on Saturday.

"This senseless incident must be condemned as a direct result of Israel's permanent military occupation of Palestine.

"I urge the incoming Biden administration to fully investigate and verify to the American people that no US taxpayer-funded military aid to Israel provided material assistance enabling this taking of a child's life."

The killing of Abu Aalya sparked outrage by Palestinian rights advocates, who say the incident underscores the brutality of the occupation.

The slain child was at one of the weekly Friday demonstrations against Israeli policies in the West Bank, including land confiscation, checkpoints and enabling settlers' violence.

Unicef, the UN agency for children, condemned the killing of Abu Aalya in a statement on Friday.

"Unicef urges Israeli authorities to fully respect, protect, and fulfil the rights of all children and refrain from using violence against children, in accordance with international law," said Ted Chaiban, the agency's regional director for the Middle East and North Africa.

McCollum cited the Unicef's data documenting "232 incidents involved the injury of Palestinian children" from January to September this year.

The congresswoman, a Minnesota Democrat who has championed the human rights of Palestinian children in Washington, introduced legislation last year to ensure that US military aid to Israel does not contribute to the abuse of minors.

While the bill stalled in Congress, McCollum has continued to advocate against the occupation. In June, she was one of 13 legislators to sign a letter vowing to condition aid to Israel if it proceeds with its plans to annex large parts of the West Bank.

Earlier this year, she received the "Champion of Palestinian Rights Award" from American Muslims for Palestine (AMP).

McCollum's fellow House Democrat Rashida Tlaib, who is of Palestinian descent, also condemned the killing of Abu Aalya. "No child deserves to die like this," she wrote on twitter on Friday.

There have been conflicting reports about the exact age of Abu Aalya. While Unicef said he was 15, some Palestinian organisations have said that he was as young as 13 years old.

Abu Aalya's funeral was held in al-Mughayir, east of Ramallah, on Saturday with thousands of Palestinians attending.

"My deepest sympathies to the parents and family of Ali Abu Aalya for their heartbreaking loss," said McCollum. 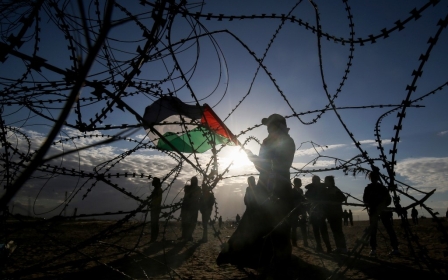 US Politics
'From the river to the sea': Palestinian advocates say call for freedom is not antisemitic