Covid-19: The two weeks that led to Lebanon’s virus disaster 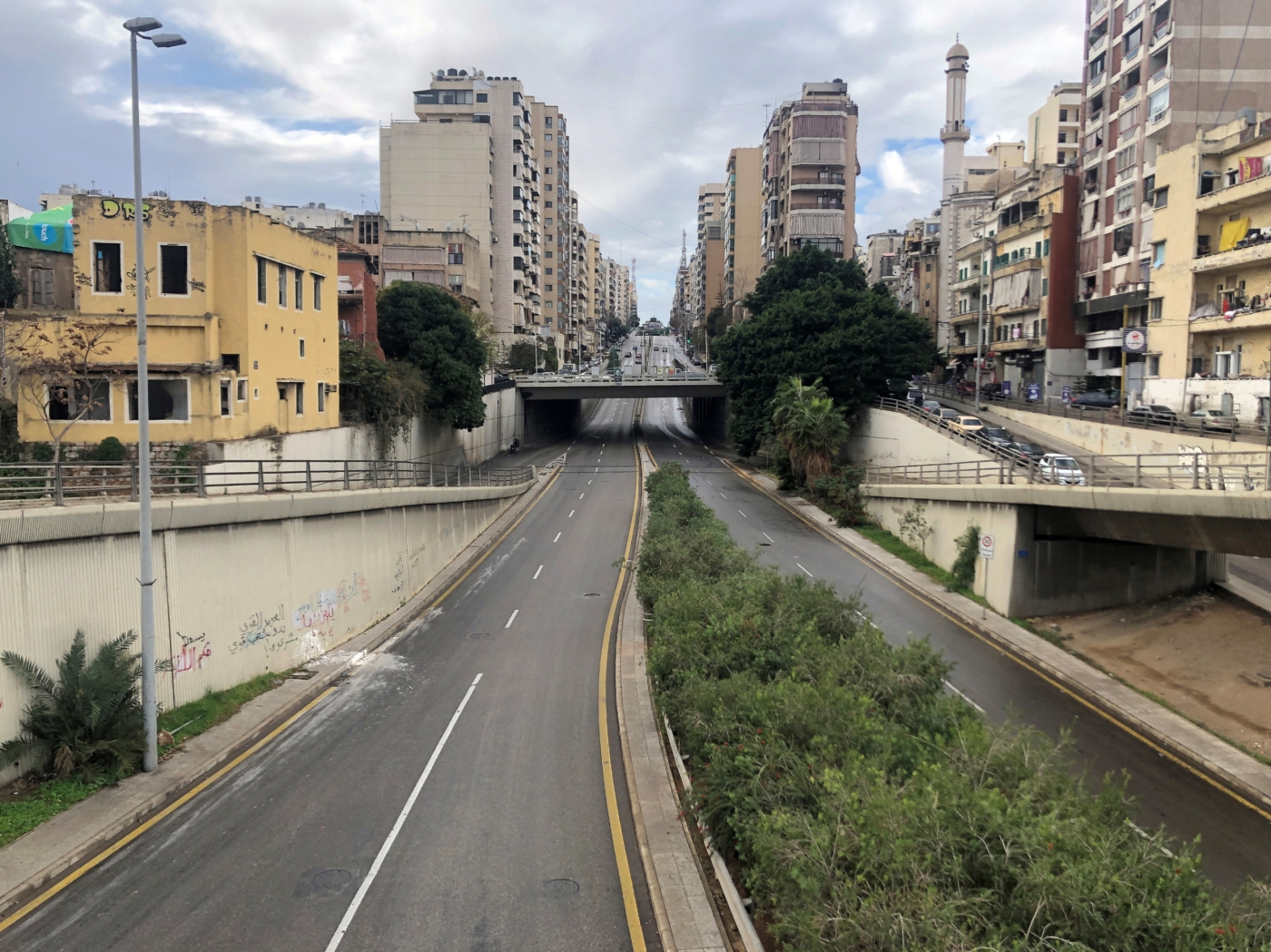 Empty roads in Beirut, as Lebanon tightened lockdown and introduced a 24-hour curfew to curb the spread of coronavirus, 14 January 2021
By
Adam Chamseddine
in
Beirut

In April, when much of the world was struggling to contain Covid-19, Lebanon, a country trapped in a cycle of corrupt and incompetent governments, was surprisingly getting applauded for controlling the spread of the virus.

“Somehow, this messed-up country, teetering on the brink of economic ruin and political chaos, has done something right when it comes to the coronavirus,” read a Washington Post article last April about Lebanon’s success story.

'We might be heading to what will later be known as the 'Lebanese scenario', in which infected people start to fight over hospital beds and oxygen equipment'
- Dr Assem Araji, MP

Eight months after that article was published, however, the situation in Lebanon has witnessed a drastic flip, with the rate of infections now running on the same trajectory as some of the worst-hit countries, whose populations are significantly bigger.

Lebanon, with a population estimated at around six million, has registered more than 252,800 cases and 1,906 deaths since the outbreak of the pandemic, with daily numbers continuously reaching record highs in recent weeks.

Footage from various hospitals have shown the disastrous state of the medical sector, with some experts comparing it to the Italian scenario, where hospitals, in the first few months of the outbreak, were completely overwhelmed with Covid-19 patients and barely able to cope.

In Lebanon, patients are now being treated in hospital parking lots, with doctors saying they have been forced to supply oxygen, do blood tests and scans outside of hospitals, which only have the capacity to receive patients based on age and severity.

Lebanese MP and health committee member Dr Assem Araji last week said that likening the strain on the medical system to the Italian scenario might even be an understatement.

“We might be heading to what will later be known as the ‘Lebanese scenario’, in which infected people start to fight over hospital beds and oxygen equipment,” he said in an interview.

“We have surpassed the Italian scenario.”

So how did a country go from being celebrated to having a health sector on the verge of collapse?

On 17 December, four days before a two-week lockdown ended, the government decided to lift a series of mandatory restrictions for the holiday period, urging citizens to abide by safety measures, including wearing masks and social distancing. The decision was taken following enormous pressure from the tourism and services sectors, which were eager to drum up as much business as possible during the holiday season, as the country suffers through a pandemic-hit economy, already in the throes of the worst crisis in its recent history.

The move to loosen up restrictions was accompanied by measures that have been described as a joke.

In its decree, the government restricted establishments to a 50 percent capacity, but banned dancing in clubs, pubs, and restaurants, a point that was widely ridiculed by Lebanese.

The head of the restaurant owners' syndicate, Tony al-Rami, responded to the decree by saying at a press conference that they “shall invite the Lebanese to dance on their tables”.

In its attempts to balance between economic pressure and Covid-19, the government has willingly triggered a medical nightmare.

Establishments did not abide by the maximum capacity rule, nor did they prevent people from dancing, on or off tables. Restaurants and pubs were overcrowded, while private parties and gigs held in restaurants gave the feeling that the pandemic never reached Lebanon.

In one incident, a Lebanese singer who took part in a fully-booked New Year’s Eve event in a Beirut hotel declared two days later that he had tested positive for Covid-19.

The government, on its part, did not crackdown on those who flouted the decree nor did it move to shut down private parties.

A worker at a restaurant in central Beirut, who spoke to Middle East Eye on condition of anonymity, said that the owner had asked the entire staff to attend work due to the high number of customers frequenting his establishment during that period.

He also revealed that several of his colleagues were suspected of having contracted the virus, but the owner’s response was “suck it up and show up to work, or stay home for good".

'Suck it up and show up to work, or stay home for good'
- Restaurant owner

These incidents have reflected a reckless profit-mentality that was adopted by business owners during the two-week holiday season and the lack of government control.

The footage of crowded parties and gatherings that circulated on social media offered a glimpse at what awaited the country in the following weeks.

Covid-19 cases blew up after the holidays, and Lebanon proceeded to record more than triple the daily number of infections before the government’s decision to ease restrictions. On Friday, Lebanon registered a daily record number of 6,154 cases and 44 deaths.

The sharp rise in cases forced the government to face the repercussions of its ill-thought out decisions, as it initiated a third and complete 24-hour lockdown, with the harshest measures yet, including some that are impractical, and others that have already proven to be ineffectual.

During the second lockdown, that ended on 17 December, the health minister said that one measure in particular had dangerous consequences. It consists of alternating the days of the week between odd and even car registration numbers.

Health minister Hamad Hassan said this step has contributed to the increase in infection, as people resorted to sharing cars to move around. However, despite heavy criticism, mainly from the public, the government included the measure in the current lockdown.

Some experts have suggested that the reason behind this decision had more to do with decreasing fuel consumption, as the country faces growing financial pressures to import new supplies.

Another criticised lockdown measure that has been implemented for the first time in Lebanon forbids in-person shopping at supermarkets and convenience stores, with only deliveries allowed. As news of the new lockdown measures were leaked, hundreds of people flooded the markets to stock up on necessities before the measures became official.

One manager, Mahmoud, told MEE that his supermarket ran out of various products after the leak, but even after restocking, they are experiencing a lot of pressure as they attempt to accommodate everyone.

“After the lockdown started, we were able to restock, however the problem we are now facing is a lack of employees to deliver orders,” said Mahmoud, using a fake name.

He added that the main problem is committing to a timeframe.

“Our usual delivery time was between 30 minutes and two hours, but now, with the mounting pressure we are facing, the delivery timeframe is at least a day.”

‘Look around you now’

'We will soon be seeing the daily death toll reaching at least 100 or more'
- Dr Karam Karam, former health minister

Karam told MEE that the death toll is expected to rise dramatically in the next few weeks.

“We will soon be seeing the daily death toll reaching at least 100 or more,” he said, adding that the level of incompetence among Lebanese officials would lead to a disaster.

“Lebanon was once seen as the top medical destination in the Middle East, but look around you now, many Arab countries have already started administering the vaccines, whereas the Lebanese officials just found out they needed to amend a certain law in order to receive the vaccine,” he said.

The law that Pfizer has required to be amended places liability on companies producing vaccines and not on the state. On Friday, the Lebanese parliament passed a law granting the emergency use of the coronavirus vaccine, and while the first shipment of doses will now be received in mid-February, as previously scheduled, the government was denounced for not preparing for this eventuality.

Hassan, who was admitted to an intensive care unit on Thursday after contracting the virus, has received the wider share of criticism for his ministry’s management of the crisis.

The minister had said in various interviews that the Lebanese should abide by safety measures and that their safety is in their own hands, but these statements have backfired on him, when photos of him attending a large lunch gathering during the second lockdown emerged on social media.

Also, a recent picture of a packed dinner table with the country’s caretaker economy and health ministers. pic.twitter.com/KSXOgI0eEO

Hassan later apologised for “his mistake” and said that he should not have been part of such an event.

Last Monday, Lebanon’s Security Council declared a state of emergency until the first of February, a late decision that many health experts expect not to save the country from the health crisis it might soon be facing. 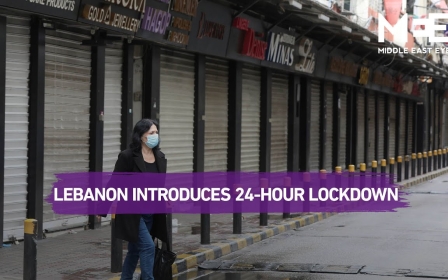 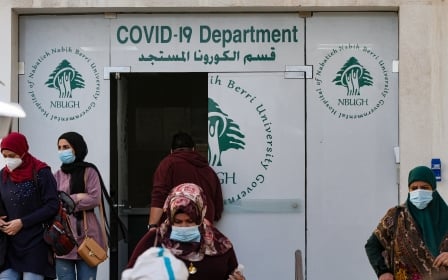