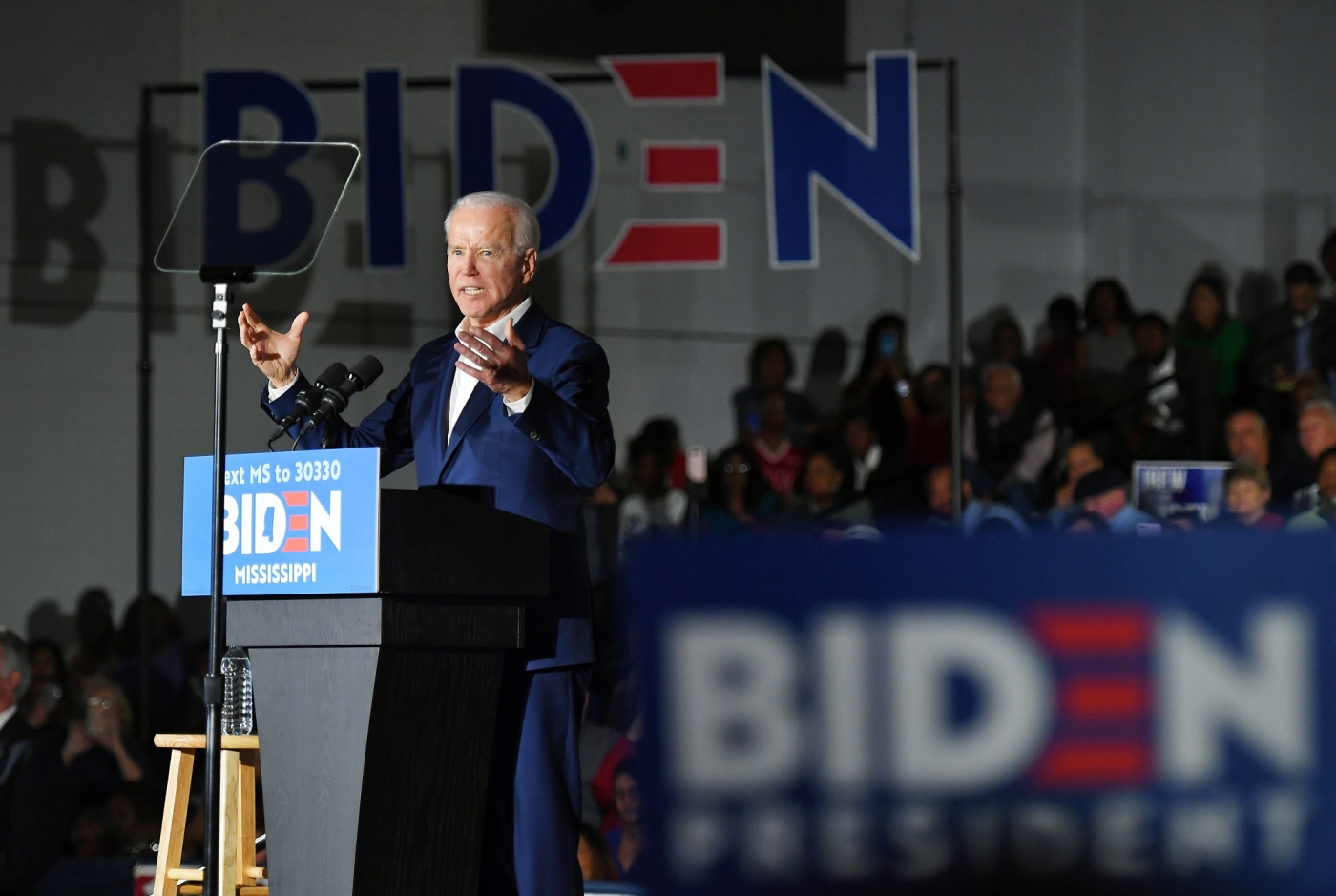 Biden delivered a video message to the AIPAC conference early in March as Sanders skipped the event (AFP/File photo)
By
Ali Harb
in
Dearborn, Michigan

The endorsement by the Democratic Majority for Israel (DMFI) - which is linked to AIPAC - comes a day ahead of a crucial round of primaries, after Biden took the lead in what has become a two-candidate race for the Democratic nomination.

"As senator and vice president, Joe Biden has proven he will fight for Democrats' broad vision for America, including a strong US-Israeli relationship," DMFI president and founder Mark Mellman, who is a prominent AIPAC strategist, said in a statement on Monday. Several Israeli and Republican officials had criticised Sanders for skipping the AIPAC conference in Washington earlier this month. The Vermont senator boycotted the event, accusing the pro-Israel organisation of providing a platform for "bigotry".

Biden delivered a video message to the conference in which he emphasised the importance of US-Israeli relations and talked up his pro-Israel credentials. But he also criticised Israel for settlement expansion.

He said it was "dangerous" for support to Israel to become a partisan issue between Democrats and Republicans.

"We can't let anything undermine the partnership that has grown and flourished from the moment of Israel's founding," Biden said in the video.

DMFI ran ads attacking Sanders ahead of the early primary states in February, questioning the senator's health and electability without tackling his foreign policy ideas.

Sanders has vowed to condition aid to Israel in order to pressure it to end its abuses against Palestinians and ease the humanitarian crisis in Gaza, winning the support of many Palestinian groups and activists across the country.

Amer Zahr, a Palestinian-American activist and comedian who is a surrogate for Sanders' campaign, said it was not surprising that DMFI was backing Biden, who has been a "close friend of the pro-Israel lobby for decades". "They are afraid of a candidate who calls for a fundamental change in the way that we look at the Palestinian-Israeli issue like Bernie Sanders," Zahr told MEE.

He added that DMFI wants to make sure that the status quo of "blind support for Israel" in the US is not threatened.

The pro-Israel group's endorsement was announced less than 24 hours before voters in Michigan, home to a large Arab-American community, head to the polls.

"They have a choice between two candidates: One who is going to not change anything about the way America has dealt with Israel for the past 70 years; and another candidate - a Jewish candidate - who is going to reassess the way we look at this and start taking the rights of the Palestinian people into account," Zahr said.