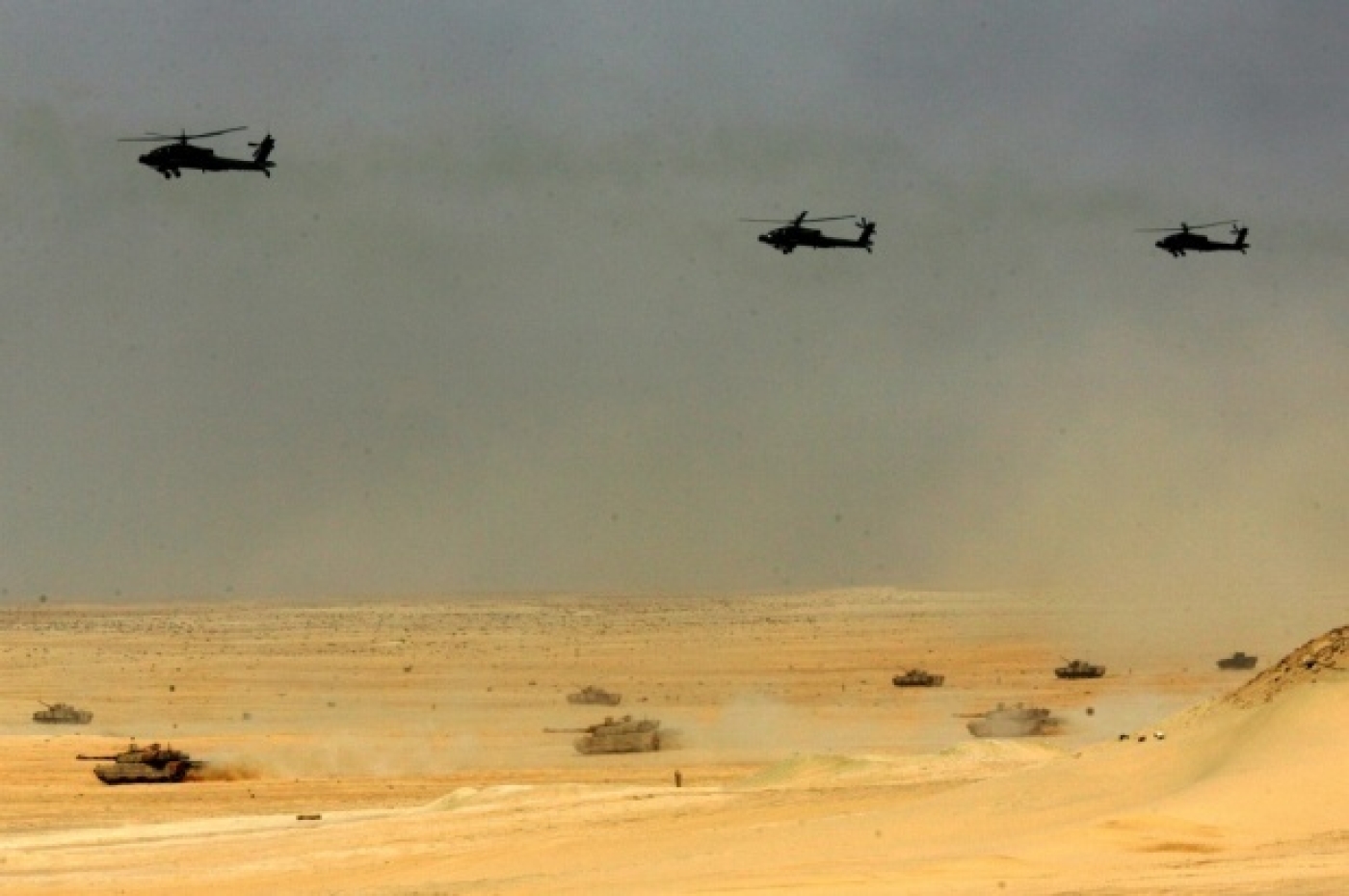 The Egyptian army has conducted air raids against suspected militant sites in Sinai on Friday after a series of deadly attacks in the Peninsula killed at least 30 soldiers on Thursday night, Egyptian media reported.

There is a security alert in the North Sinai province where Apache helicopters were deployed to bomb "terrorist" positions, said the Egyptian daily newspaper al-Youm al-Sabea.

Two children were killed in clashes between the army and Sinai militants, security officials said.

Health officials said a six-month-old baby was hit in the head by a bullet and a six-year-old was killed in a rocket blast in the peninsula. Two more people including a 12-year-old were badly wounded by gunfire.

The attacks prompted President Abdel Fattah al-Sisi to cut short his visit to Ethiopia and return to Cairo.

"Following the terrorist attacks that hit Northern Sinai late Thursday, President Abdel-Fattah al-Sisi decided to only attend the opening session of the African Union summit and return to Cairo to follow up the situation," a press statement from his office said.

The Sinai-based Ansar Beit al-Maqdis (which is now using the name Welayet Sinai after reportedly swearing allegiance to the Islamic State) claimed responsibility for the attacks, which involved firing a barrage of rockets and setting off a car bomb.

The militant group tweeted that it "executed extensive, simultaneous attacks in the cities of El-Arish, Sheikh Zuweid and Rafah" in North Sinai.

In a statement released on Friday they claimed that they had killed and injured hundreds of soldiers, including senior officers and that the assault had involved "almost a hundred" of their own fighters.

Egyptian security officials said the militants targeted El-Arish police headquarters, a military base and a housing complex, followed by an exchange of fire between the militants and troops.

There are reports that the total death toll in Sinai has reached 37, with 80 wounded.

The attacks came despite a series of security measures implemented by the authorities in North Sinai following a deadly attack in October that killed 31 soldiers and wounded scores.

The measures included building a buffer zone along the Gaza border and imposing a state of emergency and night-time curfew in parts of North Sinai.

The attacks were denounced by the Muslim Brotherhood, which reiterated its rejection of all acts of violence, despite state crackdown on it supporters following the military overthrow of Egypt's first freely-elected president Mohamed Morsi on 3 July, 2013.

"We express our sincere condolences to the victims, their families, and the government and people of Egypt," State Department spokesperson Jen Psaki said in a statement.

"A prosperous and strong Egypt requires an environment of security and stability, and the United States remains steadfast in its support of the Egyptian government’s efforts to combat the threat of terrorism in Egypt as part of our continuing commitment to the strategic partnership between our two countries," Psaki added.

'If you break the curfew you could face death yourself'

Muhamed Sabry, an MEE contributor on the ground in al-Arish, said his house had been rocked by three large explosions.

"Suddenly we heard a huge explosion, followed by two more - it sounded like the blasts we used to hear during last year's bombardment of the Gaza Strip [just over the border]. Our house shook as if an earthquake had hit. The windows smashed, and there is glass all over the furniture.

"It is like hell now - there was a lot of shooting after the explosion, and people were too afraid to carry the wounded to the ambulances because of it.

"Up to 14 civilians were injured when their homes were hit. I've heard that a 15-day old baby was one of them."

According to Sabry, the attacks hit at around 8.30pm local time [19:30 GMT], 90 minutes after the curfew comes into place.

"There are questions to be answered as to how these attacks hit during the curfew hours. It shows that the militants are very intelligent and well-organised.

"The curfew hours are a time when few civilians are on the streets - the timing could show that the militants are committed to not injuring civilians.

"However, in practice it is much worse for attacks to happen during the curfew. When there are a large number of casualties like today, hospitals have to put out an urgent call for blood donations. But it is not possible to go out and help, because if you break the curfew you could face death yourself.

"Ambulances are still coming and going. There is a sense of horror among people here in al-Arish about what has happened. But we are used to things like this."