An Egyptian court has sentenced human rights lawyer Zyad El-Eleimy to one year in prison on charges of spreading false news in a BBC interview he conducted in 2017.

According to a statement by the Free Zyad El-Elaimy Campaign, the lawyer and liberal politician was sentenced to one year and fined 20,000 Egyptian pounds ($1,272) by a Cairo misdemeanour court on Tuesday.

The charges against Eleimy were linked to an interview with BBC, cited by a lawyer who submitted the complaint three years ago, in which he allegedly said that Egypt holds thousands of political prisoners.

Eleimy’s lawyer Ahmed Fawzi told Reuters that the defence team had been unable to identify the BBC interview. 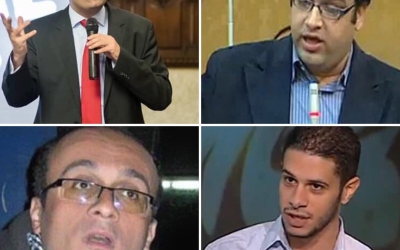 The sentence has been appealed and a hearing is due to be held on 7 April.

Amnesty International on Wednesday condemned the charges as "unfounded".

"He is a prisoner of conscience, who has been swept up in Egypt's ruthless purge of critics and opponents," the rights group said in a statement.

“The unfounded charges of which Zyad has been convicted stem solely from the peaceful expression of his opinion and his peaceful political activities, demonstrating the Egyptian authorities’ total intolerance of dissent,” said Philip Luther, Amnesty International’s Middle East and North Africa director.

“We call on the Egyptian authorities to immediately and unconditionally release Zyad and to drop all charges.”

Eleimy was arrested in June 2019 in a crackdown that included four other activists.

A human rights lawyer, Eleimy is a former member of parliament and one of the youth leaders of the 2011 pro-democracy revolution.

His family and friends have warned that he suffers from diabetes, high blood pressure and asthma.

Eleimy has been in pre-trial detention since his arrest, pending investigation in the “Hope case” where he is accused of "terrorism-related" offences after attempting to set up a secular electoral grouping called the Hope Alliance for the 2020 parliamentary elections.

Eleimy’s mother, Ekram Youssef, said that Tuesday’s session was a public session, and her son’s friends had a rare chance to see him in court.

Coronavirus
Panic in Luxor: Coronavirus outbreak in Egypt found to be centred on ancient city