Egypt’s Ministry of Justice has submitted a bill to parliament proposing amendments that would include further protections for survivors of sexual harassment who are afraid to speak up.

The bill, submitted to parliament on Wednesday, would ensure “full confidentiality” for the survivors, with the purpose of “protecting their reputation”.

According to a government statement, the bill will protect the identity of survivors of sexual crimes, such as rape, assault, and harassment, by introducing several amendments to the penal code and the children’s law.

It aims to make it safer for survivors to seek justice and to name the perpetrators of those crimes without fear of retaliation.

It will also make it a crime to disclose any information related to the survivors, in accordance with article 310 of the penal code.

The government cited the reluctance of some in recent cases to file criminal complaints against their attackers.

The bill comes days after Egyptian authorities arrested a 22-year-old man who has been accused by some 100 women of a range of sexual crimes, including blackmail, rape and online sexual harassment.

The prosecution named the suspect as Ahmed Bassam Zaki and ordered his pre-trial detention for 15 days pending investigations into complaints submitted by six women, including a minor.

The prosecution said on Monday that the women had initially refrained from talking about their cases for fear of being blamed for the assaults. They decided to come forward, however, after the online campaign against him.

Zaki was arrested on Saturday after a number of anonymous posts had surfaced on social media since the beginning of July, accusing him of sexual offences.

Independent Instagram and Twitter accounts run by a campaign titled, "Assault Police", encouraged his alleged victims to share evidence of his behaviour with the account's administrators to be used during investigations.

The accounts have so far received more than 100 complaints related to Zaki, dating back to his high school years.

A former student at the EU Business School in Barcelona, Zaki was expelled after one student submitted evidence of online sexual harassment to the school’s administration, a spokesperson for the school told Middle East Eye.

Zaki's case has sparked a renewed campaign in Egypt against sexual harassment, urging survivors to speak up and denounce those that blame women for attacks.

Religious institutions Al-Azhar and Dar al-Ifta took part in the debate by highlighting that both harassment and blaming the victims are prohibited in Islam. 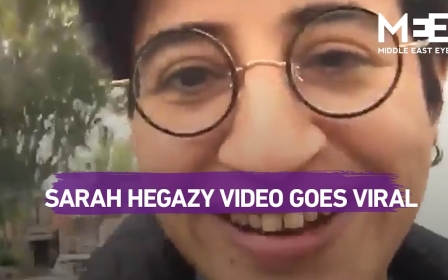