Formula One back in Bahrain amid heightened rights concerns As the Formula One star drivers descend on Bahrain ahead of this weekend’s Grand Prix race debut, human rights activists have raised concerns regarding the Gulf country’s harsh human rights record.

With minimal room to debrief after the Chinese Grand Prix, the race teams arrive in Bahrain for the first night race of the season - round four of the 2015 FIA Formula One World Championship which will be held at the Bahrain International Circuit.

Several global champions including Daniel Ricciardo, Marcus Ericsson and Felipe Massa have expressed their excitement to return to a country and track that has seen many historic victories.

In 2006, the Bahrain Grand Prix celebrated a great win for world champion Nico Rosenburg when he came wheel to wheel with Mercedes team mate Lewis Hamilton.

In a reflection of state officials’ delight to host another annual contest, Bahrain’s minister of state for telecommunications welcomed via Twitter the competitors back to the Kingdom.

When the F1 first arrived in 2004, Bahrain knew that it was breaking new ground, and since then it evolved as“Home of Motorsport in the M.E.

In a series of tweets that followed, the prince went on to explain the plethora of benefits that the Grand Prix has contributed to Bahrain since it was first held in the kingdom in 2004.

He cites increased tourism and employment opportunities among others.

The track supports employment of over 4,000 people – predominantly made up of local workers, has a local economic impact of almost $300M..

While to some, the festivities are about to peak in Bahrain, human rights watchdogs have voiced concern over the severe repressive measures used by the Bahraini government against political dissent.

According to Amnesty International’s most recent report, the Gulf state has continued to stifle and punish opposition and curtail freedoms of expression, association and assembly.

The Amnesty report highlights issues of excessive use of force by Bahraini security forces to disperse protests and the sentencing of opposition activists after unfair trials as two major grievances, among others.

The report also pointed to the continued use of torture against detainees as well as the prevalence of a climate of impunity.

Bahraini courts sentenced five people to death during 2014, while in 2015 three others were handed death sentences in February alone.

The hosting of the championship in Bahrain despite the country’s worsening human rights record has prompted activists and organisations to demand action in order to curb the increase in abuses.

According to a press statement released by Americans for Democracy & Human Rights in Bahrain (ADHRB), the organisation successfully mediated complaints concerning the lack of consideration regarding Formula One’s impact on Bahrain’s rights record.

Several claims were made against Formula One regarding the adverse impacts on human rights in Bahrain during the annual race, according to ADHRB’s release.

Following the mediation, Formula One has allegedly adopted a human rights policy, as a result of which it will examine the impact of holding the race in Bahrain.

“Formula One has for the first time … committed to respecting internationally recognised human rights …[and to] develop and implement a due diligence policy in which Formula One analyses and takes steps to mitigate any human rights impact that its activities may have on a host country, including on the human rights situation in Bahrain,” said the statement.

This development has been hailed by human rights activists as a significant first step in addressing human rights abuses in the country during the race.

Playing a key role in the mediation was Nabeel Rajab, member of ADHRB’s advisory board and the president of Bahrain Center for Human Rights, who was detained by Bahraini authorities only two weeks before the start of the race.

On 10 April, the United States called for authorities in Bahrain to release Rajab, who was reportedly arrested for commenting on social media about the alleged torture of political prisoners in the Gulf kingdom.

Rajab’s arrest has been seen by activists as a signal that little will be done by the Bahraini authorities to turn around the country’s human rights situation.

According to Sayed al-Wadaei, director of advocacy at the Bahrain Institute for Rights and Democracy (BIRD), the government typically starts targeting any activists or influential figures who have voiced dissent during the few weeks leading up to the annual event.

Wadaei believes this is the reason for Rajab's arrest.

"The last thing the government wants to see is activists on the ground speaking to journalists, who have come to cover the race, about Bahrain's reality," he told MEE.

With journalists coming over to cover the race potentially branching out into into other issues, the government tries to silence any voices speaking up about the human rights abuses in Bahrain, says Wadaei.

Between 19 to 21 youth activists were reportedly arrested in a raid campaign on the activists’ homes on Tuesday, according to Bahraini website Louloua.

#Bahrain: Last week from 6 to 12 April, #BCHR documented 19 arbitrary arrests, including 3 children under the age of 18 & 1 woman

The Formula one Grand Prix is to take place between 17-19 April.

Foreign and local journalists were barred from covering protests during previous Grand Prix events, with some deported from Bahrain for attempting to do so without prior authorisation.

"Bahraini’s have been burning model race cars and tiersin the streets and calling the race 'bloody F1' to express their anger at holding the race in Bahrain," said Wadaei.

"The abuses in the country are noticibly heightened during the race inevitably leading to local calls for a boycott," he added. 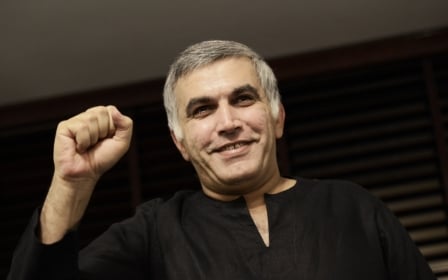