About 25 people threw themselves into the water to attempt to swim towards ship, forcing captain to pull back 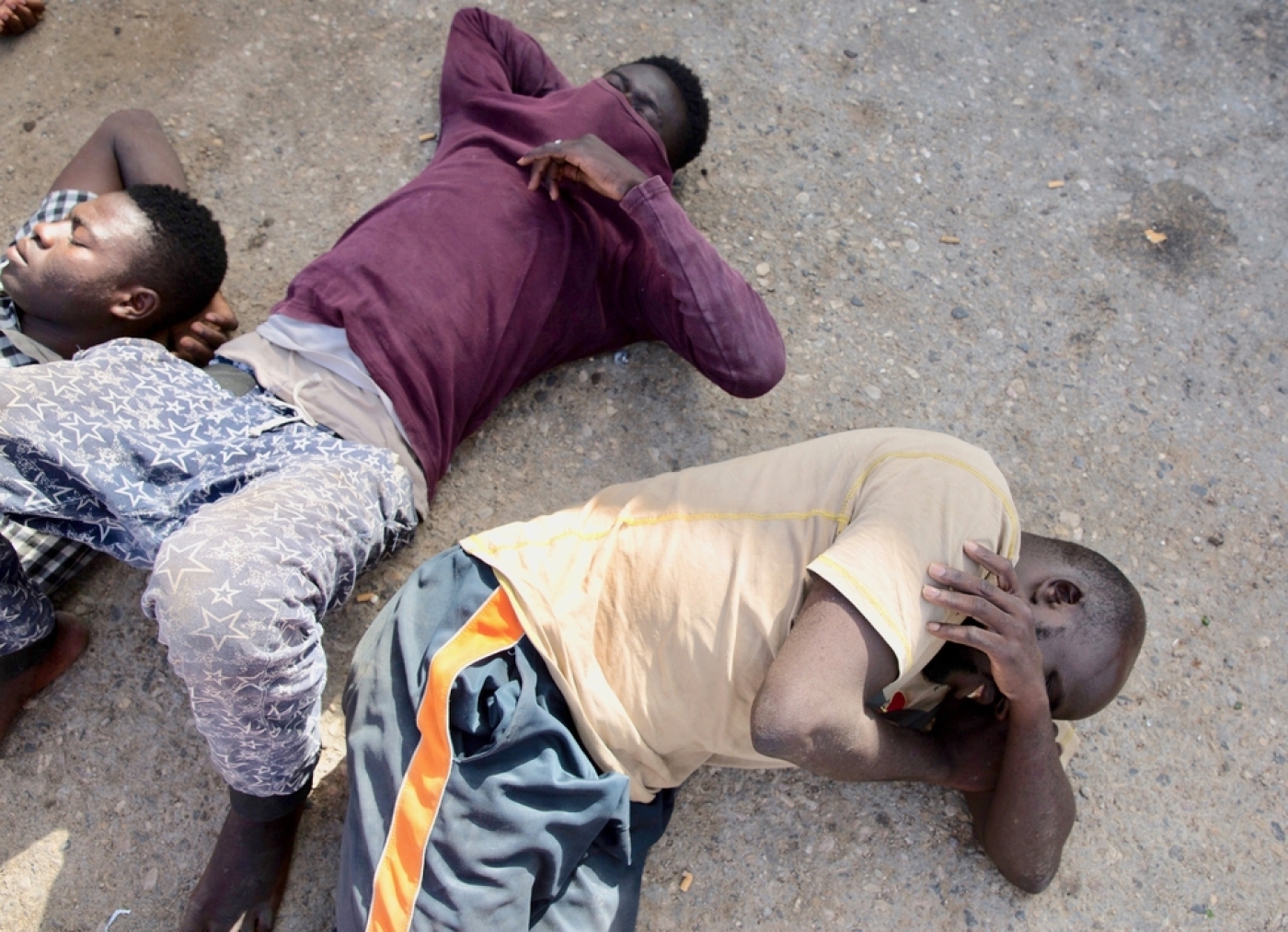 Migrants, who were rescued by Libyan forces on Saturday, rest at Tripoli Commercial Port before being transported to a detention centre (AFP)
By
AFP

Horrific scenes unfolded in the Mediterranean off Libya on Saturday as a full-to-capacity rescue ship was forced to sail away from desperate migrants trying to swim towards the rescuers.

Nine people drowned and 10 were missing after a dramatic 24 hours in which the crew of the Norwegian Siem Pilot and Medecins Sans Frontieres' Dignity rescued hundreds of panicked migrants in the dark, with only limited resources and in the face of aggressive people smugglers.

At least 8,000 migrants have been saved off the coast of Libya this week alone.

"I've never had an SAR [search and rescue] like it. We were in the process of transferring 1,000 migrants from the Okyroe [tanker] to the Siem Pilot when suddenly, in the dark, rubber boats appeared. It looked hopeless," said Pal Erik Teigen, the police officer in charge of the rescue operation.

Migrants aboard one of the rubber boats that had yet to be rescued desperately sought to reach the rescue ship that was by that point full to capacity and unable to take on more passengers, motoring towards it while crying out for help.

Around 25 people threw themselves into the water to attempt to swim towards the Siem Pilot, forcing the captain to pull back to deter others on the dinghy from doing the same.

Speed boats from the Siem Pilot later pulled the migrants from the sea and the dinghy and transferred them onto the tanker to await rescue by another vessel, while Medecins Sans Frontiere's Dignity picked up the dead.

More than 200 #refugees and #migrants float in a rubber boat as they try to cross to #europe some 12 miles off shore #libya. pic.twitter.com/L3D6bLXh00

Teigen and his team are just one part of a massive efforts underway in the Mediterranean to rescue desperate migrants seeking to reach Europe.

Jan Eriok Valen, an intelligence officer and crew member who also provided security for the operation which is part of the EU's Frontex border force mission in the region, described the panic that greeted him as he boarded the overloaded tanker during the initial rescue.

"It was chaos on the tanker. They were pushing us towards the only way off the boat, coming from everywhere and pushing for life jackets, arguing over them," he said.

"Then they came up from behind us and we had to call for back-up. Other police officers from the Siem Pilot joined us with riot shields... we were banging our sticks on pipes to make a lot of noise, and we had to hit a few of them."

Several of those who were rescued fainted during the operation and had to be dragged aboard the Siem Pilot.

"It was the craziest SAR I've ever experienced. At night-time, with a wooden boat, dinghies, people in the water, and a transfer from a tanker," said Valen.

One of the migrants passed a baby from a stricken inflatable launch into the hands of a rescuer.

The Siem Pilot team faced not just the extreme danger of the sea rescues but also had to contend with confrontational people traffickers.

'I wasn't aware of the risks'

"There was also a facilitator boat that was very aggressive all night. We used the ship's search light to scare it off but it was determined to try and retrieve the dinghies we had rescued the migrants from," said Teigen.

Following the night-time operation, conditions on board the dinghies deteriorated as temperatures soared and the crew was forced to stop any more migrants boarding the ship, according to an AFP journalist aboard the vessel.

Sitting in tight rows on the bridge of the ship, the migrants - mostly from sub-Saharan Africa along with a handful who said they were from Syria - had only a thin sheet of webbing to protect them from the baking sun.

Many of them used orange blankets to cover their bodies while their soaked clothes dried nearby.

Among the migrants were several young children, as well as entire families and some unaccompanied teenagers.

Scuffles broke out between some of the male migrants who had been rescued, prompting the captain to tell the men on the deck: "If you don't stop fighting I will disembark you from the boat!"

The number of people seeking to make the perilous journey has increased in recent weeks as migrants attempt to complete their journeys before winter brings treacherous conditions to the Mediterranean, limiting the opportunities for Europe-bound launches.

The Italian interior ministry said on Friday that more than 146,500 migrants had landed in Italy so far this year.

As many as 25 people are still missing, feared drowned after men on a Libyan coastguard speedboat attacked a packed migrant dinghy during a rescue operation on Friday off the north African state.

On board another rescue ship, the Aquarius, which is being operated by the SOS Mediterranee charity, recently rescued migrants spoke out Saturday about the horrors they had endured in an effort to reach Europe.

"I wasn't aware of what I would have to go through along this journey... But I promise I would never do this journey again," said a tearful 33-year-old migrant from Guinea.

Another individual, a 30-year-old from Ivory Coast who had just been rescued, added: "I would never advise to anybody to do the trip that I have done to arrive here. Even to my worst enemy, I would never tell him to do this. I wasn't aware of the risks when I decided to leave." Refugees
Up to 25 migrants feared dead off Libyan coast: NGO