Water shortages, heatwaves and open conflict have taken a toll on agriculture in the besieged enclave 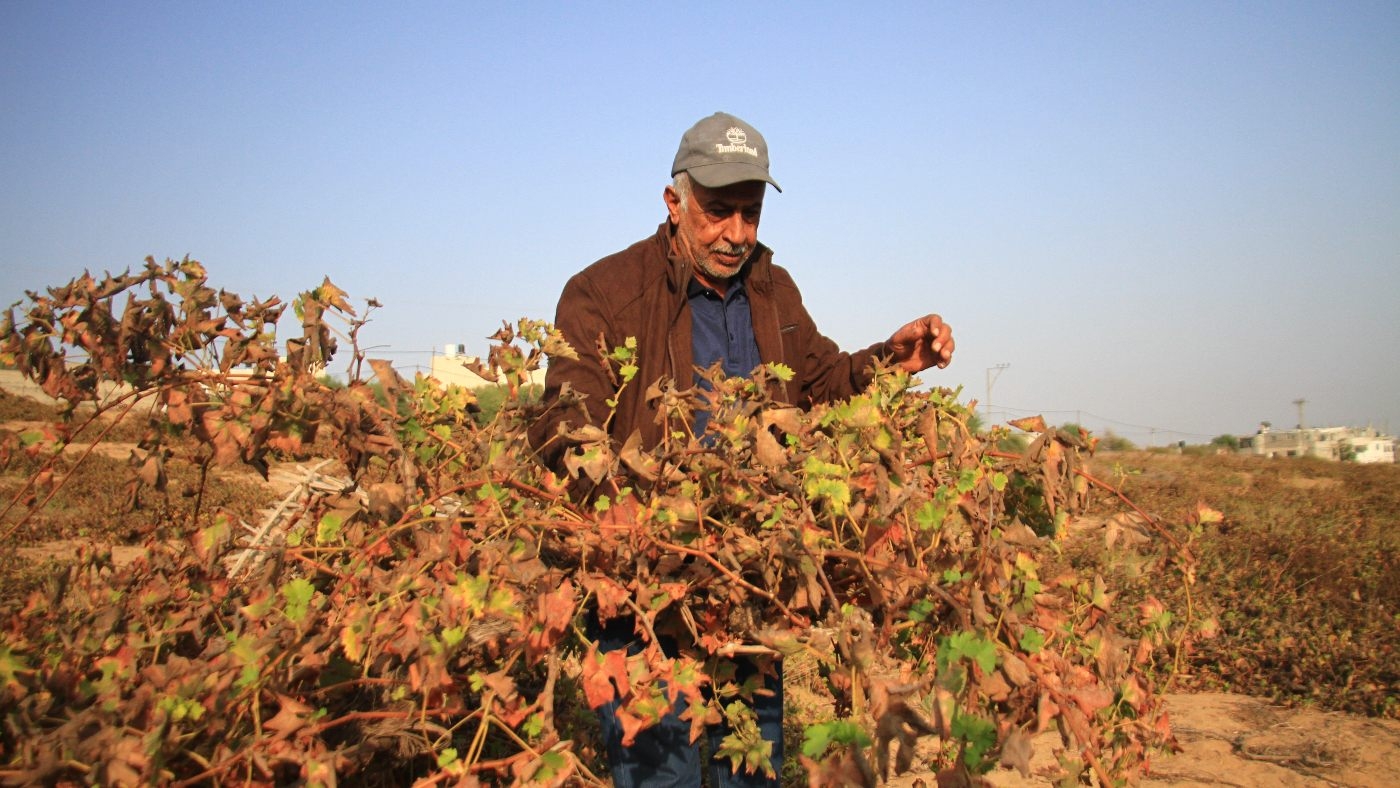 Ahmed Abu Saeed tried everything  to keep his six dunams (1.5 acres) of land planted with peach, plum and almond trees sufficiently irrigated this year - to no avail. 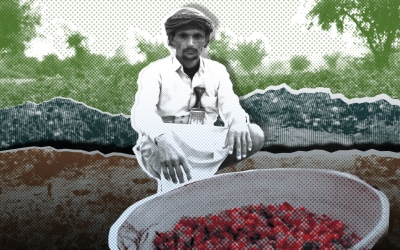 “Five years ago, this plum tree used to give around 300 kilogrammes of fruit in one season,” the 46-year-old Palestinian farmer told Middle East Eye. “But this year, all my land bore less than 50 kilogrammes of fruit because of the increase in temperatures, lack of rain, and the 11-day Israeli war.”

Abu Saeed is one of many farmers in the besieged Gaza Strip to have witnessed how agriculture in the Palestinian enclave has suffered in recent years due to the combined effects of climate change and the impact of the Israeli occupation.

Meagre harvests have made life more precarious for agricultural workers already struggling in the impoverished territory - and there are fears that the situation will only get worse.

“Rain and cold are critically important for my crops, which flower in spring. In March this year, hot monsoons came and harmed most of the flowers,” Abu Saeed explained. “Once I saw that, I knew that I would lose this season.”

Some crops have become much more difficult to cultivate in Gaza over the years because of climate change, he added, leading some farmers to abandon plums, peaches and almonds and replace them with other fruits and vegetables more able to withstand the changing weather conditions.

Salameh al-Qarnawi, 47, is facing the same dilemma as Abu Saeed. He rents 25 dunams (six acres) of land planted with olive trees and bore heavy losses this year because of climate change.

“Ten years ago, the total production of olives in my land was excellent; even the last five years were good,” he told MEE. “But this year is the worst in my life.

“My land produced approximately 75 to 75 percent less than the previous year,” Qarnawi added. “I lost 8,000 shekels ($2,573) this season: the production barely covers the cost of fertilisers and rent for the land.”

The coldest 40 days of  winter, which usually come around January, are crucial for olive trees to bear flowers, and later, fruit, the farmer went on to say.

‘Ten years ago, the total production of olives in my land was excellent; even the last five years were good. But this year is the worst in my life’

“January was a bit warm this year, so my olive trees did not flower well, and unusually cold days came in late February when olives trees flower,” the father of 12 explained while walking in his agricultural land near al-Bureij refugee camp in central Gaza.

Mohammed Abu Matwy, 63, has also seen his grapevines suffer from lack of rainfall on his 40 dunams (9.9 acres) of agricultural land near al- Nuseirat.

“Normally, the amount of rain during winter is enough to last the vines for all year, but it has only rained twice so far this season,” he told MEE. “I had to install an irrigation network and buy a fuel generator to water the trees at my expense.”

The cost of the generators came on top of the 22,000 shekels (around $7,000) that Abu Matwy said he already owed for fertilisers, even as his vines produced only 10 tonnes of grapes this year - five or six times less than usual.

“I do not have another choice because of climate change, otherwise the trees will die,” he added.

Fadel al-Jadba, director of the department of horticulture for the Ministry of Agriculture in Gaza, told MEE that there had been a noticeable decline in agricultural production in the past decade in the Palestinian enclave.

The effects of climate change on water resources in Gaza are stark. Last year Gaza saw no more than 30 rainy days, compared to 42 rainy days in 2018, according to Karam Al-Aour, an environmental specialist at the Water Authority in Gaza. 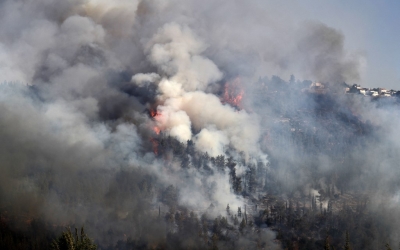 Why the climate movement must support the Palestinian cause
Read More »

“Although  the number of rainy days has decreased over the last few years, extreme weather events have increased - which means the amount of rain dropping in one day increases,” he explained to MEE. “This is a negative phenomenon because such high quantities of rain go to the sea and do not fill the aquifer, meaning the level of the aquifer then drops,” as it is unable to absorb large amounts of rainwater in a short timespan.

Global warming has considerably affected crops in Gaza, with some - such as grapes, olives, and guava - decreasing sharply in yield, while others better suited for hot summers and mild, dry winters, like dates, have emerged as an alternative, retired agriculture expert Nizar al-Wahidi told MEE.

“Climate change has also enabled agricultural pests to emerge in Gaza such as ceratitis capita and whiteflies, which were not present in the Strip a decade ago,” he added.

‘May God help me’

Adding insult to injury for Abu Saeed was the 11-day Israeli offensive on the Gaza Strip earlier this year.

The conflict, which started on 10 May, began when Israel launched airstrikes across the Gaza Strip in retaliation for rockets fired by Palestinian armed groups. Those rockets had been fired in response to an Israeli plan to evacuate Palestinians from their homes in the Sheikh Jarrah neighbourhood of East Jerusalem and attacks by Israeli forces on worshippers inside al-Aqsa Mosque.

The conflict killed 253 Palestinians, including 66 children, and injured almost 2,000.

During that time - which was harvest season for some of his fruits - the Palestinian farmer could not reach his land on the eastern edge of al-Bureij, located dangerously close to the fence separating Gaza from Israel.

Qarnawi also bore heavy losses due to the conflict.

“During the May war, I also lost around 2,000 Jordanian dinars ($2,820)  as I could not reach my land where I had planted vegetables east of al-Bureij,” he said. “When I went to my land after the ceasefire, I found that half of the vegetables were dry due to a lack of water. No one has compensated me yet.

“May God help me cover my sons’ and daughter’s costs.”

The latest significant bout of armed violence, however, is far from the only impact of the Israeli occupation felt by Palestinian farmers, 14 years into a crippling blockade of Gaza.

Abu Saeed has seen Israeli forces bulldoze his land three times over the last decade - a practice done by the army under the pretext of flattening terrain near the separation fence in order to give troops better visibility into the Palestinian territory.

“Climate change and the occupation are too much,” Abu Saeed said.

Even before the siege, Abu Matwy saw 130 dunams (32 acres) of land he cultivated with plums, peaches, almonds and citrus east of the village of al-Msader flattened by Israeli bulldozers in 2000, at the beginning of the Second Intifada. He received a paltry $1,400 in compensation. 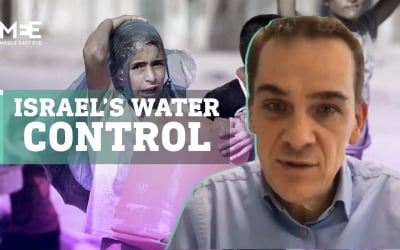 The siege has also had a dire impact on water supplies in Gaza, affecting agriculture.

“Salty and contaminated water kills many crops,” Jadba noted. “On top of that, the [Israeli] occupation intentionally sprays pesticides now and then to kill Gazan crops along the demarcation area.”

In addition to the effect of global warming, the aforementioned reasons “threaten the fragile food security and environment in the strip”, he explained.

Two out of three Gazan people suffer from food insecurity, and the tiny territory had a poverty rate of  53 percent in 2021, according to Samer Abd al-Jaber, the Palestine country director for the World Food Programme (WFP).

“Farmers are always the critical foundation to achieve food self-sufficiency - but in Gaza, we are a broken foundation,” Abu Matwy said bitterly. 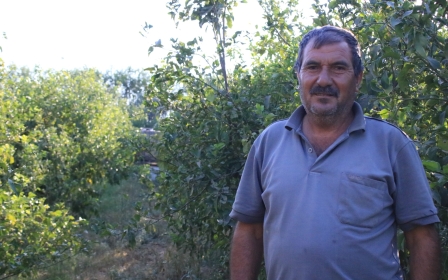 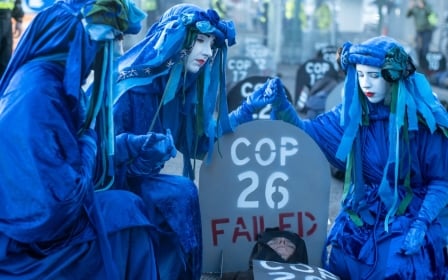 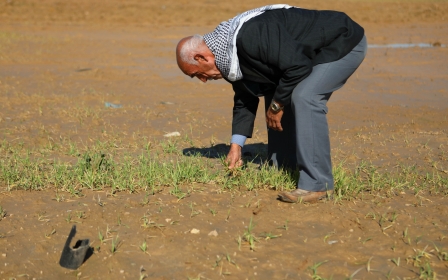