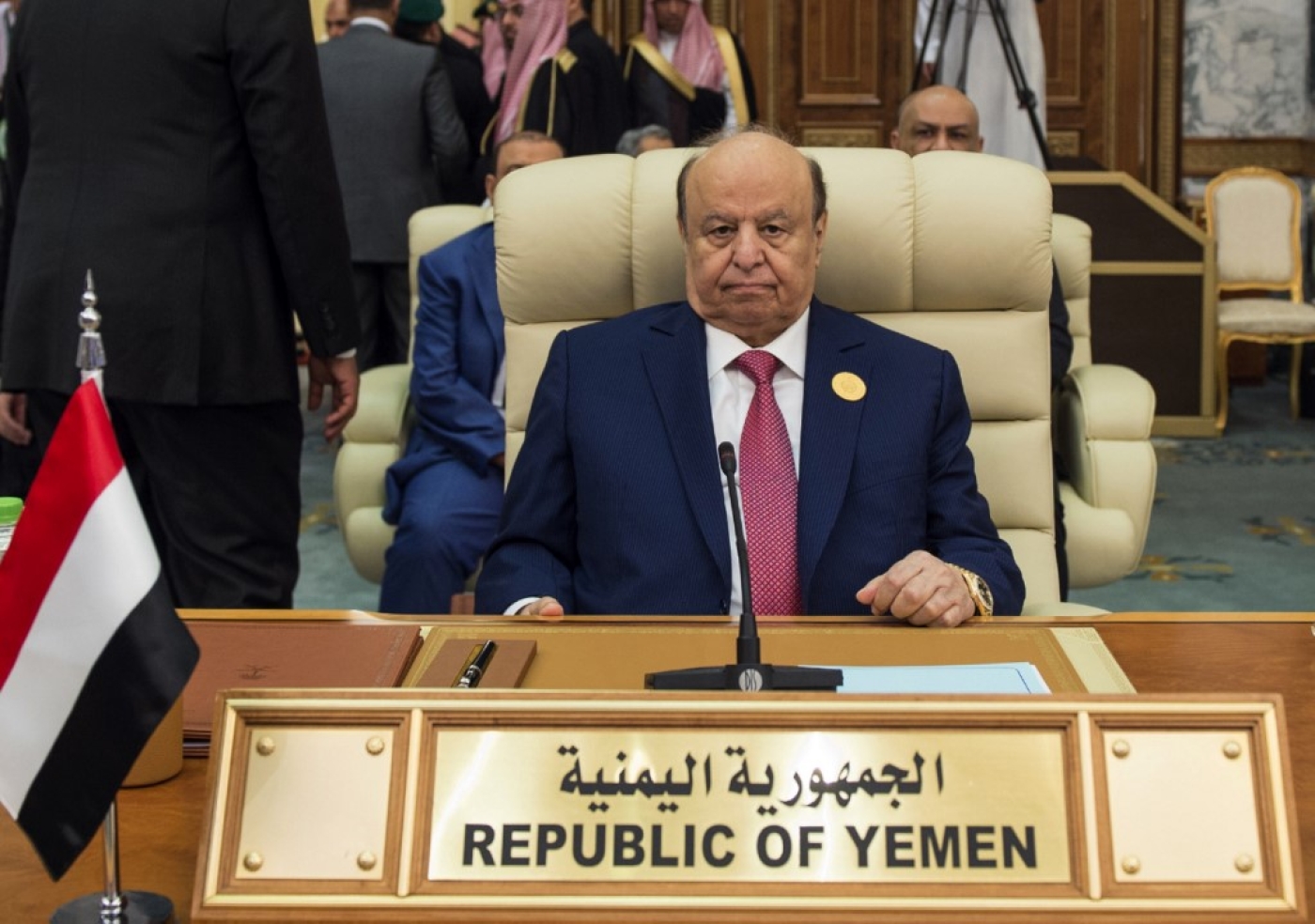 Five years ago, Yemen President Abd Rabbuh Mansour Hadi could count on a wide spectrum of political support around the country.

The Houthis had seized control of the capital Sanaa in September 2014 without a shot being fired and then, in January 2015, forced Hadi's resignation.

A month later, he rescinded the decision, and the one-time quiet and unassuming army general who had long played a deputy in the shadows to former president Ali Abdullah Saleh, had the backing of various groups, all focused on recapturing their country from the rebel group.

'Hadi is at his best incapacitated and arrested'

Over the intervening years, however, that support has dissipated with the 74-year-old politician facing criticism from all the corners he once counted on.

Some say Hadi is secretly aligned with al-Islah, seen as the Muslim Brotherhood's Yemeni branch. Others complain, given the fact that his government has been based in Riyadh since 2015, that he's a Saudi puppet.

Earlier this month, Tawakkol Karman, the Noble Prize-winning Yemeni human rights activist who was among those leading the country's 2011 protests, said Hadi no longer holds legitimacy.

“Hadi is at his best incapacitated and arrested, which makes him unaccountable, and makes his decisions non-binding for Yemenis as long as he is incapable and his freedom is restricted," she said in a speech.

While it’s not surprising that Hadi’s popularity has taken a hit after five years of war that has left more than 100,000 dead and the majority of Yemenis living in dire poverty, the consequences are significant for the ongoing conflict.

Forces loyal to him have been weakened and, as groups fight Hadi and each other rather than standing shoulder to shoulder against the Houthis, their battles are set to drag on even further into the future.

Long before he rose to power, Hadi, originally from the southern province of Abyan, was an army general in South Yemen, the former independent state which existed from 1967 to 1990.

He supported the former president of the south, Ali Nasser Mohammed, but in 1986, Hadi left the south for Sanaa after the defeat of his forces. Saleh became president with al-Beidh as vice president until 1994 when Saleh’s forces scuppered an attempt by his deputy to recapture the south.

Hadi was then appointed as al-Beidh’s successor, a position he held until 2012 when Saleh resigned.

Hadi, who was not very well known among Yemenis and had been nicknamed “Mrs Saleh” after years in Saleh’s shadows, became acting president and was then elected in a referendum.

He was supposed to stay in power for two years only, but his leadership has been extended until today.

Hadi's struggles began in early 2017 when splits emerged between forces loyal to him and those of the Southern Transitional Council (STC), a southern secessionist movement backed by the United Arab Emirates.

The STC accused Hadi of working under the supervision of the Islah party which the southern forces still condemn for supporting Saleh in the 1994 war against al-Beidh’s forces which led to the latter's defeat.

Hit by accusations that he was carrying out Islah's agenda, Hadi was seen as a traitor by the southern forces who attacked his fighters in Aden and surrounding areas.

“We fought with Hadi in the south and in the north and we liberated huge areas from the Houthis. We used to believe that he is the man for this period and he can lead the country,” Omar Mahmoud, an STC supporter based in Aden, told Middle East Eye.

“We found that Hadi can’t be a leader of the country as he was implementing the agenda of the Muslim Brotherhood in Yemen and he did not listen to the demands of the southern people.”

Many southerners lost confidence in Hadi, especially after the battles that broke out between forces loyal to him and the southern fighters last year.

“Hadi fought us in Aden and Abyan and he is not loyal to the south but to the Muslim Brotherhood, so he is our enemy," Mahmoud added.

"Now we have the STC that leads the south and we do not care about Hadi and his government."

But it's not just STC supporters who have pulled their backing from Hadi.

Since the death of Ali Abdullah Saleh in 2017, political parties in Yemen have been largely divided between supporters of the Houthis, those backing Tareq Saleh, the nephew of the former president, and Hadi’s backers.

While there have not been any recent, comprehensive nationwide polls assessing Hadi’s popularity, an informal survey by MEE of political figures previously loyal to Hadi suggests that most are now against him.

Ahmed Al-Azazi, a member of the Nasserist Unionist Party which opposes Islah and has battled the group’s fighters in Taiz over the last year, told MEE: “We elected Hadi in 2012 as a president for only two years but then the Houthis took over Sanaa and we supported him to continue.

“All anti-Houthi Yemenis were with Hadi in 2015 but then Hadi betrayed Yemenis and became a servant under Saudi Arabia.”

Hadi, his government and most high-ranking officials remain in Saudi Arabia and they only visit Yemen rarely out of fears for their safety.

Earlier this year, a Houthi court in the capital found Hadi and other officials guilty of treason and sentenced them to death, so there is no chance of him returning to Sanaa. He could return to run his government from other provinces, but unlike other ministers, has so far chosen not to.

“Hadi is not a president but a puppet in the hands of Saudi Arabia and he implements its agenda in Yemen,” Azazi said. “We as Yemenis should refuse Hadi at once.”

Azazi said that most of Taiz’s residents stand against Hadi as he allowed the Saudi-led coalition to destroy Yemen - and particularly to bomb Taiz - while he is silent in Saudi Arabia.

“Hadi gave the green light to Saudi Arabia to destroy Yemen and he can’t say no because he is in Saudi Arabia," he said.

“I will respect Hadi only if he returned to Yemen and really started to lead the battles against the Houthis. Otherwise, he will stay a puppet.” Currently, STC fighters in the south, Taiz residents and tribes in Marib, backed by Islah forces, are all fighting the Houthis.

Most recently, he noted, pro-Hadi forces withdrew from Al-Jawf province in northern Yemen, leaving tribal leaders to fight by themselves. Eventually, the Houthis took over the province.

“Hadi and the Saudi-led coalition betrayed Yemenis in several fronts and the last time was in Al-Jawf earlier this month, so Yemenis do not trust him anymore.”

These days, the Islah Party remains the only stronghold of support for Hadi. Most Yemeni officials serving in Hadi's government-in-exile are members of the party or affiliated to it, and they have remained loyal.

They are rejected by both the Houthis and the STC, so party leaders, most of whom are based outside the country, including in Turkey, feel they share their destiny with Hadi.

'Chaos is the alternative and Yemenis cannot agree over another person'

A source in the Islah party told MEE on condition of anonymity because he is not authorised to speak to media: “It is true that the Saudi-led coalition betrayed the forces in several areas, including Al-Jawf, but Hadi had nothing to do.

“No one can deny that the decisions are made by Saudi Arabia and not Hadi," he said. "But that does not mean Hadi is an enemy, but that he is in trouble.”

The source said Hadi called on Saudi Arabia to support him in Yemen in 2015, but the Saudis have since betrayed him and he is now stuck.

Hadi may be "only a puppet", he added, but the Islah party continues to back him because he is the leader with the most legitimacy, even if it’s flawed.

“Chaos is the alternative and Yemenis cannot agree over another person," he said.

Fadhl al-Rabie, a political analyst and head of the Aden-based Madar Strategic Studies Center, confirmed that many political forces supported Hadi in 2015 against the Houthis.

“Many forces supported the legitimate government and they fought shoulder to shoulder with it and sacrificed themselves for it,” Rabie told MEE.

But after a while, those forces stopped fighting the Houthis and turned their focus on the STC whose fighters had turned on him, with clashes breaking out in Aden between the STC and the forces of the Hadi government last summer.

“I believe there is a clear defect in the government’s legitimacy which appeared gradually during the last five years,” Fadhl added.

“That left a negative impact and people started to notice that Hadi's authority had flopped and the president himself became a big problem for the political solution.”

He added: “Many forces had a second thought and they noticed that Hadi can’t meet his commitments and that he gave into political forces from the beginning.”

Rabie said that the Islah party had “kidnapped” Hadi's office and are controlling his decisions. “The decision is not in the hands of Hadi, but in the hands of the Muslim Brotherhood and they use Hadi as an umbrella,” Rabie added.

“Muslim Brotherhood is an influential power in decision-making and they use Hadi to implement their policy.”

Without a clear vision or freedom to operate, Rabie said the country should pursue an initiative first pitched by then-US Secretary of State John Kerry in August 2016.

Under the Kerry proposal, the power now in Hadi's hands would be transferred to a vice president who was part of a broader unity government.

Alternatively, Yemen could form a presidential council which might also help break the impasse. Either way, he said, he believes Hadi should go.