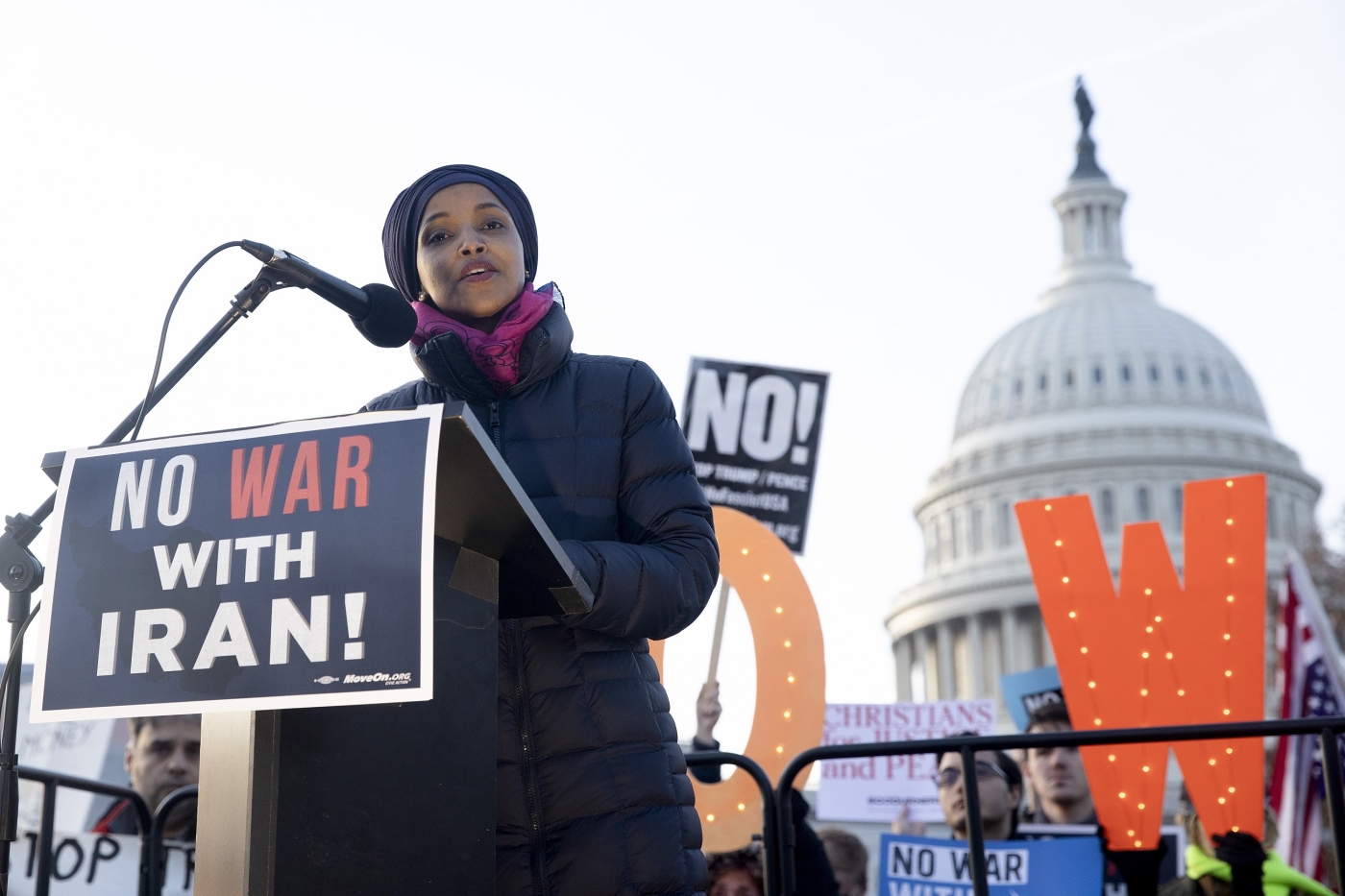 There are 435 members of the US House of Representatives, but only a few have the high name recognition of Congresswoman Ilhan Omar.

In less than two years, the Minnesota Democrat has faced more scrutiny than many of her colleagues who have been in Congress for decades.

A black woman in a hijab with seemingly no reservations about challenging the status quo, the freshman representative has quickly become a heroine for many Muslim Americans, Palestine solidarity activists and progressive Democrats.

Her headline-producing bold takes, from rebuking the pro-Israel lobby, AIPAC, to questioning US policy in Venezuela have also earned her many enemies.

'The letter goes into details about all aspects of the arms embargo and 'Iranian malign activities', and even though it's spearheaded by a Democrat, it's very sympathetic to the administration's talking points'

Still, in the latest controversy Omar is facing outrage from her own base.

The congresswoman is facing backlash for signing on to a letter urging the Trump administration to extend a UN arms embargo against Iran.

While the letter is non-binding and was signed by more than 380 House members, Omar's name on a document perceived as hawkish - at a time when she has been calling for lifting sanctions against Iran - irked a section of the congresswoman's supporters.

Adding to the outrage was the fact that the letter was backed by AIPAC and featured on its legislative agenda. It was also authored by House Foreign Committee Chair Eliot Engel and ranking member Michael McCaul - both of whom are hardliners when it comes to Iran policy.

"I definitely think that it's warranted for her to be held accountable and for people to express their disappointment in her action - especially for those of us who literally put ourselves on the line over the past year and a half to defend her and show her support at our own expense," said Jinan Shbat, national organiser at the American-Arab Anti-Discrimination Committee (ADC).

The congresswoman's supporters stress that the letter merely calls for prolonging an existing ban on Iran's weapon purchases, and even if it was bad optics, it does not cancel Omar's advocacy for balanced foreign policy and social justice issues in Washington.

"It's important to make sure that if we feel like our friends in politics are not getting it right to try to give them the benefit of the doubt and give them advice and a chance to clarify things," said Muslim-American political activist Ahmed Bedier.

Bedier acknowledged that Omar's support for Engel's letter "can look bad", but said it does not deserve the backlash that ensued on social media. He also accused media outlets of "sensationalising the situation" by over-emphasising the AIPAC connection.

The outrage started following a story in Al-Monitor that first noted Omar's signature on the letter. Another headline followed in the Electronic Intifada. Then, Fox News and some Israeli media outlets picked up the story.

Omar's office told Al-Monitor that Omar's backing of the letter was consistent with her longstanding support for "arms embargoes against human rights abusers".

'They're looking to actually chip away at her own supporters and divide her supporters. And that's what this firestorm is doing. Anything against Ilhan Omar, they'll support it, even if it's coming from their own enemies'

In February, the congresswoman introduced a foreign policy legislative package, including a bill that would prohibit arms sales to countries engaged in human rights violations.

However, the letter's call for expanding and enforcing travel restrictions against a list of Iranian individuals described as "dangerous actors" does not seem consistent with the congresswoman's stance against sanctions.

"Iran's illicit transfers of weapons directly contribute to some of the most destabilising threats to the United States and our partners in the Middle East such as Israel and the Gulf States," the document says.

That passage also appears at odds with Omar's criticism of Washington's ties to Israel and the Gulf States, namely Saudi Arabia.

The Anti-War Committee, an activist group based in Omar's home state of Minnesota, called on the congresswoman to withdraw her signature from the letter and requested a virtual meeting with her to discuss the issue.

"Prior to this, we thought we understood your positions and were generally supportive of them, but now we are concerned that you might be willing to sacrifice your politics in order to be perceived as more 'moderate' on the campaign trail and more acceptable to Zionist voters," the group said in a statement addressed to Omar on Wednesday.

In May 2018, President Donald Trump pulled the United States out of the multilateral nuclear agreement with Iran, which saw Tehran scale back its nuclear programme in exchange for lifting sanctions against its economy.

Since then, Washington has been imposing crippling sanctions on various sectors of the Iranian economy as well as against dozens of individuals, including Tehran's Foreign Minister Mohammad Javad Zarif.

The nuclear deal, known formally as the Joint Comprehensive Plan of Action (JCPOA), had put a five-year sunset clause on an existing UN arms embargo against Iran that is set to expire in October.

UN Security Council Resolution 2231, which endorsed the JCPOA after its completion in 2015, explicitly grants Iran the permission to import and export conventional weapons within five years of the nuclear deal's implementation. Now Washington wants to trigger a snapback mechanism within the deal to reimpose sanctions on Iran and extend the embargo, despite having abandoned the agreement two years ago.

Russia and China, which are permanent members of the Security Council, are likely to veto a US attempt to lengthen the UN arms embargo.

A statement by Engel accompanying the congressional letter on Monday emphasised the need for relying on diplomacy to renew the ban on arms sales to Iran.

"This letter, supported overwhelmingly by both parties in the House, represents an imperative to reauthorise this provision - not through snapback or going it alone, but through a careful diplomatic campaign," said Engel, who is a Democrat.

The letter itself does not acknowledge the dangers of a forceful approach that might destroy what is left of the nuclear deal and worsen a crisis initiated by Trump when he nixed the agreement on his own.

Marcus Montgomery, a fellow at the Arab Center Washington DC who tracks congressional affairs, said it was "confusing" that Omar would give legitimacy to the letter. He added that the congresswoman has been an "effective" voice for the progressive argument against sanctions.

Earlier this year, Omar was among the first legislators in Washington to call for lifting US sanctions against Iran to allow the Islamic Republic to deal with the coronavirus pandemic.

"And now she's signed onto a letter that is almost supportive of the administration's policy. I mean the letter goes into details about all aspects of the arms embargo and 'Iranian malign activities', and even though it's spearheaded by a Democrat, it's very sympathetic to the administration's talking points," Montgomery told MEE.

'The jump from disagreeing with her decision to then completely writing her off, accusing her of being a fraud or claiming that she is succumbing to certain lobbies is just bizarre - and counterproductive'

Still, Trita Parsi, executive vice president of the Quincy Institute for Responsible Statecraft, who is a prominent advocate for diplomacy with Iran, came to Omar's defence on Wednesday, saying he was "distraught" by the Twitter backlash against her.

"Although I may have disagreements with this particular letter, she is consistently in favor of ceasing arms sales to the Middle East and to human rights abusers," Parsi wrote on Twitter.

"But the jump from disagreeing with her decision to then completely writing her off, accusing her of being a fraud or claiming that she is succumbing to certain lobbies is just bizarre - and counterproductive."

Ali Abunimah, the co-founder of the Electronic Intifada, also pushed back against the attacks directed at Omar, despite what he called her "terrible decision" to sign the letter.

"Some reactions I've seen that she's 'sold out' or 'controlled opposition' etc. just empower our enemies," he wrote. "I urge Omar to explain/rescind her decision. Let's criticise her errors, but encourage good work she's does [sic]."

For his part, Bedier, the political activist, said AIPAC and right-wing media outlets are trying to exploit the situation.

"They're looking to actually chip away at her own supporters and divide her supporters. And that's what this firestorm is doing," he told MEE.

"Anything against Ilhan Omar, they'll support it, even if it's coming from their own enemies."

Still, Shbat of ADC said AIPAC's connection to the letter should not be dismissed. A few months ago, the pro-Israel group ran ads comparing Omar and her House colleagues Rashida Tlaib and Betty McCollum to the Islamic State (IS) group.

Shbat denounced the personal attacks against Omar, but said criticism that is specific to signing the letter is legitimate.

"She does not represent all the Muslims in America, all the Somalis or all the refugees, although a lot of people do look up to her, and obviously it was monumental when she took office," Shbat said.

"However, being a member of Congress also means that you will be held accountable for the decisions that you make," he added.