The mass shooting at an Istanbul nightclub on New Year's Eve was carried out professionally with the involvement of an intelligence organisation, Turkish Deputy Prime Minister Numan Kurtulmus said on Monday.

"It appears the Reina attack is not just a terrorist organisation's act, but there was also an intelligence organisation involved. It was an extremely planned and organised act," Kurtulmus said during an interview with broadcaster A Haber.

'It appears the Reina attack is not just a terrorist organisation's act, but there was also an intelligence organisation involved. It was an extremely planned and organised act'

Islamic State has claimed responsibility for the attack in which 39 people were killed, saying it was revenge for Turkish military involvement in Syria. It marked the first time it has ever clearly claimed a major attack in Turkey despite being blamed for several strikes including the Istanbul airport bombings.

Turkey has already arrested two Chinese nationals of Uighur origin in connection with the shooting.

The suspects, named as Omar Asim and Abuliezi Abuduhamiti, were arrested on charges of "being members of a terrorist organisation", of "purchasing unlicensed firearms" and "being accomplices to the murder of 39 people", state-run Anadolu Agency cited a prosecutor as saying.

A witness in the central Anatolian city of Konya had reportedly seen Asim with the Reina nightclub attacker, the agency said late Friday.

The gunman remains at large despite a massive manhunt.

Officials said last week the attacker was likely a Turkic Uighur, with authorities reportedly looking into the possible existence of a cell, including other militants from Central Asia.

Uighurs are Turkic-speaking Muslims from the restive Xinjiang region of far-western China.

The killer, reportedly known by the code name Ebu Muhammed Horasani, slipped into the night after mowing down 39 revellers at the Reina nightclub just 75 minutes into 2017. 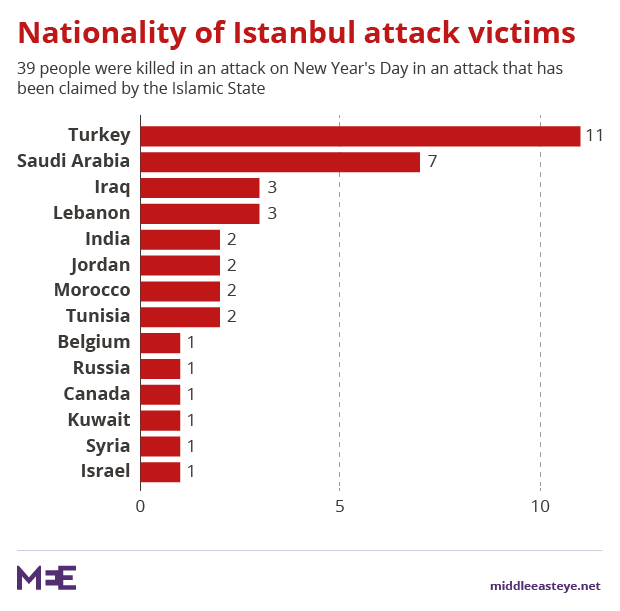 At least 35 people have been detained so far in connection with the attack, according to Anadolu.

Of the 39 killed in the glamourous nightclub on the shores of the Bosphorus, 27 were foreigners including citizens from Lebanon, Saudi Arabia, Israel, Iraq and Morocco.