Incoming president may not thwart efforts to revive the JCPOA, but broader US engagement with his administration is improbable 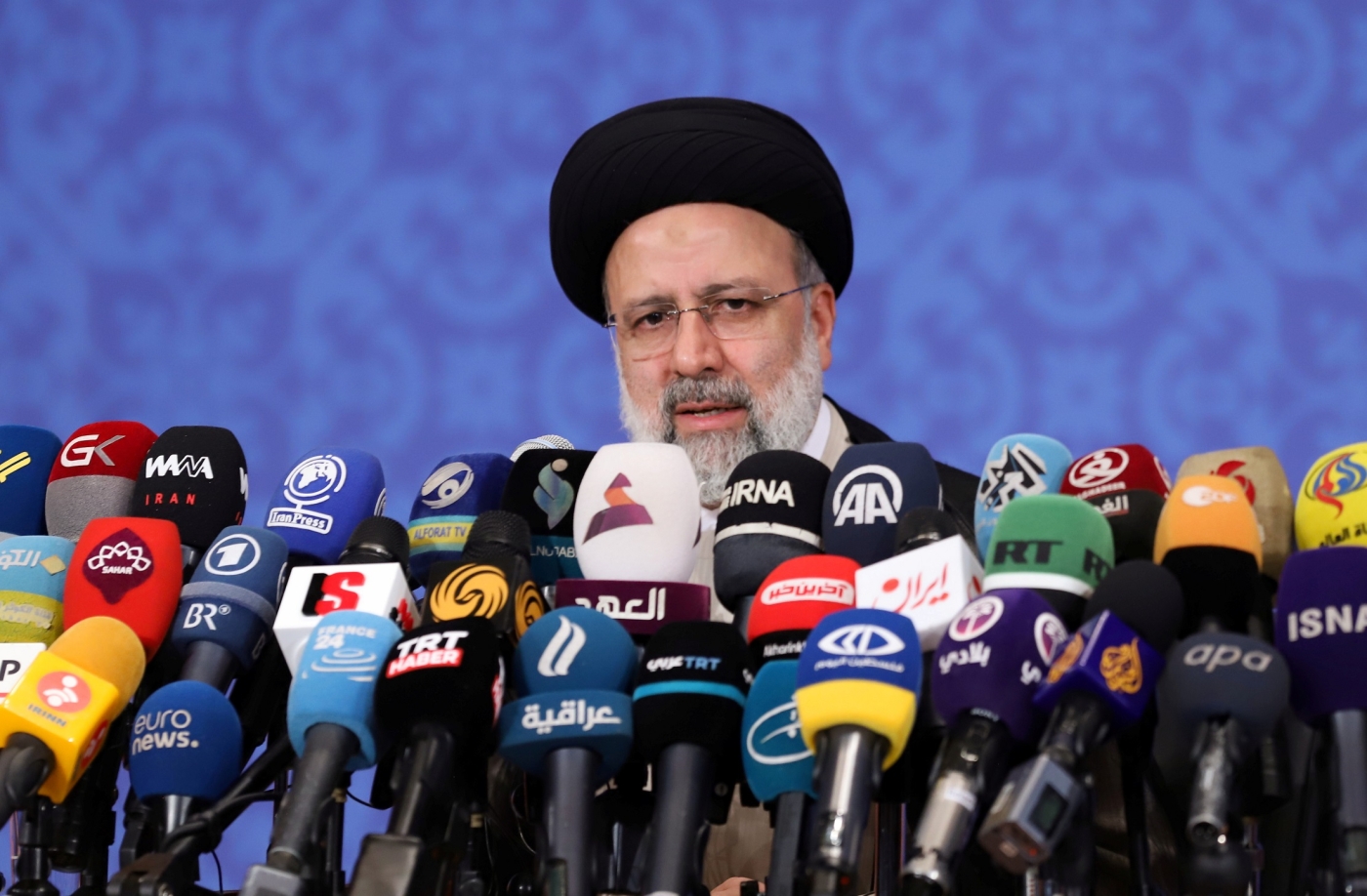 With seemingly 100 microphones set in front of him, Iranian President-elect Ebrahim Raisi announced himself to the world on Monday, taking on a combative tone against Washington and ruling out meeting with US President Joe Biden.

Descriptions like "ultra-conservative" and "hardliner" preceded Raisi's name in global headlines. The former judiciary chief was elected with ease last week in a contest that appeared engineered to guarantee the outcome - with many serious contenders barred from running.

With uncompromising rhetoric and a history of human rights abuses, including allegedly playing a role in a mass execution campaign in the late 1980s, Raisi's victory was a blow to advocates of diplomacy between Washington and Tehran.

"It's hard to find much to celebrate about last week's elections for those of us who support better relations with the Islamic Republic of Iran," said Barbara Slavin, director of the Future of Iran Initiative at the Atlantic Council, in opening remarks at a virtual panel discussion on Monday. 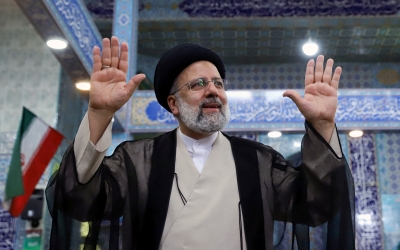 Despite Raisi's ascension to the presidency, experts and US officials say the immediate order of business in engagement with Iran - reviving the nuclear deal - is unlikely to be shaken by the new administration in Tehran, which does not take office until August.

Iranian and American diplomats have been conducting indirect talks in Vienna to restore the agreement, formally known as the Joint Comprehensive Plan of Action (JCPOA).

Whether or not the talks lead to an agreement over the path to reviving the deal before August, Raisi is unlikely to derail the diplomatic efforts. Supreme Leader Ali Khamenei, who has the final say on the nuclear programme, has endorsed the negotiations to secure sanctions relief.

"Raisi, even though he comes from the camp that was very much vocal against the nuclear deal, the JCPOA, he has been signalling publicly that he would support the deal," Negar Mortazavi, an Iranian-American journalist and analyst, said at a webinar organised by the National Iranian American Council (NIAC) on Monday.

"So I think that continuity is something we can expect when it comes to the JCPOA."

Beyond the nuclear deal, however, Raisi's politics, as well as his own past that is tainted by rights abuses, make it more difficult for the West to engage on broader issues with Iran under his presidency.

The multilateral deal, which former US President Donald Trump nixed in 2018, saw Iran scale back its nuclear programme in exchange for lifting sanctions against its economy.

After Washington withdrew from the deal, Tehran downgraded some of its commitments to the accord and started to enrich uranium well beyond the limits set by the agreement.

Biden and his top aides say they are seeking to reimplement the deal through mutual compliance and then strengthen some of its provisions and use it as a platform to address other issues with Iran. 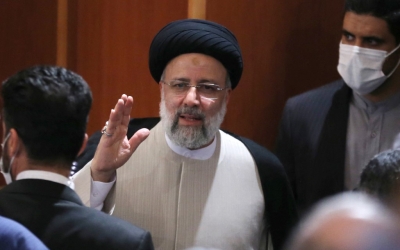 "Anything beyond the JCPOA - on the nuclear programme or issues other than the nuclear deal, regional policy, the missile programme and other issues that both the Americans and also Europeans are interested to discuss with Iran is going to be complicated and more difficult with a hardline president and possibly a hardline foreign minister," Mortazavi said.

"That Ebrahim Raisi has risen to the presidency instead of being investigated for the crimes against humanity of murder, enforced disappearance and torture, is a grim reminder that impunity reigns supreme in Iran," Amnesty International’s Secretary General Agnes Callamard said in a statement on Saturday.

"In 2018, our organization documented how Ebrahim Raisi had been a member of the ‘death commission’ which forcibly disappeared and extrajudicially executed in secret thousands of political dissidents in Evin and Gohardasht prisons near Tehran in 1988."

This record makes Raisi an unsavory partner in any possible negotiations, analsysts say.

"He carries the burden of the past with him in a way that will define the future - because of what we'll hear a lot more about I think in the coming year, and that's his role in the 1988 massacre that will limit everyone in the world, or at least in the West, in dealing with his administration," Robin Wright, a journalist and author, said at a panel discussion organised by the Wilson Center on Tuesday.

But the wheels for reviving the JCPOA have been set in motion well before Raisi's election with negotiators, concluding their sixth round of talks in Vienna last week.

Speaking at the Atlantic Council webinar, Azadeh Zamirirad, a political scientist, said while Raisi will not pull the plug on a possible return to the JCPOA, his government may pose challenges at the implementation stage.

"It's in fact really unlikely that Raisi would come and toss out the nuclear agreement out of the window altogether. I think nobody is expecting that. He doesn't have the power to do that autonomously anyway, and there seems to be a systemic consensus when it comes to the agreement," Zamirirad said.

"Where we might see some differences in the future, however, is with regard to implementation. Bear in mind that Raisi now as a president will not back the nuclear agreement the way that [outgoing President Hassan] Rouhani has been backing it."

US plays down Raisi's impact

For all the concern about Iran's own future with hardliners fully in charge of all the centres of power in the country, the Biden administration has not sounded the alarm about the prospects of worsening relations with Tehran.

On Sunday, US national security adviser Jake Sullivan played down the impact of Raisi's victory on efforts to revive the nuclear deal, asserting that Iran's supreme leader, not the president, controls the nuclear file in Tehran. 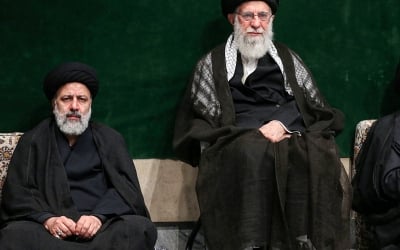 "The ultimate decision for whether or not to go back into the deal lies with Iran's supreme leader and he was the same person before this election as he is after the election," Sullivan told ABC News.

He also reiterated the administration's position that diplomacy is the best way to address Iran's nuclear programme.

"Our paramount priority right now is to prevent Iran from getting a nuclear weapon," he said. "We believe that diplomacy is the best way to achieve that, rather than military conflict."

White House spokeswoman Jen Psaki echoed that message on Monday, dismissing Raisi's assertion that he would not meet with Biden.

"We don't currently have diplomatic relations with Iran or any plans to meet at the leader level, so it's unclear that anything has actually changed on that front," Psaki told reporters.

"I will say that the president's view and our view is that the decision maker here is the supreme leader. That was the case before the election, is the case today, will be the case probably moving forward." 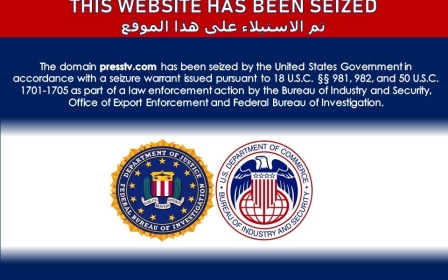 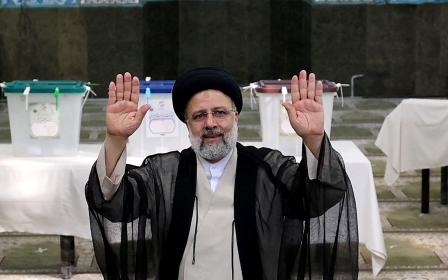 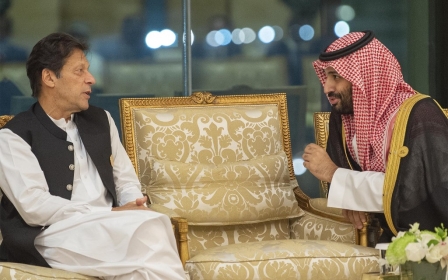